This week’s Ratalaika release is Clash Force, a run and gun shooter in the vein of Contra. It was originally a phone game but the only real evidence of that is that one of the two settings in the options menu is to mute the game (the other is language). Beyond that there’s a basic tutorial otherwise you can jump into the single player campaign. 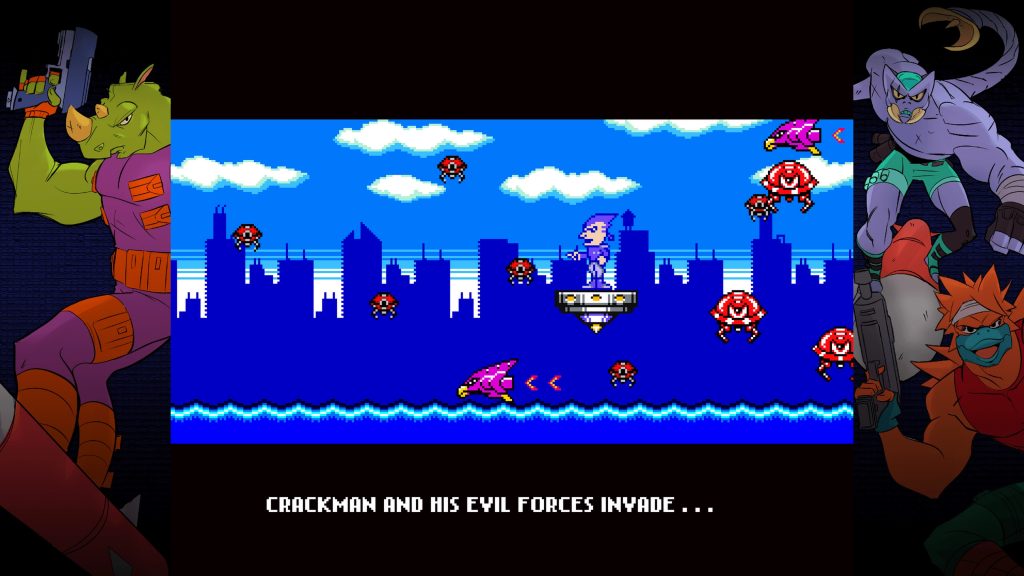 A Dr Wily-type character called Crackman is trying to take over the world and so the Clash Force must defeat him. That’s it for story, which is fine, there’s no need for it in this type of game. The Clash Force team is made up of three characters, each a humanoid form of an animal. You can play as any of them but it makes no difference to the gameplay.

As the Contra comparison might suggest you run to the right on a 2D plane whilst doing some light platforming and shooting anything that gets in your way. You can jump, tap

to shoot or you can hold

for rapid fire. At set points new weapon types might float into the level but you have to shoot them down in order to collect them. Your basic gun is a single, straight shot but upgrades increase this to two, three or five shots. It’s not a gradual process, you get whichever weapon you pick up, including going backwards if you pick up a weapon with less shots.

There are a couple of guns with two shots so I’m not sure if each gun has a different power as most enemies die in one shot regardless of the weapon. You do lose the power up if you get hit however, unless you have a one-hit shield which can be found within levels. You have three hearts to make it through the stage otherwise you have to start it over again, but you get infinite retries. Levels tend to be short as well, so checkpoints would be redundant. 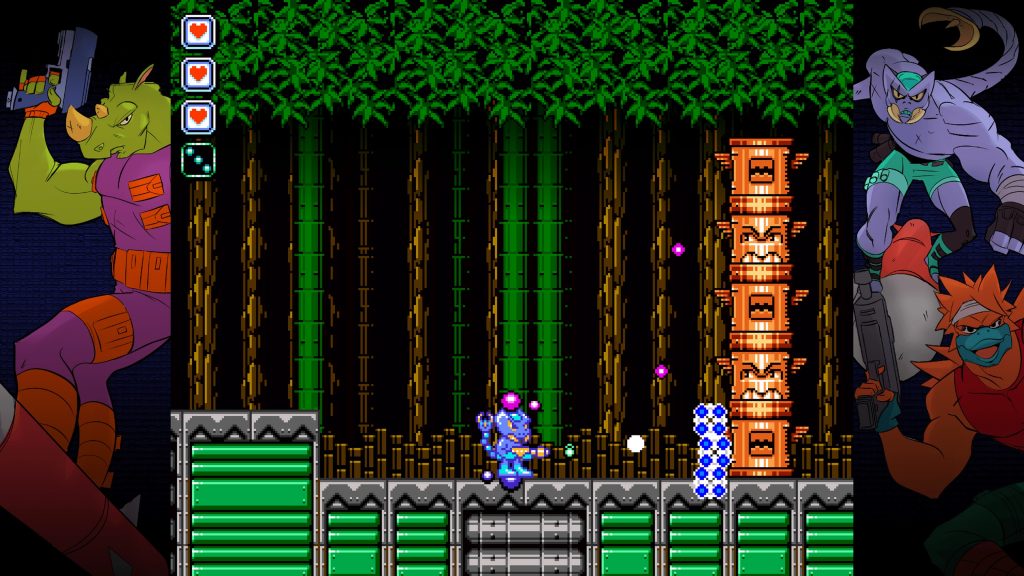 There are twenty-one levels altogether, four worlds with three levels each culminating in a boss stage before you get a few more stages leading up to the final boss. Visually the worlds are quite different, though obviously retro inspired, and you get the odd stage which adds a gimmick, like riding on a rail throughout the whole level. You see the same enemies throughout and as I stated bar the odd, usually unique, enemy most things die in one hit. Each level ends with a Bonus Stage but this just allows you to jump into a stream of power ups to get a random one.

The bosses are pretty simple with set-ups that will appear familiar to those who have played Mega Man games before. Crackman will be in some sort of device either shooting at you or moving around the screen, or both. You simply have to put enough damage on him to progress. The patterns aren’t very complex, but he is a fan of shooting things into the sky and them just randomly falling onto the play space with no indication of where they are coming from or where they’re going to land. They move quick enough that reacting isn’t really an option either so I ended up just going for damage and hoping I was just stood in a safe place. 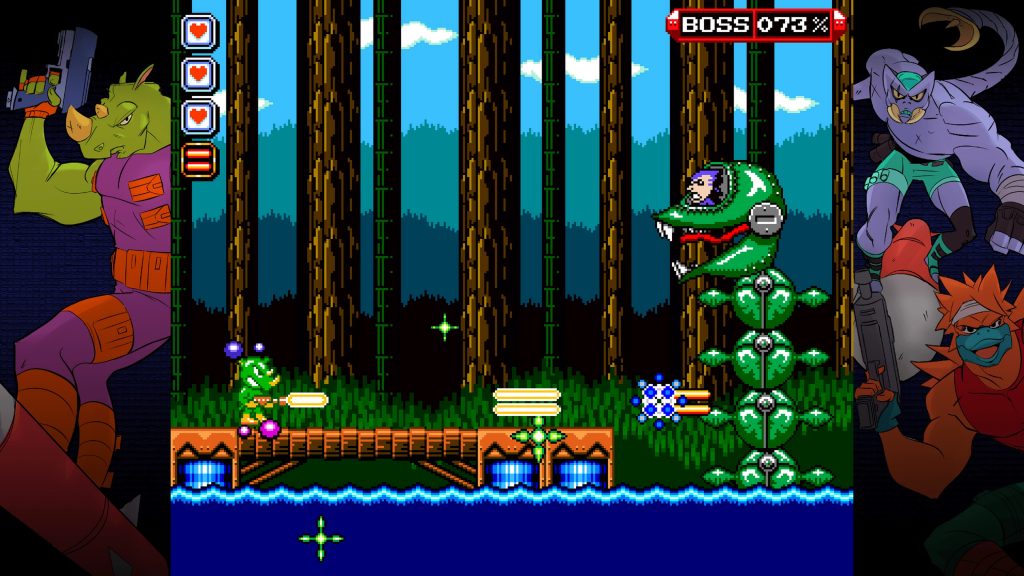 On the default Normal difficulty Clash Force is pretty easy. I didn’t realise you lost your power up when you got hit for multiple levels as I didn’t get hit. Being a Ratalaika release you’ll have the platinum by the fifteenth level which took me about fifteen minutes from starting the game. However it was from that point on that things actually got a little tougher, but not due to good design but thanks to unpredictable randomness which made progressing reliant on luck as much as skill. I had the whole game completed in under forty minutes.

There are two more difficulties to choose from however and you can select them from the outset if you want a challenge. Hard mode is only subtly different. You still have three hearts but certain environmental hazards have added complications and maybe enemies moved faster or shoot faster and possibly there were less power ups littered around. It was hard to tell. Expert knocks your hearts down to two and possibly ups enemy movement speed again. I’d assume bosses were more aggressive as well, but without a direct comparison it’s hard to tell. The higher difficulties were more challenging though. 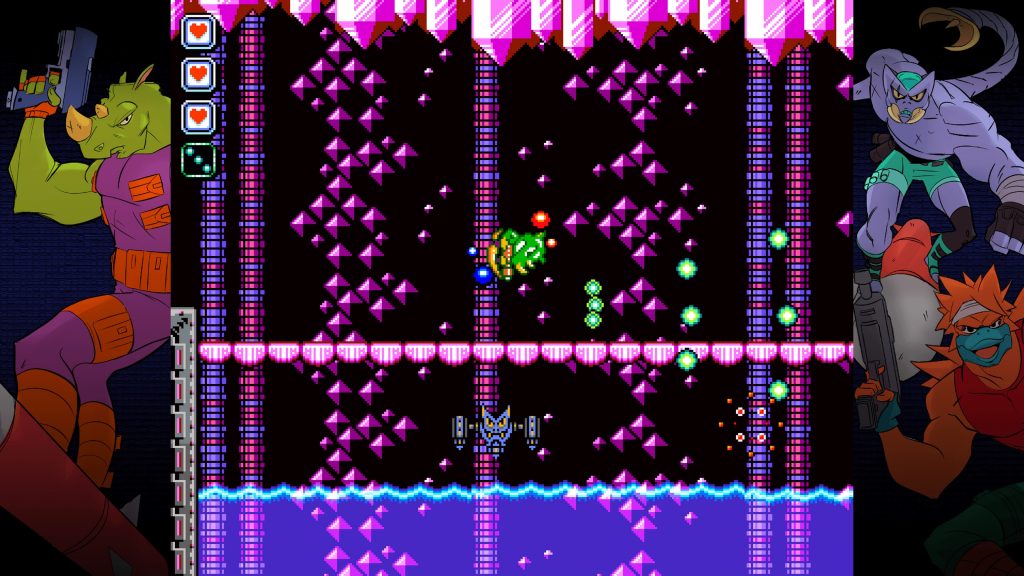 Ultimately Clash Force is a very forgettable experience unfortunately. I’d only just finished playing through it before I started writing this review and I’ve had to turn it on again to remind myself of certain things because the experience is already fading from my mind. It’s serviceable as you play through it, I’ve had a worse time with similar titles that Ratalaika have applied the easy platinum treatment to, but there is little here to make it stand out from free-to-play titles you’d find on Newgrounds or somewhere like it.

Clash Force
5 Overall
Pros
+ Perfectly playable
+ Multiple difficulty settings
+ Easy platinum
Cons
- Three characters are all the same
- Easy on default setting
- Relies on randomness to add challenge
- Over in well under an hour
Summary
Clash Force is another Ratalaika release which offers an easy platinum. It's a brief and ultimately forgettable experience but you'll get some entertainment from it whilst it lasts.