Home » Reviews » PS4 » A Summer with the Shiba Inu

Now I’ve done it. I’ve opened the Pandora’s box on visual novels now and another one has been sent my way. It’s not a genre I’ve ever been enamoured with but at least A Summer With the Shiba Inu offers a decent mystery on paper. It’s a genre where the writing has to to all the work.  At 70,000 words, Quill Game Studios are putting the work in.  Hopefully the length of this tale would feel substantial and maintain my interest. 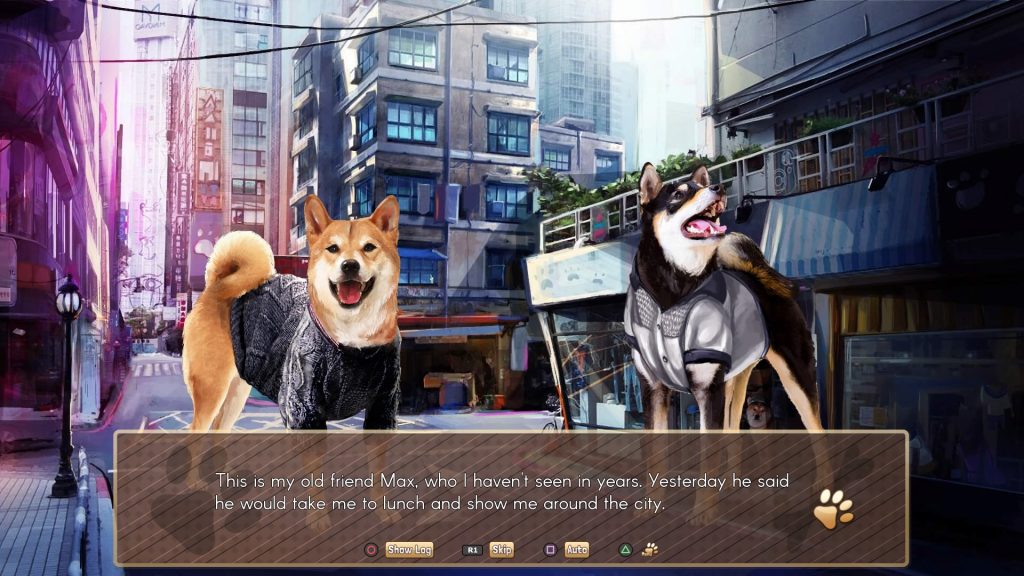 A Summer with the Shiba Inu‘s story is one that begins in a straight-forward enough manner. At least, as straight-forward as a story about a world inhabited by dogs can be. Syd is our main character. He’s returned from overseas to look for his missing brother. The dogs, which may be featured on a breed lists with basenjis, might as well be facsimiles for human beings so, at least at the beginning, it’s a story you can relate to.

Then, as most visual novels tend to do, it takes a turn. Characters come out of the shadows to enhance the mystery surrounding the disappearance. There’s a nice element of cloak and daggers about it but the espionage soon gives way to a fantasy regarding alternative realities. You see, Syd is special. He, and many other dogs have pendants and they all compete in a military style murder quest. Syd’s a literal top dog at this virtual purge but has also doesn’t have a clean conscience.

It gives the Shiba Inu an undercover, militant feel that intrigued me. Unfortunately, it’s not really cashed in. Partly, my problems stem from how Visual Novels choose to portray action. You can bash two portraits together like they’re action figures and that’s it. Meanwhile it’s paced glacially as the narrative and dialogue slowly describe what’s effectively a punch-up. I can’t get excited for it. 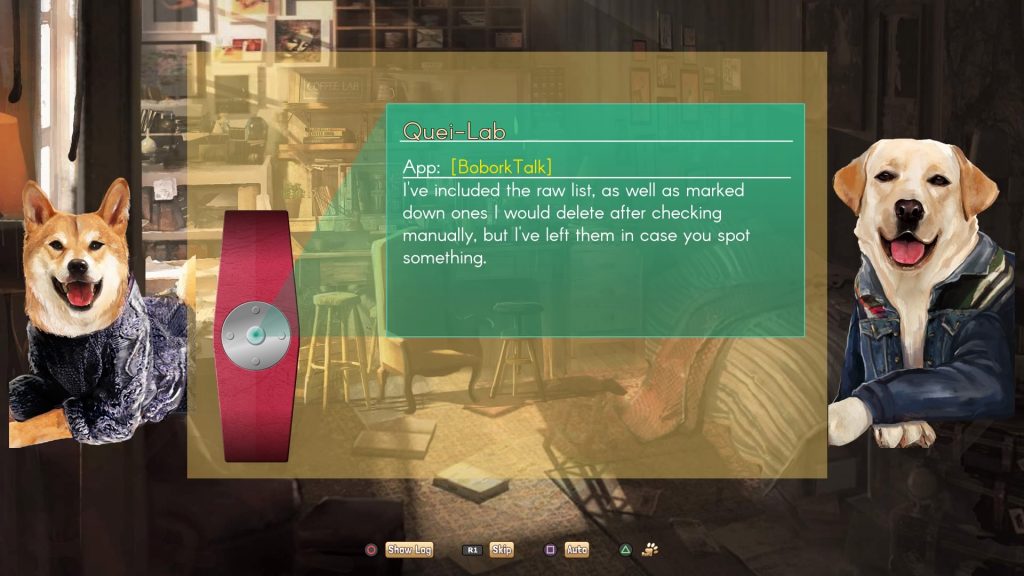 I like spy fiction but the mystery of A Summer With the Shiba Inu seemed more keen on delving into the alternative realities than fleshing out a dog’s disappearance. Once the focus shifted, I became disinterested. It doesn’t help that none of the characters really struck a chord with me. Maybe it’s because of the canine cast but, bar Syd, I couldn’t really connect with any of them. It’s a shame because Syd has a decade’s worth of baggage to explore.  It’s actually well told with some moments of darkness between these cheery dogs but, I couldn’t quite get a grip on it.

It’s not a large cast with them all distinguished in appearance.  I find that the dogs that support Syd follow the same kind of personality and they’re fairly accommodating for Syd’s plight.  There’s not much in the way of conflict which makes their interchanges a little bland.  I would’ve liked more in the way of obstacles but it’s clear the narrative was more interested in examining our protagonist’s troubled past.  It’s well done but it means the main mystery doesn’t face many trials and tribulations before the curtain closes. 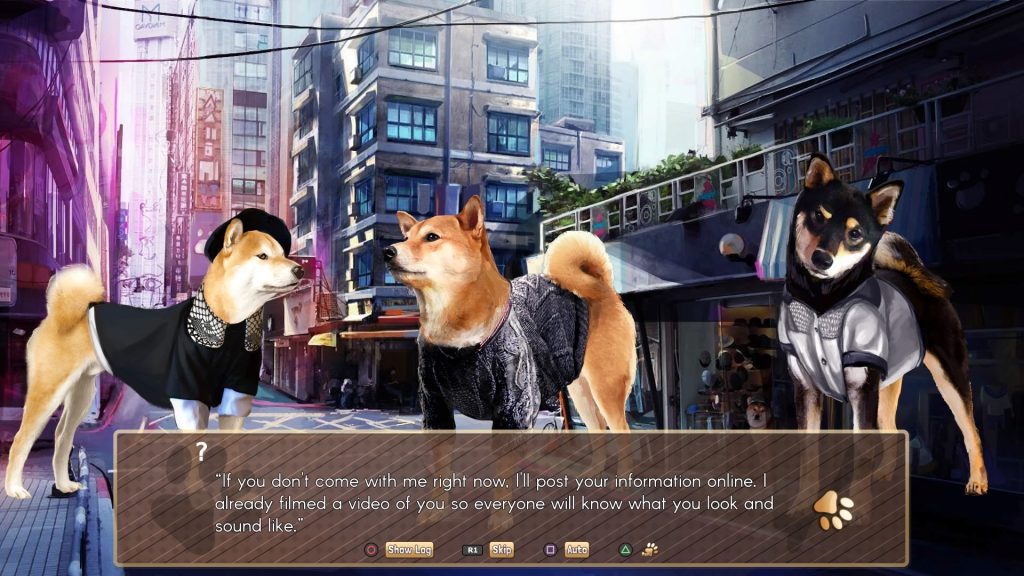 I feel like the ARIna fights present some problems with the game’s pacing. As I’ve said, it doesn’t present action well and these scenes feel like the longest diversion from the parts I’m interested in. When you take away these flashbacks, you’re left with a very short chase towards a final destination.

To the game’s credit, the writing doesn’t take itself too seriously. There is a litany of awful dog puns that lighten the mood and there’s always time for a joke. Maybe I glossed over it but I felt the game could’ve done with more character building. The pursuit after Syd’s brother serves the backbone of the plot but, despite being siblings, I didn’t get a lot of reminiscing from Syd. Considering how many flashbacks are used to service the action sequences, it would’ve been nice to see the relationship fleshed out.

That feels like a problem across the board. You’re only really getting one sidekick at any one time. Max fades off into the background once the chase kicks into gear and any other characters feel very peripheral. You could maybe consider it focused but I couldn’t really get invested in this world that was put together. 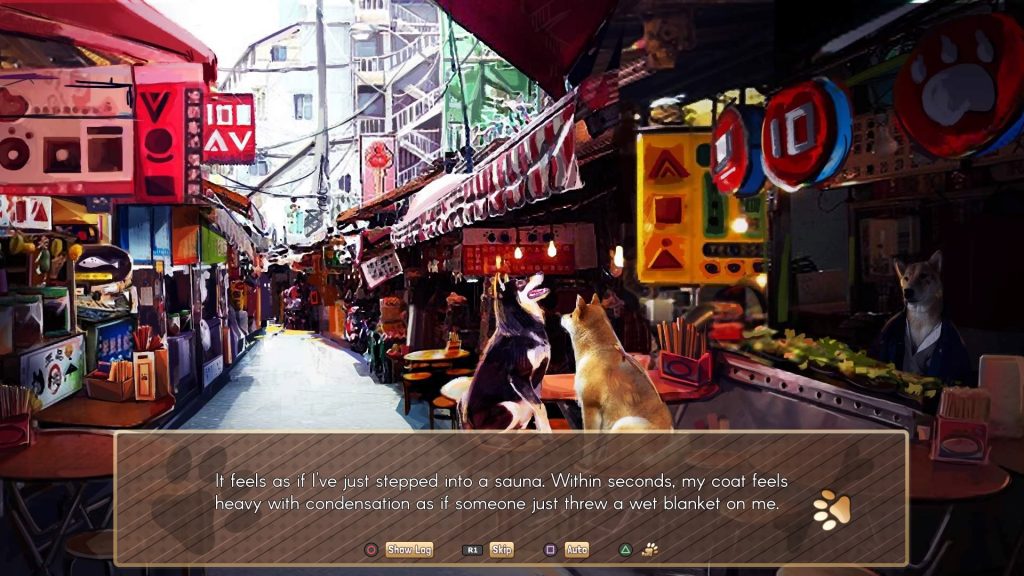 If there’s one thing I can admire, it’s the art. Portraits and backgrounds are nicely detailed and there’s a good variety to them. You visit many different locales which gives a good sense of a journey that’s been undertaken. Whilst the portraits are mostly static, time is taken to get them to show emotion and charm. The music remains fairly relaxed with the occasional bark and yelp to imply surprise or emphasis. Whilst I do find visual novels a fairly wasteful use of the medium, there’s effort on hand here to take your attention away from the text scroll.

Overall, though, I couldn’t really get on with this. Maybe it was the canine cast and setting but I couldn’t really commit to seeing this tale twist and turn. The initial intrigue of a missing brother and the military laser tag was swapped out for a sci-fi narrative that I just held no real interest in. The small cast was made to feel smaller by some being cast to the periphery. The tone is light but I just felt bored, especially when the action sequences took centre stage.  Maybe genre fans will find something here but it all left me fairly bored.

A Summer with the Shiba Inu
6 Overall
Pros
+ The story has some intrigue, although it's focused more on Syd's past.
+ There's some really detailed art on display.
+ The portraits have enough animation to convey some charm and character.
+ Light in tone, despite some dark themes.
Cons
- Setting it in a dog universe caused me problems when trying to build interest for the characters.
- The action scenes felt overlong and clumsy.
- Terrible dog puns.
Summary
A Summer with the Shiba Inu has a narrative that shows some early promise. Sadly the main mystery is sidelined for some more focused character work. It's welcome but it makes the ending feel presented without much effort to earn a conclusion. It's written well enough although I found the dog puns insufferable and Syd's accomplices are all very accommodating. It does feature some strong art and the portraits convey a great degree of charm and character. Sadly, the genre does struggle to show action and this game takes ample opportunity to imply dog on dog violence. It's clumsy but there's things to enjoy from this.