I’m having a hard time with the visual novel genre. There’s something about the writing in general that puts me off. It’s a very wordy genre and it’s all very geared towards telling, rather than showing. The next one on my docket is Cinders, from MoaCube. It’s a retelling of the classic fairytale with some intriguing twists. 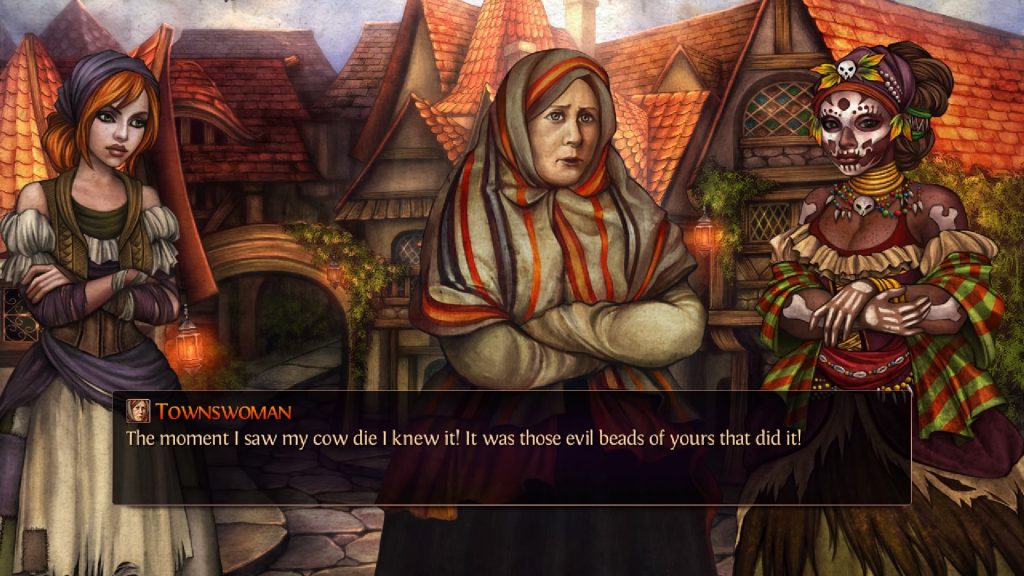 The story does follow the major beats of the familiar plot. Cinders lives in an abusive household with her two stepsisters and her wicked stepmother. They don’t delve into cartoon villainy but the story does try to go into depth about their motivations and why they do the things they do. Some of it deals with loss, nobility and social mobility in a way that really puts some meat on the bones of the original story.

This being a visual novel, there’s plenty of opportunities to branch Cinders‘ path in several ways. It allows the writers to get away and expand a little on the well-versed narrative. There are four main endings, each with a few variations to unlock. You even have the choice of a Fairy Godmother, which was a surprising touch. There’s plenty of decisions to make and, whilst they don’t all lead to branching paths, they can influence how the remaining cast respond to our damsel in distress. 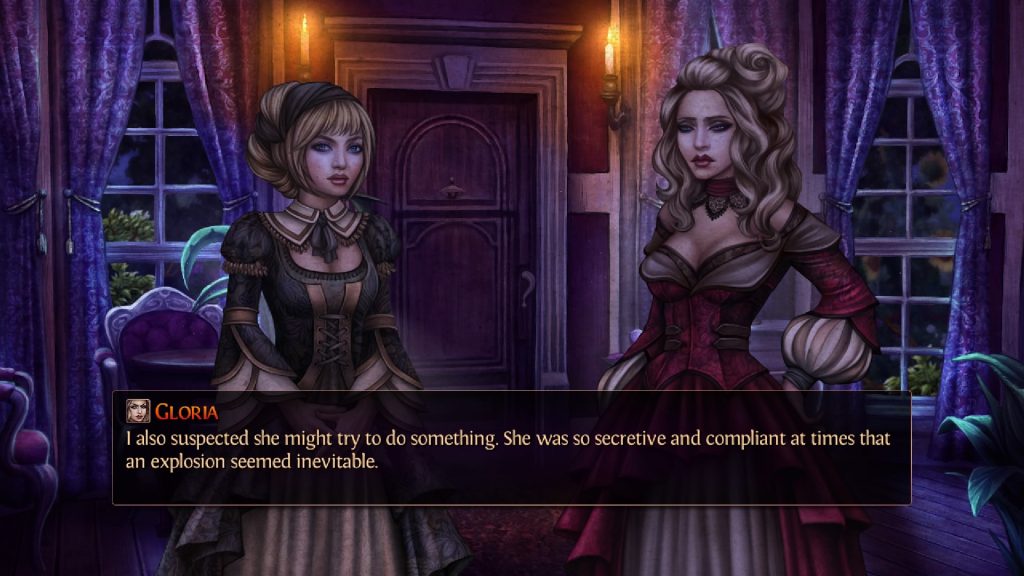 There’s a fairly mature and thoughtful tone to the writing. Some considerations have been taken to really explore the household’s history and the people within it. It touches on the fact that the Cinderella story isn’t as rags to riches as it first appears. The abuse Cinders faces is almost exclusively verbal. There’s no threat of violence and, despite her being called to due a fair amount of housework, Lady Carmosa has servants in addition to her own children. This allows the writing to discuss nobility in a way that the fairy tale never gets involved with.

You get a lot of interplay between the daughters and relationships are built in a fairly fascinating manner. It’s smart, although the game’s initial premise of being a dark take doesn’t quite come to fruition. Maybe I’m just making the wrong decisions but the original has hags trying to stuff their bloodied feet into a glass slipper. I’ve not seen anything on that level. What it does succeed at is giving the classic tale much more substance. Whilst it’s a story that’s been told be more, they’ve shown some scope here and some experimentation. 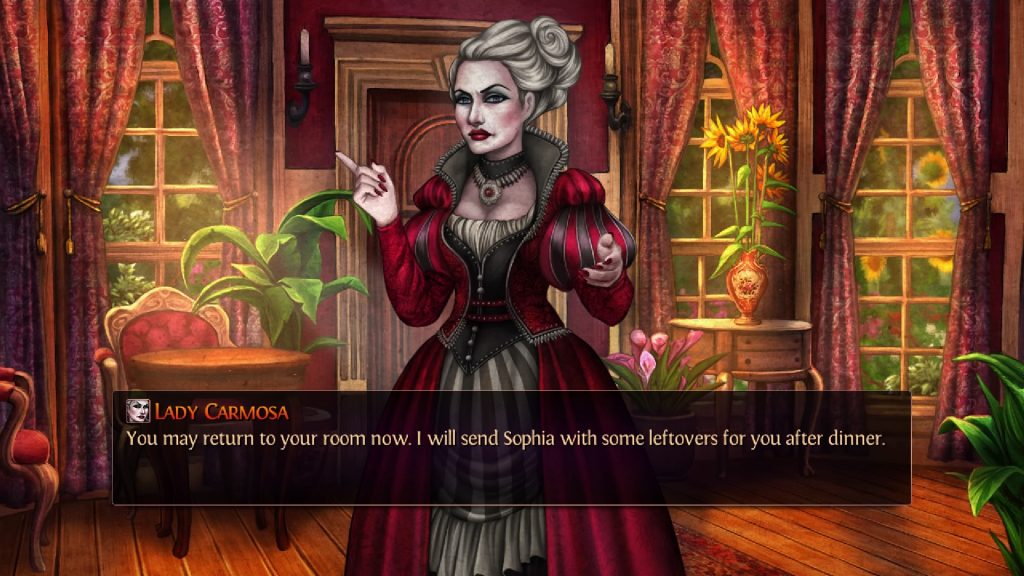 Repeated playthroughs can be used to unlock more endings, scenes and dialogue. It can be quite compelling to see what other endings are on offer and how well the writing justifies them. I played it fairly straight and nice on my first run but my second attempt saw me play Cinders in a more selfish manner. The two narratives managed to tell different tales although the source material is somewhat rigidly adhered to, at times. You will always meet a Fairy Godmother, you will always go to the Ball. The space in between is where Cinders‘ writing gets to flex.

Cinders features some striking visuals. The backgrounds have a really detailed, hand-drawn style and they’re nicely animated. It’s such a subtle thing but moving scenery makes such a difference and gives the scene some life. It does make the characters static nature more evident, but they do show some occasional emotion. Character design is fairly intricate and does help point the cast further into the realms of nobility.

One welcome side effect of an animated background is how much you pay attention to it. The story itself isn’t voice acted so you’re mostly focused at the text scrawl. The scenery helps draw you away from it and I have found myself glance up and linger to see the animations play out. I can really appreciate the effort that’s gone into the setting. 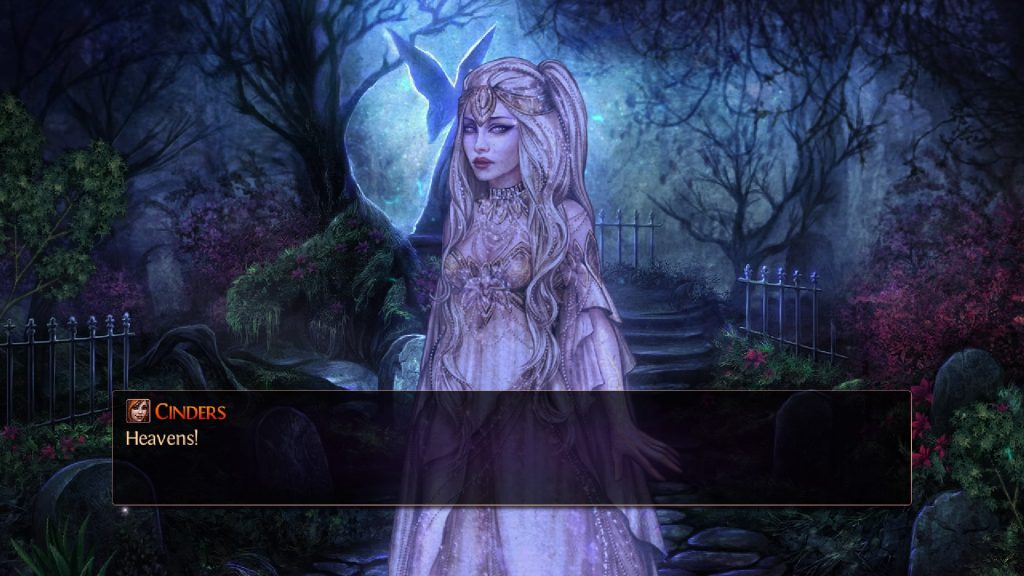 The score seems to keep things mostly light and airy. There’s not many tracks to it so you’ll largely hear the same motif over and over. It doesn’t carry much variation and any darker moments are kind of undermined by a soundtrack more concerned with a much breezier tone.

Still, the overall look and feel of Cinders is a product definitely looking to bolster an existing, well-known story. It mostly succeeds with your decisions shaping her character in ways that the fairy tale doesn’t. That said, you always are pulled back into the main plot points of the original with only slim opportunities to break from a familiar script. The artwork really shines and it’s clear some real care has gone into this.

Cinders
7 Overall
Pros
+ Smart, thoughtful writing.
+ Deviates from the original tale, although never truly breaks free of it.
+ Great, detailed backgrounds that are well animated.
+ Light and airy soundtrack.
Cons
- The animated backgrounds make the characters feel a little lifeless.
- Despite the wordy script, this can be over very quickly.
- Nowhere near as dark a retelling as advertised.
Summary
Cinders has a charm to it that I've rarely found in the visual novels I've played. The writing manages to contextualise and add to a familiar story whilst allowing the main character to branch in interesting ways. It's a shame the story doesn't break completely from the source material but there's some intriguing ideas on display, here. The detailed, animated backgrounds help create a lively setting and the music maintains an airy feel. It's a striking effort that largely succeeds.