Chess Knights: Viking Lands is the latest chess-adjacent puzzle game from Minimol Games.  We reviewed their previous game, Knight’s Retreat, earlier in the year and while we liked the idea, we weren’t a big fan of the execution or the general puzzle design.  So hopefully Chess Knights can do a better job of taking the idea and running with it.

To play the games in this loosely-grouped series, you don’t need to know how Chess works as such but you do need to know the movement capabilities of some of the pieces, namely the rook, bishop, queen and, of course, the knight.  Where Knight’s Retreat had you controlling multiple knights with a view to getting them to specific squares on the level, Chess Knights switches it up by having you rescue pieces and bringing them back to the start area.  There’s not much of a meaningful difference there except that it means you need to make a return trip, extending the solutions a fair bit.

Initially you start with one knight, one piece to rescue and an opposing rook who moves back and forth between two points each time you move.  You navigate to the piece you want to rescue (using the standard L-shaped movements of a knight piece), avoiding the rook and you land on the same square as the piece that needs rescuing.  You then make you way back to the start and that’s the level ended. 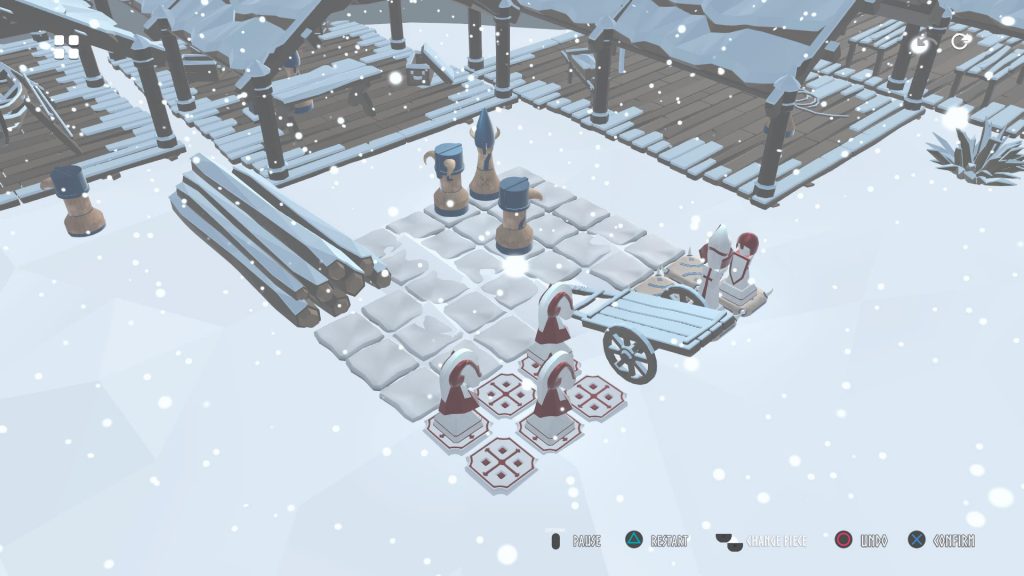 As you progress, you’ll have more enemy pieces to worry about and they’ll add bishops (who move diagonally) and queens (that can move diagonally or horizontally).  An enemy will move every time you do but only one will move at any time with their order rotating as you go.  The game will also give you more knights too, and of course more pieces to rescue.  Your knights can make multiple rescue trips and so you’ll mainly use your spares as cannon fodder because when they get ‘taken’ by an enemy, they are both removed from the board.

On the plus side, one massive improvement over Knight’s Retreat is that squares you land on do stay in play as opposed to being destroyed.  This helps some of the early and mid-game puzzles feel a bit more intuitive where as in the previous game, it often felt like there was only one way to solve a level.  And they do throw in a handy ‘undo’ move although this doesn’t work if your last piece is taken and only ever lets you go back one move. 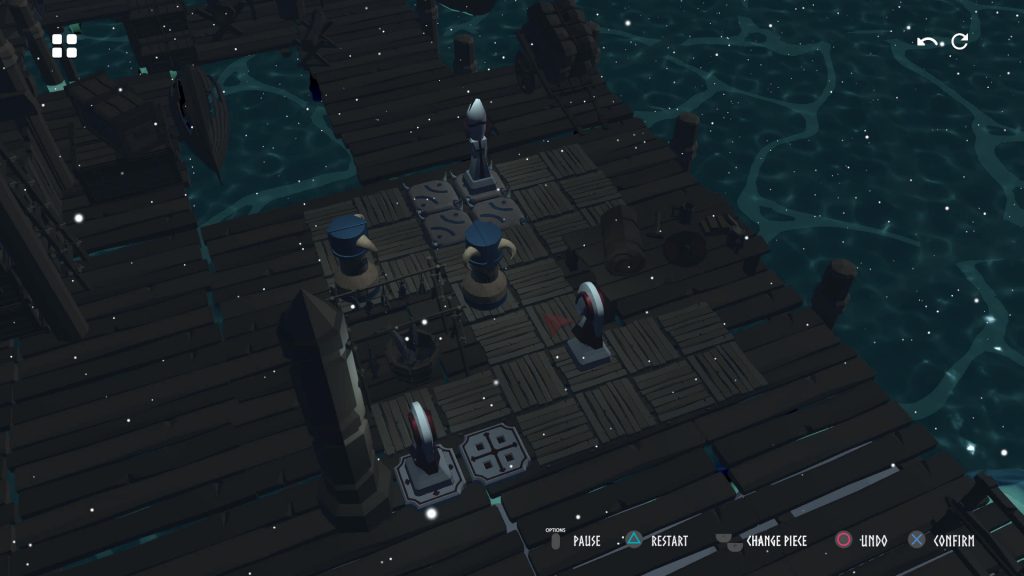 For a while it’s okay.  The early levels are gentle enough and the next batch are flexible enough that you can find a solution without it being too complex but once we got into the third set of levels, things got too complicated with everything being a trial and error series of long movement combinations that you could never visualise or plan at the start.  Instead you move, see which enemy piece moves and then reassess.  It’s very difficult to do anything intuitively and instead it feels like you’re putting together a big chain of moves with the hope that thirty moves later you won’t be painted into a corner.  It’s really unenjoyable after a while.

That’s a real shame because we enjoyed the first half way more than we did Knight’s Retreat but after a while the solutions became too complex and prescriptive for it to reasonably be any sort of fun.  We’d be a bit more forgiving but Chess Knights has other issues.  It shares the similarly clumsy camera angles of its predecessor which means that you’ve never got a truly optimal view of the action.  The pieces are only ever highlighted by looked as if they’ve been raised by an inch, which makes identifying your current piece quite tricky.  The chess piece design isn’t very clear either from some angles, making it harder to differentiate them.  Oh, and the playing area doesn’t have a chequered pattern which makes it a bit harder to read the board and see which squares are valid.

Minimol’s earlier games were much more stark and minimalist visually and it looked so much better but here they’ve tried to make it all a bit prettier and more atmospheric which would be okay but the game looks like a 2008 Xbox Live Arcade Game that would have cost 400 Microsoft Points.  Plus the snowy setting of the early levels makes it all look very bland and washed out and the cheap snow effects kind of get in the way.  Later on it gets a bit more green and sunny but it never really looks nice. 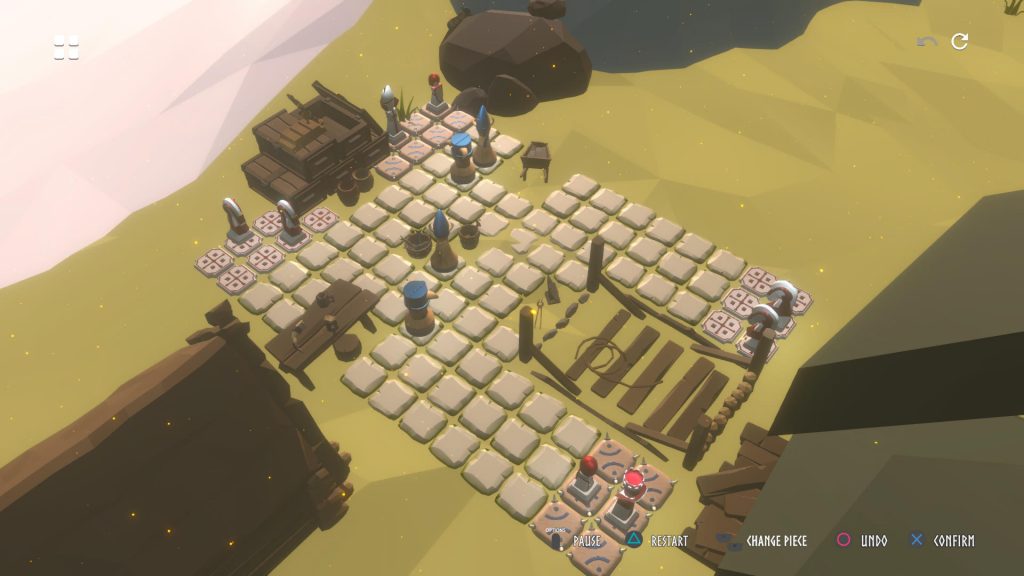 The biggest issue though and one that makes us think that this port wasn’t even playtested is the way the controls handled.  The system they’ve chosen where you rotate the left stick in the direction that you want to go is absolutely rubbish for this sort of game (imagine a regular chess game where you couldn’t just pick the piece you want and then pick where you want it to go) but to make things far worse, when you rescue a piece your controls are reversed for literally no reason.  We’re not sure if this is the world’s dumbest design choice or just a bug.  The fact that basic playtesting would have picked this up within ten seconds makes us think it’s a choice but then sometimes the controls are reversed before you rescue a piece, which then corrects it.  So there’s no consistency.  Either way it’s truly rubbish.

We didn’t much care for Knight’s Retreat but that issue alone is enough for us to like Chess Knights less even if we prefer the core mechanics of this one more.   The puzzles are more fun for longer in this game but ultimately we started to resent them.  Hardcore puzzle fans might get more out of it but even you guys deserve better presentation, clearer camera angles and more intuitive puzzles.  And nobody deserves these controls.  This isn’t good.

Chess Knights: Viking Lands
4 Overall
Pros
+ The basic concept is still quite good
+ First half of the game is reasonably enjoyable
Cons
- Awful controls
- Puzzles get too long and complex
- Bland, average graphics
Summary
Chess Knights: Viking Lands is a chess-themed puzzle game that has an okay core concept but the lengthy, complex puzzles stop being fun after a while and the controls are abysmal.