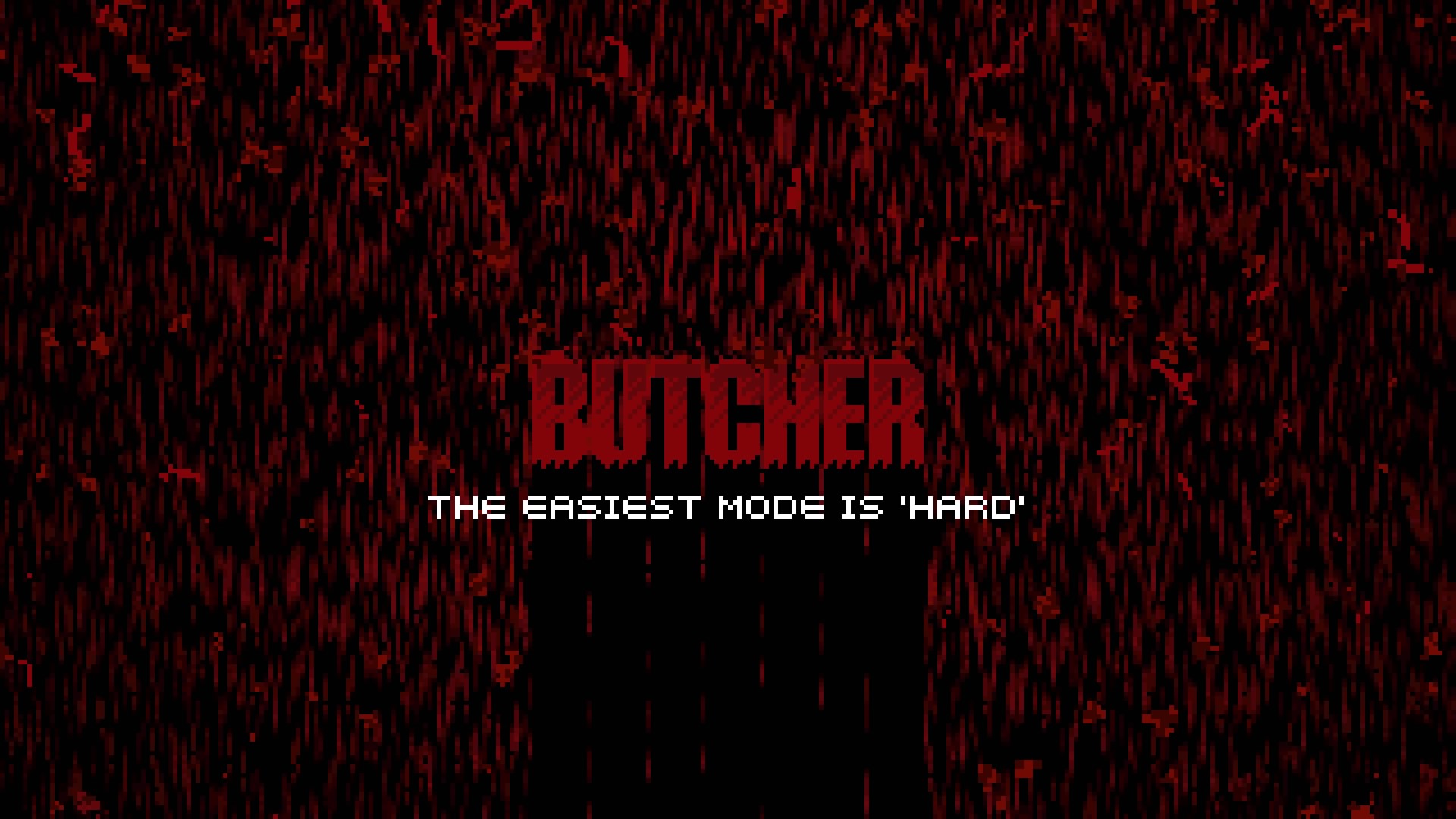 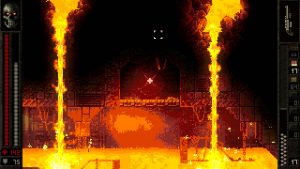 BUTCHER was released on Steam last year and now it’s been released on the PS4. Billed as a 2D DOOM can it live up to those lofty goals?

I believe there is a story to BUTCHER, the Steam page describes you as a cyborg sent to wipe out the last of humanity so from that I can gather you’re a Terminator-style robot. None of this is surfaced in game though but, as with DOOM, that doesn’t matter one jot. You’ve got twenty levels across five zones plus one boss level to get through and finish the game.

Each level is quite short, lasting a couple of minutes generally but as with old school DOOM there are no checkpoints so you must complete the whole level without dying. Gameplay-wise BUTCHER is actually more like the recent DOOM. Being 2D you can’t circle strafe your way to victory so a lot of the gameplay is based around jumping and platforming to avoid enemy attacks and killing enemies as quickly as possible. You use the right analogue stick to aim and R2 to fire, L2 jumps and you can drop through thinner platforms by pressing down. Keeping mobile is a necessity as on all difficulties the enemy will take a shot at you as soon as they are able and it doesn’t take much to wear you down.

This is one of those indie games where the default difficulty is ‘Hard’. The game actually starts up by stating the easiest difficulty is hard but this isn’t true as there is a ‘Casual’ difficulty though they try to discourage you from using it by not rewarding you with the majority of trophies and removing certain features. The main difference with all the difficulties is how much health you have and whether there are any health or armour pick ups in a level. The highest, that must be unlocked, is ‘Impossible’ difficulty which gives you a mere 33.3% health and no pick ups to top you up. An apt name. 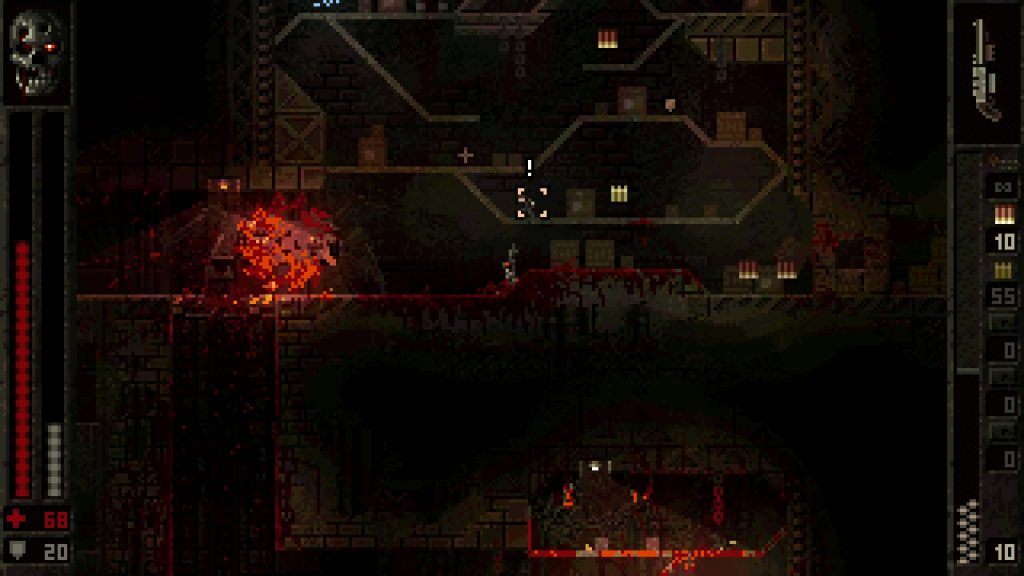 You can speed run each level (with online leaderboards) as well which might help you to imagine what type of game this is. Hard, wants a speed run community, the levels being short makes them quite learnable so it’s a more violent equivalent of the speed run platformers you usually see.

And boy is it violent. These images might not do it justice but the graphics convey an industrial environment, similar to the original Quake. Meat hooks hang from the ceiling, spikes line the walls, mechanical saw blade spiders patrol certain levels and molten lava lights up the lower levels. In motion it does look better than these stills, but lets not pretend this is going to blow you away. Your character is quite small on the screen though I never lost sight of him and the pixelated nature of the visuals never hampered my gameplay experience. If you’re a fan of pixelated blood painting the walls then this is the game for you.

As you progress through the levels new weapons will be made available to you and new enemies to use them on. Your usual suspects are here: the infinite chainsaw, shotgun, machine gun, flame thrower, grenade launcher and rail gun. The shotgun will be your best friend throughout with its ability to one shot weaker enemies from decent range though tougher enemies will require more fire power and ammo is limited to what you can pick up so switching up will be forced. 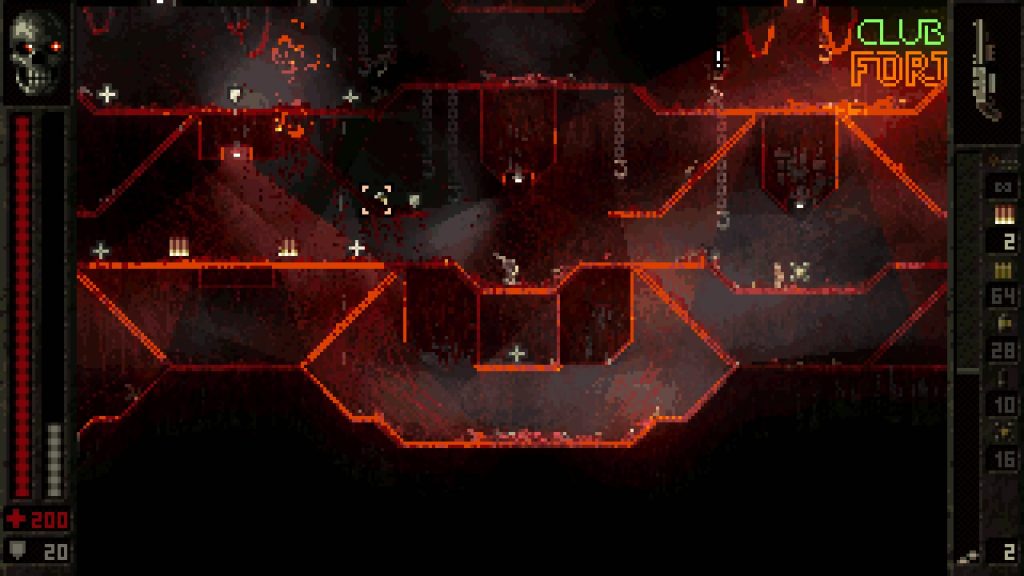 Annoyingly the switch weapon buttons are square and triangle, forcing you to take your thumb off the right analogue stick to toggle through and cease aiming. Similarly you can kick enemies with the circle button, into traps and the like, but I barely used it as apart from rarely being that close to enemies, I’d have had to have taken my thumb off the stick to do so. Beyond that I didn’t have too many problems with the controls.

There are skull collectibles hidden throughout the levels that have to be accessed in a DOOM way, as in trying to interact with every piece of wall or trying to find a hidden path. This is the only gameplay quirk that isn’t shooting everything on sight. At certain points you’ll be locked in an arena type area and you have to survive an onslaught of enemies but beyond that you’ll just be moving through the levels blasting everything, hopefully before it blasts you. 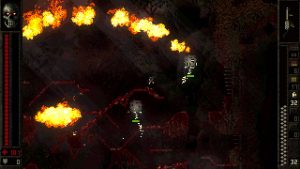 BUTCHER has its audience that it is obviously targetting and they’ll probably get a lot of fun out of it. It only takes about ninety minutes to get through (though there is a speed run trophy for under forty five) but the developers want to you play through on harder difficulties and try to master each level in the form of speed running. Although I quite liked my time with it I didn’t enjoy it enough to do that, but if it sounds like your cup of tea then I think the game achieves everything it set out to do.

BUTCHER
6 Overall
Pros
+ 2D-affies the DOOM formula well + Weapons feel powerful + Super gory if you're into that + Will satisfy speed runners
Cons
- Difficulty and lack of checkpoints means repetition will set in - Quite shallow - Minor control issues
Summary
BUTCHER pays a visceral tribute to DOOM on a 2D plane. The gameplay can be a bit shallow, the difficulty can result in repetition, but if you enjoy the speed run scene then this could have some legs.