From French Canadian dev Paper Cult comes assuredly not family friendly action brawler Bloodroots. So much so, that this reviewer was unable to play it with his kid present. You see, Bloodroots is gory. You don’t so much as kill your enemies as wholly eviscerate them. Where an enemy once stood, there’ll be a bloody smear and a drained corpse nearby. The background is Mr Grey Wolf is betrayed and sets off on a bloody quest of vengeance in the style of a Tarantino film. He kills those in his path with whatever is to hand.

As this excellent trailer shows, there’s not a lot you can’t kill them with. To highlight the various items to maim with, there’s trophies encouraging you to dispatch enemies with carrots and fish for example. These deaths are often very funny, indeed you’ll find yourself laughing repeatedly at the manner in which someone will die as a result of a roast chicken leading to their panicked asphyxiation. 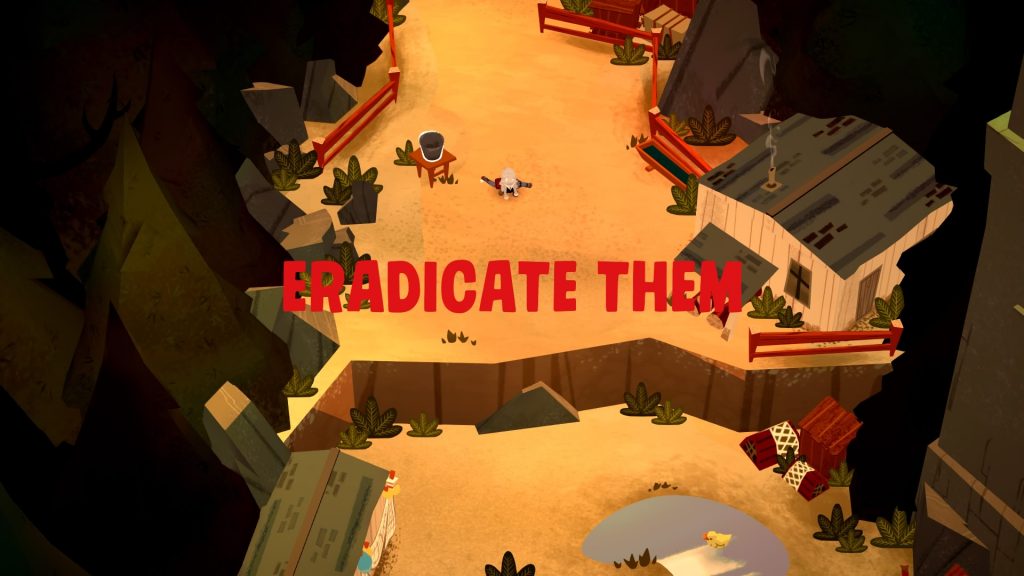 You’re beholden to combos and the speed at which you traverse the levels too. One level we made such a meal of before we worked out the optimal path, we probably died in excess of a hundred times. Heck, we knew we did as we popped the damn trophy telling us we’d done so. Every death feels like sloppiness on your part though, so you feel compelled to have another go.

At the end of each sub-level you’ll get a nice animated flourish where you dispatch the final enemy. The animation brings to mind any number of Kurosawa movies in terms of the style in which Wolf kills off his foe. It’s also a welcome chance to breathe before cleaving more poor saps asunder. 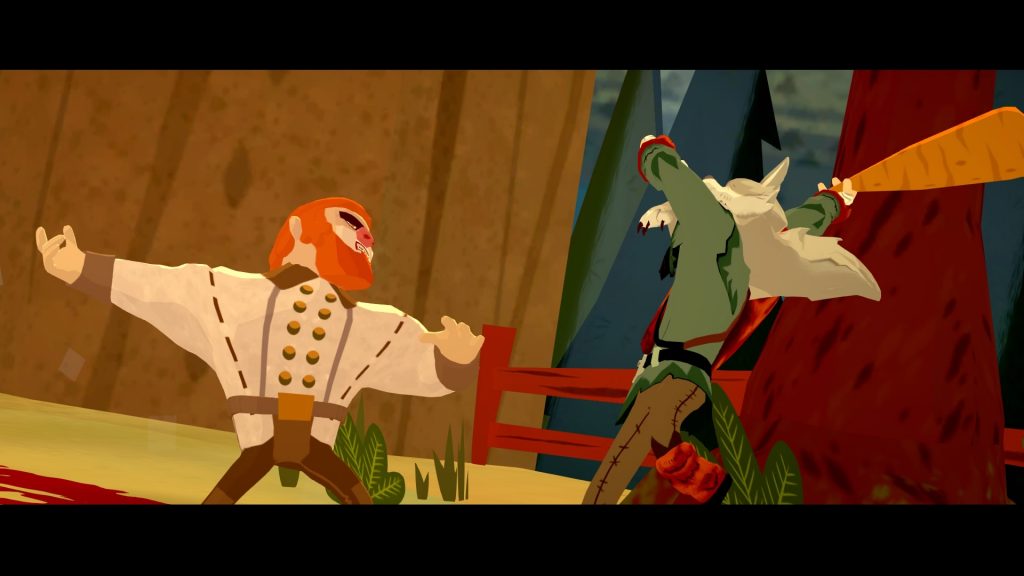 You can die in literally every enemy encounter. Time it wrong, you’ll die. Run into a group of enemies without a suitable melee weapon, you’ll die. Snag on an environmental obstacle, you’ll die. You probably get the picture. You’re going to die a lot unless you’re some kind of savant.

The thing is, as we said earlier, every death feels like it’s your own fault by being a bit crap with the necessary timing. Upon finishing the first act (more on that later), we revisited level 1-1 as a palate cleanser of sorts. More we finished the level in one continuous combo, such was our flow. The deaths become secondary, your timing being the only thing that matters. Never mind you leave a blur behind and the fact that to any spectators it seems excessively brutal.

We were enjoying ourselves so much, we even went for the “complete a level without using a weapon of any kind” trophy. We managed it too, this sort of thing usually being complete anathema to our usual style of gameplay. If there’s an easier route we’ll generally take it, but not here. 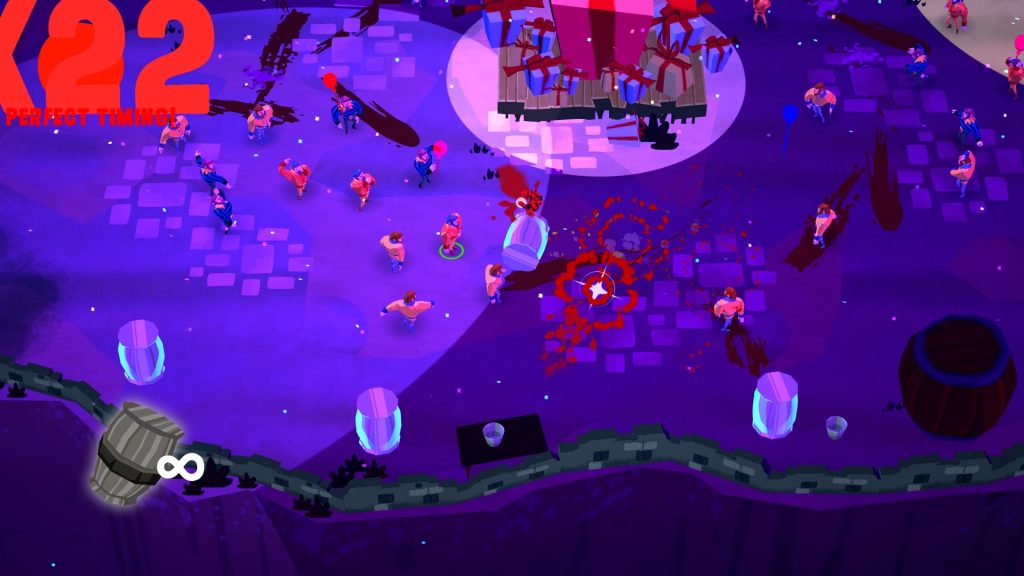 You see, at its core Bloodroots is a score attack leaderboard chasing obsession in waiting, just as much as Chime or any number of Cave shoot-em-ups. We’ve never gone for that level of leaderboard chasing personally, but our editor Richie has been known to dabble on occasion. Only Bloodroots has the just one more go part nailed and we found ourselves replaying levels we’d previously got a good rating on, purely to climb the leaderboards a little. Sure, they may be sparsely populated compared to any number of AAA games, but it matters not.

As you progress through Bloodroots, you’ll unlock hats that act as modifiers to levels you’ve already completed. We unlocked the bear hat (extra dismemberment) through normal gameplay and the boar hat for completing the first act. But one of the others we came up just short on the score we needed to unlock it. In addition there are hidden wolves in each level to find, but they’re generally off the beaten track a little. That’s it in terms of collectibles thankfully. 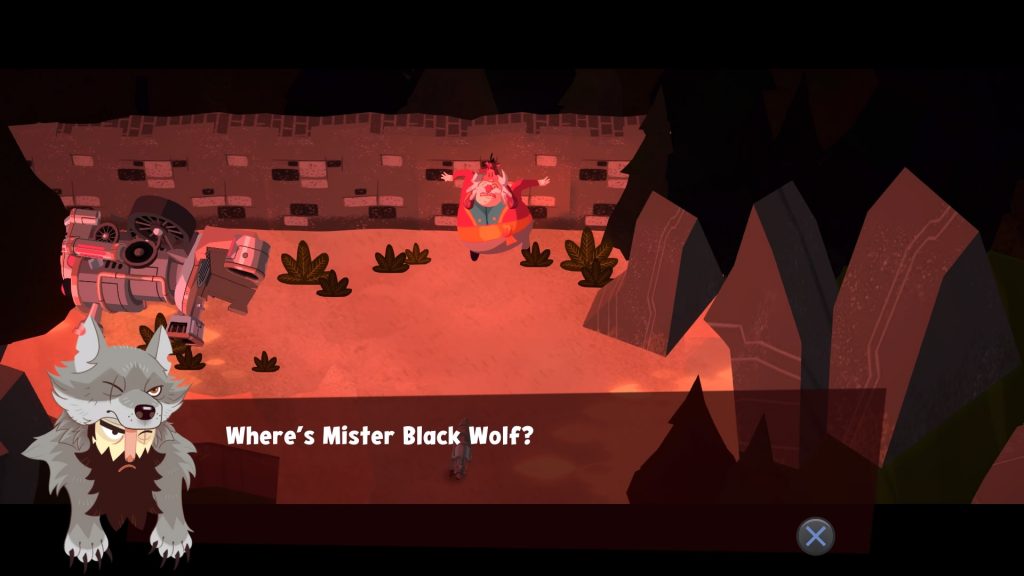 We touched on the end of Act One earlier. The manner in which you can die to a single hit made for a rather frustrating first section of the level. Indeed, we wondered if we’d ever get past it. But get past we did though, essentially cheesing it through with a small train of enemies in our wake until we reached a checkpoint. Benny Hill has nothing on us, put it that way.

On an already tough gauntlet, having sparse checkpointing can feel a bit punitive. Normal levels aren’t so bad as they’re broken up a bit better, but when you’re chasing someone down it gets wearing quite quickly. A clear head and minimal distractions helped,  but it still felt like we were replaying one long sequence only to fall at the final hurdle. To use an analogy from one of the many sporting events postponed or cancelled, it often felt like we’d cleared all but one fence of the Grand National, only to fall at the last. Then our horse got surrounded by those green barriers, which never ends well. The trophies for dying repeatedly in a level reference pop culture quite nicely, which lessens the blow a little when they do unlock. “Ned Ryerson” being one that makes perfect sense in context. 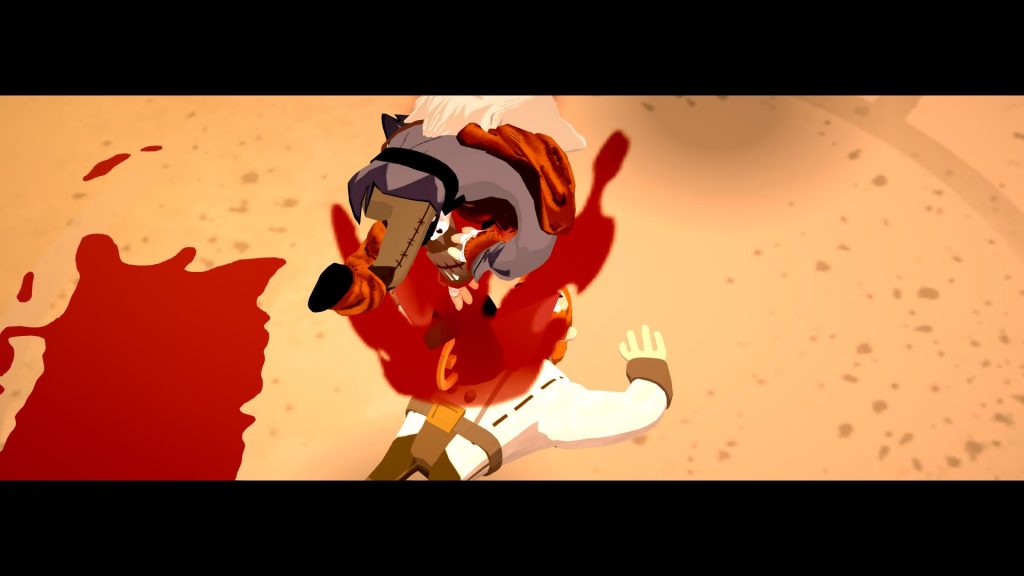 Another issue we noticed, especially when tearing through a level for score attack purposes is that level titles and onscreen text can get in the way and cause slowdown. Even on level 1-1, the beginning of the second phase with just a couple of enemies was susceptible. We found ourselves mistiming our attack and dying cheaply through no particular fault of our own.

Anyway, we’ve prattled on long enough. Bloodroots is great, if a little frustrating at times. Once you get into a groove its genuinely rewarding and you’ll forget what few deficiencies there are. The action is so frenetic we didn’t manage to hit the Share button on our controller, lest we died. Again.

Finally, us angry middle aged men with greying beards have, in protagonist Grey Wolf, a character we  could convincingly carry off in cosplay with minimal effort. The gaming world needs more world-weary tired pissed off old men rather than demigods hailing from Santa Monica. Though in the latter case, we’d just find ourselves shouting BOY repeatedly at our kid instead.

Bloodroots
8 Overall
Pros
+ Gloriously, excessively visceral
+ You can get into a genuine flow state
+ High score chasing is genuinely fun
+ Collectibles aren't a chore at all
Cons
- Gloriously, excessively visceral, so not one to play when kids are around
- Some checkpointing is a bit on the harsh side, particularly during lengthy setpieces
- Susceptible to slowdown occasionally leading to cheap deaths
- Impossible to get proper action screenshots in as you'll die! 😉
Summary
Bloodroots is yet another great indie game you need to play. Go on, get to it. Gory as hell and addictive with it, this is a score attack brawler you'll want to play over and again.