Zen Studios, probably most famous for their pinball games, have moved out of their comfort zone with Operencia: The Stolen Sun. It was released on Epic Games Store and Xbox One last year but has now made it to PS4. They’ve dabbled in other genres in the past but how have they done with an old school, first person, dungeon crawling RPG? 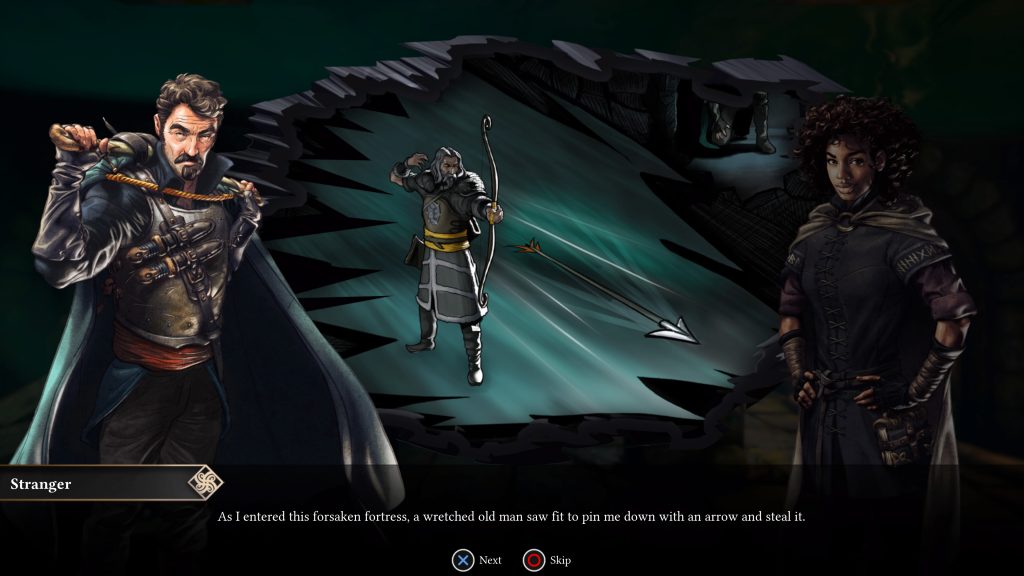 My main experience with the genre has actually been with Japanese games like Stranger of Sword City, however apart from the aesthetics and the approach to difficulty they aren’t so different. After an initial chapter where you play as overpowered pre-made characters you get to choose the class (Warrior, Hunter or Mage) and gender of your main protagonist. They’re a farmer who keeps having the same dream about a deer leading them to an underwater castle. This underwater castle is where your adventure starts, meeting your first party member instantly.

Each dungeon plays out similarly. You move one tile at a time, revealing the map as you go. You can turn at 90 degree angles but you can also use the right stick to move the camera around as you would a first person shooter, allowing you to look around and interact with objects. You’ll find money and chests lying around but you’ll also need to pick up key items and interact with switches and puzzles. In fact puzzles are a large part of the gameplay. The other large part is obviously combat, but there are no random battles. Enemies wander the halls and you can walk up behind them for an ambush and the first turn in combat but if they spot you they’ll run towards you, they don’t only move when you move like some other titles. 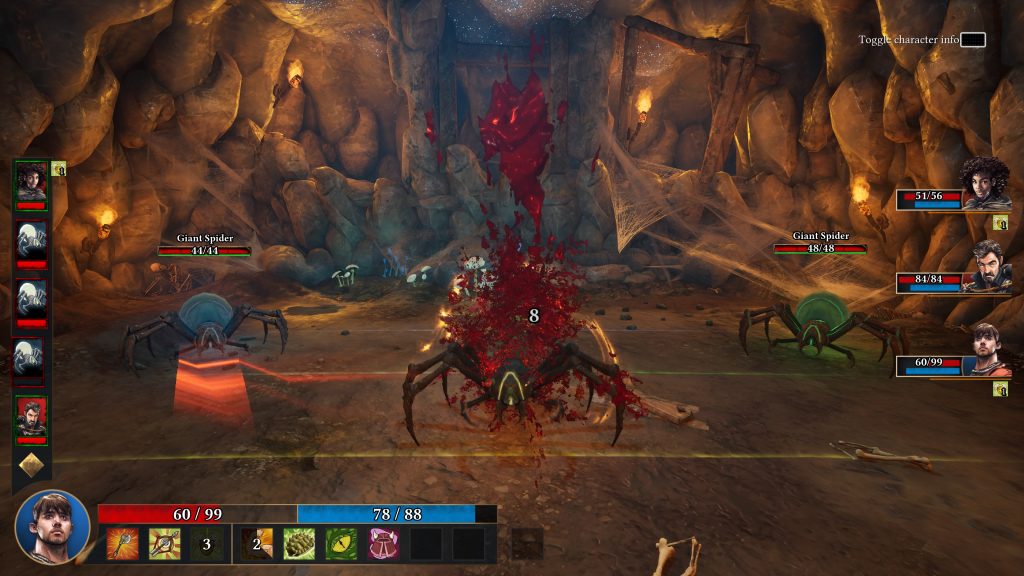 Combat is turn based, letting you pick from basic attacks and the abilities you’ve unlocked. Abilities are very powerful and will be the key to getting through most battles but they use Energy to perform. The only way to recover Energy mid battle is through guarding, otherwise you’ll need to rest at specific campsites outside of battle. Each ability also has a cooldown time so juggling the use of your abilities in order to come through fights relatively unharmed is the key to progression as resting is limited by how much firewood you have found.

As there are no random battles then you know that once an enemy is dead they’re gone forever, you’re free to explore and puzzle solve without threat of death (unless there are harmful traps of course). This also means you can’t grind to make yourself stronger, but Operencia is quite user friendly in many ways (characters still gain experience even if they died in battle, for example), so you can actually change both your character stats and the abilities you’ve unlocked at any time. If you’re feeling a little squishy then up your vigor and gain more health and defence, whereas if you’ve not got enough strength to equip your shiny new weapon then redistribute your points so that you do. It’s a very forgiving and welcoming system. 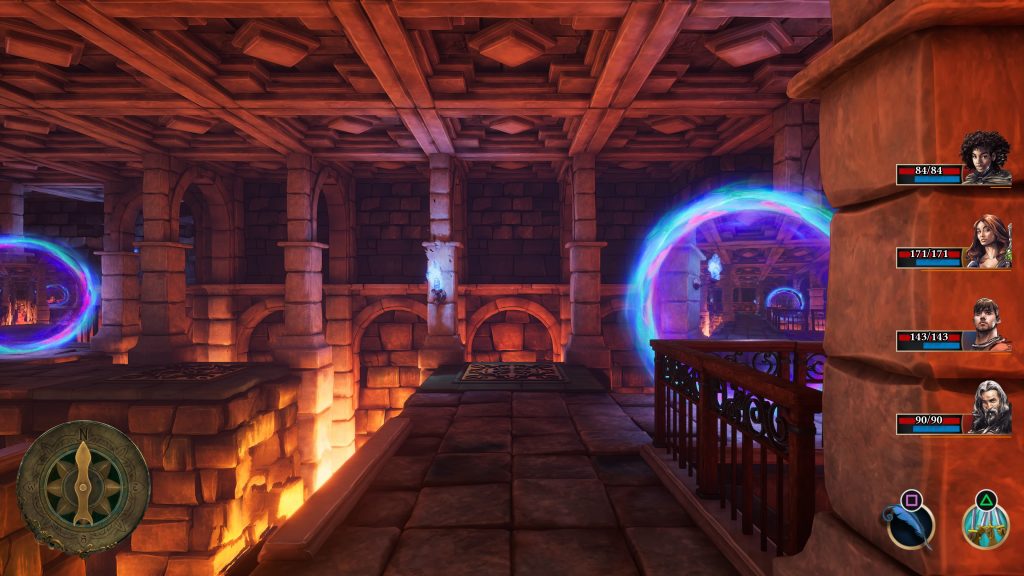 That’s not to say it doesn’t offer any challenge. Groups of enemies will wear you down at times but the game is quite generous with the firewood meaning you’ll usually have enough to use if you need to. The puzzles are a little less forgiving every now and then and there are secrets strewn about the levels like false walls but as I said, once the enemies are dead you’re free to roam as much as you like uninterrupted. The map screen also states how many secrets there are and a percentage of map completion so you can keep track of that stuff quite easily.

If you want to make the game harder then when you start a game (it can’t be changed after the fact) you can select normal or hard on four different settings. You can turn off the map meaning you’d have to make your own if you want one, you can turn off autosave meaning you’ll have to save at the campsite often, you can turn on permadeath so losing a battle will wipe your save and you can simply make battles more difficult. There is a trophy for completing the game with two of these activated which is why you only see a compass on my screenshots and not a minimap.

The over twenty hour journey will have you finding new party members who each have their own character class and skill tree. Everyone, including your created protagonist, is fully voiced, although the voice acting isn’t the best. The story itself is okay, there’s no dramatic twists or anything like that but it’ll take you through some interesting dungeons. The visuals are quite nice artistically but don’t have that AAA polish to elevate them to gorgeous but the music suits the environments well. 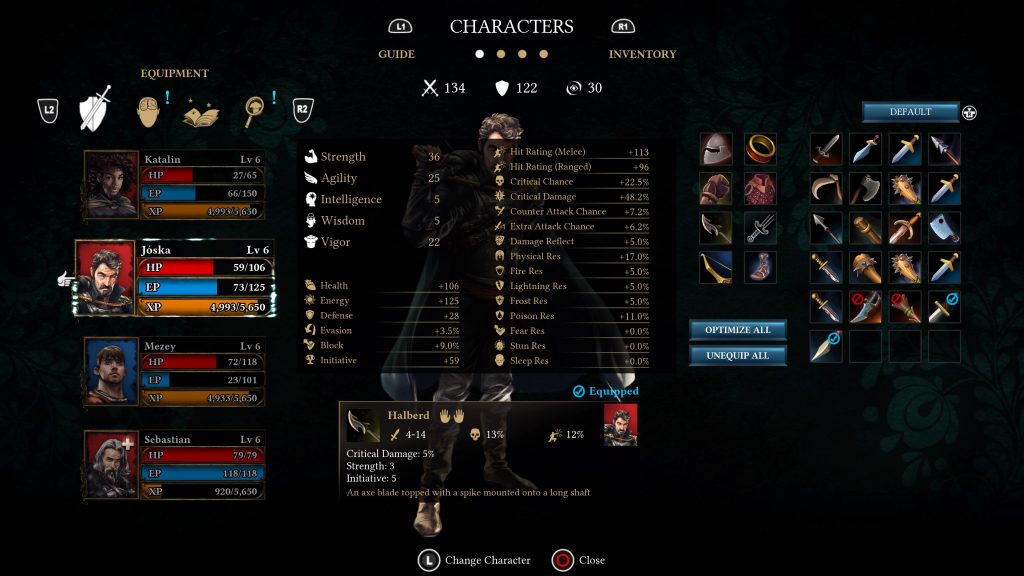 Operencia: The Stolen Sun does a lot of things well. At no point in my playthrough did I feel particularly excited but then I never disliked my time with it either. Some of the puzzles can be a little obtuse but the smart decisions around combat help alleviate that somewhat. Being a little shorter than average you’ll probably enjoy your time with it as a fan of the genre and the user friendly attitude would probably make it quite welcoming to newcomers as well.

Operencia: The Stolen Sun
7 Overall
Pros
+ Some very user friendly decisions
+ Combat does evolve as you progress
+ Not overly long
+ Some nice visual design
Cons
- Some vague puzzles
- Voice acting isn't great
- It did crash a couple of times
Summary
Operencia: The Stolen Sun is a user friendly but still challenging first person, dungeon crawling RPG. The voice acting isn't the strongest and the puzzles might have you scratching your head but the overall experience is an enjoyable, slightly shorter, adventure.