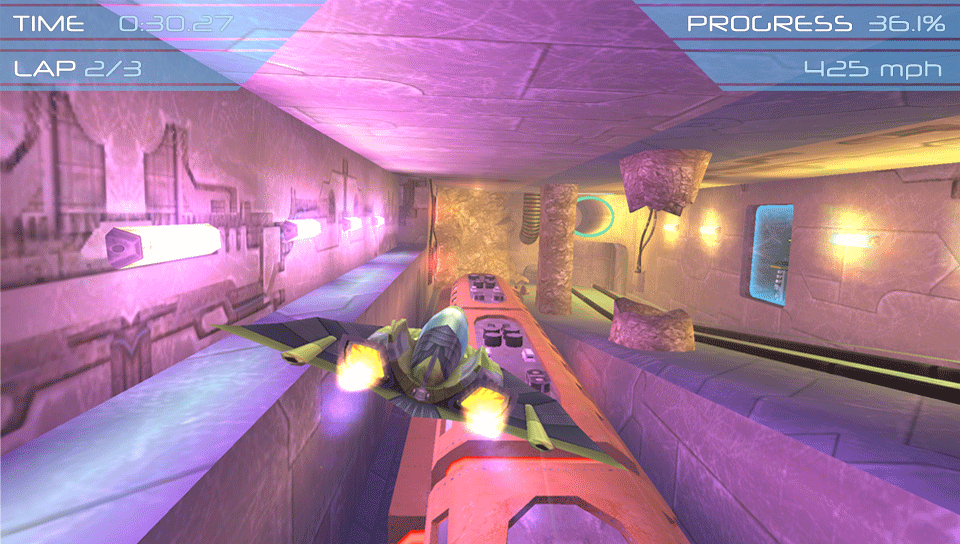 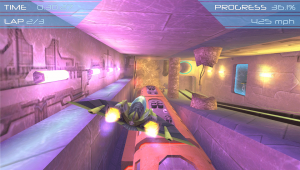 Unlike other racers the tracks here are tubular and your craft is free to move in any direction inside this space, you’re not tethered to the sides of the track.  To make the tracks interesting there are obstacles and protrusions all over the place, and avoiding these is the main challenge of the game.  The tracks open up in places and I found that when this occurred it was a pleasant surprise adding a sense of freedom to the rest of the tightly controlled track.  These open sections also offer multiple routes to go down adding a nice sense of variety to the game.

Visually things look really great and the Vita’s screen makes the crisply designed tracks pop.  Things are a little simple and if you get up close the textures aren’t anything to write home about, but then if you’re getting up close you’ve probably crashed.  The game does a nice take on the bio-mechanical design scheme and there is an interesting mix between some heavy industrial tubes and odd organic architecture it sort of works.  Also there is a really atmospheric intro movie which sets the scene well and gets the game off to a great start.

Air Race Speed is fast, like really fast.  The speed coupled with the fact the courses are down tubes gives the game a great sense of danger.  The sense of adrenaline and exhilaration when you narrowly miss an obstacle is awesome and one to savour.  It’s also crazy addictive, the first time I booted this up I played and played until my Vita ran out of juice which certainly hasn’t happened in a long while.  What helps get into the groove is the speed at which you can restart the course when you crash.  This tight cycle allowed me to spend more time racing and less time staring at loading screens. 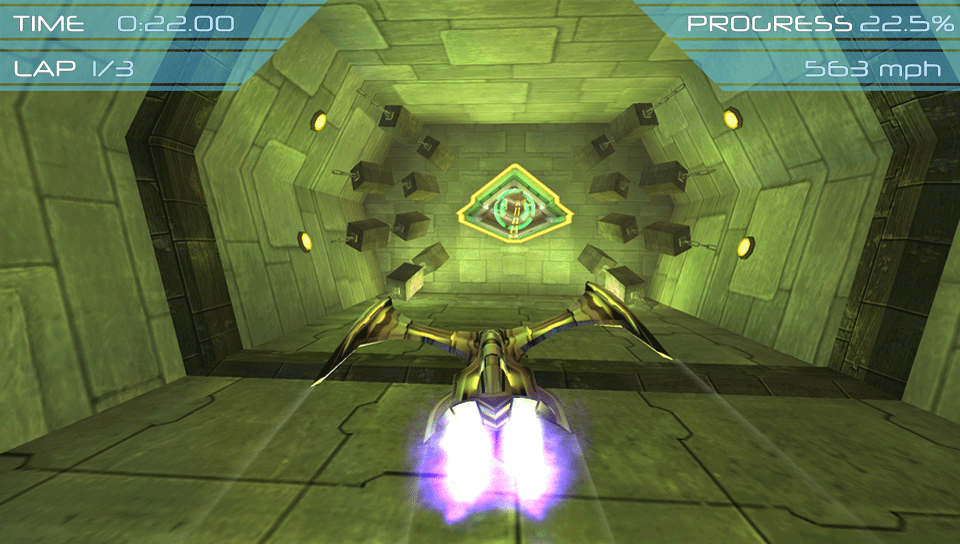 The one more go nature of this game is really strong and what adds to this is the three star rating for each course.  Complete the track in a certain time and you can get a bronze, silver or gold star.  These in turn work towards unlocking the new craft and courses for you.  This is a nice feature which adds manageable goals and rewards. The only downside here is that once you’ve unlocked the later craft there is never any reason to go back.  Also in order to beat the later levels on gold star rating you’ll need to be using the best craft there is as the slower earlier craft just aren’t fast enough.

Control is everything when it comes to racers and Air Race Speed has a different, yet successful, take on this.  There are two control options the first uses the Vita’s motion sensor, which is not very good, and the better one using the sticks.  In either mode the crafts slowly go forward automatically which is possibly a result of the mobile origins of the game.  However realistically I was using the unlimited nitro as an accelerator, with my finger pretty much glued to the X button.  The crafts can be banked with the shoulder buttons, and banking allows for tighter turns and fitting through tighter vertical gaps between obstacles.  Overall the controls work really well here and are both responsive and simple. 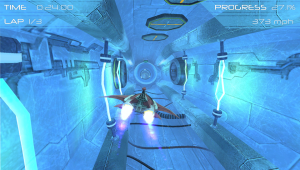 I really like Air Race Speed.  It is a tight little arcade racer with a simple premise executed exceptionally well.  The one more go nature of the game makes this ideally suited to the Vita and can easily keep you playing for hours at a time.   It offers a decent level of challenge and a lot of content for the cheap price point.  You need to own this game if you have a Vita.

Air Race Speed
9 Overall
Pros
+ An all round excellent racer + Tight controls + Amazing sense of speed + Nails that one more go feel
Cons
- The motion controls aren't brilliant - Once the newer crafts are unlocked there is no need to go back to the old ones
Summary
Air Race Speed is a tight little arcade racer with a simple premise executed exceptionally well. The one more go nature of the game makes this ideally suited to the Vita and can easily keep you playing for hours at a time. It offers a decent level of challenge and a lot of content for the cheap price point. You need to own this game if you have a Vita.