The long summer games drought is nearly over but it’s still quite quiet and the weather has taken a turn so you may be looking for a game to soak up your weekends. Something like a Civilization game maybe, something like Age of Wonders: Planetfall which has just released on PS4. 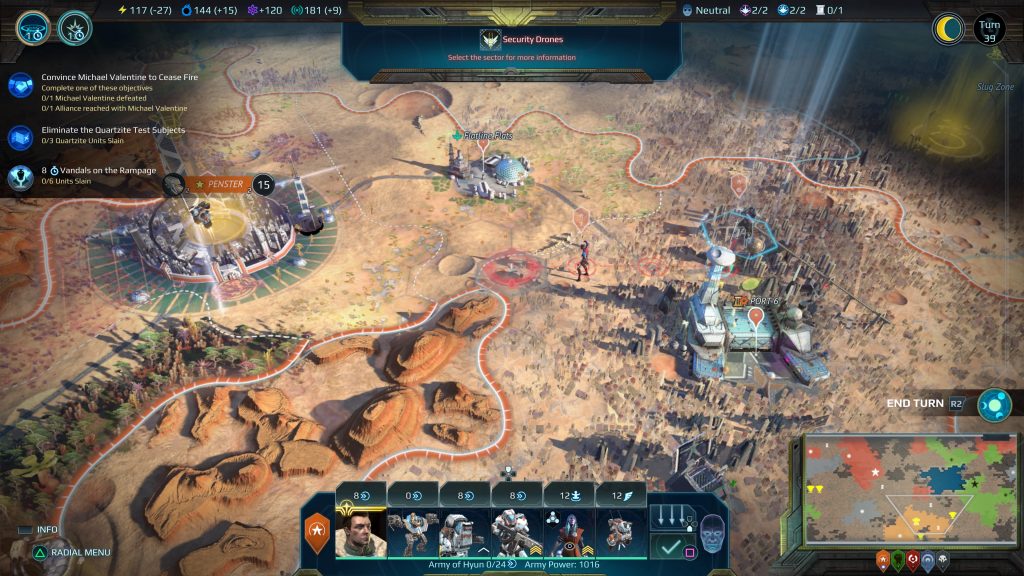 A 4X game (explore, expand, exploit and exterminate), you can play as one of six factions as you try to take over a randomly generated map whilst up to eleven other commanders try to do the same. How you do this is up to you. You can be diplomatic, unifying all the commanders in friendship. You can use war to take over the whole map or destroy all the other commanders or you can develop a doomsday weapon for a technological victory. Each commander takes it in turns to complete their actions. These can be founding new colonies, researching, deciding whether to build colony enhancements or combat units and moving those combat units around the map, exploring or fighting.

Fighting takes an interesting twist in that it’s similar to XCOM. As opposed to it being a simple numbers game like in Civilization here when you enter combat you’ll be taken to an arena where you move units individually. You can build armies of up to six units, and adjacent armies will generally be pulled into combat with you allowing for up to 42 units in a battle. Like XCOM it’s turn based and you have action points (three) to use to move and attack. You can use cover of varying heights, go into overwatch to attack any unit that enters your field of view and you have special abilities that act on cooldowns.

If you enjoy it then there’s plenty of it happening as even if you’re being passive there are Marauders on the map which are always aggressive and NPC factions will ask you for help with side quests (researching stuff, building stuff and killing enemies) and if there’s more than one on the map then helping one will annoy another. Unfortunately I found the battles to take a long time and they aren’t as enjoyable as XCOM, but luckily there is an auto battle option that probably isn’t as efficient as a good player taking control of the battles but for the sake of the speed of the game I was willing to just try and get my army as strong as I could and auto battling. 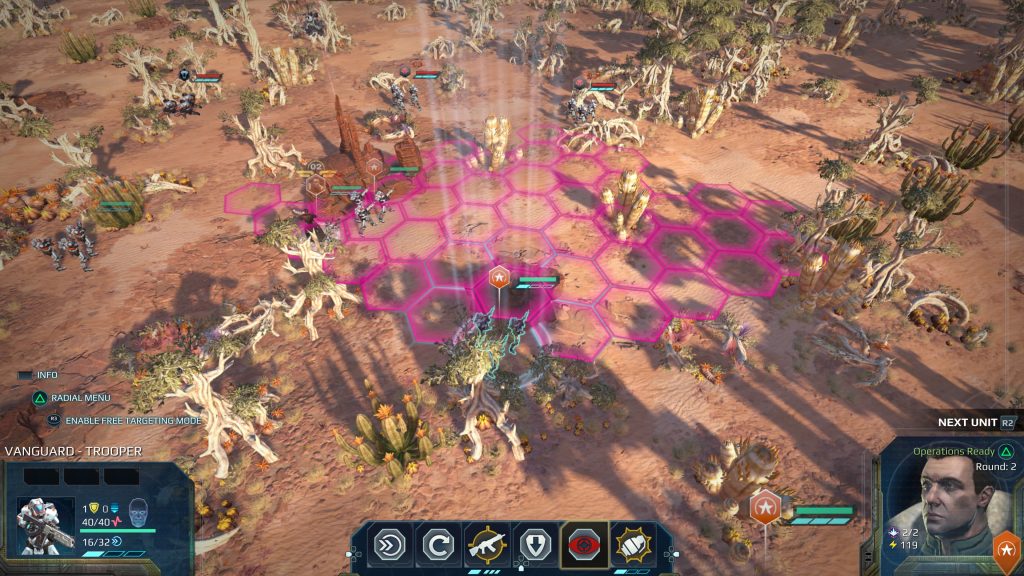 Age of Wonders: Planetfall is sci-fi themed, so you’re colonising new planets and mechs, androids and aliens are commonplace. The environment graphics do a good job of showing off the different types of alien worlds although the character models aren’t great and they don’t ‘pop’ off the screen making the maps harder to read than I’d like.

Each faction has their own story which is explored through the meaty campaign which has three scenarios open to start with and nine more unlock as you complete those. Depending on your experience and play style each individual scenario could last you a dozen hours, if not more. The scenarios give you missions to complete which will divulge the story with you often being able to complete the level without attaining one of the usual victory stipulations, just working through the main missions. To a point it also helps you to learn the game, though it’ll be your own experience that will do this eventually, the in game tips and the tutorial only teaching you so much.

The 4X genre is primarily constrained to PC with only a few attempting the cross over to consoles due to their complicated nature, both in mechanics and controls. Though not perfect once you get the hang of things playing out your turns is not a problem, with easy shortcuts to new messages and a quick tap of

will take you to units or structures that need attention before the end of the turn. Radial menus help you get to important screens quickly, though some of these screens can suffer from a bit of control lag making the cursor jump further than you’d intended. Similarly, kitting out your army is a bit awkward on a controller as you cycle through each slot with the dpad where as on a PC you could easily just point and click. 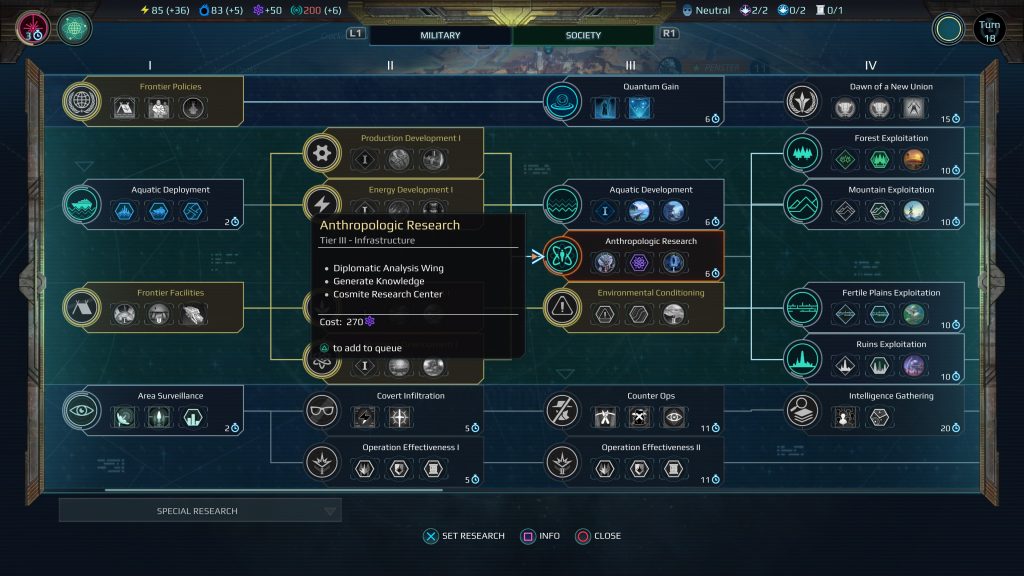 I also encountered a couple of bugs. There are basic things like character portraits disappearing and there are very bad things, like the ‘End Turn’ button not functioning and I did experience one hard crash. Luckily, along with being able to manually save at any time the game keeps multiple autosaves as back ups.

On top of the campaign and being able to load up a random map against the AI (which is fully customisable) there is an online mode. The lobbies were empty when I tried and spending that long playing an online game doesn’t really appeal to me but it’s a nice feature to have if it does appeal to you.

Age of Wonders: Planetfall makes some missteps but is a successful console 4X game. The combat slows things down too much for me but the auto battles come to the rescue there. Playing out your basic turns is very easy with the control scheme and the loading times and enemy moves don’t take too long but when you get into the more detailed areas things can become a bit clumsy and laggy. However you cannot argue with the content offered. Each of the twelve scenarios will take hours to beat and then you can arguably play the skirmish mode, with all the different factions, map sizes and difficulty levels forever. 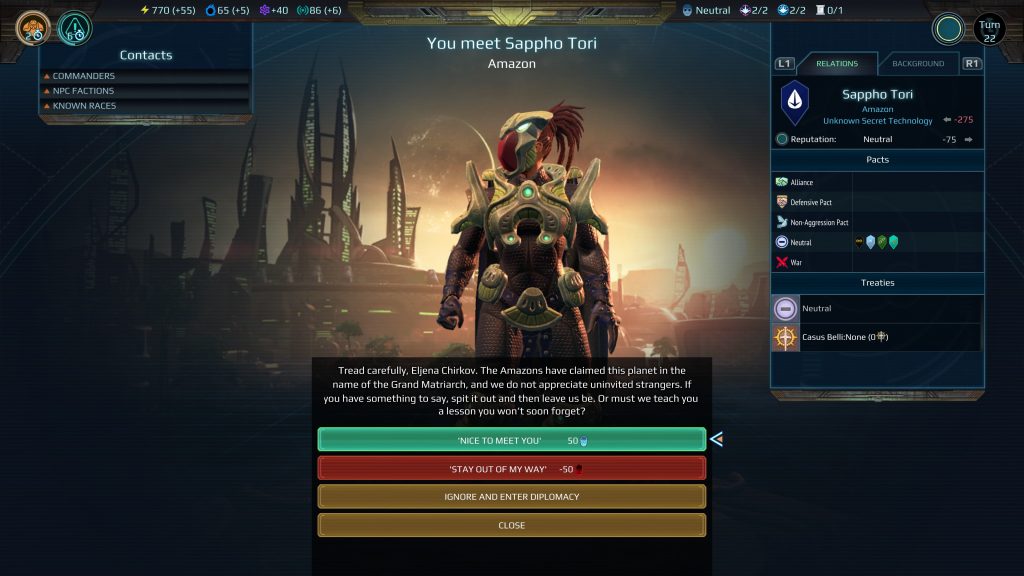 After a complicated start, once I’d began to grasp the controls and how the systems worked I was suckered in, as I tend to be with these types of games. I’ve lost multiple days to it already, playing for far longer than I had intended so if you’re a fan of the genre then I’m sure it’ll do the same for you. If you’ve never dabbled with 4X games before then this isn’t the most beginner friendly game out there, but if you stick with it you’ll definitely figure it out and it will certainly be worth it.

Age of Wonders: Planetfall
8 Overall
Pros
+ Lots of single player content
+ Controls are generally adapted well for the controller
+ You will lose hours at a time to it
Cons
- Manual combat is slow and not a lot of fun
- Some menus are laggy and clumsy to navigate
- Graphics could be clearer
Summary
Age of Wonders: Planetfall successfully brings a 4X title to consoles. The manual combat can slow things down too much and there's a learning curve to tackle, but the controls generally do the trick and there is so much content here for a solo player that you'll lose dozens of hours to it and still have much more to explore.