Wayward Strand, from developer Ghost Pattern, takes part during a very specific window of three days in early 1978. Friday 27th January to Sunday 29th January in fact. It’s also very very Australian. It’s not quite the stereotypical Joe Mangel “you little ripper, let me get the ute!” levels of antipodean, but more when you have nurses referring to running around like headless chooks.

The varied voice cast including Anne Charleston (Madge Bishop off Neighbours) and long time The Sullivans actor Michael Caton (playing a character that looks uncannily like him) do a great job of depicting the geriatric inhabitants of a flying hospital in a former airship. 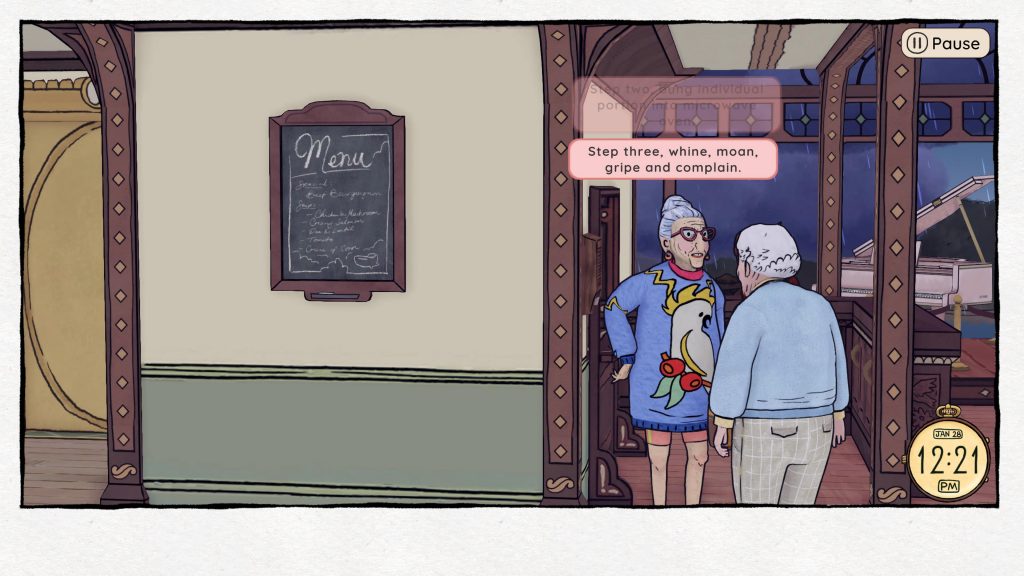 Not the most normal setting then. For reasons not immediately apparent, the airship somehow ended up moored in a bay somewhere on the Australian coast. We’d guess it’s somewhere in Queensland, perhaps Townsville way. Though partial funding by the Bunurong Land Council, might suggest it’s in Victoria. It lay derelict for years until it was renovated by entrepreneurial types as a hospital.

Never mind that this is rather unlikely, you’ll learn to just roll with it. Your main interaction is via the improbably named Casey Beaumaris. She’s a young girl tasked by her mum, a senior nurse, to help keep the various patients in the hospital company. By doing so, you’ll grow increasingly fond of the patients, however cranky they may be. 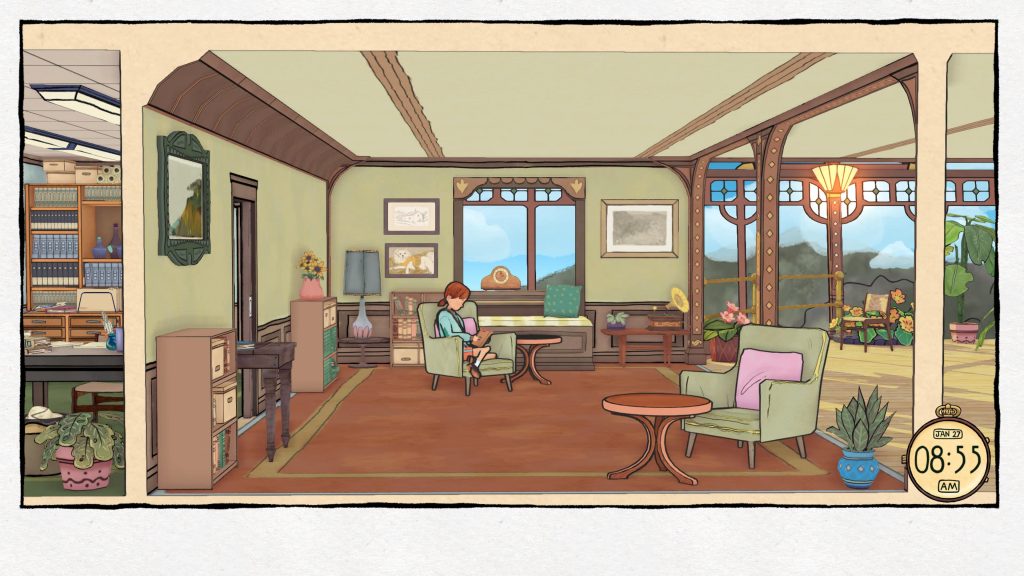 Wayward Strand casts a very sympathetic eye on all manner of illnesses that might affect the elderly, especially dementia. One patient in particular complains of pain repeatedly that turns out to be something more serious. Another patient is mute for reasons never entirely understood, but Casey still forms a bond with her despite her non-communicative state.

One thing Wayward Strand does very well is convey the weird feeling that pervades, regardless of your age, when you’re visiting anyone in hospital. Casey’s slightly awkward interaction with some of the patients and the way she sits on the beds, occasionally ill at ease, unsure of what to actually do.

Ostensibly she’s there to keep the elderly patients spirits up, but she ends up writing in a notebook with a view to possibly writing a piece for her school newspaper. This works as a handy mechanic to prompt you to follow up with questions. For example patient A might not like patient B, but patient C has more information as to why. 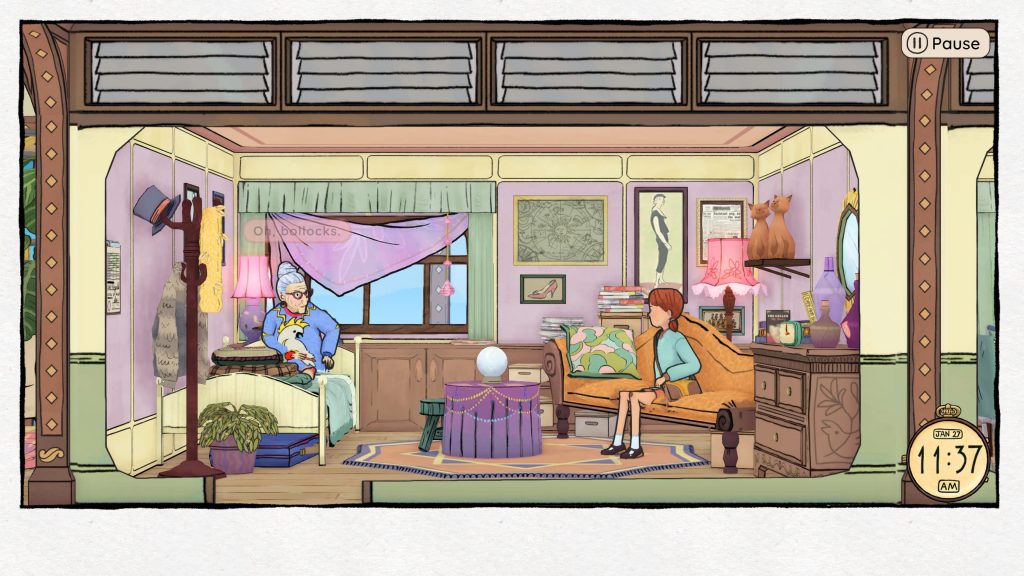 This turns what might otherwise be a mundane walking simulator into a whodunit of sorts as you attempt to piece together each of the patients individual back stories. Not to mention the ordinary staff members including your occasionally grumpy mum and the aloof porter Joe.

For those with one eye on trophies, a rinse this isn’t. In fact, during our playthrough we only unlocked three out of thirty trophies. We get the impression that certain events only happen at certain times, and if you happen not to be there, you’re out of luck. We had a feeling that stuff was happening out of our sight quite often, a bit like Digital Pictures schlocky Mega CD FMV adventure Night Trap.

Though unlike that lemon of yore, Wayward Strand doesn’t resort to a cast of b-listers, at least not by Aussie standards anyway. As well as the aforementioned Madge Bishop, we’ve also Prisoner: Cell Block H veterans among others. We feel we’ve barely scratched the surface here, we get the sense that there’s more on offer from repeat playthroughs. Perhaps next time we’ll focus more on one particular patient for example.

There’s a few little running gags like the chef complaining about his lack of kitchen equipment, hence his only being able to provide soup at lunchtime. We suspect he might only provide soup for breakfast and tea too. It felt like an anachronism when mentioned, but we learned that microwave ovens were becoming more prevalent in the late ’70s. A couple of Casey’s exclamations felt a little out of time too, but that might just be Strayans being Strayan. 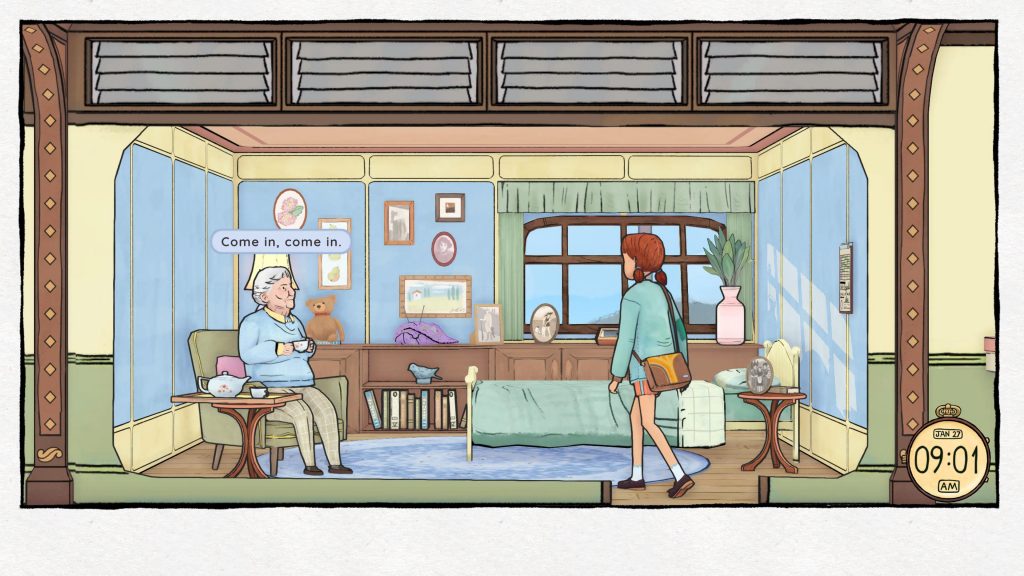 A few little technical issues like characters clipping through furniture are evident, but it’s nothing particularly gamebreaking. The slow pace might not be to everyone’s taste. The fact that the autosave only kicks in at the end of each day is a weird thing, especially when an in-game day can take an hour or two, dependent on how long you faff around reading your notes. When game warns that you’re likely to lose progress if you quit out, you become a little wary of exiting prematurely otherwise. Or you use the PS5’s suspend function and hope you’re not hit with a system update. 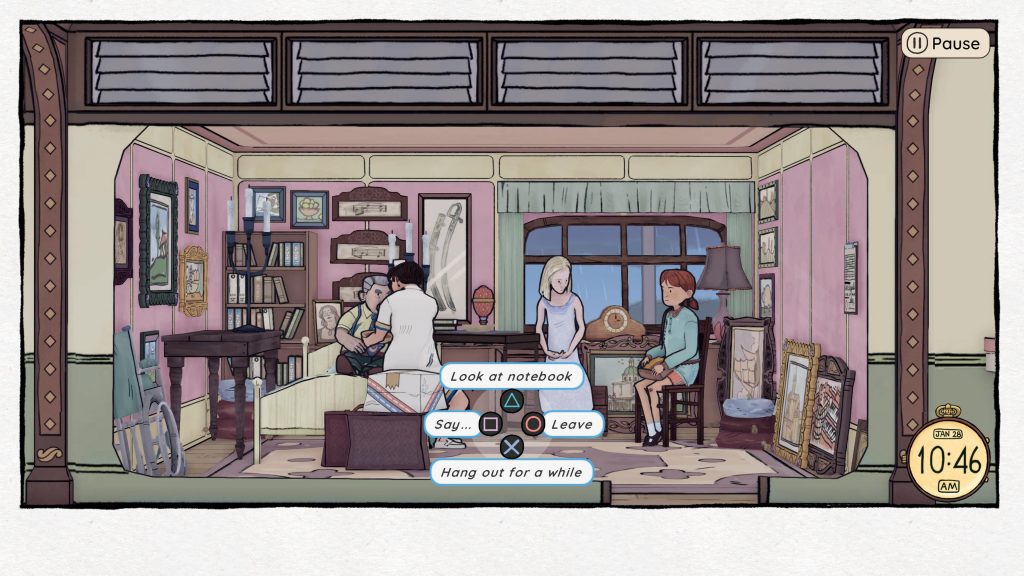 In conclusion, Wayward Strand is a lovely little curiosity that we didn’t expect to enjoy quite as much as we did. The charming voice acting and delightfully naive graphical style make for a breezy light experience, albeit one that is sad at times.

It reminded us of hospital and hospice visits as we gradually bid farewell to our own loved ones, for that alone it had us engaged a little, if not actually having us relive that directly. We recommend you perhaps check out a video of the gameplay if you’re not entirely sure if this is for you or not.

Wayward Strand
8 Overall
Pros
+ Conveys the awkwardness of visiting elderly relatives in hospital very well
+ Well scripted and voice acted
+ The feeling of life going on despite any input from you is good
+ You'll become genuinely fond of the patients and staff
Cons
- The slow pace might not be for all, but that's fine
- Autosave only takes effect at the end of each day, which makes dipping in and out hard
- Occasional clipping as characters walk through furniture
- No, we don't want soup!
Summary
Wayward Strand is a lovely graphical adventure with the feel of a whodunit in some ways. The charming Aussie voice cast conveys a great sense of place, just as the design does a good job recreating that awkward waiting around in hospitals feeling. It's recommended by us, but it might not be your cup of tea either.