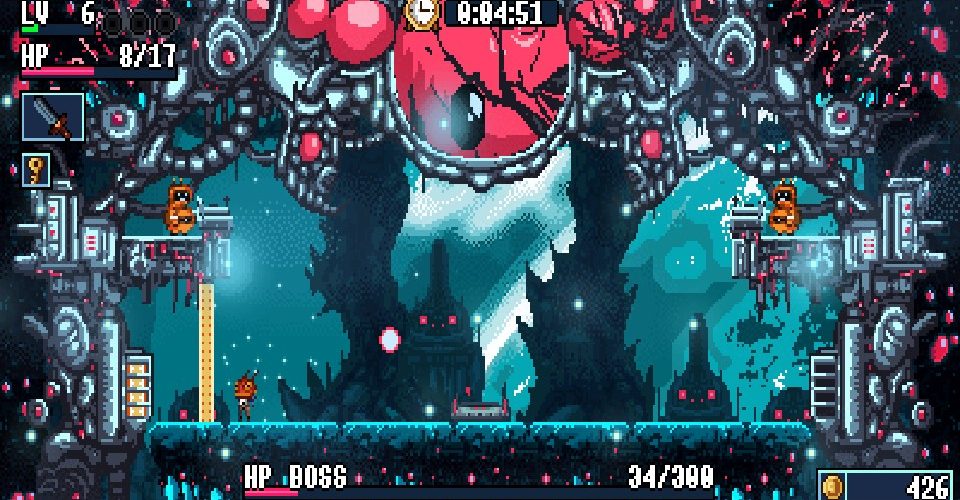 Xenon Valkyrie+ is a retro tinged, 2D platformer, rogue-lite. We’ve had a boat load of rogue-lites, and rogue-likes, and in such a heavily saturated genre doing something to stand out from the crowd can be pretty tricky.

Presentation is very good in Xenon Valkyrie+ and right from the title screen there is some excellent art work on display.  The game looks cut from a 16-bit cloth and is accompanied with some equally retro chip tune music. It’s a very accomplished game and nails the retro feeling perfectly. There is also an interpolation option to give the game another style choice.  Overall it is really well presented. 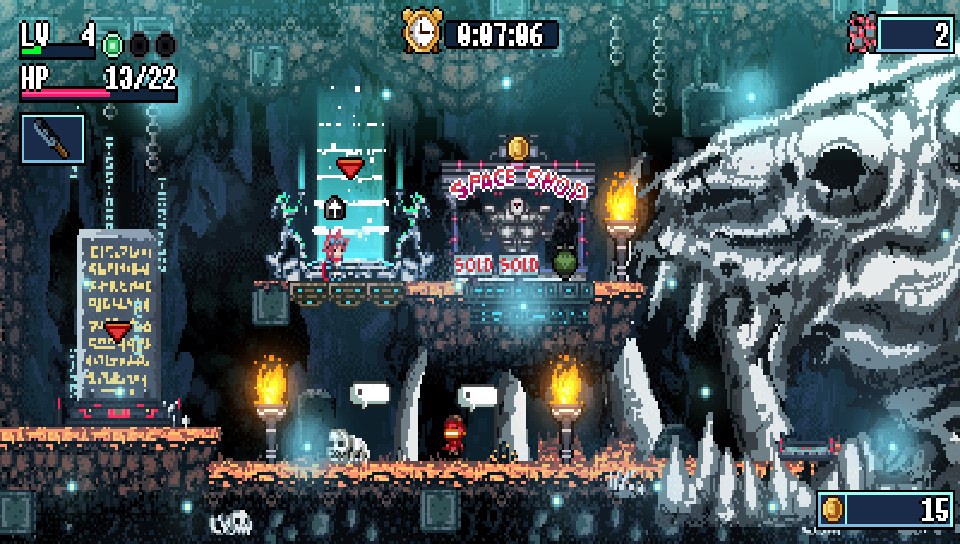 You control one of three heroes who’s mission it is to delve deep underground to defeat an evil witch. Each hero has different starting statistics, more health or defence for example. Whilst these tiny differences don’t look much they can have a big impact in your progress. This is because after each level you get to spend upgrade points improving these base stats, and the game doles these out in small enough numbers to make every point count.

Each level is randomly generated, but based round specific themes. So the backgrounds and pallette stay the same but the platforms, enemy placements and weapon drops are all random. I’ve a mixed history with random levels as often they can feel too haphazardly put together, but in Xenon Valkyrie+ they do sort of work. I think its because they keep it simple and the levels are easy platforming affairs. Every couple of levels there is a boss fight, with proper screen filling sprites, which act as the end of each zone. 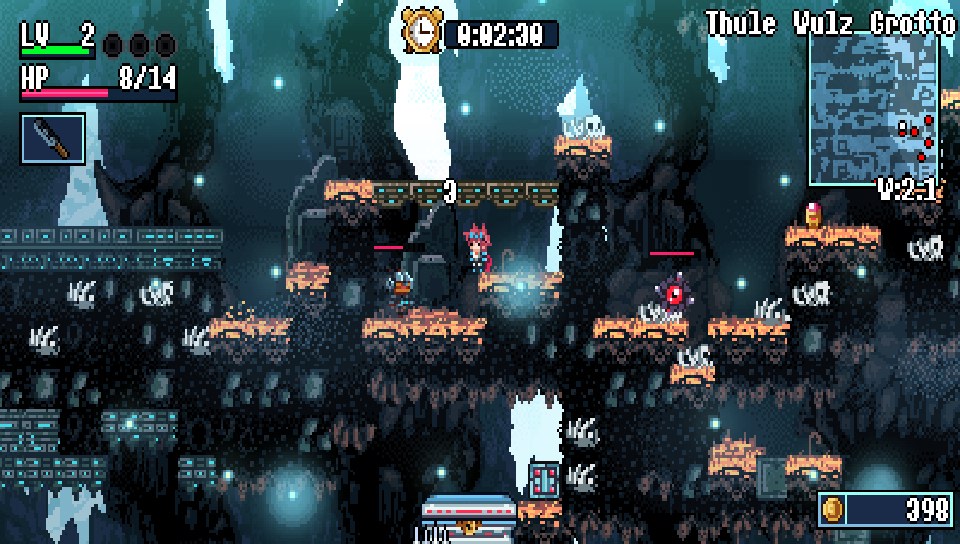 Being a rogue-lite when you die you lose most of your progress. Crystals you earn from bosses are carried over to allow weapon unlocks, which could be located in subsequent playthroughs and you can unlock warps to each zone, but that is all. Your character is cast back to level one and must start again. This is a very harsh loop for a rogue- lite and personally I find it too punishing. No permanent stat upgrades makes this a difficult game. I was reminded of Vertical Drop Heroes  which was a very similar rogue-lite game, but one I felt had a fair difficulty curve. 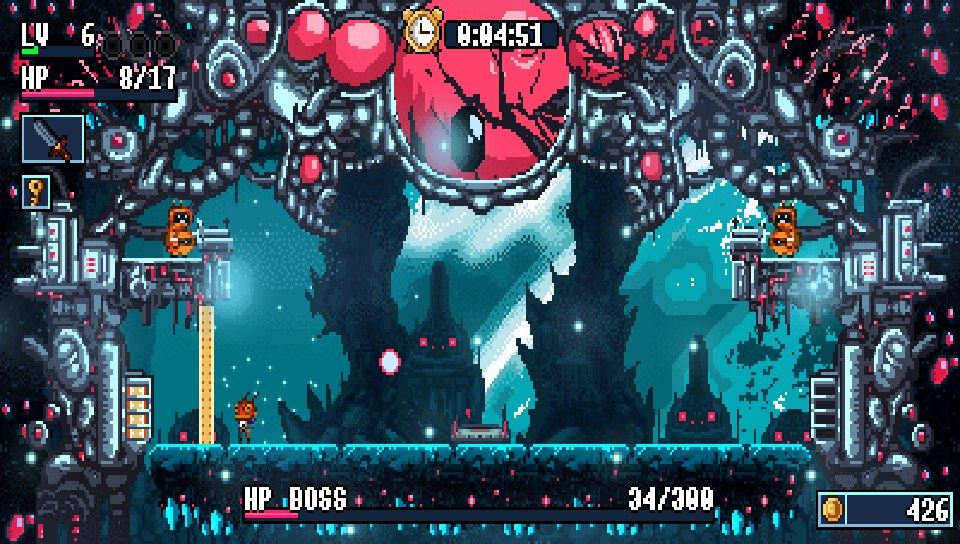 Vertical Drop Heroes had a great progression system, banking upgrade points and gold between runs.  Xenon Valkyrie+ doesn’t have this. What this means then is that there is no overall sense of progression between runs, and you feel as weak as a new player every attempt you make. I know there will be a certain crowd who enjoy harshly difficult games like this, but for me Xenon Valkyrie+ would have been so much better had it been just a little easier.

Control is tight with a melee attack a ranged attack and grenades. Actually playing the game is fun and runs can be over fairly quickly. But the reliance on random levels meant some of my runs failed due to unfair odds, and not necessarily anything I did wrong as such. It was when this happened I just started to get a little annoyed with it. A feeling which is never great when playing a game. 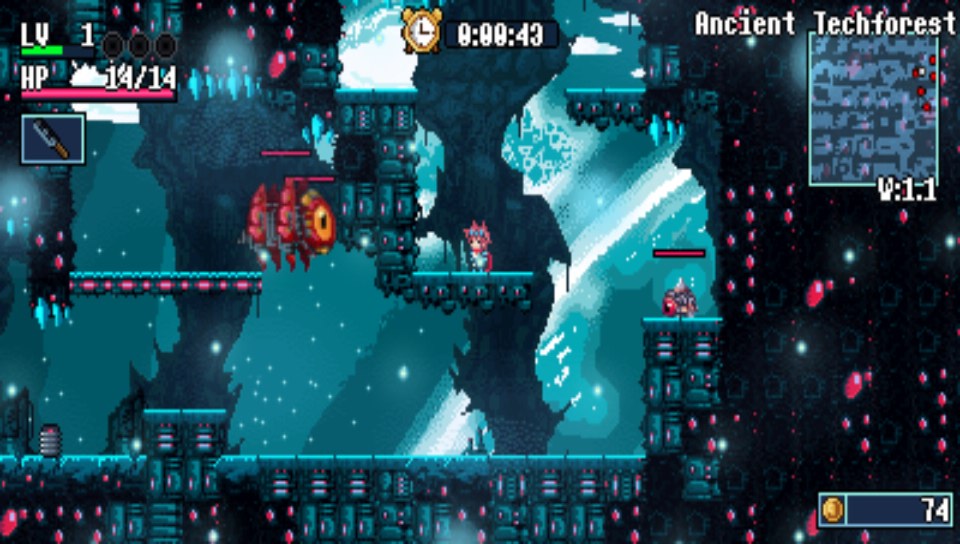 Xenon Valkyrie+ is an ok game and I’ve found myself going back for one more go, hoping for a better run, which is always a plus for these rogue-lites. Unfortunately the high level of difficulty ends up frustrating my enjoyment. As a quick pick up and play game you’ll find fun here for a bit, but in the end it never really does enough to stand out in the crowded rogue-lite genre.

Cons
- Can be too difficult to actually enjoy.
- Random nature of the levels can give some unfair runs.
- For a rogue-lite there is hardly any carry over between runs.
Summary
Xenon Valkyrie+ is an ok game and I've found myself going back for one more go, hoping for a better run, which is always a plus for these rogue-lites. Unfortunately the high level of difficulty ends up just being frustrating. As a quick pick up and play game you'll find fun here for a bit, but in the end it never really does enough to stand out in the crowded rogue-lite genre.