One of the benefits of living up north is that you’re never too far away from remnants of our Roman past. As a kid, I’ve been dragged to forts and hopped over Hadrian’s Wall into Scotland. Fully Illustrated are looking to shed more of an educated light on this brutal part of Britain’s heritage with Wulverblade‘s impending release on the Playstation 4. Having made a splash on other systems last year, we’ve been looking forward to it. 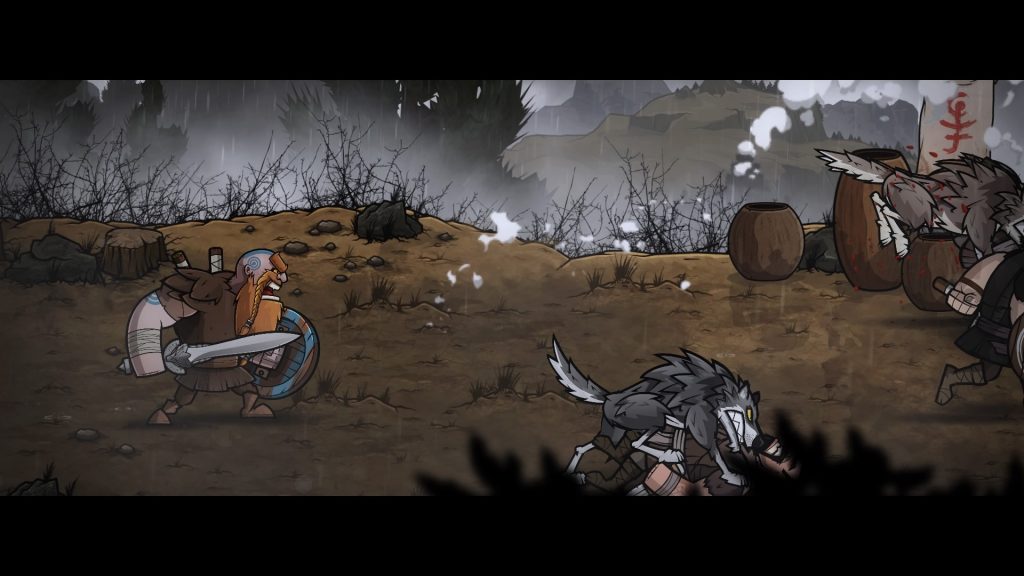 Wulverblade‘s emphasis on story is bolstered by a fair amount of historical research. Focusing on the Roman occupation of Britain and the northern tribes’ revolt, you can control one of three heroes tasked with forcing back the imperialist swarm. It’s a bloody conflict and there’s plenty of notes scattered about to fill you in on the factual elements. It’s nice to see a beat ’em up take such an approach with plot. It comes together cohesively with a satisfying conclusion. Your heroes have ample motivation to fight against a constant backdrop of war. There’s some fantasy, folklore elements which play their hand but, for the most part, the game remains steeped in a sense of reality. It’s accompanied with a nicely delivered narration which sells the drama appropriately.

Your three protagonists cover some traditional archetypes. Caradoc is a jack of all trades with decent stats across the board. Guinevere is quicker on her feet and with a blade but lacks resilience. Brennus is all about power. You can pick your poison but I found Caradoc to be the more balanced of the trio. There’s some subtle move changes between the characters but they largely play out the same. Hack, slash and block away. 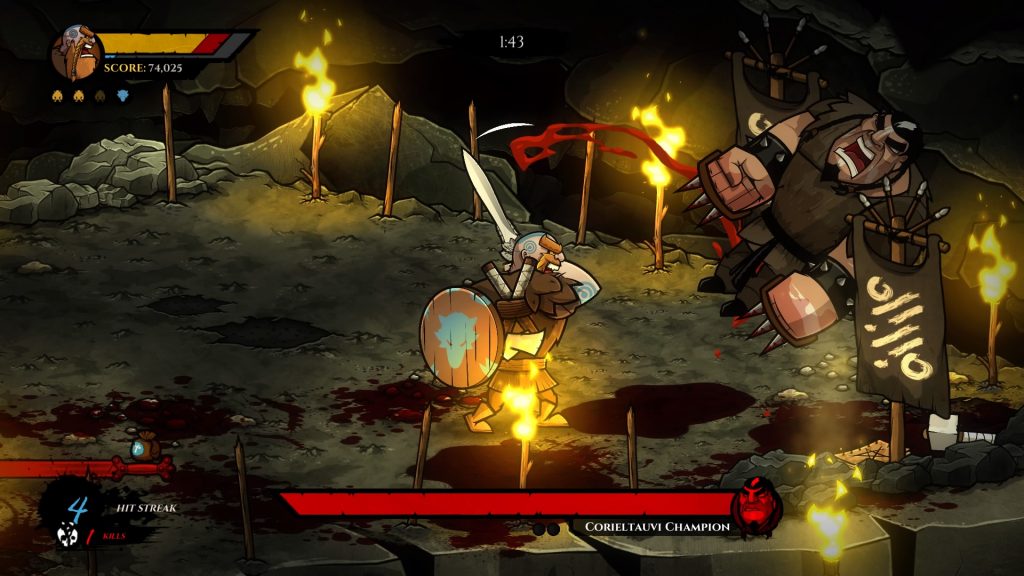 Standard strikes come in normal and heavy varieties with the latter only available to you after you pick up the appropriate weapon. Grabs and grapples are context sensitive so, whichever way you slice it, you’ll spend a lot of time hammering out basic punches at hoards of enemies. You can mix it up with running charges and downward strikes which are essential when dealing with the bigger brutes.

Defensive options come in the form of timed blocks and dodges. Whilst the game does telegraph incoming dangers, I still feel the timing required is a little tight. This can become a problem if you’ve already committed to attacking. Not only that but no moves at your disposal offer any invincibility. I’ve played a lot of classic examples of the genre lately and you don’t realise how crucial a grapple’s invulnerability is until it’s not there. As a result, you can be hit out of attack strings in Wulverblade. When you’re in a crowd, it can spiral into a bad situation. On one hand, it forces you to protect yourself and think about group composition but it can lead to moments of genuine frustration. 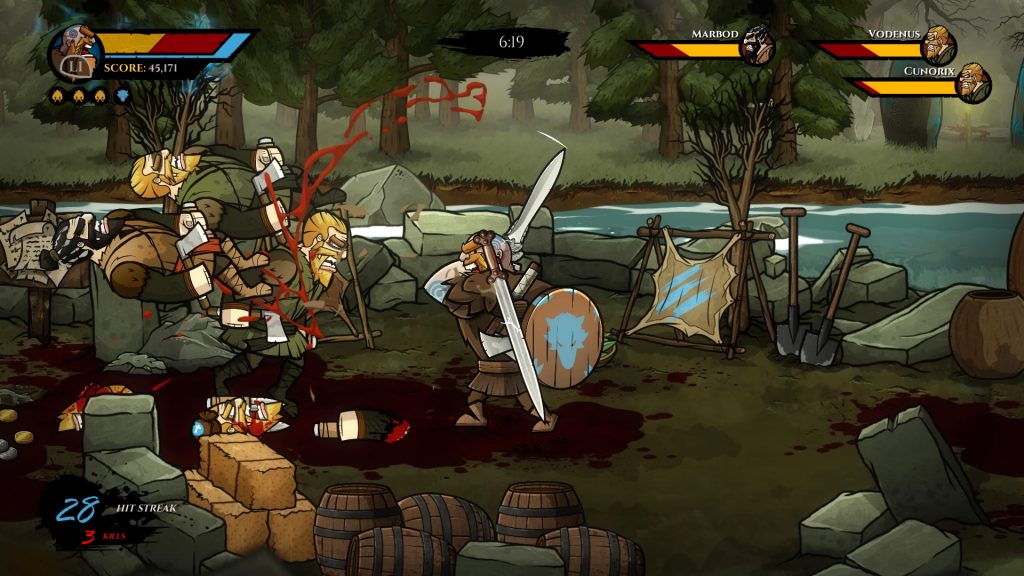 You have a couple of tools left to your disposal which can thin the numbers out. Your rage meter fills up with each successful attack. Once full, you can enter a state of invincibility where you can attack to your heart’s content. Hits and kills restore your health so it’s wise to use it when times are tough. You can also summon wolves to assist you once per level. This acts as a quick way to end fights so has to be used strategically.

Slain enemies drop pouches to refill your rage, jewellery and coins for score and food for health. They also drop weapons which can be equipped temporarily, thrown or used to enable heavy attacks. Picking up most of these items requires you to tap on square. Given that this doubles as your main attack button, you can see the battlefield becoming cluttered with the spoils. If you need a health pick-up amidst a pile of severed body parts, you might be hammering square in the hope of finally landing on some grub.

The stages do help portray a journey, even if you’re spending most of it within the Scottish countryside. There’s the occasional moment of beauty as you batter foes against a sunset backdrop and the visual treatment does make good use of perspective as enemies and wildlife scamper through the background. The cartoon aesthetic does well to contrast with the very gutsy brutality of Roman Britain. Originally, I didn’t care for it but there’s some flourish and craft to it and it moves swiftly. 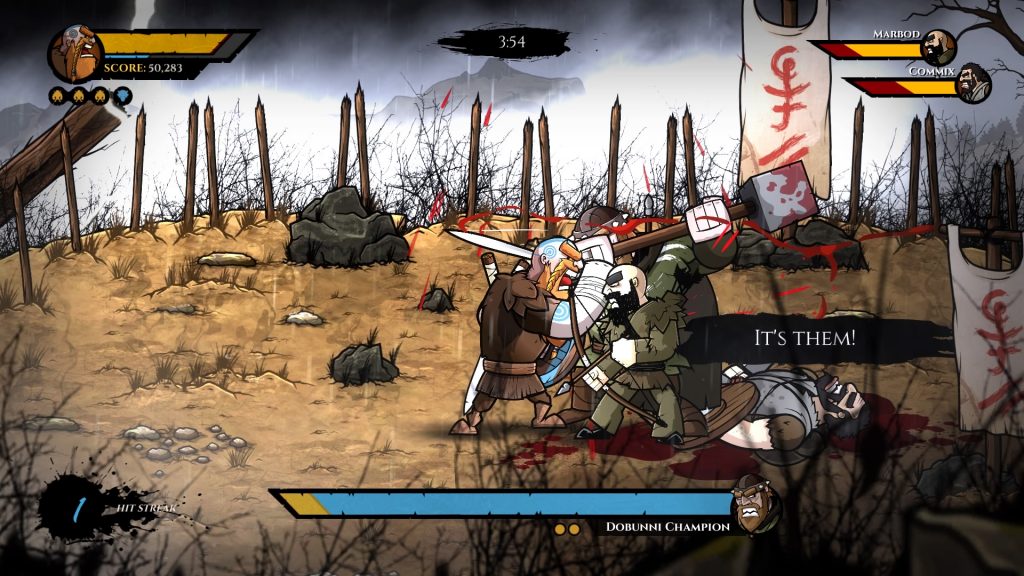 You can progress through three modes of play. The standard campaign is a checkpointed affair that also offers an easy mode. It’s been a welcome addition with the combat proving unforgiving at times. Arcade mode is effectively the same deal but with three lives and three continues being all you get for the game’s eight stages. Finally, there’s an arena mode where you battle waves until death. Should it prove too much for yourself, local co-op is available across all modes. Arguably, that helps take the edge off when you’re cornered. Being able to divide and conquer with friends is always welcome.

I find this game can be recommended with some reservations. I find the combat fun in its simplicity but there’s definite points of frustration that arise when dealing with groups that can melt your health in seconds. Defensive options are available but they never feel dependable enough to stop you from trading hits. The plot and well-researched historical setting give Wulverblade something other brawlers can’t match.

Wulverblade
7 Overall
Pros
+ A well-researched story.
+ Strong campaign with varied bosses.
+ Fun, simple combat.
+ Beyond the cartoon looks there's touches of artistic flourish.
Cons
- Unforgiving, at times.
- Defensive options seem to require a tight timing.
- Stages can be needlessly cluttered after a few kills.
Summary
I came out of Wulverblade feeling broadly positive. The historical aspects add a lot of context. Combat can be simple but frustrating as you charge through Caledonia's woodland. Some curious design choices undermine battle but it does provide something different. It's worth a look if you want a little more substance to your beat 'em ups.