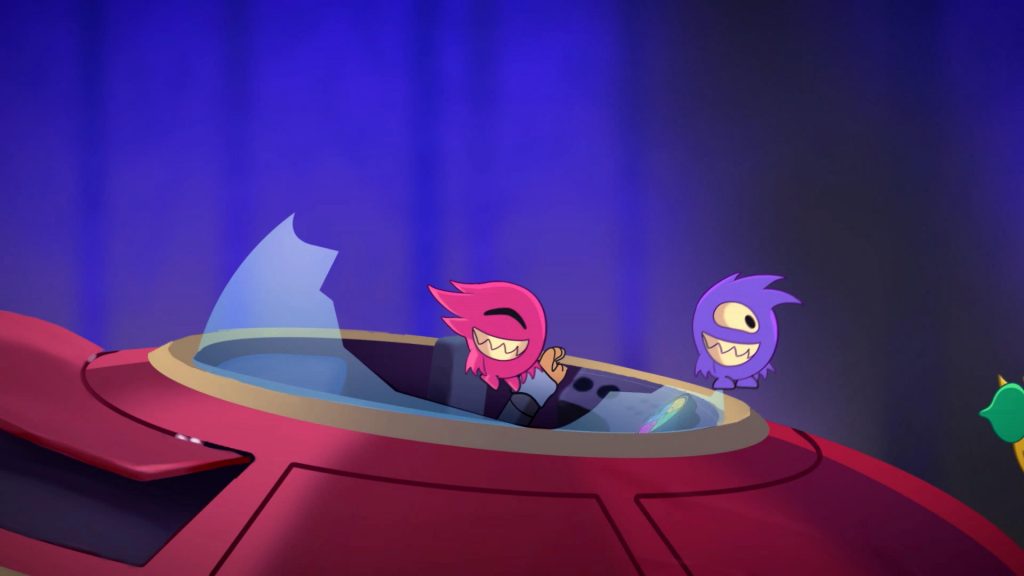 There’s something to be said about how indie games of today and how diverse and unexpected games are, compared to the AAA efforts of recent years. I like to think of Indie efforts as a direct comparison to the bedroom coders of years past. The type that introduced impoverished gamers to the likes of Hungry Horace, Jet Set Willy and Head Over Heels back when gaming was as much about experimentation as it was about chasing the newest graphical or technical ideals. Some of the finest experiences that we enjoy today evolved out of these formative years, yet the innovation that drove the industry back then, seems to have all but been neutralised by copycat projects and by-the-numbers releases, which sadly, is also true in a portion of the Indie space.

A lot of this comes from how the industry does business today. Games are a product and as such, there will be companies out there that will insist on distilling gameplay into something that can be sold as something that will engage you, keep you there and hopefully earn a few pennies extra while they have your attention. You need only look at the swathe of mobile titles that copied flappy bird or Angry Birds to get a good taste of this. For the buyer, it has made certain titles and gems a bit harder to discern from the shovelware. When it comes to today’s review, featuring World Splitter by Neobird, I am ashamed to admit that I too thought that this could have been a bargain bin title, with the sole intention of its being to make a bit of cash before I would lose my will to care and move onto the next mark.

It’s not difficult to see why I felt this way. World Splitter is not what we would call an arthouse spectacle and the screenshots reveal this capably. It looks like a flash title you would find at the higher end of late 00’s Newgrounds, or on the mobile stores in the top forty of the highest grossing apps. However, after diving a bit deeper and sitting myself down to playing the game, I realised that this wasn’t what I had expected, and was reminded of those bedroom coder days where non assuming visuals made way for genuinely thought out and well implemented, clever ideas. 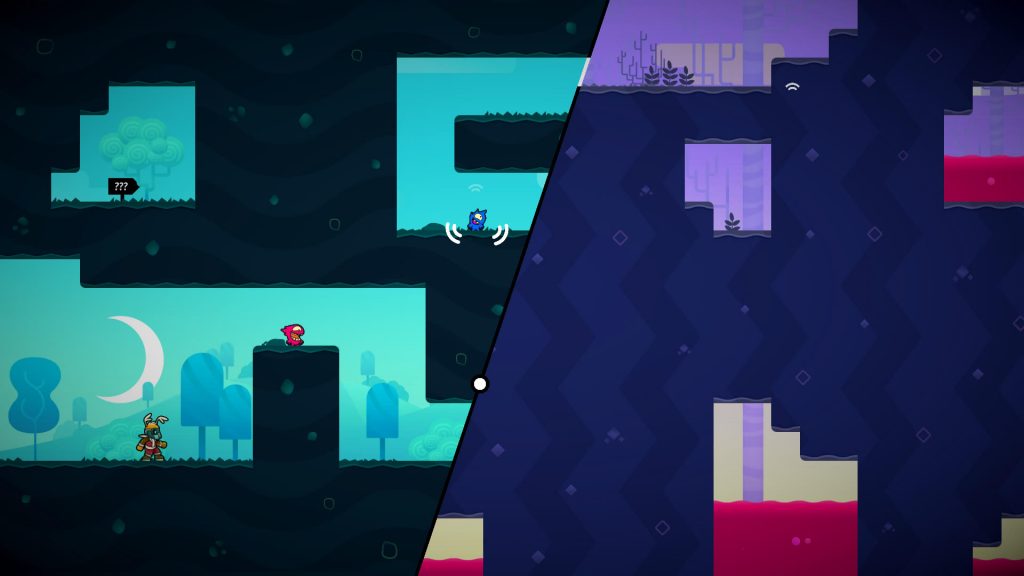 World Splitter sees you taking control of a nameless, voiceless spacefaring protagonist that lands on an unknown planet, only to be immediately set upon by mischievous, colourful blobs that have taken the astronaut’s technology and ran off with it. Part of this tech is a tool that allows the space traveller to cross over dimensions, letting them see and traverse alternative versions of the locations they find themselves in. The central mechanic of gameplay revolves around this concept, with a dividing line splitting the screen, with the player having to wipe the line across, revealing/concealing platforms, enemies, and obstacles in a bid to reach the other side of the screen.

It’s a simple yet clever mechanic that is well used throughout the game and makes for some great puzzle gameplay. At first, each level may seem untraversable due to blocked off exits or unclimable hills. However, rotate and move the dimension line into the correct spot, and the previously unpassable mountain will now become a gentle upward incline that the astronaut can use as a staircase, or even a rising elevator (with the correct input) to reach to previously unreachable places.

In terms of escalation beyond this idea, there is a fair amount and things get revealed gently over the time spent on the sixty levels included in the game. Pure platforming makes way to gravity manipulation, where revealing one-dimension changes to downward force and has you walking up walls to get to the next point. Later, enemies start to appear, with spiked ball robots having to be herded into traps and obstacles before they can get to and do damage to our hero. 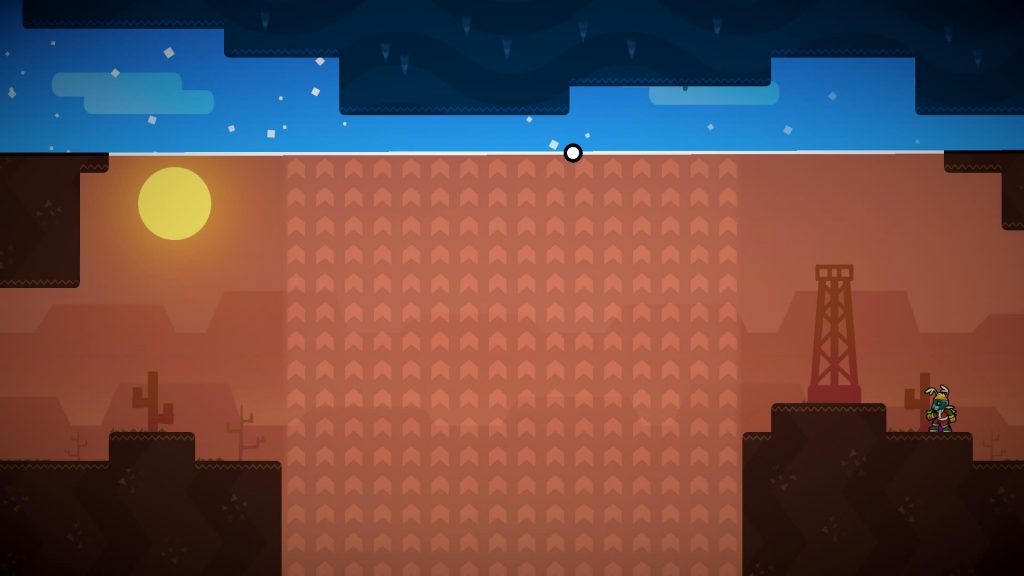 For stakes, there is not many. At the core of it, the game only needs you to get from the end of one screen to the other, but there are ways to challenge the player further. Firstly, there are the colourful blob characters that be found and rescued through each stage, some in difficult to reach spots, while others give the player a good indication of where to go or what to reveal next. The player can also challenge themselves with trying to speed through levels as quickly as possible or to complete a level with only the most minimal use of the dimension line, being judged by the amount of rotation used per stage. So, there is plenty to do and if you catch the bug for World Splitter, this offers a hearty challenge to master for personal satisfaction and trophies.

Unfortunately, counter to this well used world splitting mechanic are a few gameplay foibles. The character you play at is a bit useless. The astronaut has the weediest jump imaginable, making the ability to clear platforms both a bit annoying and a chore, as you need to try and get the dimension line just right to help them clear the gap. There is also a lot of inconsistency with the rules on what kind of movement is allowed and what isn’t. This was highlighted strangely in an earlier level, where I found myself in a tightly closed space after forcefully shifting my character through a dimensional wall, only to be greeted with a message of “this is not a bug, speedrun strats” and a trophy for my trouble. The issue I had with this is that I could rarely find any more cases where this would work again, not without my character dying from being crushed as a result. I may be wrong, or I may be missing a joke here, but that felt very much like a bug to me.

There is also, somewhat obviously the healthy portion of frustration to be encountered with World Splitter, being a puzzle game with shifting mechanics. Even after spending a good few hour and feeling like I had got the hang of things, it was still too easy to make mistakes and end up crushing my character near the finish line. This is caused in no small part to my clumsiness sure, but also the fact that you must drag the dimension line cursor across the screen and imprecisely rotate this with the Dualshock’s triggers. With this control method, it is way to easy to over or undershoot, causing the astronaut to be smashed against earth or flung into a lava pit with little warning. The mechanic feels like it would be better suited to a more organic control method, such as touchscreen on a phone, however this is not to say that this is broken, instead it just takes some more getting used to than i would have initially thought. 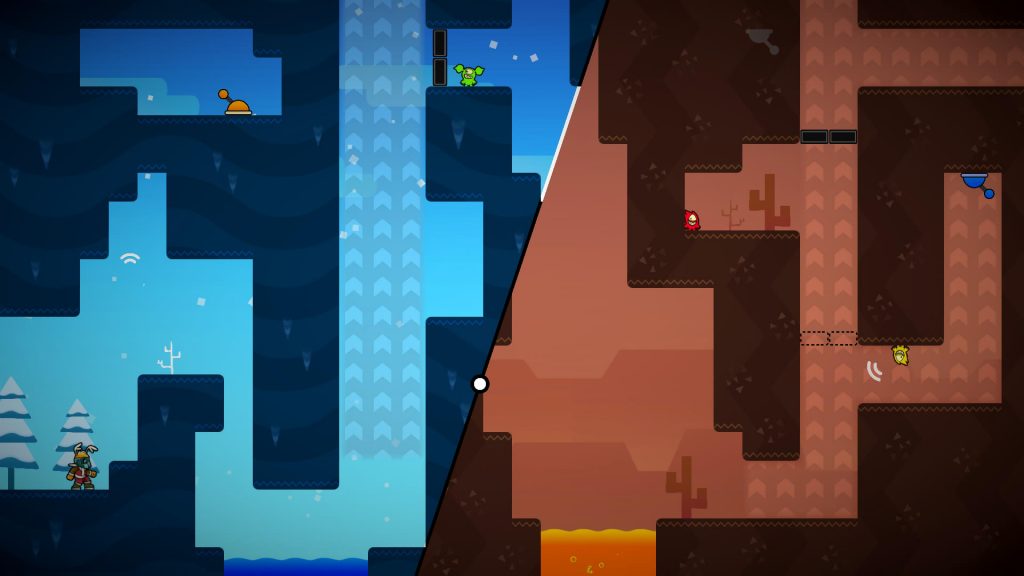 Get through these gripes though and you have a solid puzzle platformer that features some genuinely innovative gameplay ideas. While it may never reach the echelons of some of the classic indie titles of recent years or wow visually. Yet,  World Splitter is a title that proves that there are still fresh ideas out there that can be implemented well enough and provide a fun experience that can be enjoyed short bursts.

World Splitter
7 Overall
Pros
+ Clever use of the central dimension shifting mechanic
+ Varied mechanics that keep gameplay fresh enough through the short lifespan
+ Plenty of challenges to come back to, should you enjoy it enough
Cons
- The presentation and audio are very basic
- Feels glitchy at times
- Would have felt more at home on mobile formats
Summary
As a solid puzzle platformer title with an innovative dimension shifting mechanic, World Splitter almost has everything it needs to be a new Indie darling. However, overly simple presentation and occasionally frustrating moments hamper things somewhat.