Are you a fan of challenging 2D platformers? Maybe you have a fondness for ActRaiser? Smelter, just released on PS4, hopes you are and does a pretty good job across the board of providing for both. 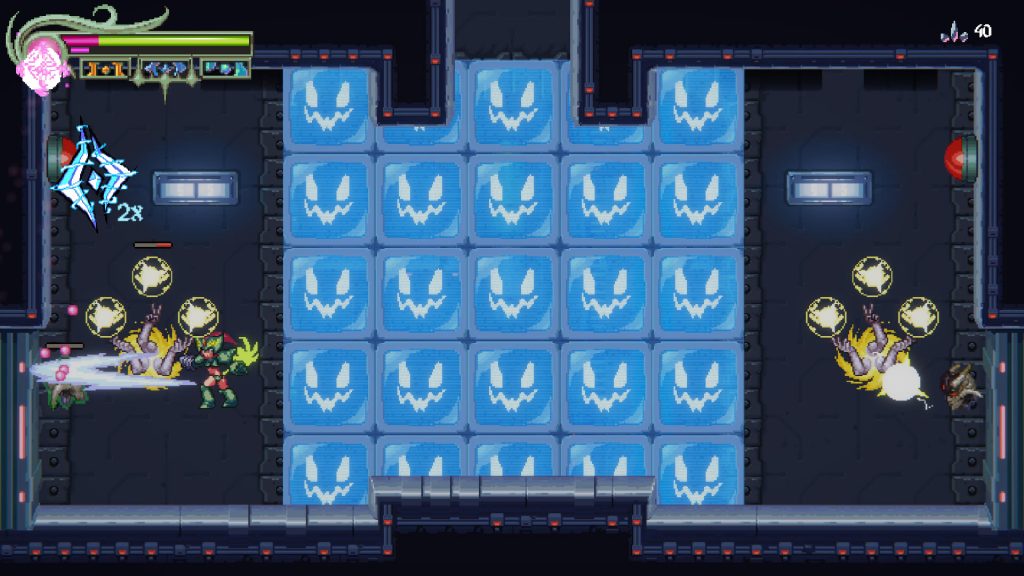 The game opens with Adam and Eve. An apple drops from a tree and Adam walks over and takes a bite, bringing down the wrath of God. Adam then goes missing so as Eve you set out to find him. Shortly afterwards you encounter Smelter, who merges with you gifting you the power you need to search for and find Adam. The story doesn’t really veer from this until the end, but you’ll meet a few side characters on your adventure who all have their quirks. Eve doesn’t talk but Smelter will act as your mouthpiece and is quite the irreverent guy.

You’ll start the game as a 2D scroller but shortly after that you’ll be on a map screen. Here you’ll control Smelter, flying around and claiming land. It costs an automatically resupplying resource to claim each square of land and build on them. Build houses and Zirms will be spawned to live there, these can then be put to work. You need apple towers to feed them and one Zirm to work there, others can become soldiers or archers depending on the building you create. These are needed as monsters will come and attack your buildings and although you can shoot as Smelter his attacks are pretty weedy so you’ll need the backup, especially as monsters can spawn even when you’re not in the region.

On the map you can also claim special locations which will buff certain stats or give Eve more moves, but the map is gated off by rocks which you’ll need to gain specific powers for Smelter to be able to break. You gain these by going into levels and getting the rune at the end of it. This is where Eve and the 2D platforming sections come in. 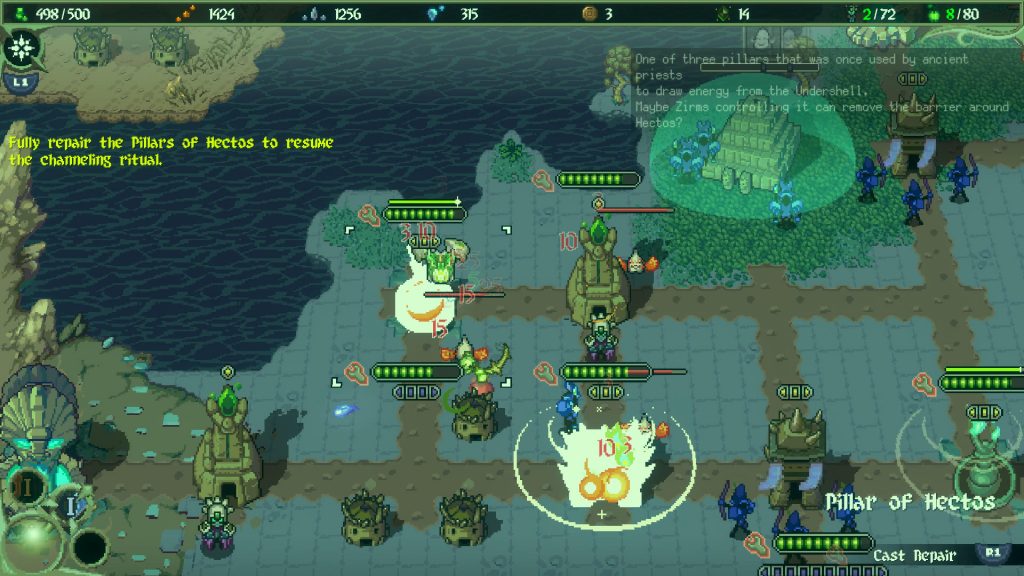 Initially Eve will only be able to jump and kick but very, very quickly you’ll find one of the runes and gain one of three powers which you can switch between with the triggers. Each has it’s own attack and movement abilities with each being suited to a specific region of the map, but nothing is stopping you from using others if you want which can lead to you getting around things in a way that is unintended, which is always fun.

You can always wall jump and dash a short distance like in Mega Man X regardless of which weapon you have equipped but the first one you get is a claw attack which is strong but short range. This then grows as you progress to allow you to cover yourself in rocks to add weight, deflect projectiles, cling to walls and double jump. There is a whip like attack which is faster but weaker, and allows you to teleport forward to avoid hazards and attacks, jump out of a dash to extend your jump and allow you to run up walls. The third is a Mega Man style arm cannon which is the weakest of the bunch but has the longest range. This comes with the ability to phase out for a brief moment to pass through barriers and attacks, dash in mid air and hover.

Levels involve plenty of platforming, some pretty complex by the end, and defeating enemies. Enemies tend to take quite a few hits so choosing the right weapon for the type and amount of opponents is important. As well as granting you your powers Smelter also has the ability to shoot out an arm which can grab anything that glows green. This can be projectiles, bars to pull yourself in that direction or, sometimes, if an enemy dies they won’t disappear but glow green and you can grab them for a health refill. You can only use it when the game lets you so you can’t work it into combos or anything but when it is used it’s an interesting addition, especially against the bosses. 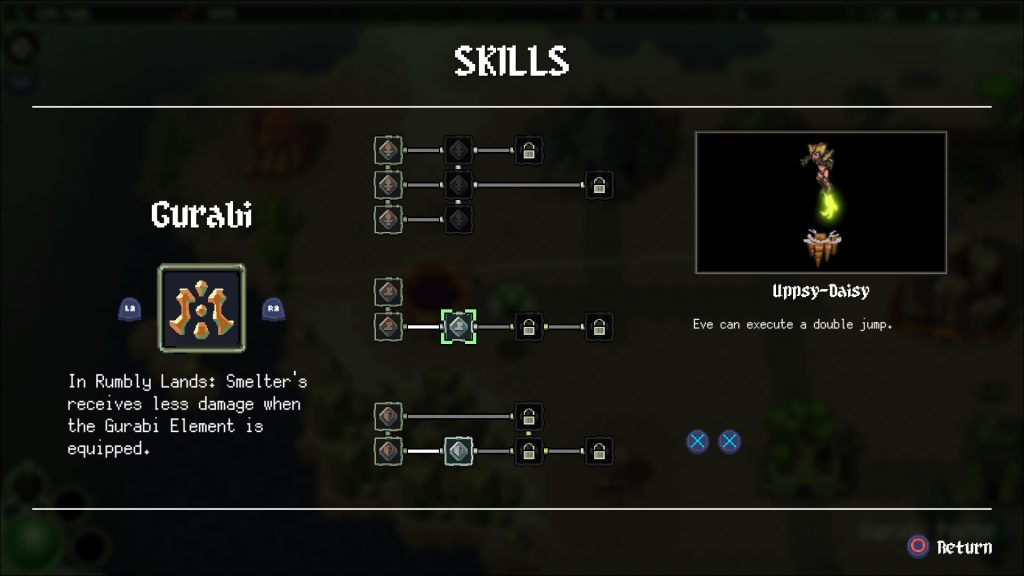 The first couple of stages in each region don’t have bosses but from then on you can expect to face a boss each level. These are your classic boss pattern recognition fights, with bosses rotating through their attacks and you getting in hits when it is safe to do so. As the boss loses health they’ll start to change things up slightly, usually the same attacks but quicker or with more hazards, and each can take a while to defeat. Sometimes you’ll get to use Smelter’s arm to throw things at the boss to cause damage, but again only when the game allows.

As you beat levels you’ll get more runes which will let you explore the map more with Smelter, then to access the next level you’ll generally have to hold off waves of enemies whilst something happens, defending the buildings that are charging up. Initially I tried to be tactical or clever but really all you need is enough soldiers to hold off the enemies, positioning doesn’t seem to matter too much. It’s a bit of a shame and robs the map sections of something more than busy work between stages.

There is plenty to do in the actual Eve stages though, as each has a few of three different objects to find. These are always hidden away behind false walls or through a hole in the ceiling that isn’t too obvious. I was able to collect everything, and you can replay levels if you miss anything, so they aren’t impossible to find. There will often be little tells to point out that there is something hidden, but they do stretch out the levels a bit, especially the more maze-like levels. Although the initial levels took me about ten minutes to finish later ones were taking me an hour or so either through respawning thanks to the difficulty or searching every nook for items. 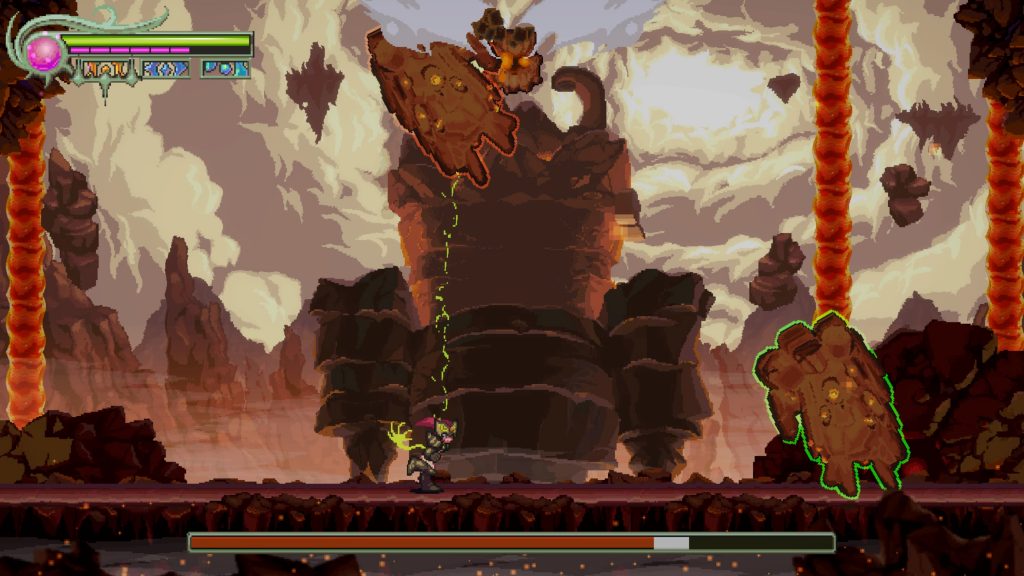 One of the collectibles are actually trials which will test your ability with a certain weapon. These can range from not getting hit, killed or spotted by the enemy and they are timed. Unless specifically stated the time doesn’t matter and just getting through will net you the reward, but some of these are very tough. They’re built to be incredibly difficult, you can even try to complete them on the main map screen once you’ve found them as the developers obviously realised that some people would give up and want to get back to the level at hand.

In fact the difficulty is worth mentioning. I like challenging games, especially challenging platformers, but Smelter veers too much into tedious territory at times. There’s fun difficulty and then there’s challenge which either asks too much from you at once or the controls struggle to deal with. Checkpoints are fairly regular thankfully but there are sections, especially the trials, where you’ll have to do quite a few difficult things in a row and if you die then back you go. The controls are generally fine but when asking for incredible speed and precision the jumping, specifically wall jumping, can fail you which always frustrates. 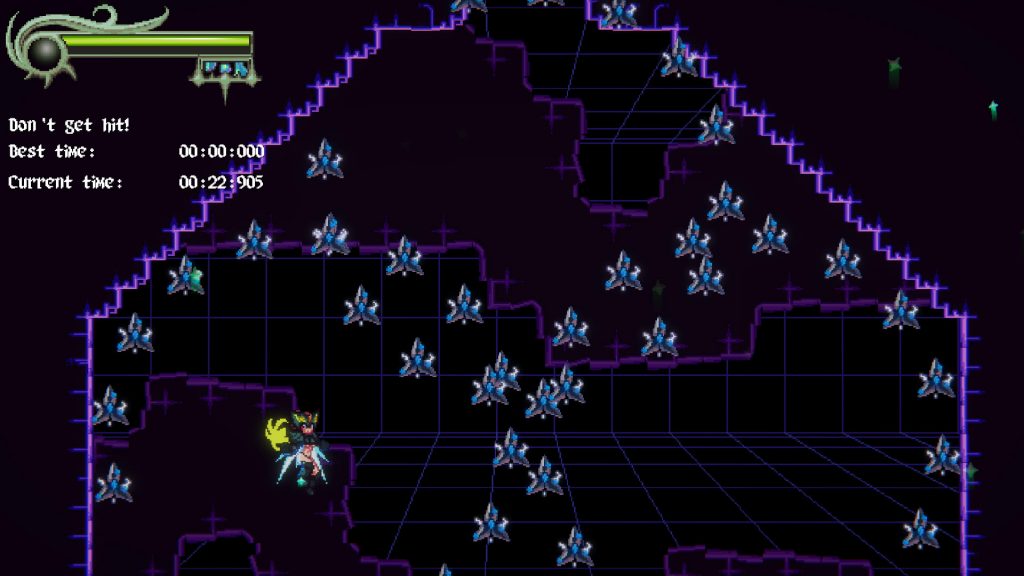 I’m not going to mark it down too harshly for that however, it’s still an enjoyable game and when you do beat a section there is a sense of satisfaction. The presentation helps in that regard, from the opening high quality 2D animation to the 2D sprite work being excellent and the music being top notch. It makes those frustrating moments that little more tolerable. Some people may take offence to Eve’s constant underboob but it didn’t particularly bother me.

Unfortunately Smelter continues the trend of broken games I’ve seen recently. In game there was one stage where it soft locked after a cutscene meaning I had to go through that whole level again after closing the game. I then couldn’t use my Smelter arm which is how you activate checkpoints so when I died I went back further than the checkpoint I’d actually got to, but thankfully that fixed the problem. Then later on Eve was stuck charging an attack so I could not attack for the rest of the level. How I managed to complete it I do no know but I did which thankfully corrected everything. Like I said this all happened on one level and there were no real problems before or after that but that’s a lot to go wrong. There are also broken trophies, I’ve 100% the game and yet some collectible ones have not popped.

EDIT: It has been patched multiple times since release and although annoyingly it didn’t pop all the trophies retrospectively on my 100% save file I was able to get the remaining ones by playing through it again and I didn’t run into any problems like I did first time through. 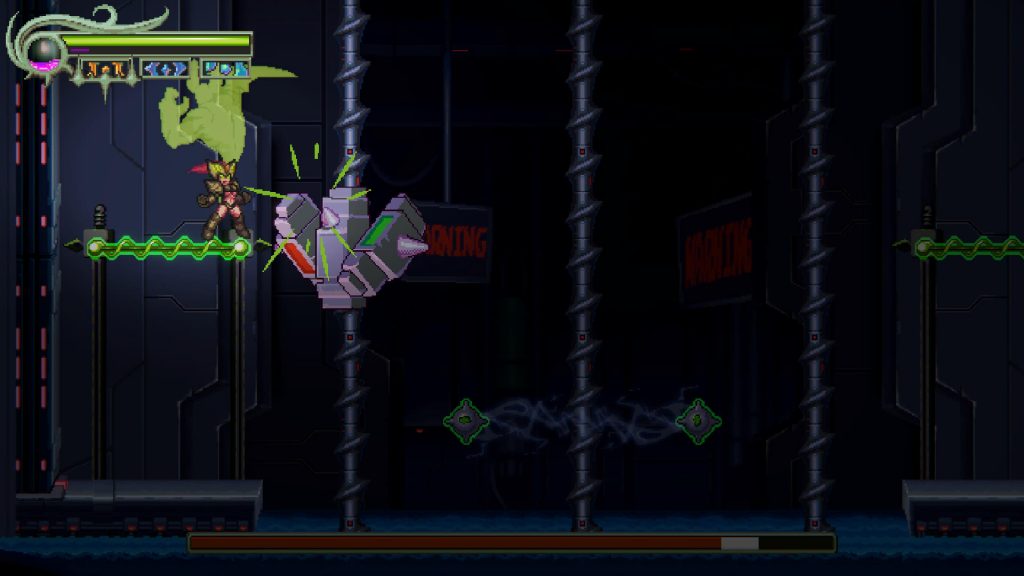 I did manage to finish the game completely though and fingers crossed these issues will be fixed quickly. Smelter is a good game if you like 2D action platformers and want a challenge. Things may get too much for a lot of people by the end but for the right type of player the difficulty, combined with the checkpoints and optional areas, is probably about right. The presentation is top notch and although I wasn’t a massive fan of the map gameplay it broke up the platforming sections, allowing me to take a breather from the challenging gameplay.

Smelter
8 Overall
Pros
+ Enjoyable 2D action platformer gameplay
+ Fantastic presentation
+ Difficulty provides a challenge
+ Plenty of hidden collectibles to find
Cons
- Difficulty veers into tedious at times
- Map gameplay isn't that much fun
Summary
Smelter is a tough 2D action platformer with some less engaging strategy elements between levels. The presentation is great and there are lots of hidden items to find and trials to challenge yourself with, but the difficulty does cross a line at times which is detrimental to the fun.