Warsaw was released about a year ago on PC and has now arrived on PS4. It has quite a few similarities to the incredibly difficult Darkest Dungeon, but has some ideas of its own to make it more than a clone. Most obviously its setting. 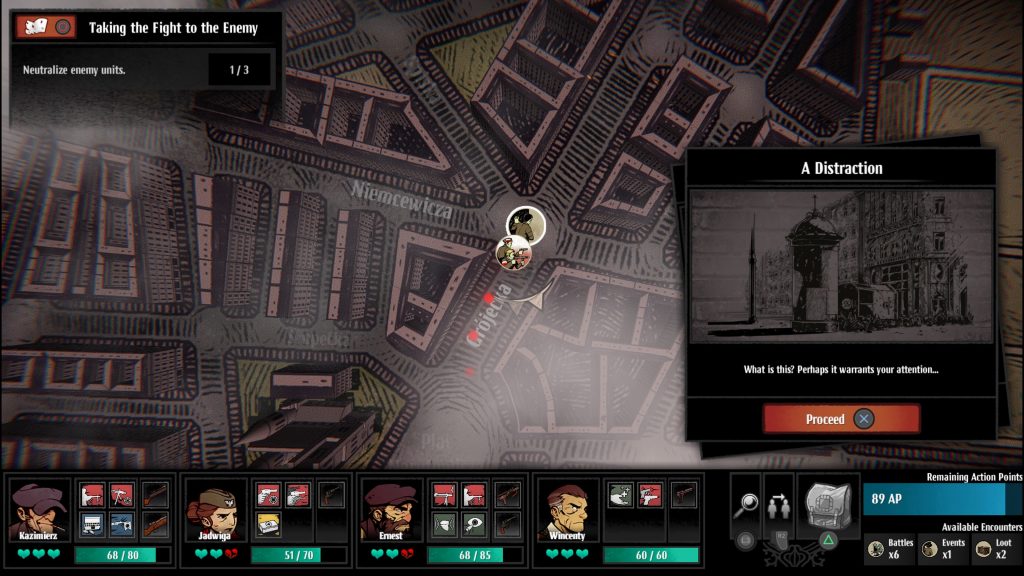 Warsaw is set in Poland, more specifically Warsaw, during the Second World War. The Nazis are already here so you control members of the local resistance trying their best to fight back against the never ending march of the German army. Warsaw is historically accurate so you’re not going to be defeating the army and liberating Poland here, your goal is survival.

Upon starting you’re given three resistance members and a basic mission to get a feel for the mechanics. You view a map from above and move a little icon around to explore the streets. Arrows will point you towards nearby objectives which won’t reveal themselves until you get close enough. These arrows can lead to mission objectives, loot, events or enemies. Enemies will sometimes have a cone of awareness that you’ll have to avoid if you don’t want to fight, though sometimes it will be large enough to make that difficult.

Loot will give you important supplies. That could be ammo, med kits, flare guns to reveal events on the map, as well as other useful items for the missions or supplies which is your currency. You only have a certain amount of action points to explore the map so going out of you way for this extra loot can be risky. Similarly there are events which will give you a choice to make. Sometimes the outcome will be reliant on one of your character’s stats and, scarily, characters can straight up die to these events if you’re not careful. Choices which could result in a death are clearly marked and then it’s up to you whether you risk it or not. Rewards can be items or experience for your characters so they are worth it if you survive. 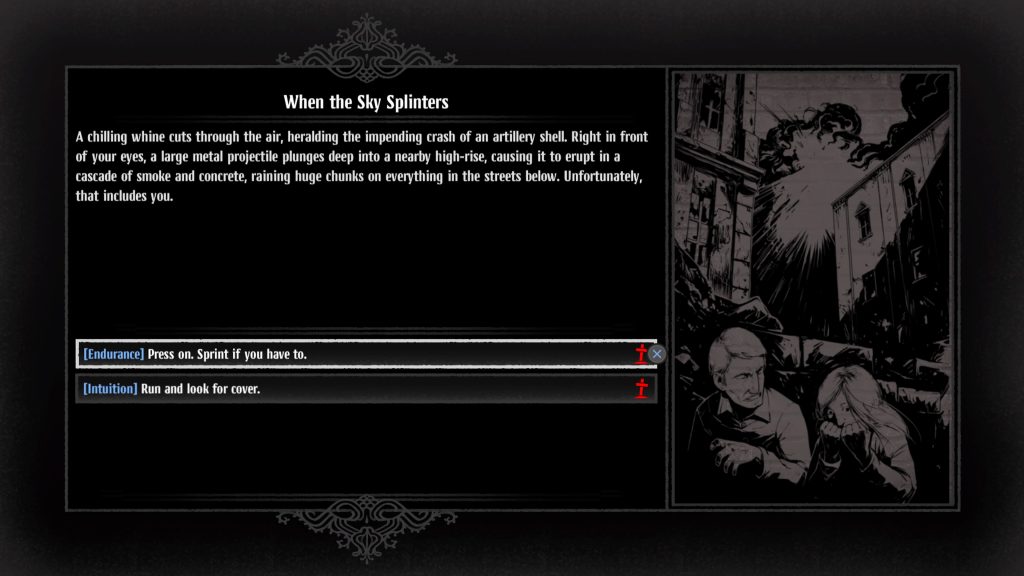 Then we come to the fights which are where the Darkest Dungeon comparisons come in (as well as the visuals which I’ll come to later). Your squad stands on the left and your opponents on the right and everyone occupies a position. There are two rows of four and you can have up to a maximum of four people in your squad. Depending on their weapons and abilities they’ll need to be stood in a specific spot in order to operate effectively, meaning team composition and positioning is incredibly important.

Certain guns and abilities can only target specific areas as well so controlling where your characters are and where your opponents are is an important tactic to deny them moves whilst finishing the fight efficiently. You squad also needs to be balanced, you need damage dealers to take down the enemy and healers as you will take damage, that is unavoidable. You also need a mixture of guns in play as there are short, long and heavy ammo types and it’s all limited so using one exclusively will leave you without a means to attack.

If a character dies in battle or due to an event then they’re gone and the game only autosaves, there are no manual ones. Once you do finish a mission there is an event and then you’ll return to the base. Every few missions a new named character will join. At the base you can use experience to buy new abilities for your characters or upgrade their stats and you can hire recruits, which are helpful to fill out the roster but aren’t as effective as the named ‘heroes’ and don’t gain experience. 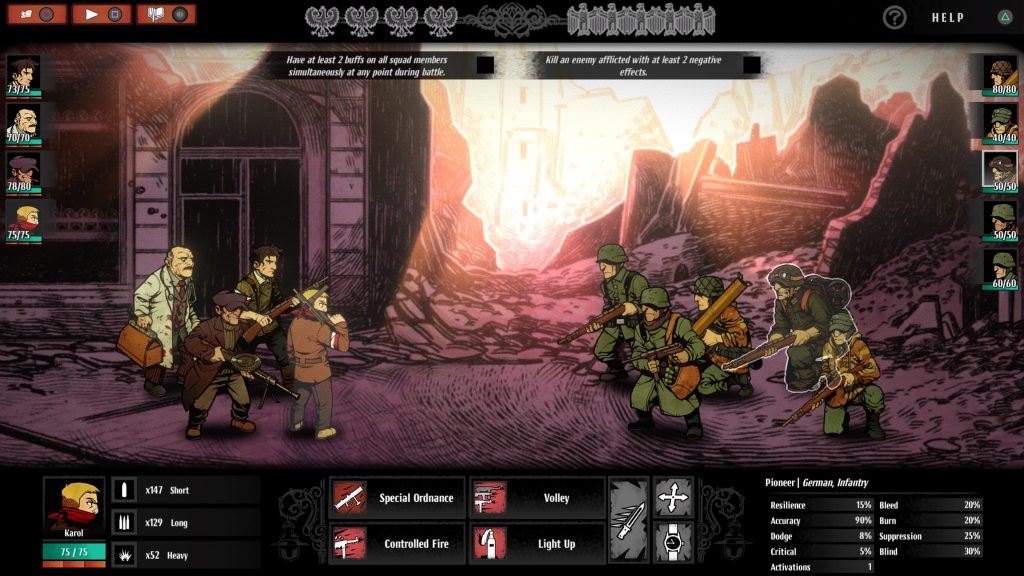 Here you can also manage your supplies, selling or buying what you need but resources will be short. Characters who have been on missions will more than likely be injured which will take time to heal in the hospital. You can take them out but they’ll start at lower health. You can view a codex which has profiles for your characters and background for the events that are taking place. There is also the mission select.

Here you can choose which mission to go on next, spend some supplies to increase morale in different districts or choose not to go anywhere, though this isn’t recommended. As I said, Warsaw isn’t about winning, it’s about survival, so after each mission morale in each district will go down and, similar to XCOM, if morale gets too low then you’ll lose those districts, the supplies they generate and the ability to complete missions within them. Lose all the districts and it’s game over, all those hours down the drain.

The base management is quite light but the battles are tactical and can be stressful. Once your characters are levelled up and you’ve got enough characters to fill two teams to alternate you do get into a rhythm but until then you’ll be trying to balance your health and ammo and completing your objective. My main problem is that there is no end game or goal to work towards. You complete mission after mission and if you last long enough you hit the credits. Yes your characters get stronger, the districts get weaker, but there’s no third act if you will, no build to a conclusion. It’s not as long as its stablemates so I wasn’t bored or anything like that but I was also happy to spread the game over multiple evenings to pace it myself. 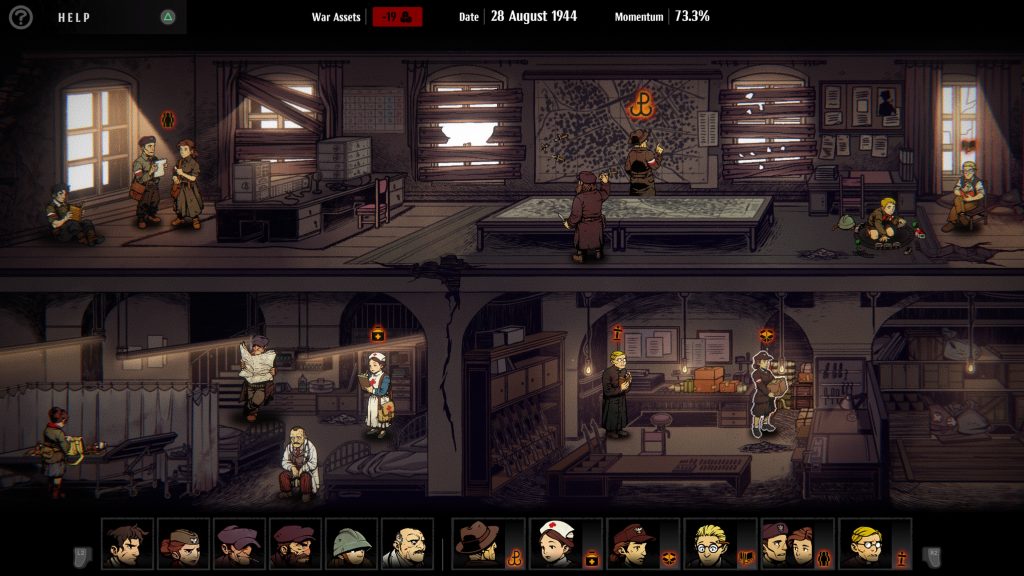 There are many characters and they can’t all be recruited in one playthrough which encourages replayability. Similarly, I did complete the game on my first go but I only had one district left so I’m itching to get back and take what I learned first time through and try to keep more districts out of Nazi hands.

Actually I just went back in for a second playthrough just before publishing this review and ran into a problem. The save corrupted whilst playing. It didn’t crash or anything, just suddenly popped up a message when it was trying to save midway through the game. Unfortunately, despite there being multiple save slots for different campaigns there is only one save file so when I restarted everything was gone. I had a back up online luckily but that’s a worrying situation considering the game remembers things across all playthroughs.

Presentation-wise things are very good. Beyond some rather long load times, even when loading into the many battles annoyingly, everything looks great and the few music tracks there are create the appropriate atmosphere. Artwork is 2D, with a similar style to Darkest Dungeon, each character is unique and there are plenty of enemy types that you can identify by sight. The map screen is simple but does the job and the base is static but grows as new people join, though it’s not the most intuitive to get around but you get used to it. 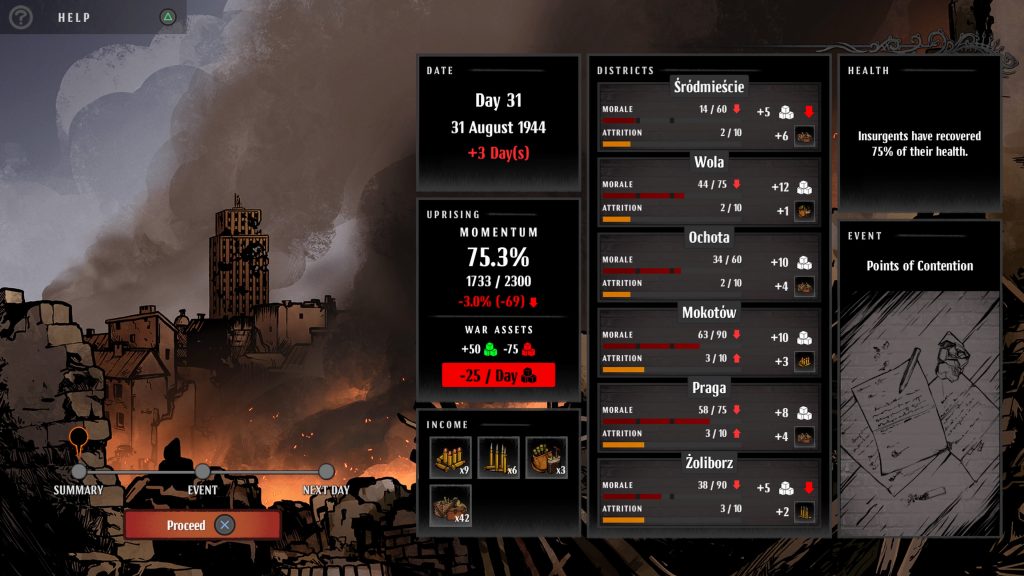 Ultimately fans of tactical battles who aren’t afraid of failure will get plenty of enjoyment out of Warsaw. The subject matter is unusual for gaming and it’s handled well and there’s reason to play it again and again. I do think there is an issue with pacing but really, beyond some minor issues with bringing the controls over from PC, I can’t really fault Warsaw. Assuming the save corruption was a freak occurrence. It’s reasonably priced too, so if anything I’ve written has piqued your interest then be sure to check it out.

Warsaw
8 Overall
Pros
+ Tense, tactical gameplay
+ Great presentation
+ Unusual subject matter, handled well
+ Replayability
Cons
- You're never really building to anything
- Some long load times
- Some awkward controls
- Corrupted my save once
Summary
Warsaw makes its way from PC to PS4 pretty much intact. The controls take a bit of getting used to and the load times are slightly too long but the challenging, tactical combat and uncommon setting translates without issue.