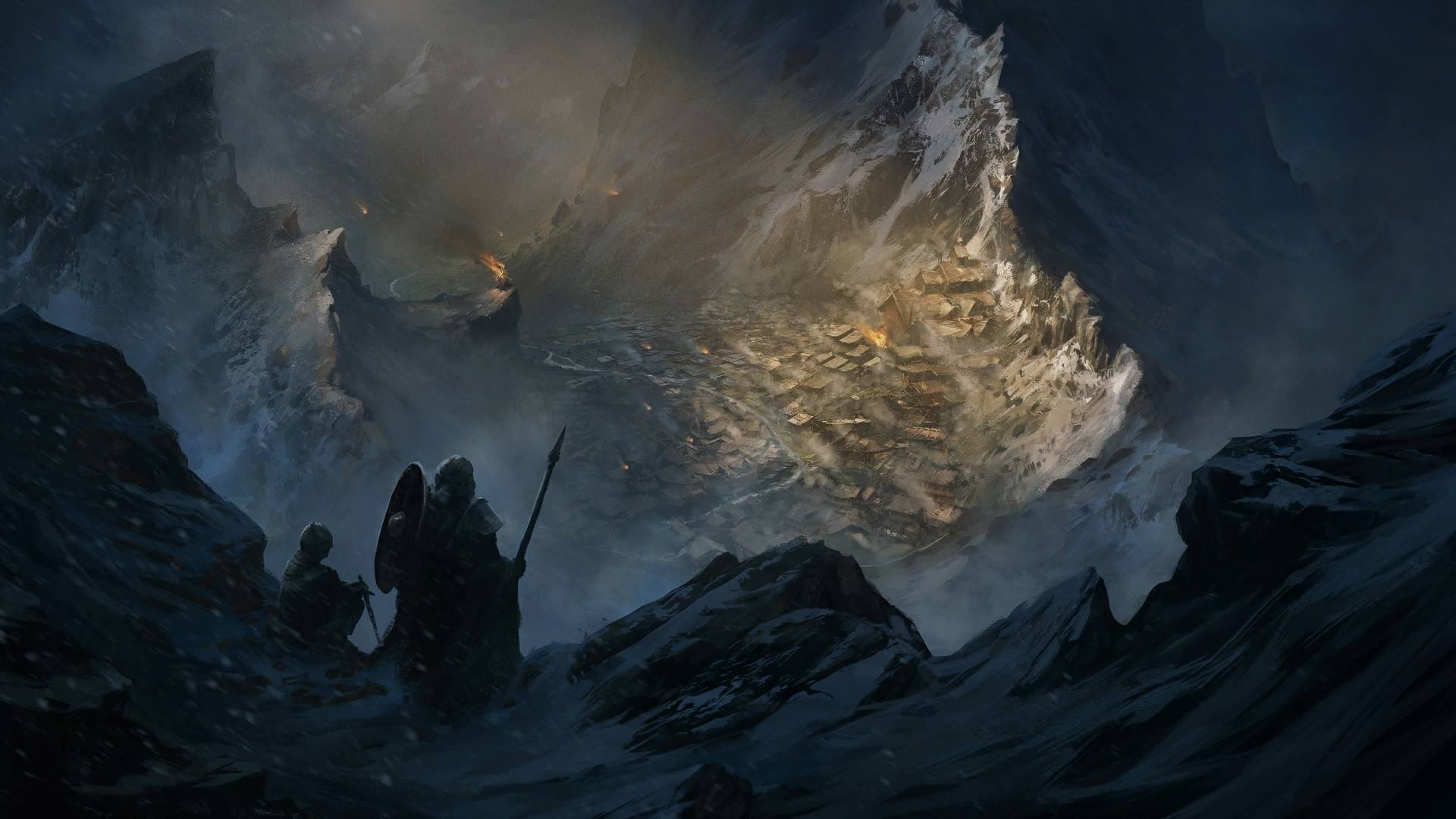 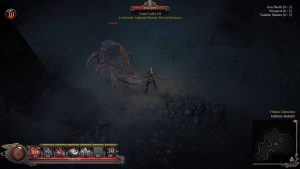 There is an almost insurmountable, theoretical mountain that greets any isometric action RPG developer currently. Said mountain is named ‘Diablo’. Blizzard managed to knock the world for six when the Diablo series debuted and it has maintained a stranglehold on the genre ever since then. Many have stepped up to challenge the summit, however most end up as grizzled monuments of failed attempts and broken dreams. Others however, get close enough to the peak that they get revered in their own right. Vikings: Wolves of Midgard by Games Farm is the latest to challenge the slope, but is it up to it?

Vikings: Wolves of Midgard shrugs away the demonic roots of the Diablo franchise and puts you in the boots of a Viking or Shieldmaiden as they take on the harsh tundra of Norse mythology. Everything starts standard enough with your character arriving near their village as it is being pillaged by local rivals, once you liberate the village back you are placed in charge of your Viking stronghold. You can then embark on missions to build up your village and to take the fight to other Viking strongholds to claim your dominance as leader of the Ulfung tribe. Missions vary little with most of them revolving around collecting a magical McGuffin to proceed the story and open a shop in the village and in true action RPG boils down to hitting things in the face with sharp objects.

The missions that you go on are set in the varying plateaus of Norse mythology. Ranging from the tundra of Nordic mountains to the eerie, troll infest Utgarde which is depicted as another dimension of sorts. Games Farm has gone a way to making each environment as dangerous as the enemies that jump in your way by adding environmental effects and status ailments. If you stay in the cold for too long, then your character will start to freeze to death, making you must seek bonfires as checkpoints so that your character can get feeling back in their toes. Spend too long in the poisonous air of Utgarde and you will start to take damage before you find an area with cleaner air. It’s a small touch but it adds the element of strategy to the proceedings, making each battle in an area of exposure that more tense and life threatening. I may have given only two examples above of areas however there are many more to find in the game and they all keep within the Norse roots, It certainly enjoys more of a colour palette than I initially expected. 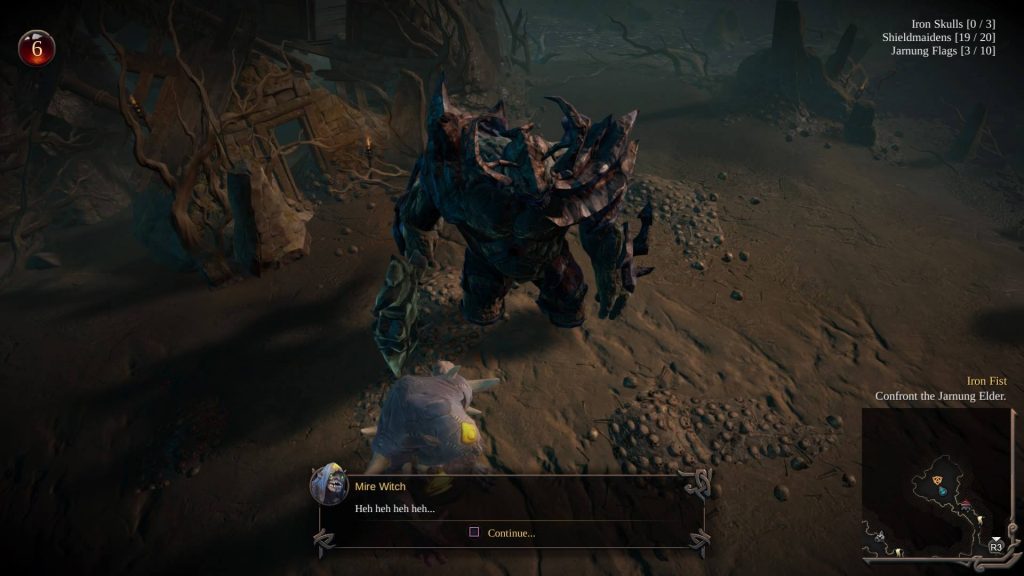 Story wise there isn’t much to say. While the cast of characters are well written, you can easily get by just by clicking through the dialogue. There are a couple of branching aspects to this as when you defeat some bosses you are given the opportunity to plunder a village fully for an immediate reward or you could make them join you so you get handouts over your next few missions. These don’t change much in the grand scheme of things, but it goes some way to tailor your experience some more.

While the mission structure is a bit on the formulaic side I found the method in which you build your character to be far more interesting. At the beginning of the game you are greeted by the usual character creator which lets you pick a gender and starting combat style. However, as you progress the combat style opens into a more customisable experience. For example, I started as a warrior Shieldmaiden with dual wielding as a combat style. As I earned experience (blood from enemies that you sacrifice to the Norse gods for levels) I could boost not only my dual wielding capability but also put points into two handed weapons, bows or tanking with sword and shield if I saw fit. This allowed for more avenues of change and let me pour any unneeded points from dual wield into a more useful long range stat that gave me more survivability. It also meant that any loot I picked up that didn’t fit my style had a purpose, meaning I could switch to a two-handed legendary weapon should I desire to without too much backtracking.

I also found the loot in general for Vikings to be far more meaningful than that of other action RPG’s, including Diablo in that number. While weapons and armour have their usual stat weights and bonuses to damage there are other items that don’t give as much of a black and white choice. Particularly in belts and relics, where the only benefit they give is a boost to a statistic, which again allows more freedom of choice. For example, in my first mission I was lucky to find a belt which dropped my ability cooldown time by around 5%, this let me used more powerful abilities quicker during boss battles. All the while not having to question my decision as there isn’t an arbitrary armour number attached. 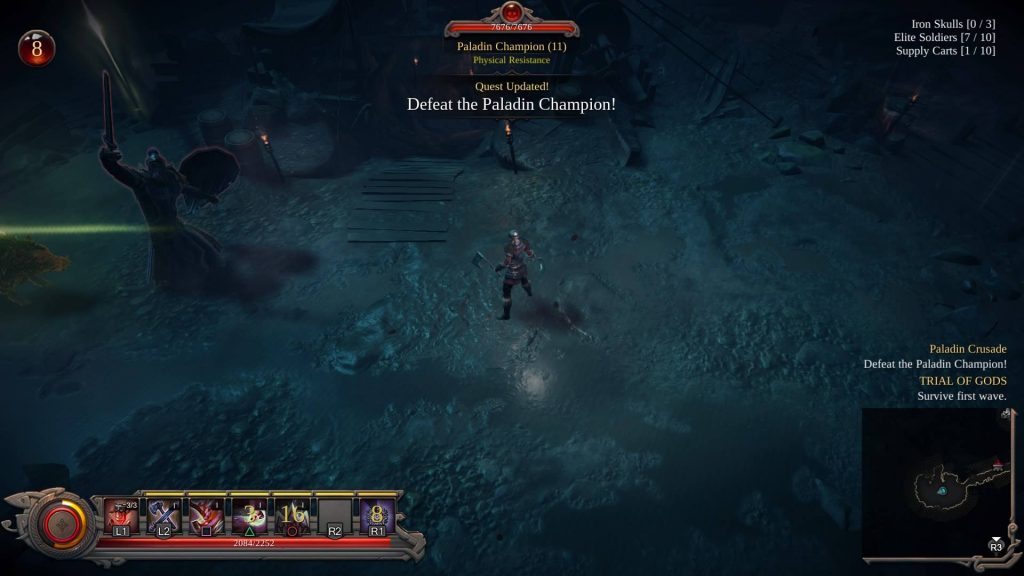 Of course, there are item qualities to consider, grey items can be found easily and aren’t particularly exciting, green is for uncommon items with one magical stat, blue is harder to find with two stats and Gold is legendary quality with three stats to enjoy. The cream of the crop are the purple items known as artifacts that are essentially weapons and armour from the gods themselves. These require a bit more luck and trickery to find as they come in components of three items that you need to craft together to make whole. These weapon pieces can be found on the bodies of secret bosses throughout the missions, which is an excellent way of making sure players just don’t zip through to the main objective.  I wasn’t too sure whether I was being lucky but after my playtime I had filled my inventory slots with a fair number of legendary items, making my time in the Norse wastes a somewhat easier one. I would put this down to not having to share though, as my time with Vikings was purely with the single player component.

One of the biggest things that made Diablo III on consoles great was the way in which Blizzard crafted the experience around the controller. It felt like a new and (dare I say) preferable means of control. It transformed what would have been a PC only genre into a viable console friendly experience with slick controls and movement. Vikings: Wolves of Midgard, I am glad to say has taken this on board with the controls also. Everything feels correct and designed to make your warrior or shield maiden as nippy as you like. Gleefully ripped from the Diablo control scheme is the ability to roll in any direction at the push of the right stick, while face buttons are dedicated to your spells and abilities. For added speed of use you can also switch between two different fighting styles that you can preload as you please, giving you two full arsenals of actions for you to switch to your liking. 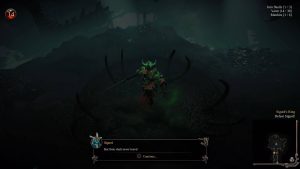 Controls are important for gameplay but of course there are other aspects to it and I feel that Vikings: Wolves of Midgard slightly misses out in terms of overall polish. There were a few times where my character would seem to teleport slightly due to frame skipping. other times I would destroy an enemy totem and the debris would shoot around the environment in a humorous style. While detrimental to the experience in some ways I wouldn’t exactly call these game breaking. Personally, I saw it more of an annoying side effect of what is otherwise a solid Action RPG. I would put the decision down to you, dear reader. If that sounds like a problem, then drop the score down a point.

Vikings: Wolves of Midgard
8 Overall
Pros
+ Satisfying combat with a challenge that ramps up with the player + Pared back gear gives the player more choices for building their characters + Norse mythology fits this game style to a tee.
Cons
- No local multiplayer - Doesn’t bring much innovation to the genre - Occasional frame rate bugs and physics glitches can get in the way.
Summary
Vikings: Wolves of Midgard is a very competent entry to action RPG genre with few caveats. Peppered among the well detailed Norse mythology inspired locales are occasional performance issues and a formulaic story. While notable, these do not detract from a fun and satisfying hack and slash experience. It must be hard to challenge a king of the genre like Diablo, but Vikings: Wolves of Midgard is a brilliant alternative to the Blizzard giant.

One thought on “Vikings: Wolves of Midgard – PS4 Review”