Vampyr, the latest effort by Parisian coders Don’t Nod (or DONTNOD depending on who is writing it) who are most celebrated for Life is Strange but are more fondly known by us at least for Remember Me, is an interesting game.  I know that’s an odd thing to lead with in a review but think about it.  How many games these days are actually interesting?  They can be dynamic, spectacular, exciting, fun, addictive and all manner of positive things but this game is above all things interesting.

The game itself is a third-person action RPG but one where you play as a vampire, Dr. Jonathon Reid,  who wakes up confused having just been turned after returning to London following World War 1.  As you stagger around, clueless as to what has happened and what you are, you are found by your sister.  Unfortunately for her your thirst is all you can think about and you feed on her, setting off the game’s plot.  A plot that sees Dr. Reid wrestle between his thirst and the oath he took as a doctor.  He wants to understand the condition and help protect the local community but he has to feed and also grow stronger in order to take on the numerous threats to him and the people in this game’s version of 1918 London. 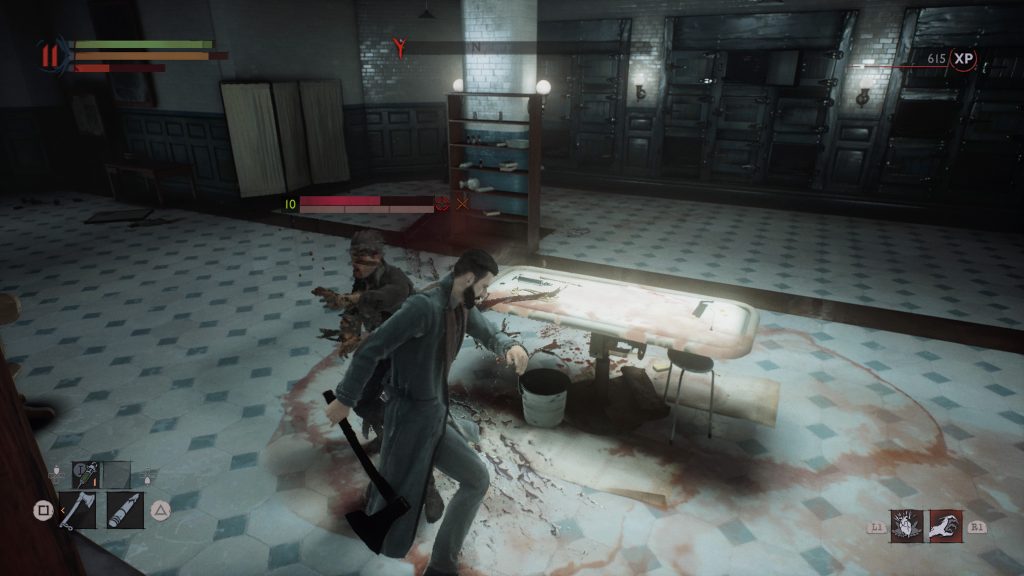 Before long you’ll be set up in Pembroke Hospital where your boss, Dr. Edgar Swansea, has you employed following your stint serving in France during the war.  He knows what you are and he has ambitions of working with you to study the vampire virus due to your pre-death career as a blood transfusion expert.  From this point on your are free to explore the hospital and meet the employees and patients there.  Every person has a story and may need your help.

This is where the interesting part comes in.  Unlike games that give you fleeting illusions of moral choice, this game goes deep with it.   As you learn about each character you can choose to help them, both in terms of their story or their medical condition, or compel them to go over to a dark corner somewhere so that you can feed on them.  Helping them also improves the quality of their blood which gives you more XP when you kill them and, as the game likes to tell you, XP is everything in Vampyr. 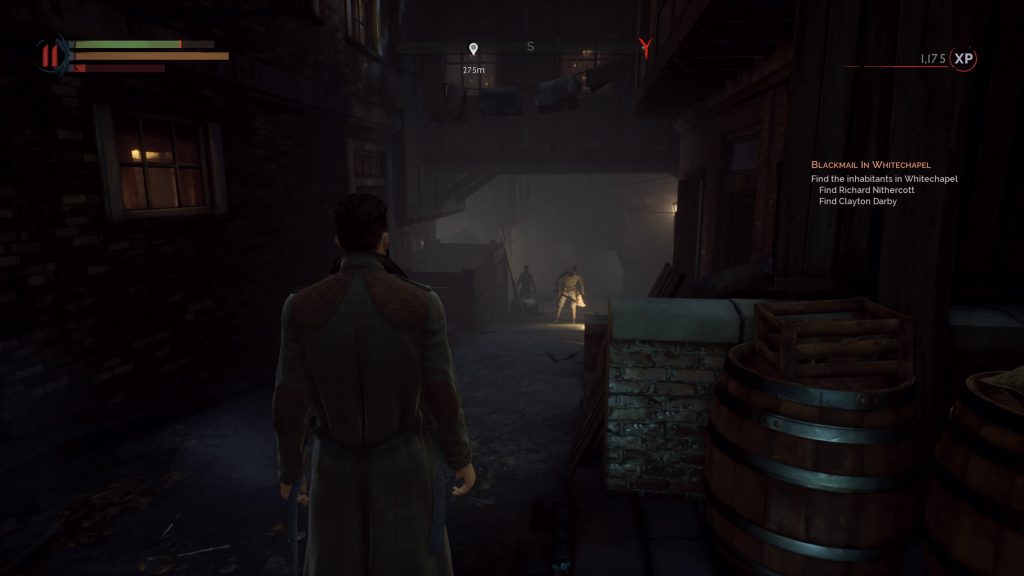 The combat is difficult, especially early on where enemies seemed to be able to trap you in combos that hit hard but, in keeping with the game’s overall theme, it is all pretty interesting again.  You’ve got three main stats to worry about in battle.  Your health, your stamina (which drains when you attack, dodge or run) and your blood level.  Blood is used to trigger special abilities and attacks and it can be used to restore health points.  Each fight you get into requires you to manage these three levels so that you don’t become helpless but your enemies, human or otherwise, are fierce and can easily get the upper hand.

Due to Vampyr‘s RPG mechanics there’s a lot to learn initially.  There are systems for upgrading and crafting and at first it is hard to know where to begin.  The XP that you earn from combat and quests allows you to skill up in various areas but again, there’s a lot of choice involved.  If you were practically paralysed by options in System Shock like I was, then you’ll struggle here.  But ultimately I ended up taking one of the first couple of weapons I found and focused on upgrading that and for Dr. Reid himself, I went with those abilities that most directly helped in combat.  Thanks mainly to an early boss encounter that caused a lot of problems. 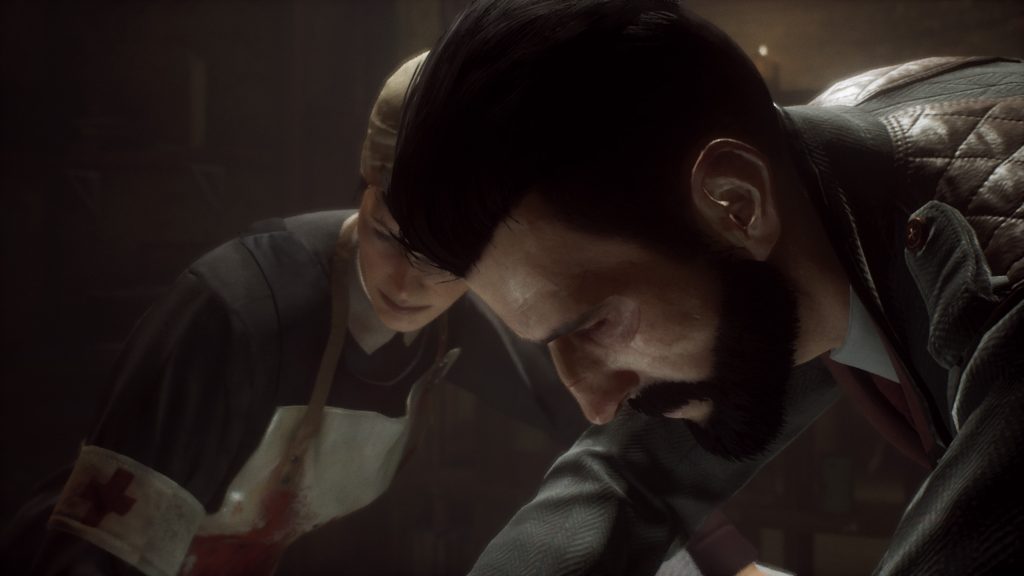 Another great wrinkle to the game’s structure is that while feeding on citizens is the easiest way to make XP, there are massive consequences to doing that.  Anybody that you meet can, in theory, be compelled to follow you and become your next meal which is fine but you kill them at your peril.  Choose badly and quest lines will become unavailable to you.  Also, the district that character is found in will become more and more destabilised every time you feed there before eventually falling into anarchy which leads to the streets being flooded with powerful enemies.

The problem with all of this is that dreaded feeling of missing out.  If you’re a completionist when it comes to RPGs then you’ll be in constant fear that the choices you are making are the wrong ones.  Something as simple as a dialogue choice can block off further choices later on if you pick wrongly and while the game loves to give you tons of information all the time, it doesn’t give you the heads up about correct conversation choices until much later into the game. 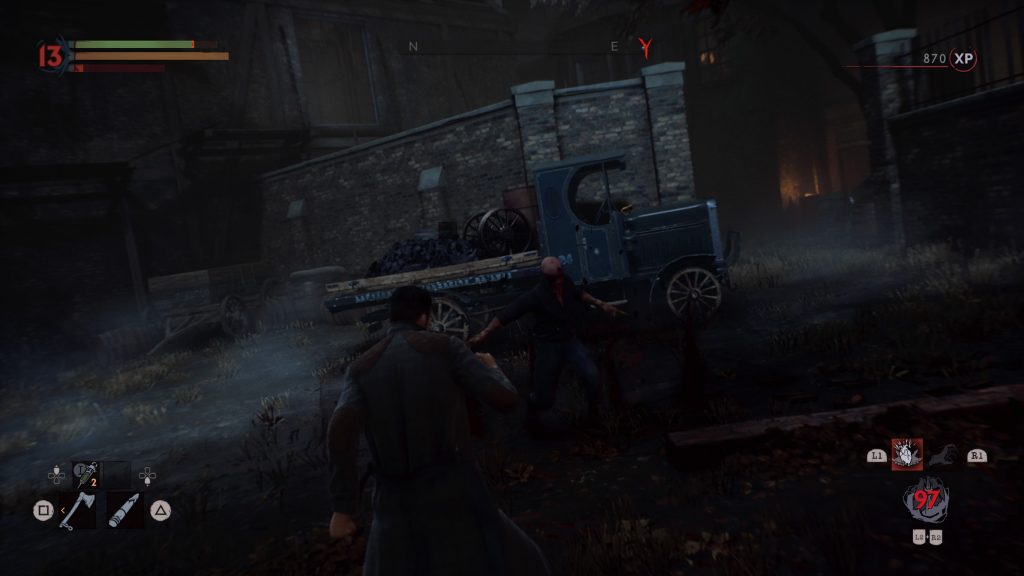 Conversations are a constant thing in Vampyr.  There are so many people to talk to, with so many choices.  After a while I started to get frustrated with it all, occasionally stabbing at the

button to shove things along a little but I did fight that impulse when I could because the writing here is pretty good and it’s so nice to have an RPG that isn’t set in a bunch of fields and mountains.   And you know what, that counts for a lot.  Every other RPG is basically Elder Scrolls but this is so different that we can’t help but like it.

That said, Vampyr was never going to be a true ‘triple-A’ title (best said in a Jim Sterling voice) and it does have a certain rough charm to it.  It doesn’t live up to modern 4K standards and compared to something like Far Cry 5 or even The Order, the facial models and animation are pretty shoddy and that’s a real issue for a modern full-retail game but Vampyr gets away with it by not feeling like a console game at all.  This feels like a cult PC game, even down to having a cursor-operated main menu.  It doesn’t go in for the flashy histrionics and endless flowing combos that you’d expect from any modern game that features melee combat but this helps the game to feel more grounded than its peers. 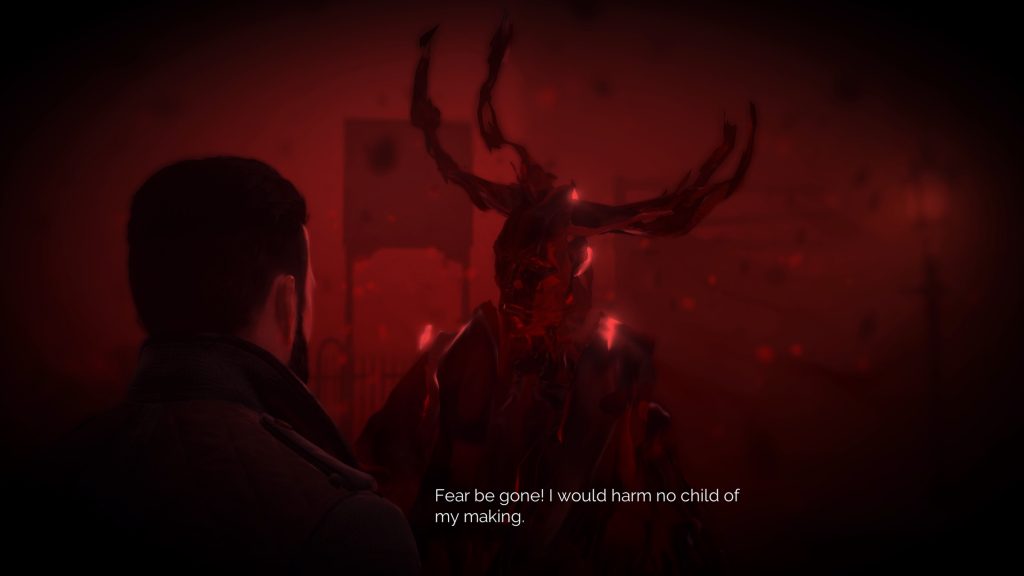 The gloomy, depressing version of London that this game offers is a perfect setting for the gameplay to exist in.  Gritty, miserable and frightening and just the place for a vampire to go about his business and it’s refreshingly small.  I don’t know about you but when games like Fallout 76 are proudly claiming to be four times bigger than Fallout 4, that sounds like a lot of empty space and hours wasted just travelling.  The game world here is compact but it doesn’t hurt it one bit.

The music also evokes this same sombre atmosphere as the visuals while the voice acting, as plummy as it is, reminds us of Blood Omen: Legacy of Kain which, for us at least, gives the game even more charm.

So while Vampyr isn’t the blockbusting technical marvel that you may be used to getting since the likes of Horizon and God of War, it is one of those games where the appeal is all in how different it is (fans of Vampire: The Masquerade may disagree).  It isn’t trying to push the hardware or take graphics to some new level.  The game engine here has one job and that’s to deliver the adventure to you, warts and all.  If you want something breathtaking or even just more slickly put together, options are out there.  But if you want to take part in an adventure that doesn’t feel like another post-Skyrim also-ran, then this is the game for you.

Vampyr
8 Overall
Pros
+ Genuinely different
+ Strong story elements
+ Combat is difficult but satisfying
+ Lots of upgrading options
+ Nice compact game world
Cons
- Far too easy to make bad choices
- Not particularly easy to get into
- Difficulty can spike a bit
- District health feels like a lot of responsibility
- Lacks a little extra polish
Summary
Vampyr is the most unique RPG we've played in years. It may not be the slickest or most beautiful but it has a charm that makes the game much more than the some of its parts.