Two Hundred Ways from Sunlight Games is the imaginatively named sequel to the XBox and PC only One Hundred Ways. That game had a hundred levels, so have a guess how many levels are in the sequel! This is something of a belated release on PS4, coming some months after the Xbox and Switch.

At its core, the game engine is clearly aimed at mouse control with the PS4 joypad being particularly ill-suited to the controls here. Graphically we can’t help but feel like Two Hundred Ways would’ve been a shareware release in days of yore, with say the first twenty-five levels available to people for free. Or a native Windows game that had a small window like that Space Cadet Pinball game that came as part of the Windows 95 Plus package. 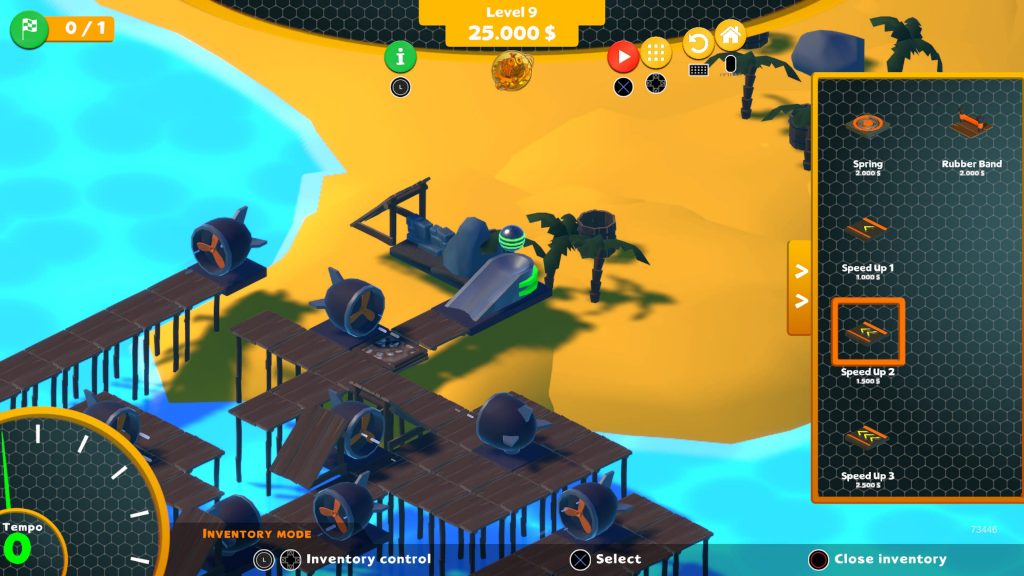 This is very much a PC game shunted on to consoles then and it feels ill-suited to the platform to us. For a start, the pace is glacial. To the extent that we actually found ourselves falling asleep as we played. Massively engaging, nope. We can see this working better on Switch as it lends itself to short sporadic gameplay sessions, certainly not staring at a big telly and wrangling a controller d-pad. If you want something worth of your time, games like 토토사이트 are a good alternative.

The core gameplay loop is to get a ball from a start ramp to the finish flag on each level using a variety of gadgets. We’re minded of an ancient Sierra PC game series The Incredible Machine, only this is a forced isometric view rather than the two dimensional puzzler renowned for destroying productivity thirty years ago. They start out prosaic enough to begin with, but  soon ramp up the difficulty. The less gadgets used, the better your score. 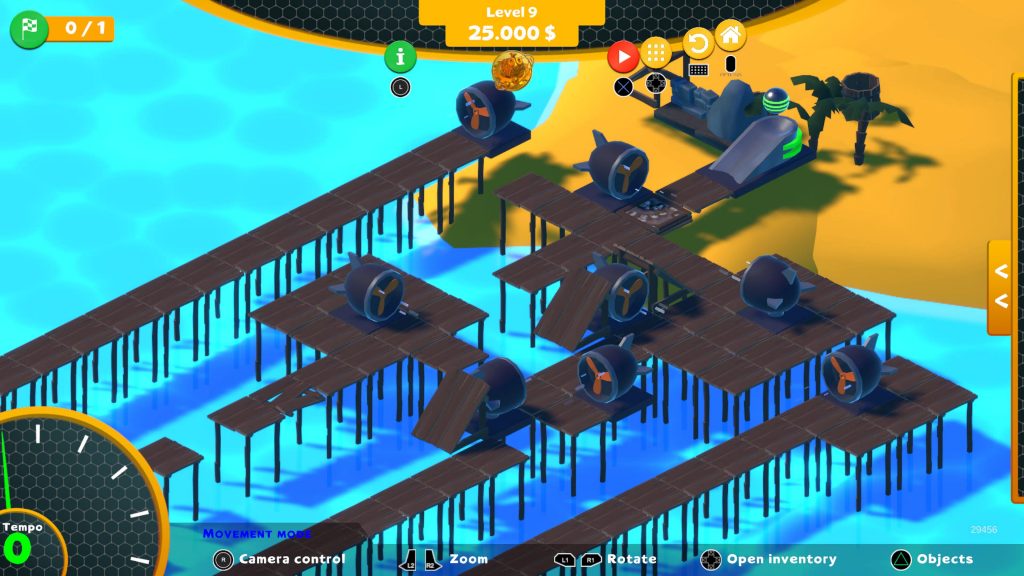 It becomes easy to overthink some levels, not helped by the fiddly controls. After a while you’ll get into a sort of groove, that’s assuming if you don’t end up bored rigid doing so. The first level of each set introduces a mechanic and you’re very much left to get on with it. Good luck getting a gold medal on latter levels as you progress anyway.

This leads to an iterative process where you’ll inch your way through a level, gadget by gadget, very rarely nailing a level with ease. Not to mention the constraints for gold medals too. Not so much trial and error, as more deliberate error after deliberate error until you muddle through. You can unlock level packs early if you win enough medals in prior packs, we guess you could pick and choose as you go. At least there’s some sense of progression and not the everything unlocked at the outset nonsense like Mario Kart 8 Deluxe on Switch. 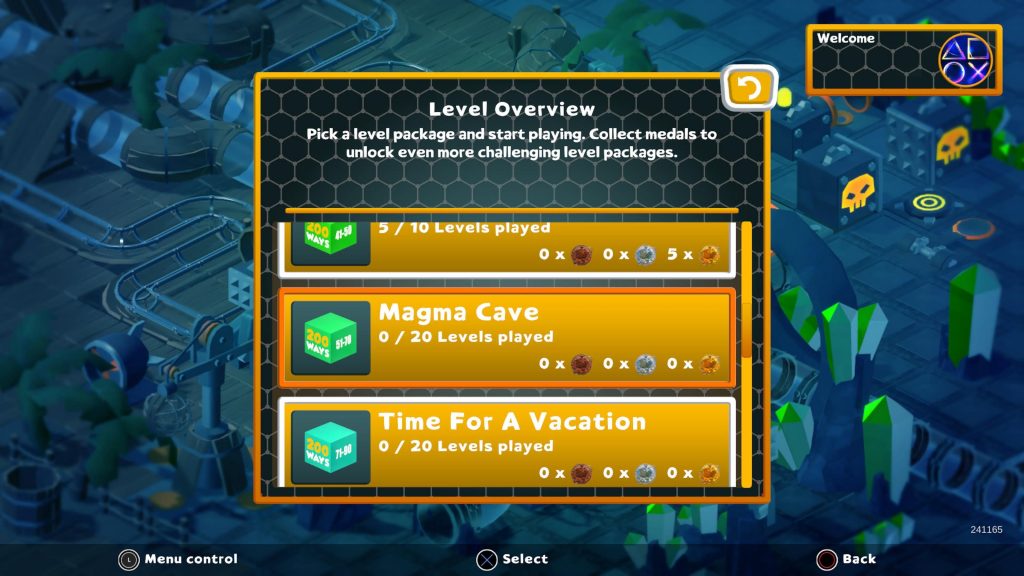 We’d not normally mention them in this level of depth, but the trophies for Two Hundred Ways are an afterthought at best, so you’re not offsetting the somnambulistic nature of the gameplay with a momentary dopamine rush as a trophy unlocks. There’s seven trophies total. Yup. Not even a lazy assigning of a trophy for each block of puzzles. Oh no, that’d be too easy. Bafflingly there’s a trophy for finishing the tutorial levels, but it’s not actually clear which levels are tutorials. So not a game for those looking for an efficient trophy haul then. We expect the first trophy to fall for many will be completing the first fifty levels. Yes, you’re honestly going to have to complete a quarter of the entire game for a single bloody trophy. 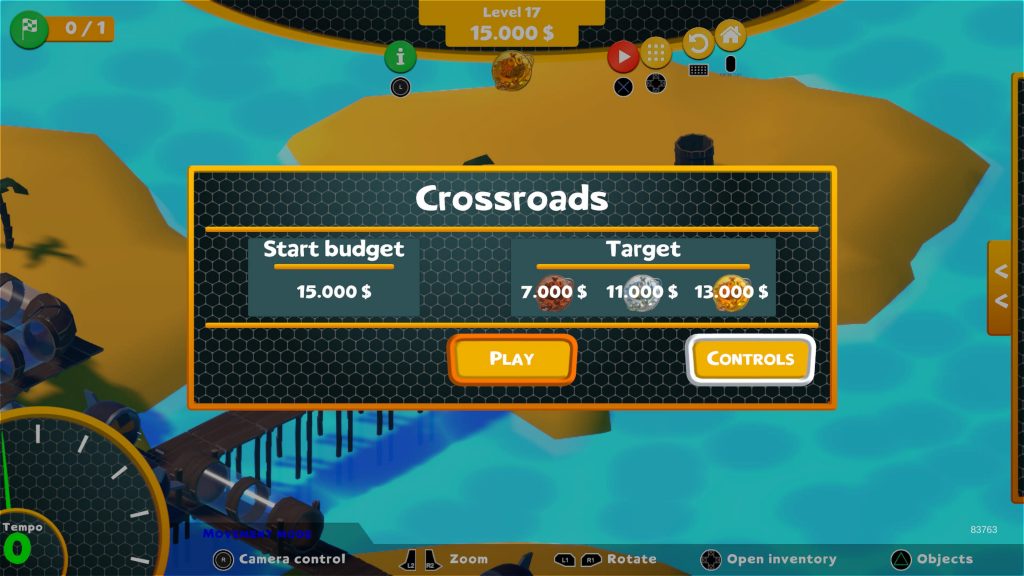 Not to mention the trophy for getting gold on every single level. You don’t even get a fucking platinum for what is sure to be a massive timesink, even if you resort to a guide. Trophies should be secondary to the game itself, but not a perfunctory afterthought as they are here. In contrast, there are thirty seven achievements on the Xbox version. And guess what, they follow the suggested structure we mentions in the previous paragraph. So we’re not sure what happened with the PS4 trophies then.

The generic looking graphics, ill-suited controls and slow pace of gameplay aren’t what people will be looking for on PS4. Your mum might like it on her laptop but we struggled from the outset with Two Hundred Ways. The pace is just too pedestrian and it didn’t grip us otherwise. We didn’t turn on our PS5 eager to play this, put it that way. Games should be a fun diversion, not a long and drawn out chore.  Now if you’ll excuse us, we’ve dishes to do instead. Two Hundred Ways is a long and drawn out PC port with controls that are ill-suited to consoles. We’ve never wished for mouse control more on a console game than we have with this.

Cons
- Graphically unsophisticated at best, generic at worst
- Glacial gameplay pace and ill-suited controls
- Seven trophies compared to thirty seven achievements on Xbox
Summary
Two Hundred Ways is the sequel to One Hundred Ways. It's a port of a PC puzzle game that needn't be on consoles at all. Slow paced gameplay and badly mapped controls make us wish for a PS5 compatible mouse for this game alone. Also a mere seven trophies compared to thirty seven on Xbox makes us wonder why we got the shitty stick on PS4. Not quite Wii-level shovelware, but it feels that way.