From three-man Kiwi developer Rainbite (of Vita/PS4 adventure Reverie)  and prolific shoot-em-up publisher Eastasiasoft comes Trigger Witch. This reviewer was a little twitchy to start with as the title had us recalling the frankly risible 360-era third person action game Bullet Witch.

Thankfully for our sanity and those with good taste, Trigger Witch shares nothing but a vaguely similar sounding name and witches with firearms. This might seem a bit baffling but it’s  fine set up for your journey around the land of Evertonia. No Scousers to be seen here though. More a Link To The Past styled dungeon crawler with all manner of automatic weapons. 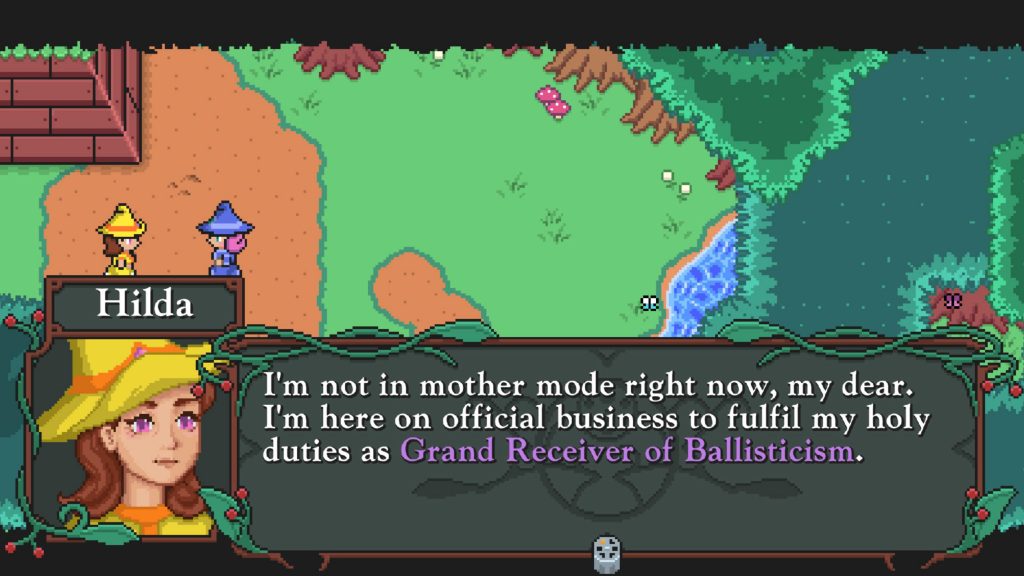 For reasons not entirely clear at the outset, your mother Hilda is the ‘Grand Receiver of Ballisticism’, a pseudo-religion for the coven of witches your character Collette is part of. They’ve eschewed conventional magic for the joy of guns instead.  It’s less jarring than the weird monkey shooter Tamarin that we previously reviewed at least. It helps that Trigger Witch is a good game too.

At the outset you can choose from one of several difficulty levels with your respective difficulty dictating the loot drop frequency, your weapon damage and general accuracy. We went with normal difficulty on this occasion which made for a fair challenge for the most part. 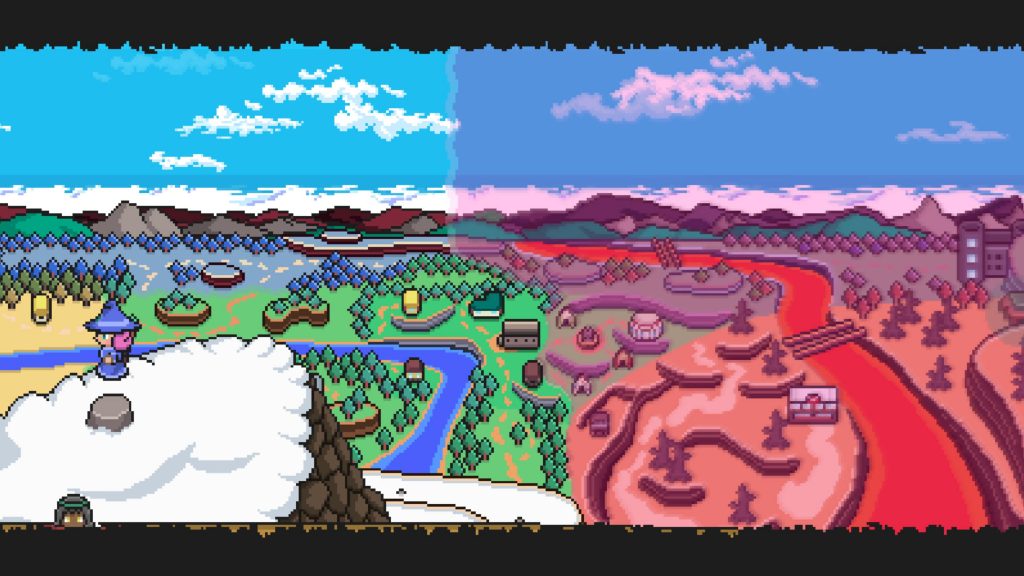 You’ll immediately be struck by how much your home environment looks like Kakariko Village, even down to the tranquil music that plays as you get oriented to the world of Ballisticism. After a trial of sorts that doubles up as a tutorial by stealth, you’re tasked with finding the necessary components to dissolve the barrier that divides the domain of the Ozryn Witches (your lot) and the Nuxvarr Goblins to the north.

As well as the graphical similarities, structurally we’re reminded of A Link To The Past once more, especially with regards the three preliminary dungeons leading to a catastrophic event. This is by no means a bad thing. It worked for Nintendo in 1992, just as it works for Rainbite almost thirty years later. 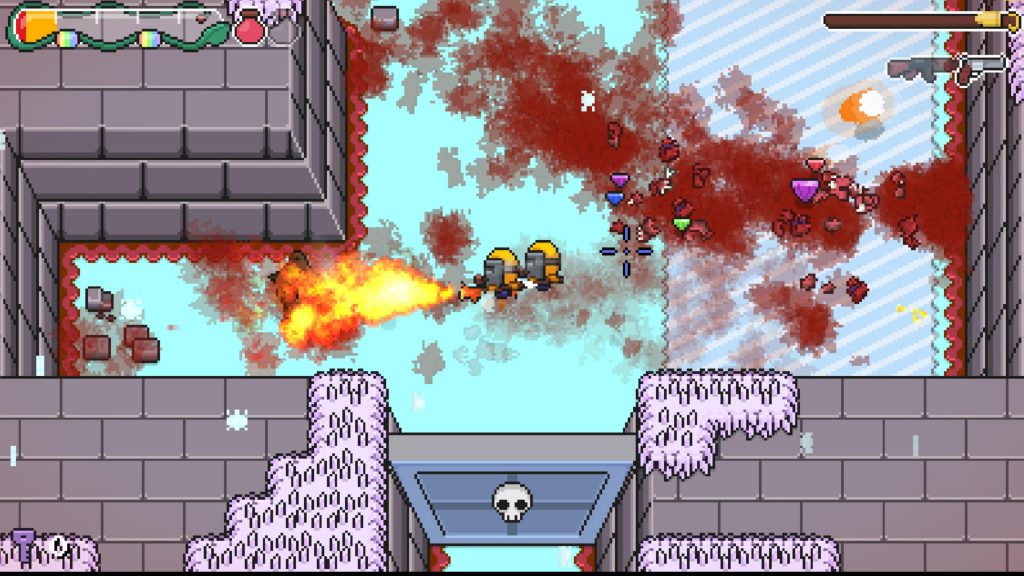 As you might expect from a game with such a focus on its weapons, combat is very much central to the experience here. Starting with the pew pew handcannon, each of the weapons has its own distinct identity. The clever thing is that while weapons have a finite clip size and you’ll eventually run out of ammunition, the game switches automatically to your sidearm so you’re never left in the lurch in the midst of a firefight.

Additionally, as you kill enemies, your health potion refills with the lifeforce of those you’ve slain. It’s a nice way to get an almost immediate reward for your slaughter of the otherwise innocent fauna of Evertonia, if not exactly assuaging your guilt. 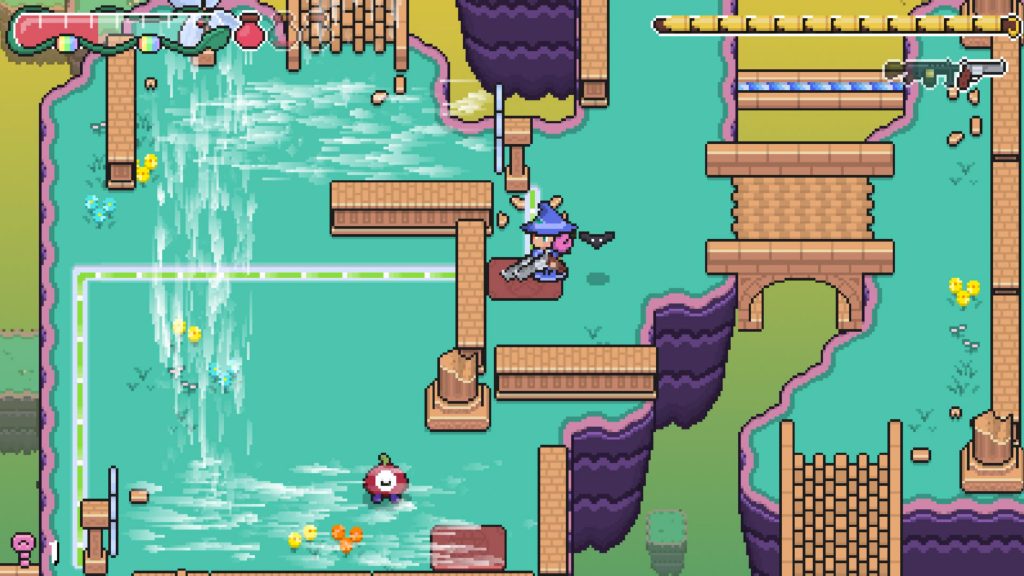 Thankfully the combat is great with each of the weapons having satisfying characteristics and excellent depiction of accuracy and recoil. Each has a trophy when you acquire it, as well as another for fulfilling particular kills with them. For example the twin Uzis require you to unload a full clip on enemies without missing, which might seem challenging to start with.

All we’ll say is be patient and you’ll get it organically. A nice touch is the overworld music changes from cute chiptunes to the same melody, only with guitar power chords when you engage enemies. It’s a lovely little detail. 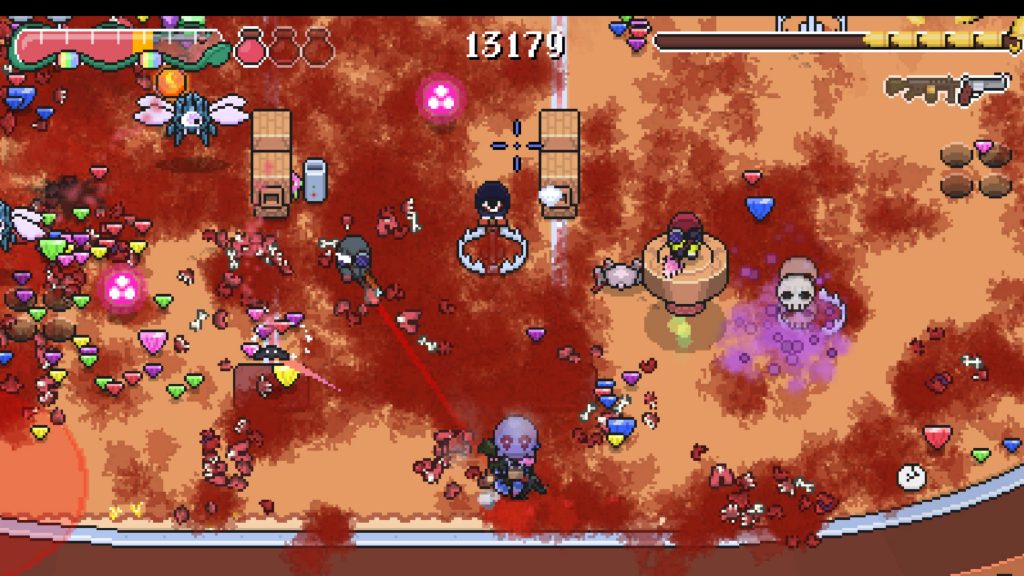 In default settings, each enemy you kill leaves a nice blood splatter. In the arena that you get to play once you’ve taken down the barrier, this is far more evident than it would be otherwise. Along with the gunplay, this makes for a game we felt uncomfortable playing with our kid around. Not quite Bloodroots-style blood smears, but not far off.  Hurrah then for piñata mode where blood is replaced by sweeties instead. You might think this might lessen the impact of the violence a little, but it still remains fairly overt, the guns being very much still visible.

If you wish you can also switch on a crosshair, cursor or aim assist. To be honest the shooting is great fun and you don’t really need the aids, but hey, knock yourself out. You’re not penalised for having them switched on at least. 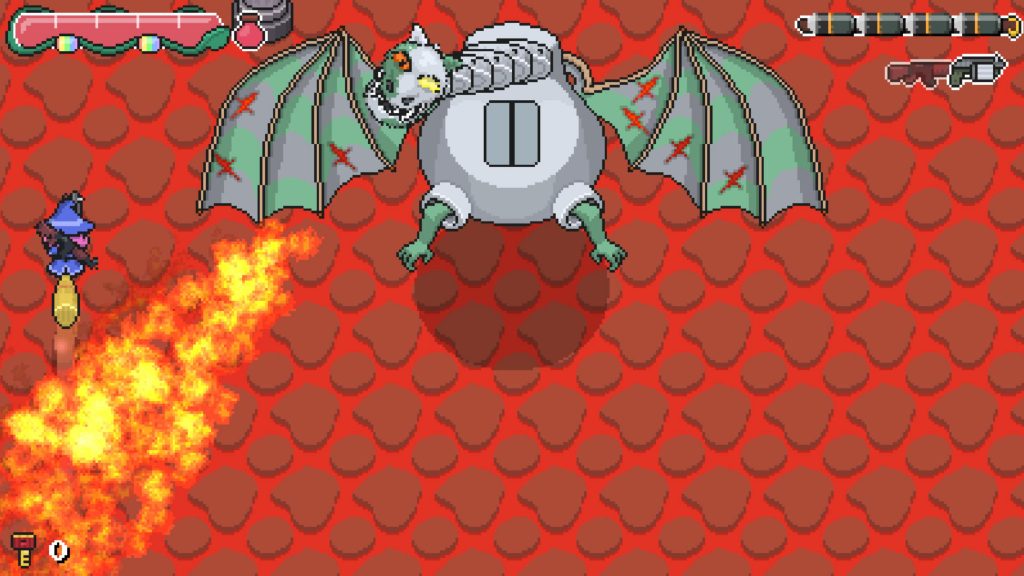 During your exploration, you’ll fight bosses in each of the dungeons. The first being a dragon who you’ll face in a vertically scrolling broomstick shoot-em-up format and you’ll be forgiven for thinking that Trigger Witch is a typical Eastasiasoft release in terms of the reverting to type. It turns out these sections are very much the exception rather than the rule.

Each dungeon yields a new weapon, though this weapon is by no means a requirement to beat the stage, barring the flamethrower that opens up the far reaches of the ice dungeon. Who knew, ice melts! You can also pick up weapon upgrade tokens that allow you to boost the stats of your weapons.

On normal difficulty at least, the problem we discovered is that a fully upgraded weapon becomes immensely powerful. Even the standard hand cannon becomes overpowered, particularly with regards rate of fire and clip size. Boss health bars aren’t visible, but they’ll succumb far quicker if you spend a bit of time upgrading the weapons. 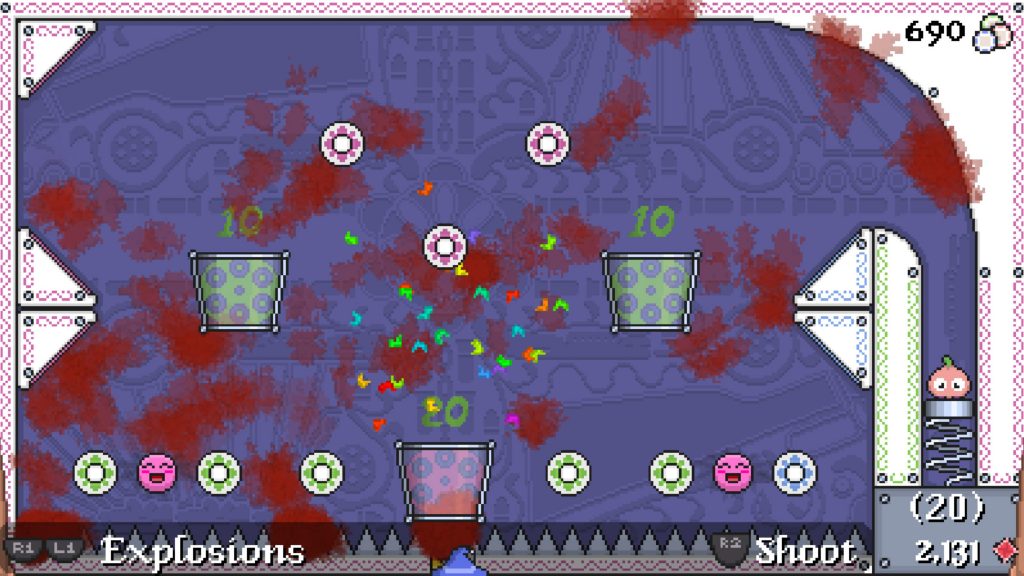 When we played Reverie on Vita we had a little trouble with some of the dungeons in terms of finding keys and progressing further. We worried for an awful moment that we’d had the same problem with Trigger Witch, but thankfully a little retreading had us moving on without too much bother. Each dungeon has a map to find, just as vendors have maps available to buy that aid finding secrets in the overworld.

Additionally, in the south-east of the map there’s a casino on the beach with a pachinko-styled minigame. When we first got there we didn’t have much cash to burn, but when we returned with deeper pockets we were able to get a weapon upgrade token as well as an additional health replenishment vial. Having this extra chance really helped in the subsequent dungeons, at least until we discovered the joys of an overpowered hand cannon. 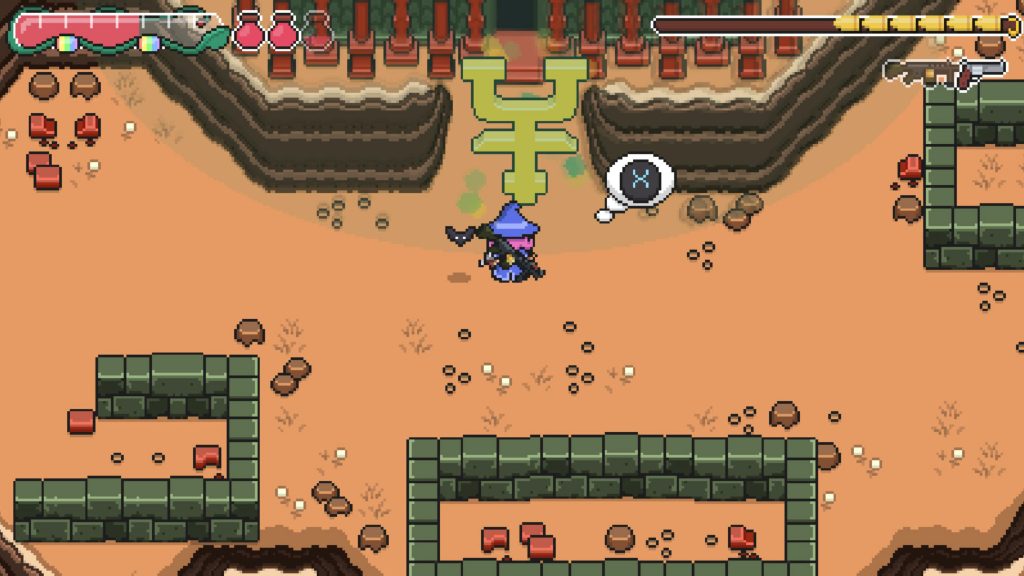 Eventually you’ll bring the magic barrier down with an aim to pursue the villain of the piece, of course he ups the ante with another dick move setting up a final confrontation. Of course you’ve more dungeons to vanquish first, though not after having been thrown in jail by the Nuxvarr sheriff for potentially jeopardising the peace of the land.

With its sprawling dungeons, excellent weapons and general mechanics, Trigger Witch is a whole lot of fun. The story, admittedly, is all sorts of rhubarb and the Ballisticism mythos is wilfully daft. Rainbite have done a stellar job here, putting bigger dev teams to shame in terms of the thought and general design here.

Cons
- Story is all kinds of nonsense
- Weapon upgrades can throw balance out a little
- Occasionally a bit hard to pathfind in dungeons
- Perhaps a bit too retro for some sensibilities
Summary
Trigger Witch is a great mechanically sound dungeon crawler with lots and lots of guns. It's really quite good, even if the story is all sorts of nonsense.