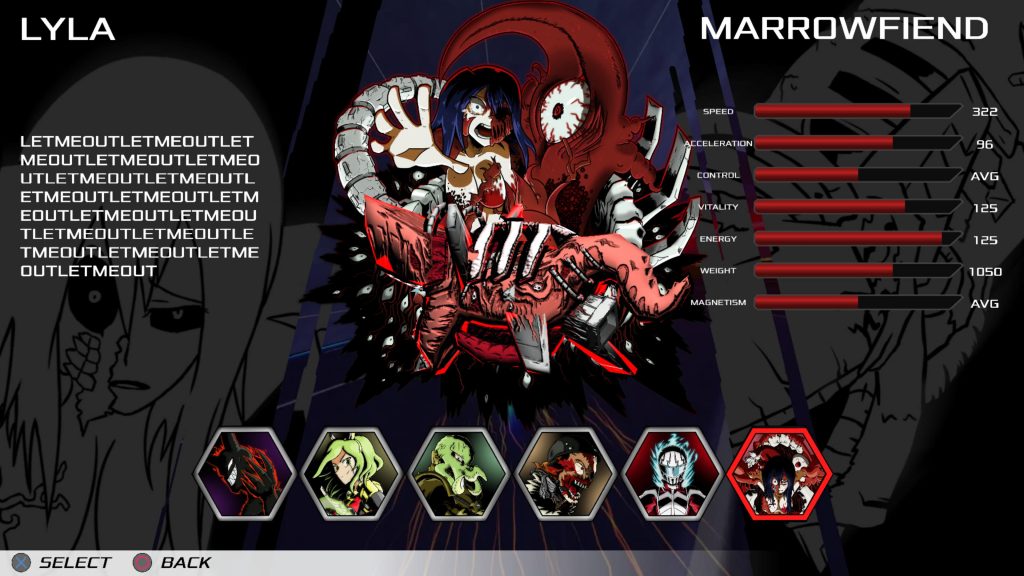 Despite the clear love that gamers have for the genre, the future for sci-fi racers with anti-grav ships is looking bleak. This is considering that we haven’t seen a new Wipeout entry since 2012 in the form of Wipeout 2048 on the Vita (excluding the Omega Collection) and F-Zero not even registering on Nintendo’s ‘can be bothered’ radar. Truly, if you want a dose of ludicrous speed on the winding cityscapes of the implausible future world then you must turn to the Indies for some of that good stuff.

We have had some glimmers of hope in this department, what with the likes of Rollcage’s spiritual successor coming in the form of Grip, the okay-ness of Antigraviator and the rerelease of Star Wars: Episode 1 Racer. Unfortunately, unless you really like this sort of thing and can look past the flaws in the previously mentioned games then they weren’t exactly being held on the same echelon as F-Zero or Wipeout, Unless of course you are on Switch and enjoying the delights of FAST Racing Neo. 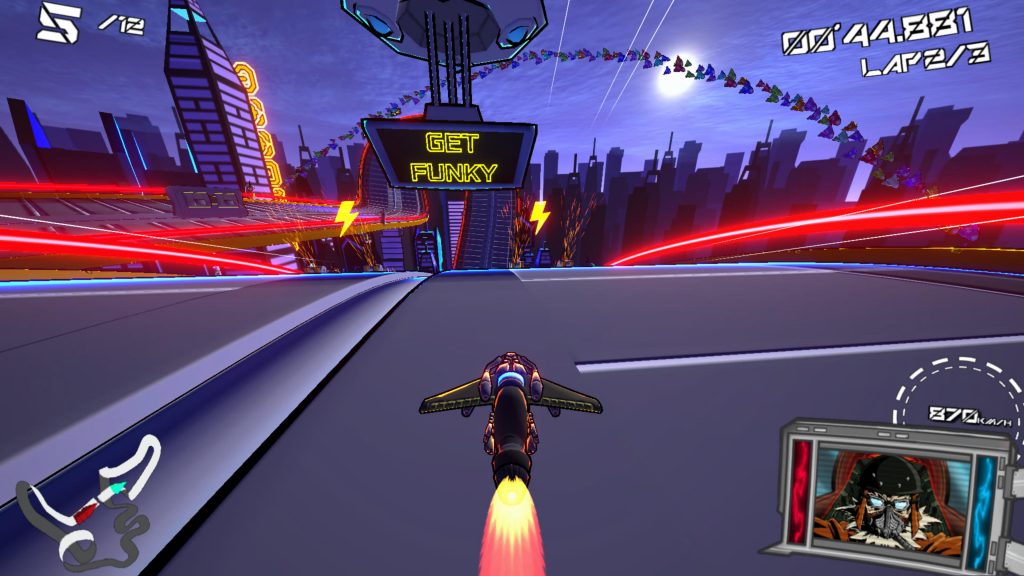 Despite these near misses and odd disappointments, the hope is always there that another title in the genre would emerge to fill that hole. This was exactly my thoughts when I first set my eyes on Ion Driver, a futuristic arcade style racer from Gammera Nest that promises a vicious and frenetic experience with an appealing cel-shaded visual style that depicts intergalactic racing around “all corners of space” against “twelve racers”. Well, that is what the PlayStation store description led me to believe.

Immediately, a sense of disappointment sets after starting Ion Driver up for the first time. The menu is barebones and with very little going on (Which will become a theme). Clicking into single player takes you immediately to the character select mode, which consists of six characters to pick from, each with their own edgy look and vehicle to race about in. You may have noticed the discrepancy here; the game description suggests that you would be racing against twelve racers? In this case, it is just these six characters, doubled up to create a full race roster. Ignoring this, the character designs are okay, even if they have a sketch book look to them, I particularly enjoyed the look of the manic aviator character that looks like it was lifted out of the Camp Chaos Iron Maiden video for Aces High.

Another thing to note where the description feels a bit naughty is the notion that you would be “racing around all corners of space”. The word “Corners” being the exaggerative part here. Ion Driver only has two tracks to race through, a number that I thought I was getting wrong while playing as I sincerely thought that there must be some more hiding within the game somewhere. However, despite how many times I finished first, doing so with each character I did not see any more unlock. Even when venturing into the Multi-Player mode to test, I realised that there were no additional locales to find within.

I don’t think there is any case in which a racing game in 2021 with only two tracks could be considered acceptable, Especially one that claims to be set across space, doubly so when there is a spinning globe animation on the track select which suggests there is a whole world to explore by way of death racing. Why, the only thing that could improve such a misstep would have to be nothing short of the most moreish and tightest racing gameplay going right?

You already know the answer this one. Ion Driver is far from a decent future racing darling. The controls are mostly fine, however the issue comes in the collision detection, which sees any accidental bump into the side lines either resulting in your ship careening off the side or coming to an immediate halt, no matter what speed it was travelling at that moment. Making things worse are the anti-gravity sections in the second track, which sees you jumping and twisting through tunnel sections that when entered, makes your ship glitch through the solid wall, and fall into the abyss. While leaving the tunnel sees the worst simulation of gravity I have ever seen in a game of this type.

While there are controls to mitigate the issues with self-righting and aimless flight, these are never explained in anything other than a controller splash screen on the main menu, which you are far from when playing the game. By the time you even realise the controls are there to make your life easier, you have already completed the entirety of Ion Driver’s offerings and have nothing left to go back for. Yes, while the collision is awful and the flight sections are a pain, the game does not represent much of a challenge after one or two goes at each course. The layouts are predictable and forgiving enough that they become easy to fumble through and the braindead AI racers all saunter through the course in a single file line, operating under no personality whatsoever.

In fact, the only semblance of character that I spotted during a race was a weird double of the vehicle I was using, which would disappear and reappear on my ship as I was racing around. This created a bit of a screen shake, as if I was constantly colliding with something, making it feel like I was driving something with an insane, mind of its own. If the gifs work then check them out and you will see what I mean.

Ion Driver offers so little that after ten minutes, you would have seen everything that the game has to offer. I am disappointed to state that while on the surface, the cel-shaded artstyle looks nice, everything under the hood is just vacant of any merit. This could have been so much more if it spent more time in the oven and had been fleshed out with more content. Instead, we are left with a husk, a proof of concept of what could have been a decent, if forgettable racer. It’s also a shame that the publishers have embellished the store description so much as well as currently, Ion Driver doesn’t even come close to fulfilling the promises that are made in this. 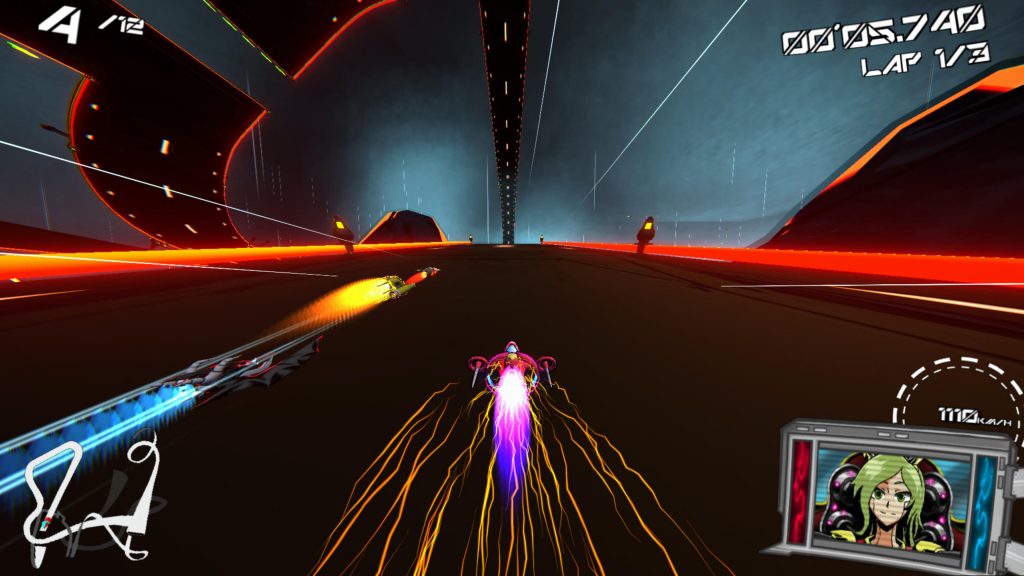 Ion Driver
1 Overall
Pros
+ The cartoonish cel-shaded visuals are functional and neat
Cons
- Barely functions, feels like it is in a proof-of-concept state
- Meagre content offering, with only two tracks and only one single player mode
- Consistent visual glitches
- Constant, buggy collision detection, especially with anti-grav sections
Summary
With only two tracks and a non-exaggerated game completion time of ten minutes, suggesting Ion Driver is a barebone experience would be an understatement. This initially attractive racer does nothing to further the futuristic racing genre, or do anything to make an impact beyond the nagging feeling of disappointment which permeates throughout. The experience is plagued by bugs, poor collision detection and far too many broken promises to count. Avoid.