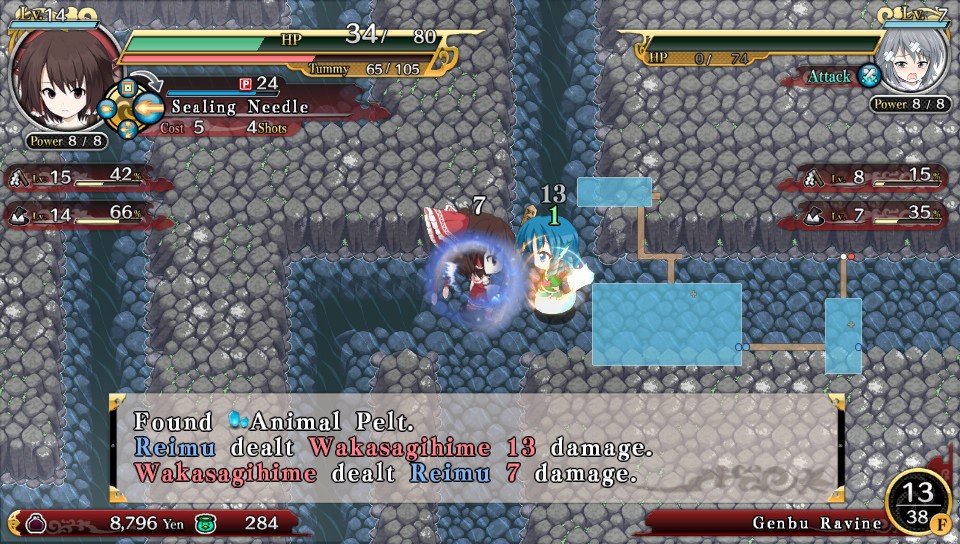 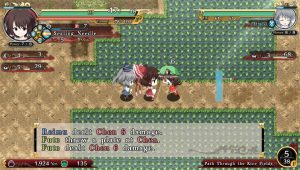 What we’ve got here is a Japanese indie roguelite.  As this is in the Touhou universe the same cast of anime characters are present as seen in the other Touhou games and this is resolutely Japanese through and through.  It is nice to see Japanese indie style games coming out over here and I’m sure it’s something we’ll see much more of in the future. 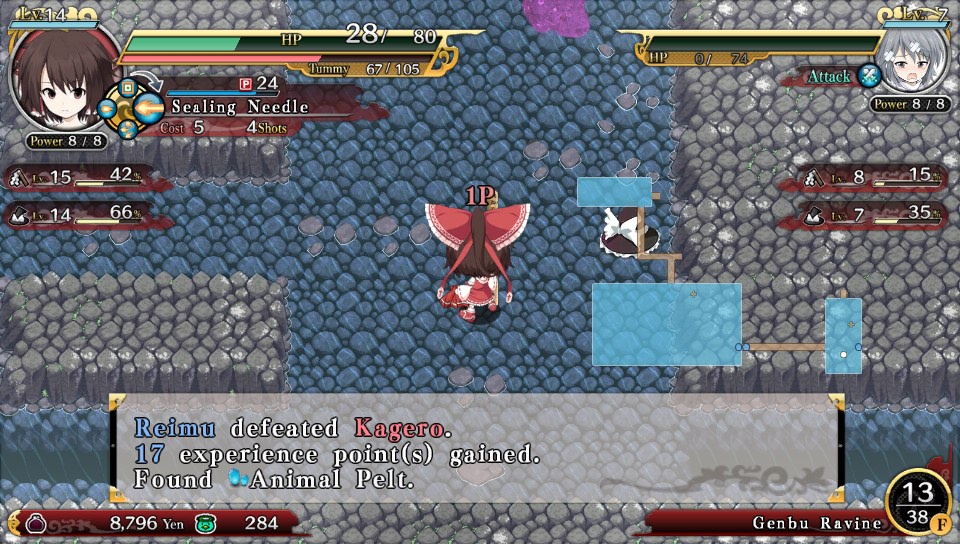 Touhou Genso Wanderer markets itself as a roguelite RPG, and that’s a pretty fair summation.  The game starts with a pretty mediocre and oddly long-winded cutscene which introduces the set up.  Your character is sat with a chap who owns a glowing orb, this orb flashes and turns him into a bad guy, you then get cast out to a local shrine in the ensuing battle.  The plot revolves around making your way from the shrine to the bad guy’s tower, going through randomly generated maps as you do.

The shrine you’ve been cast out to acts one of the hubs to the game.  There are other hubs every seven or so levels.  You shop at these and interact with any companions you have, although after each death you always return to the first one.  The graphics are fine in these specific hubs with some nice detailed sprite work. Unfortunately once you get in to the levels the backgrounds and scenery look a bit poor.  This may be due to the random nature of making a roguelite but the difference here is noticeable.

Each run through the game starts with your character at level one but certain other things do carry over between runs making this very much a roguelite.  The main way to make progress in the game then is to level up your weapons and armour.  As with your character these level up through use, but unlike your own level the weapon stats are permanent meaning that on subsequent runs you’ll get a head start on the action with stronger equipment.  As well as leveling up you can also fuse items together to give added stat boosts or buffs, this is a really intricate system which has a lot of depth to it, almost too much.  I say this because the fusing system isn’t intuitive and you’ll be spending a lot of time looking at menus and interpreting symbols to understand what stat is affected.

In the field the game plays as a turn based affair, but with no pause between the action, this makes it a free flowing game but does mean if you stand still nothing else will move. This allows for some tactical action and can make the exploration of the map as fast or as slow as you want which is nice.  From a stat point of view you have two metres to monitor, one is a tummy gauge which gradual reduces but will replenish the other gauge which is health.  What this means then is that you’ll need to keep your tummy full as you progress as this auto heals you.  It’s an interesting idea, but one which could have been achieved with just a self replenishing health meter instead.  These two meters once again showcase the game being complex for no apparent reason.

When it comes to the combat things initially seem very simple with only one button to attack.  As with the crafting though there are many aspects to the combat, with a range of spells, traps, bullets and support items to use.  Once again to get the most out of this you’ll be spending an awful lot of time in menus looking at symbols and understanding what the items do.  Combat can spike in difficulty too with silly things like invisible traps, enemies that de-equip your items or enemies shooting you from off screen.  These odd spikes just serve to frustrate the gameplay as often they are totally unexpected and feel like punishment.

I have other niggles with the game as well.  Although you have a partner you can never directly see their stats which makes eqiuping them with decent items a test of memory and math.  Each run can also take far too long considering this is a roguelite.  Whilst I’ve pointed out the difficulty can spike overall it is fairly easy to progress.  A single run can take 30 minutes easily which slows the overall cycle of the game down, i much prefer a quicker cycle for my roguelite experience.  The game also does an odd thing where the portal to the next level in the dungeon will often be in the same room you start in which sort of means you don’t actually have to explore that level at all, I’ve had this happen to me multiple times during multiple playthroughs.  I’ve already mentioned you’ll spend a lot of time in the menus  and these are universally cumbersome.  So for all the game does ok in some regards there is an awful lot which it does poorly. 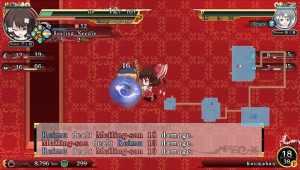 Coming back to my point about cost, if you like rogue type games you could get five or six different rogue style games for the cost of Touhou Genso Wanderer and have a wide mix of styles and quality, and that’s a big issue here.  If you love the Touhou universe though and are happy paying over the odds for a very average game this could be for you.

Touhou Genso Wanderer
4 Overall
Pros
+ Mechanically deep combat + Lots of levels + It plays an ok roguelite
Cons
- The current price of £45 is far too expensive - Map design is poor, even for a procedural game - The reliance on menu navigation, and the poor design of the menus frustrate the gameplay - Weak uninspired graphics
Summary
Touhou Genso Wanderer is a very Japanese and a very average indie roguelite. As this is in the Touhou universe the same cast of anime characters appear, and this may appeal to some people. However this does little to stand out from the crowd and is vastly over priced at launch.