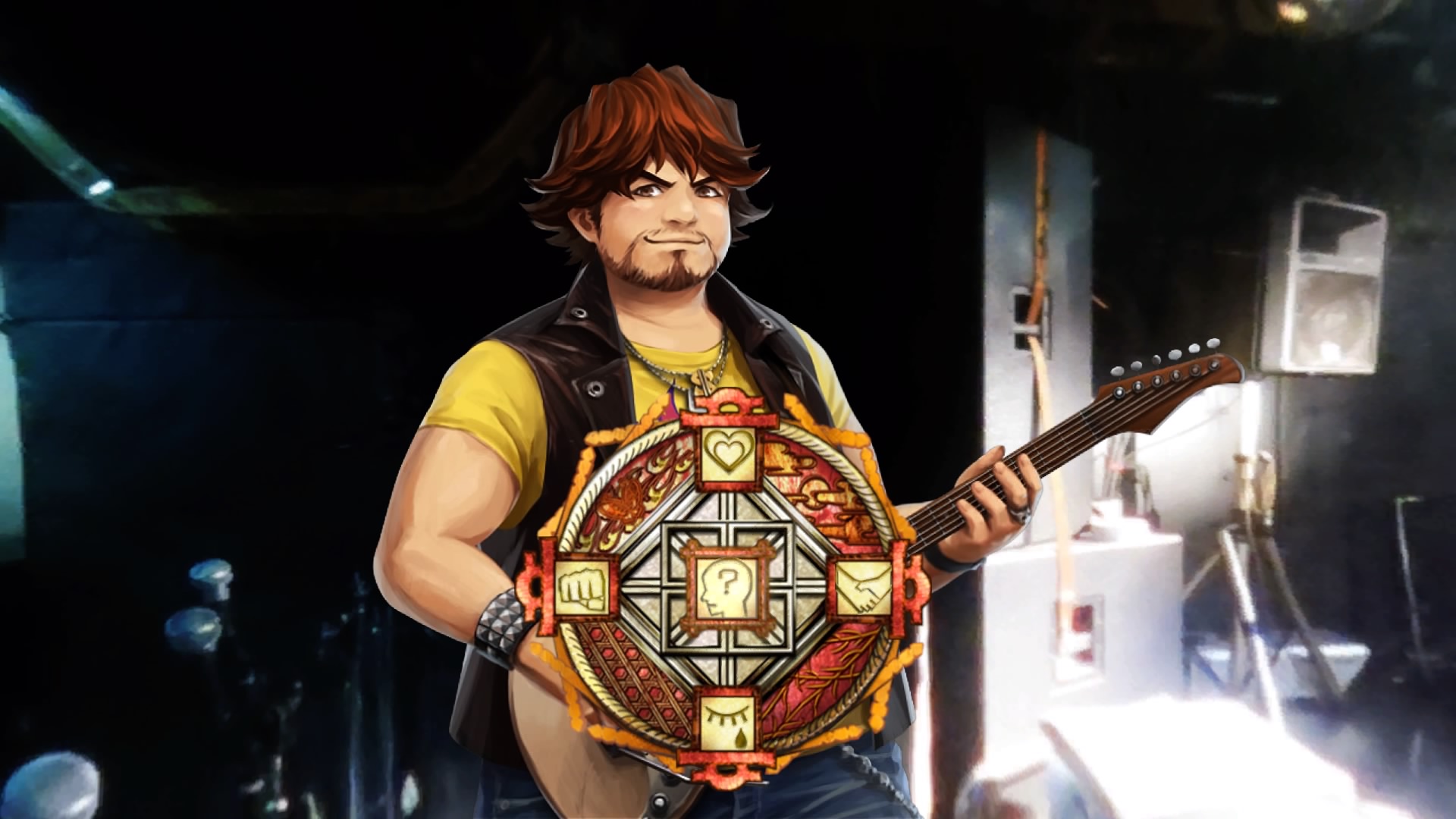 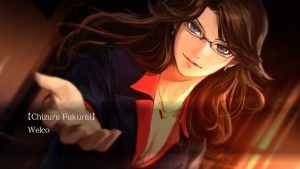 The latest release of Ghostbusters got a lot of flack for reimagining a classic franchise, I have no strong feelings about it either way but after playing Tokyo Twilight Ghost Hunters: Daybreak Special Gigs it just makes me wonder what a Japanese take on the franchise could have been.

Every now and again a game comes along which defies easy classification and Tokyo Twilight Ghost Hunters: Daybreak Special Gigs is such a game.  Initial released as Tokyo Twilight Ghost Hunters for the PlayStation 3 and VITA in 2014 this updated Daybreak Special Gigs edition see the game makes it’s debut on the PlayStation 4, as well as also being back on the VITA and PS3.

The narrative drive of the game sees you playing as a new student who quickly gets involved with a Japanese version of Ghostbusters, called Gate Keepers.  The Gate Keepers are a paranormal book publishers by day and exorcism for hire crew in the evenings.  People log on to their website and submit request for an exorcism which you can then choose to complete.  As a new recruit the story introduces you to everyone and follows your journey as you get to know your fellow employees. 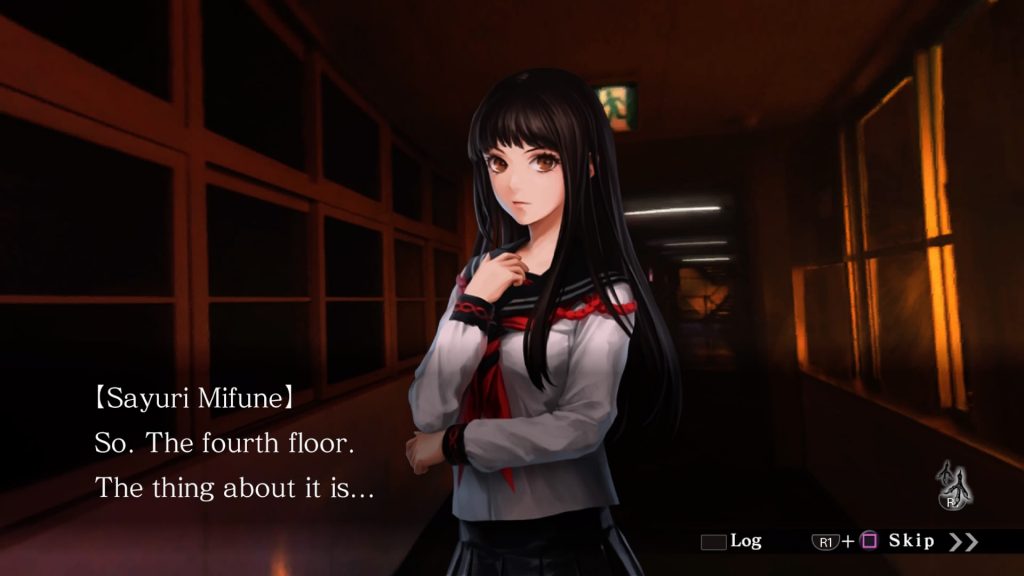 As with most visual novel type games there is a strong focus on relationships and how you either chose to strengthen or diminish these, with the game having multiple endings dependant on which relationship you focus in on.  The story being told here is pretty decent and feels at times like early episodes of Buffy the Vampire Slayer with a new monster each episode.  The narrative deftly mixes the day to day stories of the characters as well as themes around death and what it means to come back as a ghost.  Where this falls down though is when the game asks for you input into the conversations.  Rather than just offering you a choice of answers the game uses two abstract wheels with symbols representative of emotions or actions.  Given the vague nature of the available options it’s never clear what your characters response will actually be.  The game provides no explanation on how this system works, and in practice it just comes across as a bit confusing. 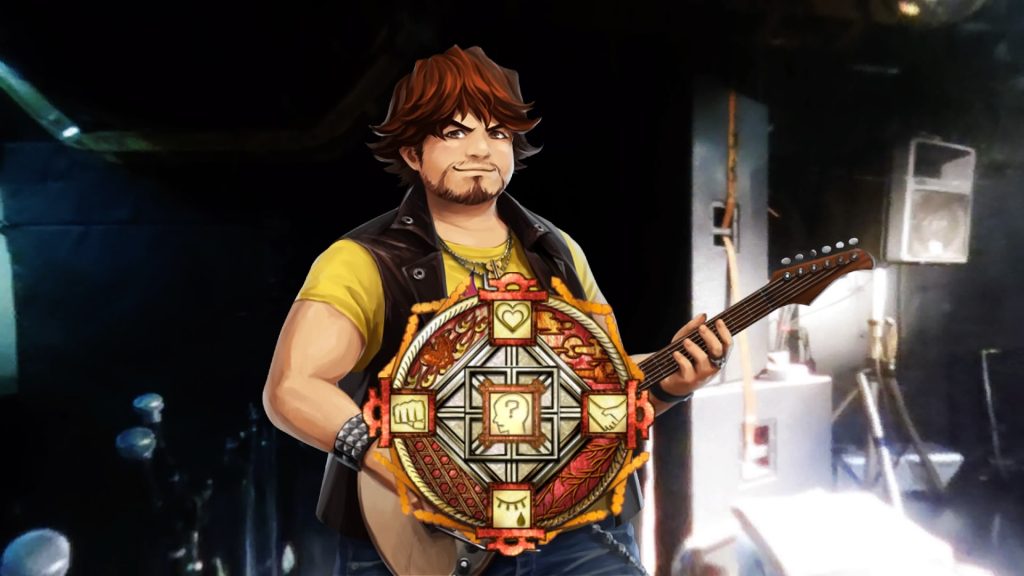 Tokyo Twilight Ghost Hunters: Daybreak Special Gigs has a great design aesthetic with gorgeous painted backgrounds and character designs, including some wonderfully bizarre ghosts.  Animation in the visual novel part of the game is limited to some vey minor movements, but these carry a brilliant fluidity and really pop on the big screen.  The game also has a nice quirky charm to it, with each mission being bookended by a full title roll including a theme tune and credits,  your save slots being  represented by a movie style poster of the exorcism you are on and even the names of the trophies being amusing.  This whole section of the game is pretty successful and very engaging.

What aren’t as successful are the exorcisms which are conducted as a turn based strategy game.    This initially involves a planning stage where you get to view the map you’ll be fighting in, these maps look like building plans and are laid out on a square grid.  You have the ability to buy traps and other items to place down in the map to help you when you get into the action.  Each trap costs money and you need to balance the fee for the job against how much you spend on traps.  Once this is completed the action begins. 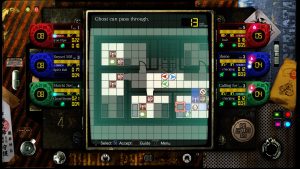 Played out on the same map you did your planning on you get to move your characters across the board with a pool of points which can be used for either movement, items or attacks.  Your characters are represented by coloured cursors and a USB stick attached to the side of the central screen which shows their attributes.  Visually this is tonally different from the rest of the game and I found it a challenge to recall which character was which and it sort of made me stop caring for them.

You plan all your moves and get your characters in position to attack the ghosts, who need to be defeated in order to be exorcised.  However as you move across the map so do the ghosts, and what this means is you are never moving your character to attack where the ghost is but rather where it is predicted to be.  I can’t begin to explain how frustrating this is as often you’ll see your perfectly lined-up shots go to waste as the ghost moves out of the way.  The game does offer some help here as the ghosts have a blue path around them which predicts their movement they are free to move wherever they wish within this range however.  In practice this means you need to try to cover their entire movement range rather than zero in on their actual placement.  Regardless of this helping hand you will still miss your target loads of times, the whole system is very frustrating.

As with an RPG after each battle you get to level up your character based on experience earned, putting points into a wide range of stats.  Before your next exorcism you also have the option to undertake optional side exorcisms, which play out exactly as explained above, or undergo specific character based training further levelling you up.  On top of this you also have the option to play the most byzantine board game I’ve ever seen, which should you be successful, will also give you further experience.  Thankfully this board game is totally optional and can be ignored. 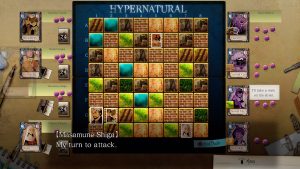 Overall then this is a mixed bag with a strong story and gorgeous art style.  It’s when the game varies out of the visual novel style that the problems appear.  The action sections are frustrating and the vague emotion wheel used in the dialogue parts isn’t wholly successful.  There is a brilliant idea hidden away here to balance a visual novel and action, however Tokyo Twilight Ghost Hunters: Daybreak Special Gigs is only partially successful.

Tokyo Twilight Ghost Hunters: Daybreak Special Gigs
6 Overall
Pros
+ Excellent art and design + A bold attempt to mix genres of visual novel and strategy
Cons
- The combat sections rely too heavily on luck and are frustrating - Oddly jarring design differences between the visual novel and the strategy sections - Emotion wheel used in dialogue is confusing
Summary
An interesting take on adding interaction to the visual novel genre which is only partially successful. Whilst the story is engaging and the art design is gorgeous, the RPG elements of the game just come across as frustrating. It is worth a look if you like visual novel games, but doesn't do enough to bring in a new crowd.