A PS4 and Vita review, that must mean it’s Ratalaika time! Thunder Paw is this week’s release and as usual it’s cross buy with both versions having their own, easily obtainable, platinum trophy. What genre is it this week? A quick look at the images in this review will tip you off but let’s get into the review. 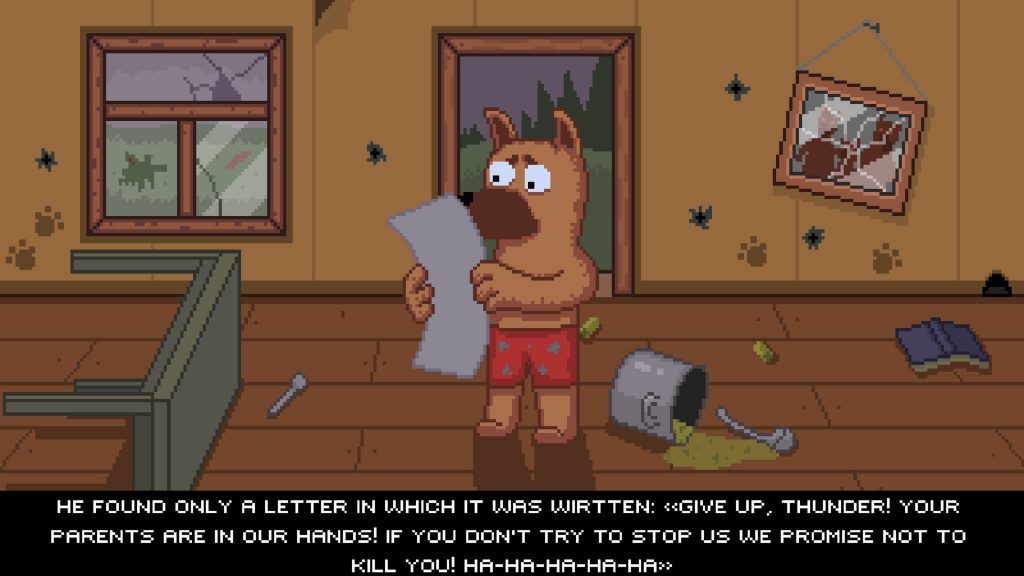 You play as the puppy Thunder. At the beginning of the game you get a few still frames of story. Thunder is out playing ball in a field when there’s a large explosion. He runs home to find his parents are kidnapped with a letter telling him to stay away, then the game starts. Thunder now has a gun and must kill every enemy in order to finish the level in this action platformer.

The action is 2D and viewed side on with each level acting as a semi-maze with enemies patrolling certain areas. Exploring the levels through jumping and the use of moving platforms you’ll need to kill each one before you can leave the level at the far right. The game keeps track of how many enemies you’ve killed and how many there are in total so it’s just up to you to be thorough.

The gun you start out with is pathetic however. The range is tiny and it takes a lot of shots to take down enemies. Luckily each time you kill an enemy they drop gems that will power up your weapon making it longer range, more powerful and all round far more useful. These gems tend to bounce around quite a bit which can make them tricky to collect however. Unluckily if you take a hit the weapon power goes down and if you die the gun’s power resets completely. There are a couple of other guns to be found around the levels but they follow the same rules. 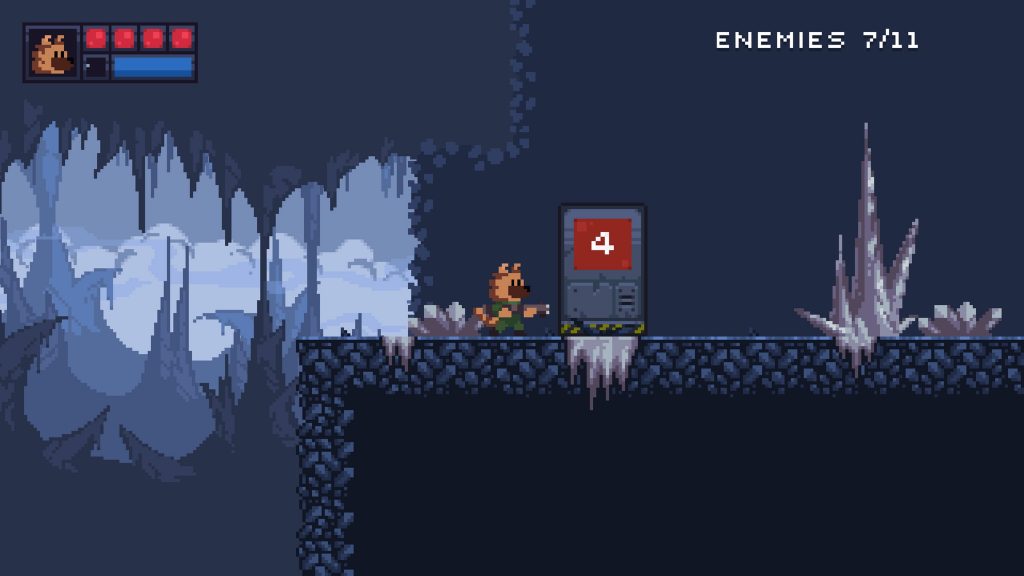 There are only two difficulty settings in Easy and Hard, changing between them will reset your progress annoyingly. Easy is quite forgiving, with checkpoints strewn around the level where you’ll respawn. In fact they’re better than checkpoints as when you die and respawn any enemies you killed after the checkpoint remain dead, so all it really does is revive you at a specific point of the level.

Hard mode gets rid of these, but each mode allows you to take four hits before dying. There are plenty of instant kill pits in the game however. If you do die in hard mode then you start at the beginning of the level with zero enemies killed which does up the challenge dramatically thanks to the aforementioned pits and the fact that projectiles can come from nowhere. Stalactites falling from the ceiling or enemy shots appear without warning and often from off screen meaning you get hit through little fault of your own. If this happens over a pit then you’re in trouble as the knock back on each hit is massive meaning you’ll fall to your death and there’s little you can do about it. An annoyance on easy difficulty as your weapons reset, infuriating on hard.

Speaking of knock back, each time you fire your weapon you get knocked back also. Again this is annoying when your weapon is incredibly short range already constantly pushing you away from your enemy and it’s even worse if you’re stood on a small platform as it restricts how much you can shoot or you’ll simply fall off. I can sort of understand the weapon powering up (powering down each hit less so) but the knock back each time you fire is a very odd decision that doesn’t add anything. 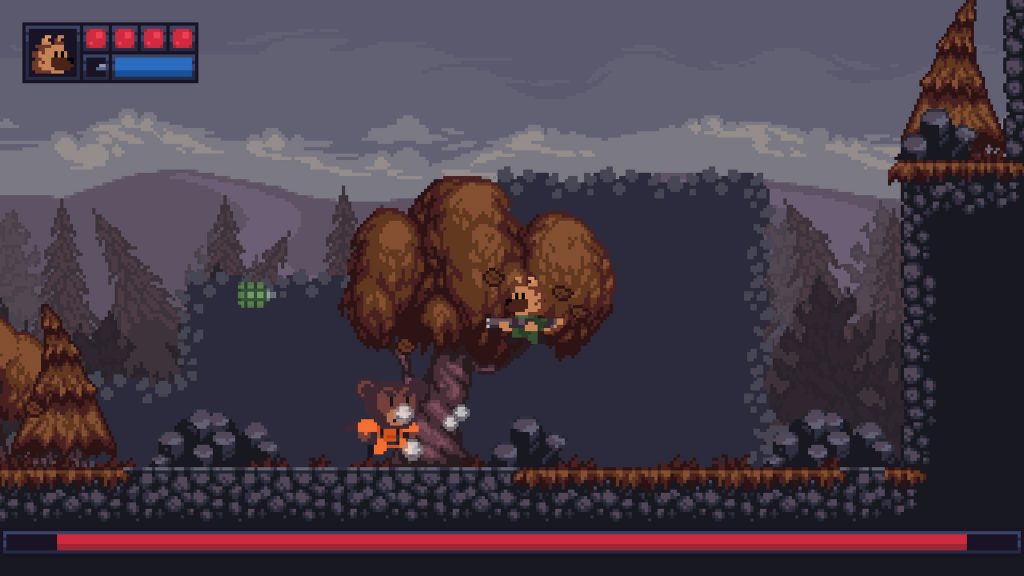 There are twenty stages in all, four in each of the five worlds and the fourth level ends with a boss fight. There is some very minor pattern recognition but each boss only really has one move, maybe two at best and all that happens is as their health depletes their attacks speed up. If you’ve got powered down weapons then there is no way to power them up within the boss fight so you’re in for a long, tedious fight. It reminded me of playing Guitar Hero on Easy difficulty after you’ve moved up to Hard or Expert. Is it difficult? No, but it takes so long that mistakes creep in which leads to more frustration.

Presentation-wise it’s very bare bones with incredibly simple 2D graphics and some chip tunes. Some of the earlier music actually reminded me of some old 8-bit home computer games in a good way but some of the later stuff is actually quite bad.

You’ll have the platinum by the end of stage twelve if you’ve managed to find the hidden box on each stage leading to that point, the only other trophies being for starting the game and defeating the first two bosses. They aren’t too difficult to find and I had all the trophies in about forty minutes. 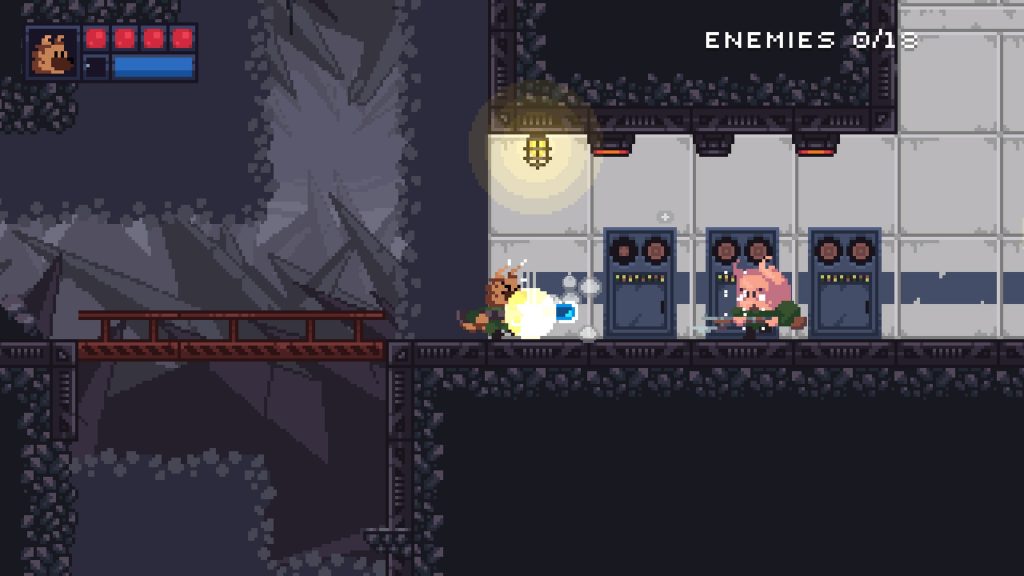 If you are a Ratalaika regular then this will give you more of what you’re looking for. It’s cheap so maybe others will get some joy out of it but it’s tough to recommend. Most of the mechanics that make Thunder Paw stand out are actually more irritating than welcome and detract from the fun of simply playing it.

Thunder Paw
5 Overall
Pros
+ Easy mode makes some good concessions
+ Two straight forward platinums
+ Some okay music
Cons
- Weapon mechanics aren't fun
- Knock back when firing is just annoying
- Some cheap hits
- Boss fights are far too simple
- Some bad music
Summary
Thunder Paw has some interesting ideas but most of them are actually for the worse and the basic gameplay doesn't do enough to make up for it. You'll get a PS4 and Vita platinum out of it very quickly and it's cheap as we've come to expect from Ratalaika.