From Italian indie dev Studio Kiku and publisher Innovina SRL by way of PQube, we have dystopian nightmarish isometric adventure The Plane Effect.

The setting will be familiar to anyone who worked in an office in the before times. A slightly downtrodden male individual finds himself the last person in the office after hours and probably wonder why he’s doing it.  Upon finding a paper aeroplane discarded on the office floor, he decides to throw it for no other reason than he can. It captures the drudgery of a day job pretty well, barring the going for a crap on the company dime. 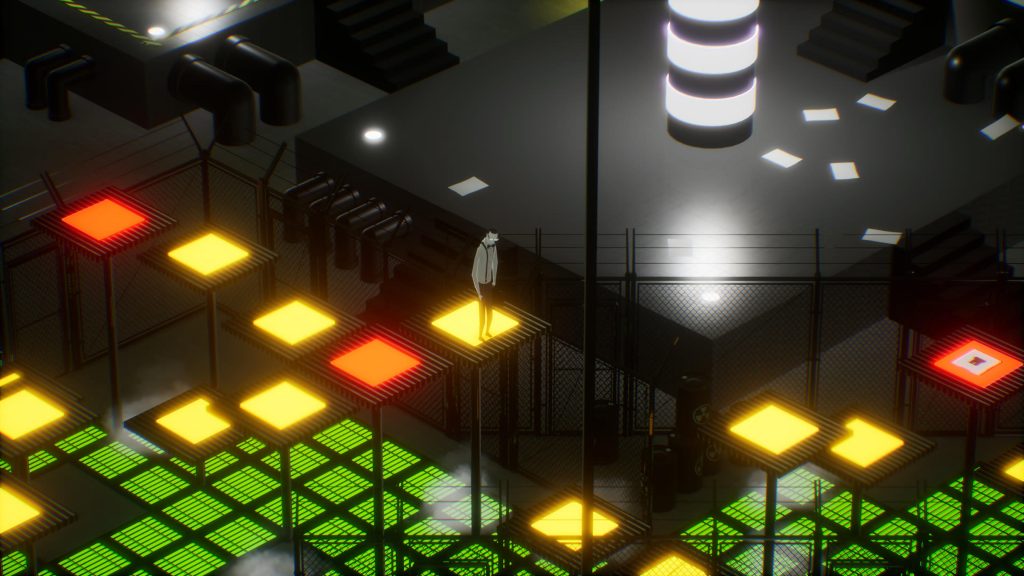 It’s about here that you get a hint of the arbitrary nature of how things unfold. Upon trying to leave the office you get an ‘hm hm’ that transcends language. It reminded us of Eric Idle’s ‘that doesn’t work’ in the first Discworld game in terms of how often you hear it. It turned out that we had to find a coat and scarf before leaving the office.

But due to our dumbassed decision to go it alone at the outset rather than taking the hint option, we were stuck with one fairly fixed path throughout. It got worse when we left the office and headed to the tube station. It was clear that we had to get a ticket and then board a train. But what a convoluted path. We bought a ticket. It got caught by a gust of wind and blew down a drain. Once again, it was clear we had to retrieve it. Only on this occasion the placeholder graphic for the ticket was so damn tiny that it was impossible to see where it had actually ended up. 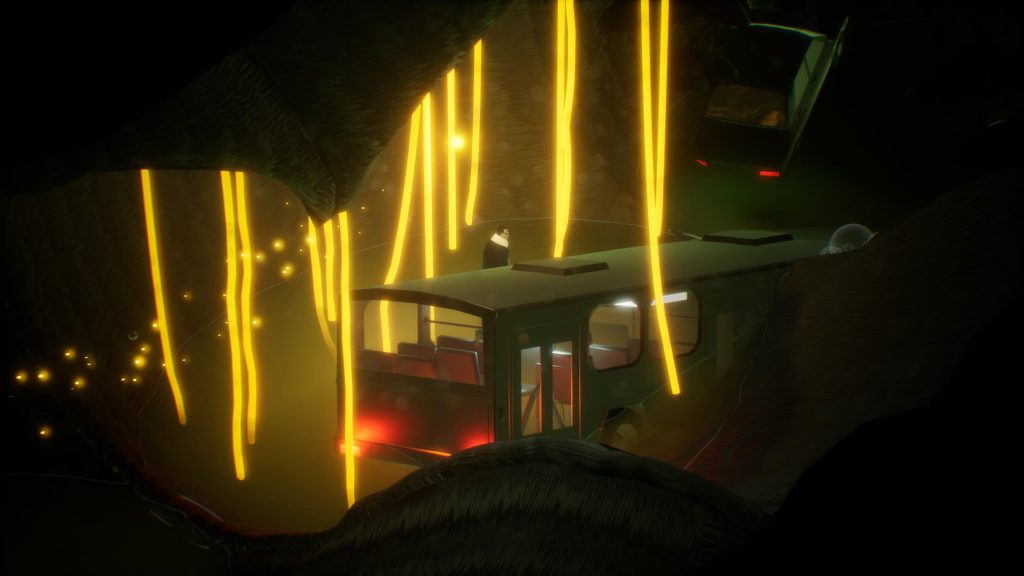 Cue lots of fumbling around, dying for no obvious reason and general frustration. It was only through sheer luck that we  managed to prevail and find our ticket and hence board a train home. Or so we thought. Things rapidly take a turn from the grimly depressing to the slightly baffling. Trying to cross a street against a red sees you reprimanded by a drone-like character and you’re killed.

Death is by no means final here though, you’re merely reset to the last quicksave location. And so you try again. The next few levels pass fairly easily, though you soon hit roadblock after roadblock. The problem is that puzzles here generally fall into one of two categories, either absurdly obtuse or solvable by sheer trial and error. The obtuse ones we managed somehow by accident for the most part. Or the trial and error attempts we died over and over by way of electrocution before finally succeeding. 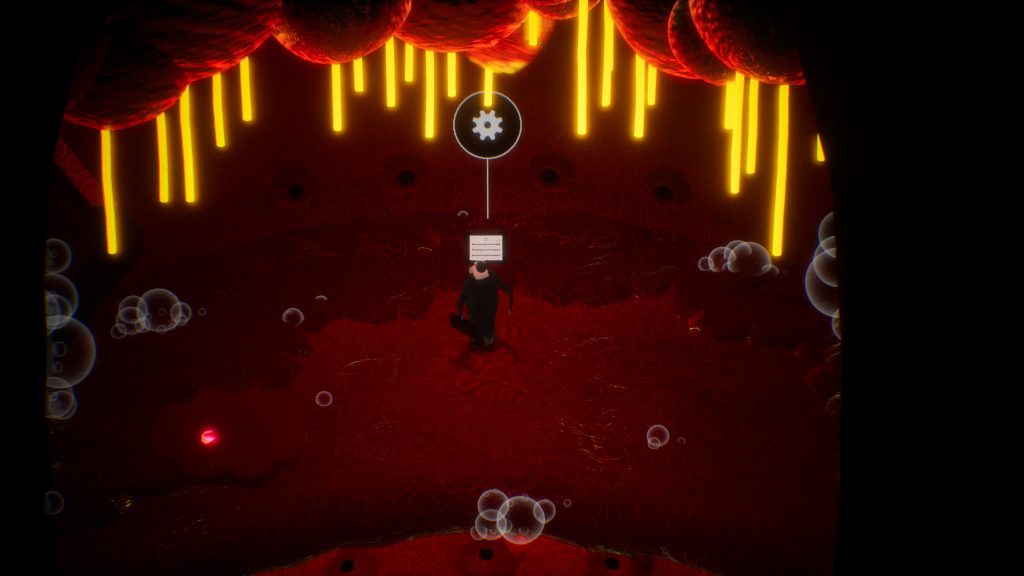 You see, electrocution is a common way to go here. Along with getting hit by a car or falling off a moving platform. Or being eaten by a desert dwelling alien thing. You’ll die a lot, but for no discernible penalty other than missing a trophy for a perfect run in one instance.

Another infuriating trait is when you see an object that’s clearly to be interacted with at some point, yet at the precise moment you encounter it, you’re greeted with another ‘hm hm’. Cue finding the location that needs the obvious item and having to backtrack to get it. It’s a cheap way to prolong the game and doesn’t elicit any sense of achievement, more frustration.

No sooner have you muddled your way through one puzzle then you’ll find yourself baffled by another. Not in a fun way either. Then you’ll have what you think is a breakthrough only to realise that it was all for nought as you’ll be stuck once again. When you reach the ladders and the irradiated pool you’ll understand our frustration. That is, if you’ve not sacked off The Plane Effect before then. Once again, context is everything and your path to progression will be blocked once again. 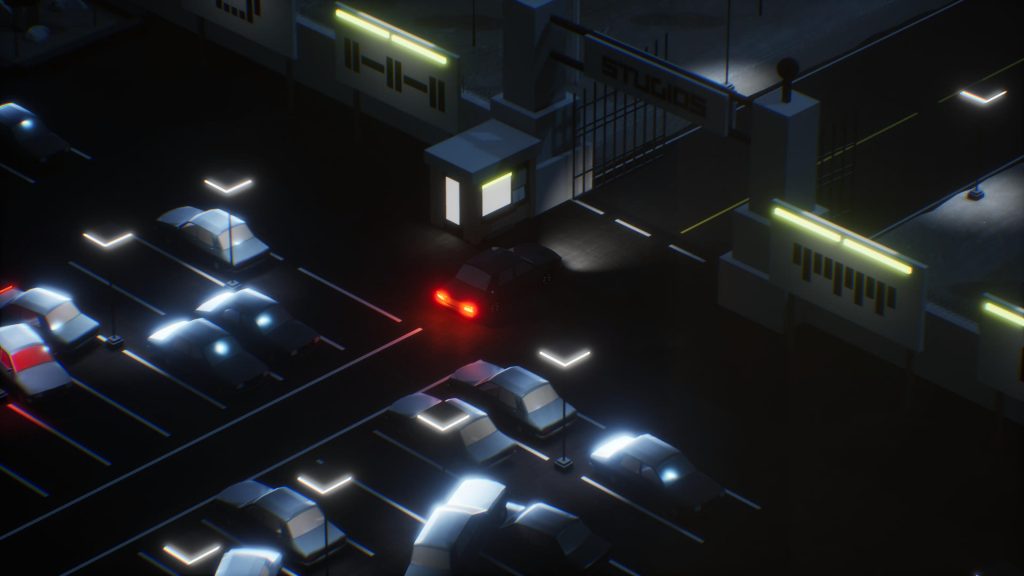 The excellent music by Roberto Giglio sets the mood quite well and is very chilled with it. It’s just a shame the maddening puzzles leave us baffled. As you can see from the screenshots, the graphical style is muted but effective with it.

Once in a while you’ll get a traversal level to monkey around in which makes for a very nice change of pace. If nothing else, it means no puzzles to struggle through. But before you know it, yup, yet another puzzle you’ll be trying to get your head around. It’s maddening. Sometimes we solved puzzles and had no real idea how we did it, we were minded of another game we reviewed, Call of The Sea in that respect. 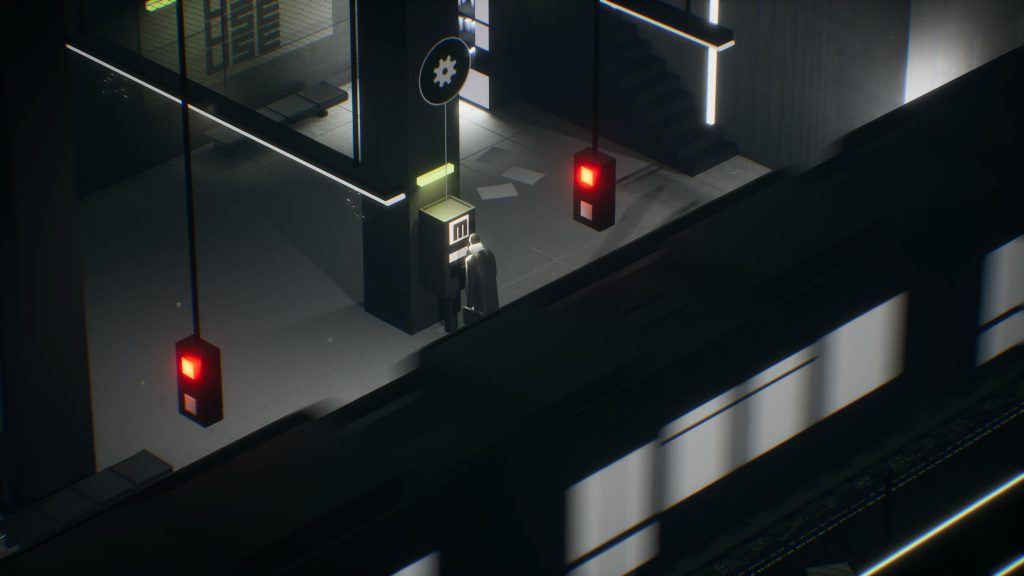 There’s a plot of sorts here that seems to depict a wife and child to our spindly protagonist, but we’re still not entirely sure as to whether they actually exist or whether our progress is merely a descent into madness. Unfortunately before reaching the end of the story, we had to call it for the purposes of getting this review written. Perhaps he finds his family, perhaps he doesn’t. We hope for a bleak ending as payback for the wringer this game has put us through.

In conclusion, The Plane Effect is a stylish yet infuriating puzzle game with inconsistent balancing throughout. For every puzzle that has you feeling like you’ve actually had a little deduction come into play, there’s two or three more that will either have you completely stumped or resorting to outright trial and error.

Cons
- Too reliant on trial and error
- Arbitrary nature of puzzles means you can't deviate. At all.
- Yes we get it. Hm Hm.
Summary
The Plane Effect is a stylish noir adventure about a salaryman's commute gone wrong. But it's let down by fussy puzzles and too much trial and error. You solve it the devs exact way or you're out of luck.