As regular as Chelsea (spit!) getting an easy draw in the cups, here is FIFA 22, this year’s iteration of EA’s incredibly successful football simulator.  It comes as their nearest competitor, Konami’s PES series, has somewhat imploded by turning into the awfully named, free-to-play eFootball.

So, you’d forgive EA for taking it easy this year but they’ve been busy.  Where last year’s FIFA 21 had the awkwardness of coming right at the start of a console generation, EA have had a year to get used to the tech and now that the story mode (‘The Journey’) is long in the rear view mirror, we were keen to see what, if anything, is new this time. 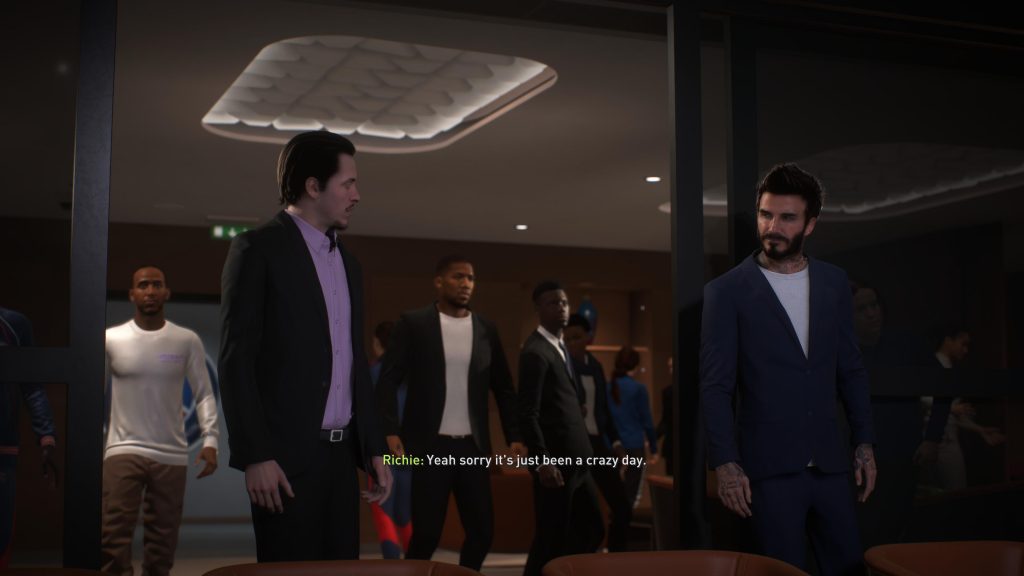 The first thing is an interesting tutorial that takes the form of a little bit of story.  You’re put in the shoes of a decent street player who is inexplicably given the chance to have a trial with Thierry Henry.  You’ll practice the basics of running and passing while travelling through the streets of Paris before hitting Le Parc des Princes, the home stadium of Paris St. Germain.  Here you’ll learn some of the new moves that are now available to you in FIFA 22.

button.  Also new are the abilities to manually switch players using the left stick instead of using R1 to pick the nearest player, but to be honest

does a better job, and similarly you can also get off-the-ball players to make specific runs too.  This last technique however tended to cause us to lose the ball almost every time, so don’t expect to absorb these moves into your arsenal right away.

Beyond that though, FIFA 22 is quite predictable which will be no surprise.  All the modes you’d expect are here with manager and player career modes, the return of last year’s Volta mode (FIFA‘s answer to the much-missed FIFA: Street series) and, of course, the coffers-filling behemoth that is the FIFA Ultimate Team (FUT) mode.  Of course there are tweaks to each but nothing ground breaking or new and this is despite a move away from the previous Frostbite engine to the new ‘HyperMotion’ one. 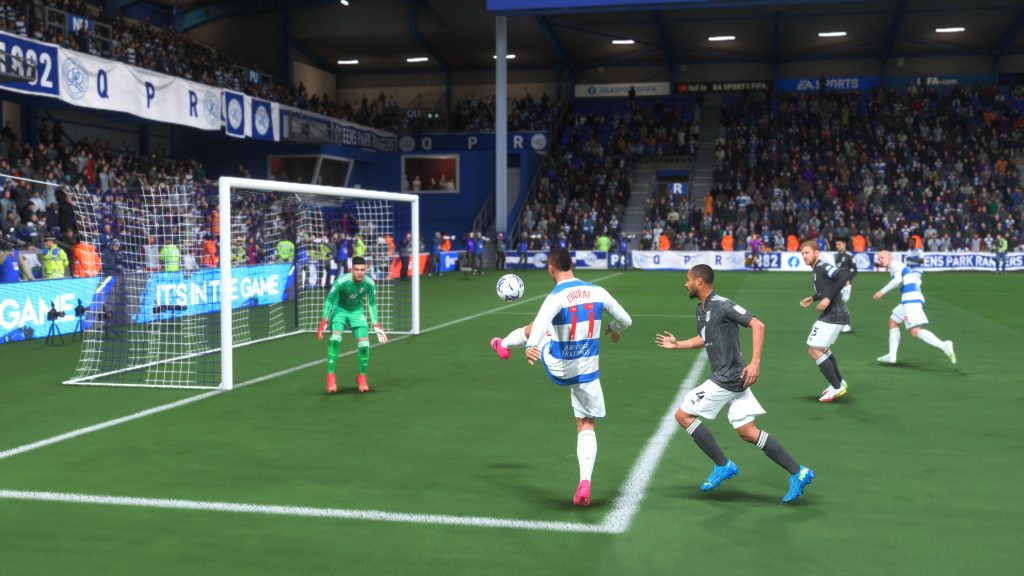 The new engine claims to bring together improved AI machine-learning and improved motion capture technology.  Of course, EA have been simulating football in a 3D form since the original PlayStation’s FIFA 97, so they’ve pretty much had every animation you can imagine needing in a football game and yet we were still surprised at how free and fluid the animations are here with players reacting to the ball no matter what pace and trajectory the pass was played with.  This includes players improvising to attempt ridiculous half-scorpion kicks or bringing the ball under control from mid-air with the confidence of Zlatan himself.

Unlike every other review, we’re not going to dignify the game’s slower pace with any analysis.  FIFA and PES have always used speed and tempo as a way to make each release feel different, essentially switching from a fast year to a slow one regularly.  But yes, this one is less about pace and on harder difficulties, and online, you’ll not be able to speed past the last defender to have regular one on ones with the game’s admittedly improved keepers. 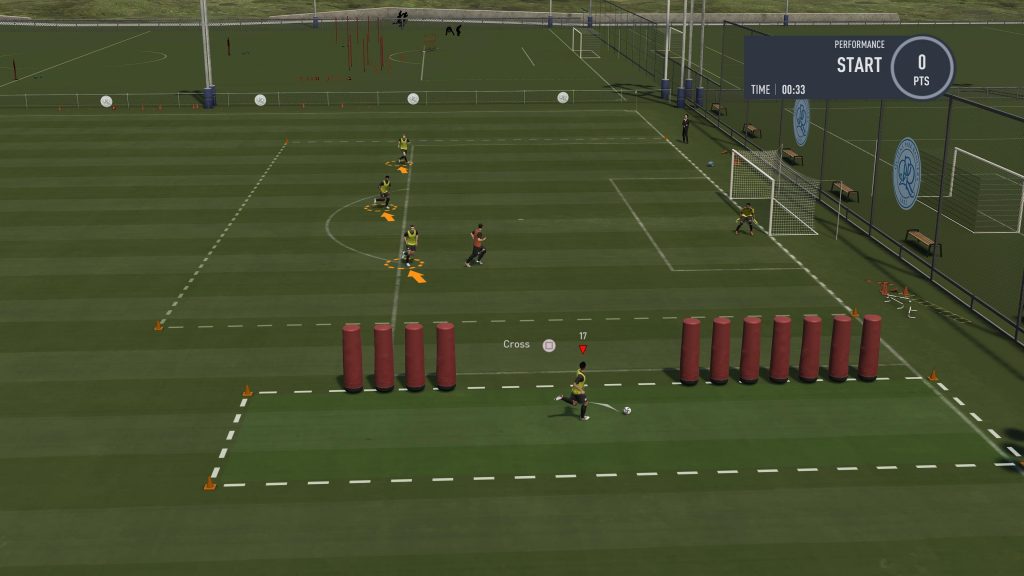 The problem is that there have been plenty of great FIFA games over the years, all doing a fantastic job of simulating football and so unless the sport itself changes, there’s not really anywhere else to take the series as a whole.  And so, as usual, detractors will see this series as a £70 yearly subscription while fans will be happy to lap up the huge line-up of licensed teams and players while having the chance to start all over again on FUT (which has always seemed a bit unfair but if you’re prepared to throw money at lootbox packs each year, that’s on you).

As ever, we don’t tend to mess with FUT and instead stay in the more financially-advisable career modes or online matches with friends and, of course, these modes work exactly as you’d expect.  The manager career now has an insane amount of depth, taking the SWOS meets Football Manager template to near-exhausting levels which the player career focuses on player development.  Both are plenty of fun though unless you’ve tired of them over the years.

Volta’s street-based, showy-skilled pick up matches are a lot of fun if you want to play some nice 3v3/4v4 matches that are more about taking liberties with your opponent than hitting the net (not that there is much of a net in these environments).  We’d been hoping to see the return of FIFA 98‘s five-a-side mode for years and while this isn’t it, it’s close enough for us. 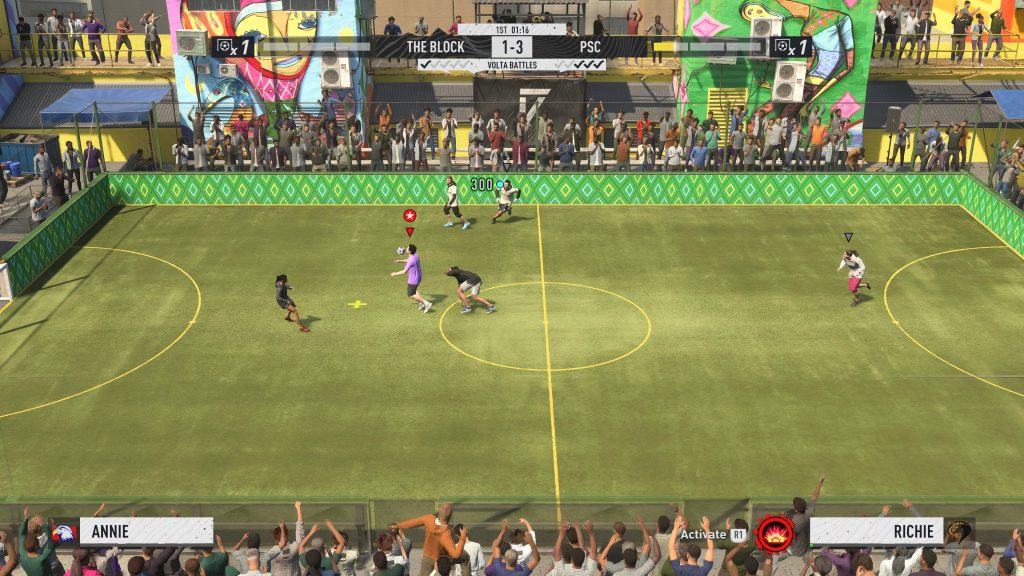 But this is all a bit of a host for FIFA‘s main money-maker, FIFA Ultimate Team, and talking about it is unavoidable.  On the plus side, the idea of earning and trading players in order to build a cohesive side with great chemistry seems like a great idea and it was when the mode was first introduced in FIFA 09 (as DLC and then FIFA 10 as part of the main game).  These days it’s a game in itself with fans avoiding the other modes and just focusing on throwing money at the game in order to get Cristiano Ronaldo and his outrageously long neck.

Despite protestations from actual governments, plenty of negative media coverage and some significant legal challenges the mode remains with its microtransaction-based player packs still in place.  With patience and a little imagination you can put a good team together.  But of course some prick will be out there throwing real money at it until they’ve got a starting eleven that’ll made your side look like Hashtag United.

It’s not going to change any time soon though and as it is always going to be a bit pay-to-win, we’re not going to recommend it.  But if you’re already about that life you aren’t going to care much what we think anyway.  May all your packs be gold and not full of player contracts. 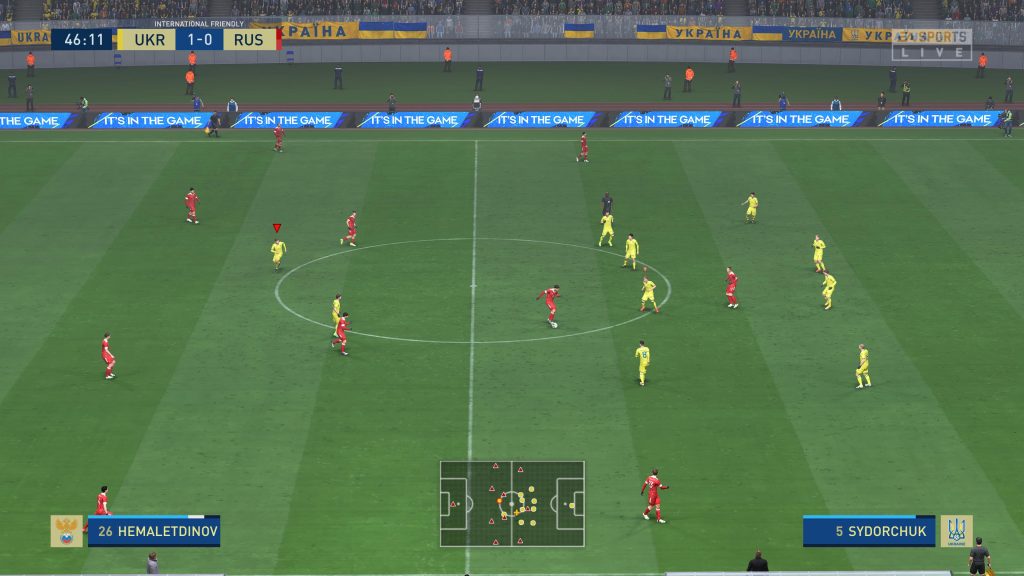 Having swerved last year’s outing, I personally am actually very impressed with the presentation this year.  Of course we expect every detail of football and it’s TV presentation to be well recreated here and it is.  The new engine stands up to close inspection on our 65 inch Sony (especially in direct comparison to eFootball) and there’s a sense that they really wanted to flesh things out this year with little details like how transfer and player negotiations now have an unnecessary cutscene to accompany them.  We’ve never really cared for the soundtracks on FIFA games though and that continues but the in-game sound effects are very competently executed and the commentary team does a satisfyingly adequate job of describing the action.

As ever, the new FIFA does what new FIFAs always do.  We’re too far in to see any meaningful change and so if all you want to do is have a realistic kick about then any of the recent FIFAs will scratch that itch.  If you want the same experience with updated players, kits and league standings then this is the version to get (and it’s almost worth it just for the inclusion of Ukraine’s fantastic Euro 20 kit).  It’s as complete a football game as we’ll ever need and it really leaves no stone unturned when it comes to simulating the sport but you already knew that.

FIFA 22
8 Overall
Pros
+ Impeccable visuals
+ On the pitch gameplay is as good as ever
+ Has months worth of content
Cons
- FUT is still a pay-to-win racket
- New gameplay elements don't add a whole lot
- Career Mode is arguably a bit too in-depth
Summary
While EA continues to leave no stone unturned when it comes to bringing football to gamers, it would be wrong of us to condone the lootbox mechanics that still dominate the Ultimate Team mode. But if you're happy to swerve that and just stick to regular matches, and the game's two enormous career modes, then FIFA still sets the bar incredibly high for football games and indeed sports games everywhere.