G-Darius HD is an upscaled port of the original G-Darius, a horizontally-scrolling shoot ’em up that was released in 1997 initially as an arcade game before getting some degree of popularity on the original PlayStation.  It remains a favourite among fans of the Darius series and recently that series has been revisited across all the consoles via some compilations that feature the arcade originals and their console ports.

Where the previous Darius game, Darius Gaiden, used 3D models converted to 2D sprites, G-Darius felt at home in the PlayStation-dominated ’90s thanks to its proper polygonal visuals and much like with R-Type Delta, this allowed the big bosses to shine.  The gameplay was still 2D but the extra dimension was just used to make things look a bit more modern.

This particular release gives fans two versions of the same game, being the arcade original G-Darius arcade game and a new enhanced port, G-Darius HD which smooths out those ’90s visuals. 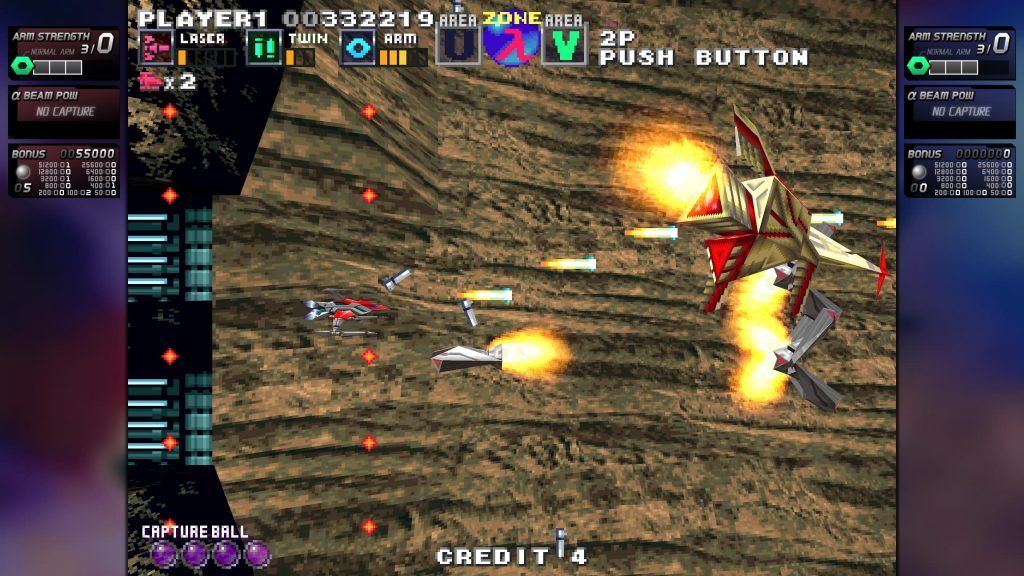 Both versions appear to play the same though, so let’s get into the gameplay first.  We’ve recently dabbled with the Darius series thanks to Darius Cozmic Collection (Console and Arcade) and Dariusburst: Another Chronic EX+ and G-Darius takes some of the core mechanics of the series while changing or removing others.

In true shoot ’em up style, you play as a lone spaceship (unless you’re partaking in the game’s two-player local co-op mode) known as the Silver Hawk and you’re tasked with getting through five stages of frantic arcade action.  As expected you move using the left stick, or d-pad, and then have a few fire buttons that all do the same thing (er… shoot) but with various levels of autofire.   Along the way you’ll face enemies that are a mix of sci-fi archetypes and, of course, the series’ iconic robotic fish-like enemies. 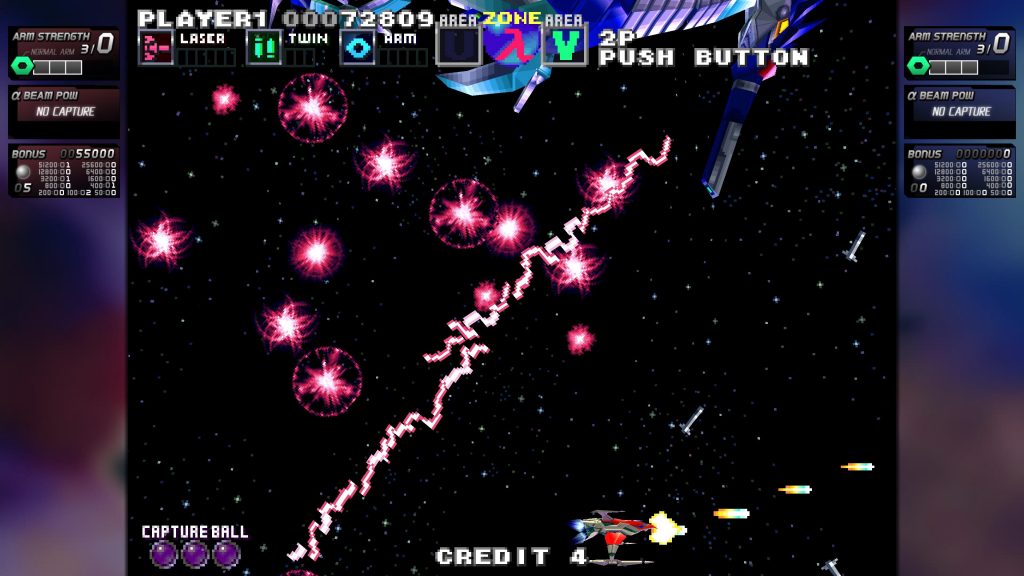 Initially it all feels very familiar and very comfortable to play as you fly through the first stage blasting enemies, picking up upgrades to your weaponry and armour before facing off against the first of the game’s massive bosses.  It’s very much Darius as you know and love it.  And that is evident with the game’s iconic branching routes (which give you a choice of fifteen stages depending on the route that you take) and these range from quite tricky to absolutely bastard hard.  Interestingly, each level also has a branching path in it too, so for example you might go up to take the battle to the skies or you can go underwater.  It’s all counted as one stage but it does add some nice variation.

Thankfully, this version has a wide range of difficulty settings and you do have infinite continues so even if you suck at this type of game, you will be able to slog your way through it all and see all the content.  That’s good because if this limited you to a set number of continues, the often harsh and unfair boss attacks would soon suck the fun out of the game.  Even with the additional help, it still takes ages to take some of them out.  And because the bosses don’t show much damage, these battles can often start to become tiresome and unenjoyable and if you’re looking to 1CC the game, the horrible, untelegraphed boss attacks will definitely test your patience.  A handy quick save system does help mitigate this but it’s not very satisfying if you effectively cheat your way through the game. 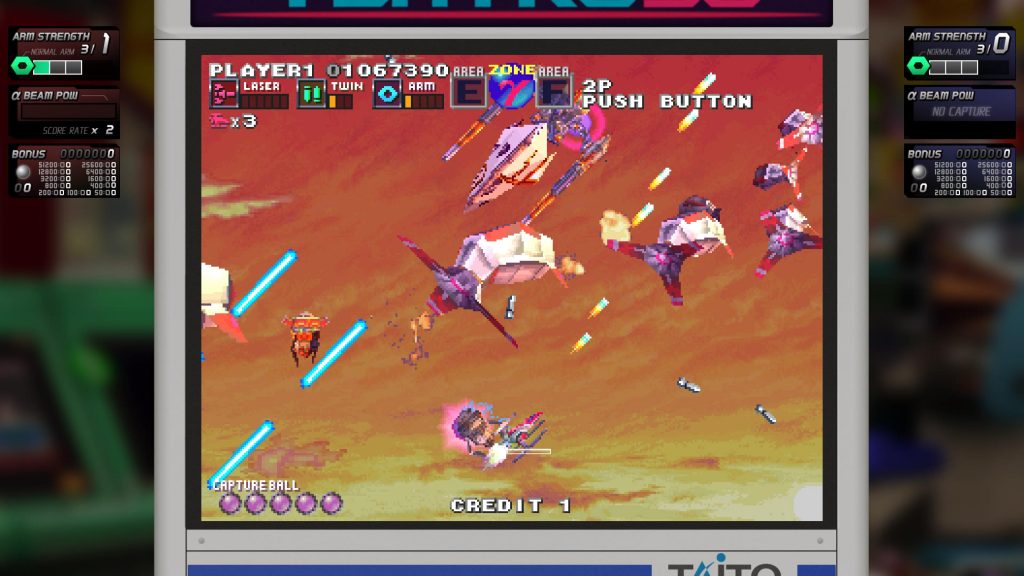 Another issue, in terms of difficulty, is that the weapon upgrades take forever.  In previous Darius games it wasn’t as hard to get from missiles to lasers to waves but here it seems to take forever and every death pushes you back to the lowest level of whatever weapon you have, so that’s not great.

G-Darius did add one very cool feature to the gameplay though.  You are now armed with a number of capture balls and these can be used to literally capture individual enemies who will then join the fight for you.  Most will fire along with you (either forwards or backwards) or will act as shields.  Captured enemies can also be sacrificed as bombs or be used to fire a large beam, which is useful if you counter a boss’ mega-laser attack with it.  It’s a very cool mechanic and it’s nice to experiment with capturing different types of enemies. 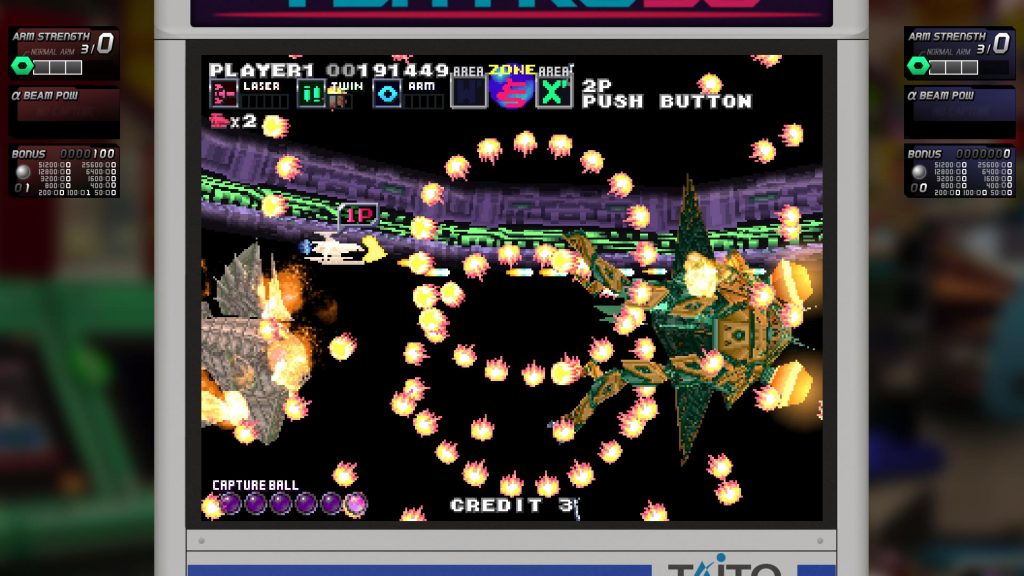 It’s a shame that the game doesn’t really tell you about any of these systems that are on offer and you are left to either figure out yourself or delve into the electronic manual in the menu system.  It’s good that that is there but we’d have liked it if the original 1997 game had catered for new fans a bit better but that’s crying over 24 year old spilt milk.

In terms of this release, what you get is the original arcade game with no gameplay embellishments.   The HD option gives the game the same sort of sharp look that you get when you enhance a PS1 game via emulation and that’s because that is exactly what this game is doing.  The visuals have aged a fair bit anyway but we actually preferred the original arcade version over the HD port as it looked a bit more natural and, for some reason, felt smoother but the HD version does have better use of colour.  What this game ideally needs is a proper remake (or sequel) to help it to get back into being some serious eye candy as here the HD really just highlights how primitive the 3D models look. 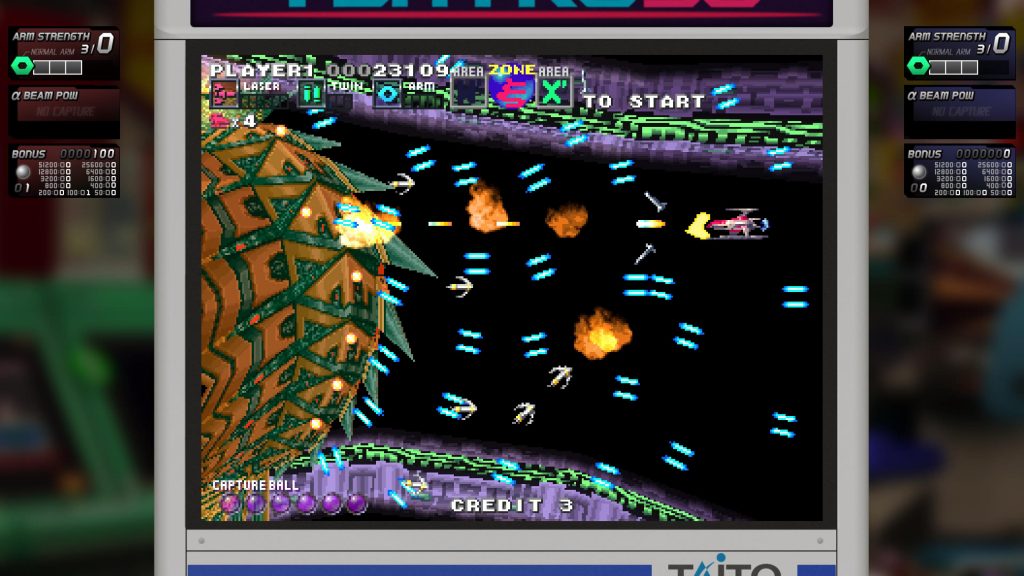 But with that said, the varied level designs and huge bosses are definitely the stars of the show here and they’ll always look pretty cool no matter how badly the game’s presentation has dated and, of course, you get a soundtrack full of absolutely crazy bangers just as you’d expect from any Darius title.

Ultimately, the issue here is that the difficulty is probably just going to be too much for casual players and it is hard to recommend this over better looking games like Söldner-X 2, a game that actually tempered the difficulty of its recent PS4 port and made it actually a lot more enjoyable.  But if you’re a fan of the original G-Darius then this is obviously going to be an essential purchase for you.

G-Darius HD
7 Overall
Pros
+ Some of the best gameplay mechanics in the series
+ An authentic port that will appeal to existing fans
+ Excellent music
+ The game does try to mitigate some of the difficulty
Cons
- Difficulty spikes and lengthy boss battles can spoil the party
- The HD overhaul makes the game seem more dated
Summary
G-Darius remains a true late '90s classic and old school, or just old, shoot 'em up fans will enjoy revisiting it but newer players might not enjoy brute-forcing their way through the game's excessively difficult later levels.