I’ve never been to a circus but do have a fascination with travelling showmen like P.T. Barnum. There’s something compelling about the mix of grift, charisma and talent and The Amazing American Circus is here to recreate the experience in card form. Juggler Games have done well with the 19th Century aesthetics but the balance of the actual card dealing feels a little off. 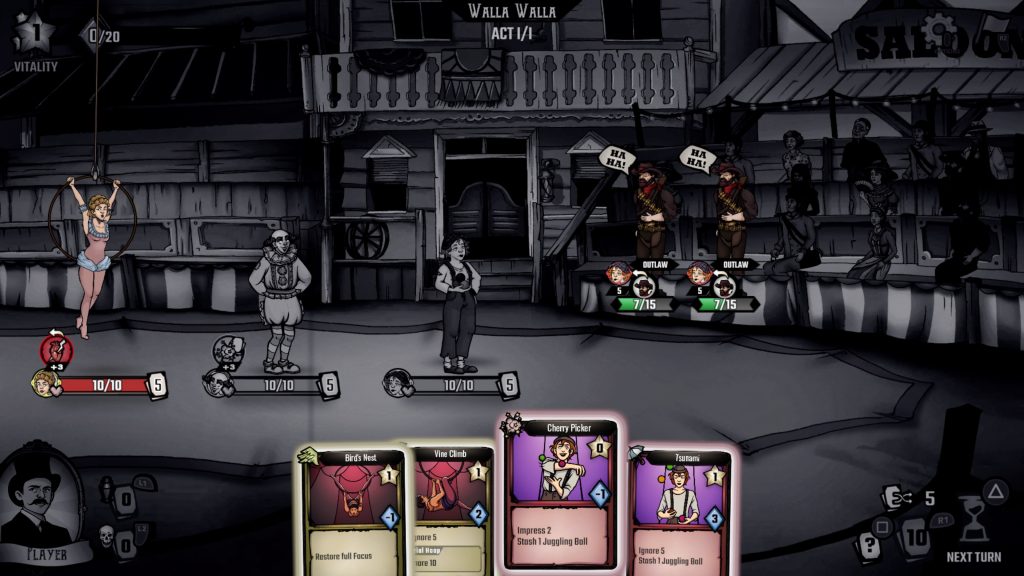 It’s a relatively simple card game to grasp. Your performers come with their own cards and three of them can take the stage at one time. They have five cards which gives you a deck of fifteen to play with. Five cards are randomly dealt at a time and you generally shuffle between turns. They are primarily used to impress audience members or guard your performers against heckling.

Each performer has focus points that are effectively that person’s health. If one of your crew runs out of focus on stage, you have to scrap one of their cards before the next turn. If you run out cards, the performance is over. Once the audience is defeated, you win and can move on to another venue. There’s also a finale mechanic which allows you to finish a show with a flourish. I believe this is an instant win but I’ve not managed to pull one off outside of the tutorial. Each card has a value that counts towards the finale.

On the face of it, there’s not much to keep track of. Some cards do multiply and stack attributes but, at the most basic level, it’s a game about defence and attack. In the early going, I found success going all in for cards that deal heavy in impressing the audience. Some events span multiple acts but the smaller ones do allow you to sacrifice cards in the name of getting the job done. These can be done in minutes and you’re rated on how many performers remain on the stage. This reflects your payout, on top of any promotion you decided to do for the event. 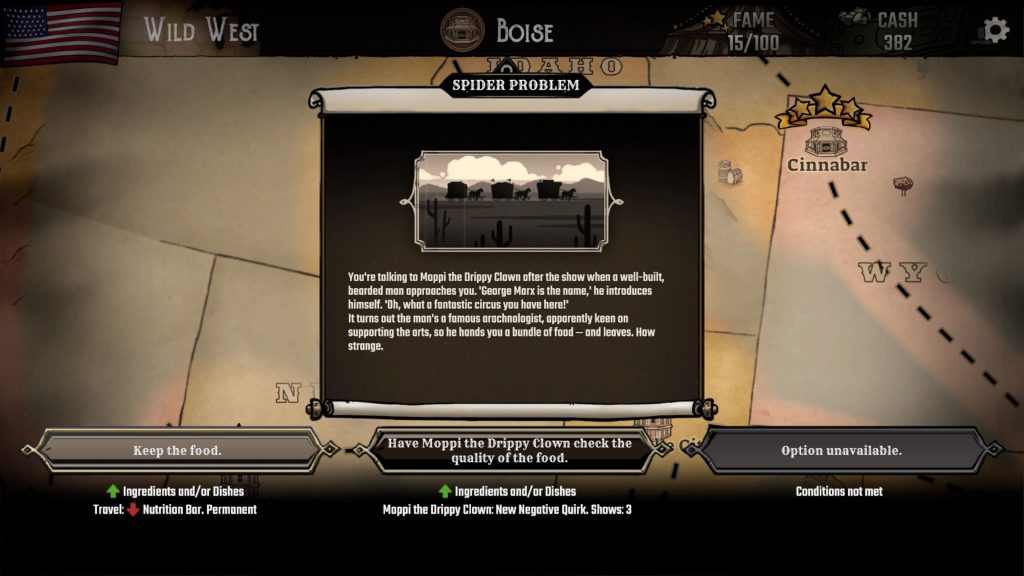 Unfortunately, when battles drag on, it seems inevitable that you’ll lose people from the field and cards from the deck. You can pre-emptively play ignore cards to halt the rot but it seems the audience will have the upper hand. Not only can they buff themselves with attributes like sneer, some can heal other audience members and throw junk into your hand. On top of that, cards that effect multiple audience members feel hard to come by. Focusing on a single onlooker does feel an odd choice but, within the constraints of a card game, it makes sense. You’re only up against a crowd of three at any time. It would be nice to see them adhere to the rules you have.

Scrapping cards is a punishment that all seems to happen all too often and defeat comes at a fairly big cost. Any money you spent on promotion is lost and you can’t retry that venue again until you’ve visited a few more cities. Travelling doesn’t cost you money but feeding your troupe on the road is essential to keep them happy.

Away from the card battles, you can manage all aspects of your circus. You can upgrade your tent to allow for bigger payouts, upgrade your current performers for new cards and generally do everything in your power to make your crew more efficient. It’s an expensive business with only the food really coming cheap. Maybe I expected more gains from upgrading things but it seems like you don’t get much for your buck. 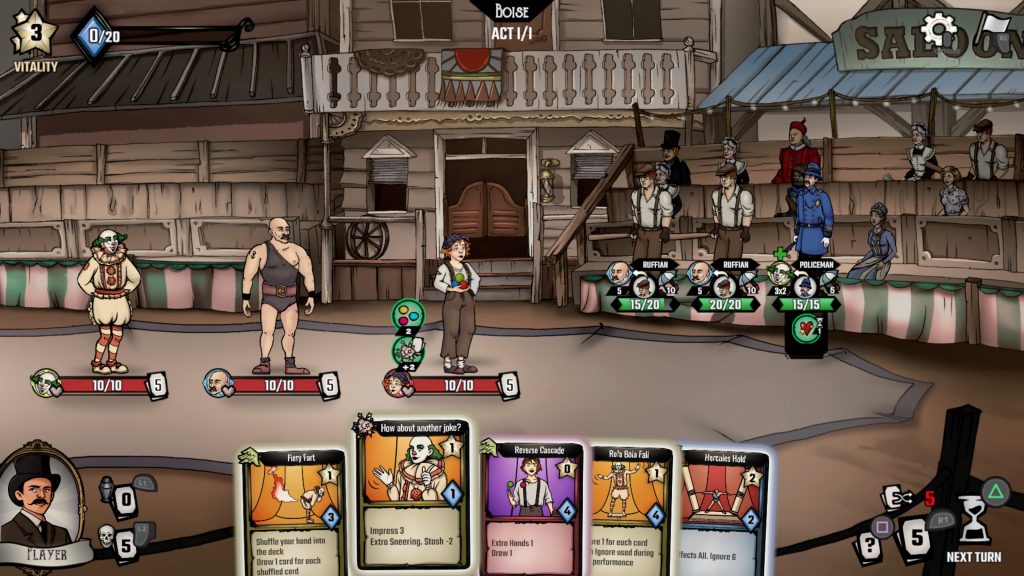 Upgraded performers allow you to upgrade their deck or add new cards but they feel like minor tweaks rather than crucial improvements. New hires appear sporadically in new towns and they can sometimes prove useful. Finding a fire-eater early on did give me more ways to attack an audience and get some easy victories. Every performer seems to have some kind of trade-off. They’ll have positive and negative traits that, to me, seem to cancel each other out. Even with the money I’m pouring into the machine, I’m not taking the big strides I’d hoped for.

You do also come across random events that can effect your time on the trail. Some of these are as simple as handing food out to passers by or prioritising one performer over another. It does break up some of the monotony but the style and simplified nature of the presentation scuppers some of the attempts to keep the game fresh.

The Amazing American Circus gets the look right. All the character art replicates a 19th century poster really well. Strongmen look particularly burly, trapeze artists look dainty and it all carries that period appropriate look fairly well. Everything has a sepia tone to it and it’s all very vaudevillian in construction. There’s plenty of charm to it, although the time inside the tent looks a little stale by comparison. 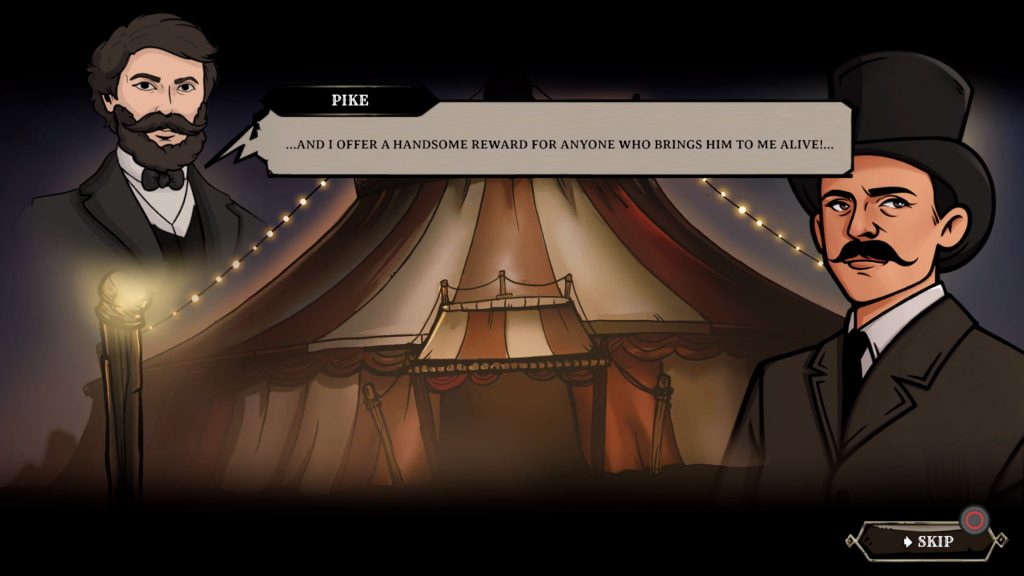 Whilst you do go city-hopping across the states, you don’t see a change of scenery. Big tops carry the same look as the smaller shows so I’m not really seeing a progression across a vast nation. What does change are the audience members who at least carry some sense of identity. Animations are kept short but lively enough to catch my eye. There’s at least a good variety to them but it would have been nice to see the scale of your operation and the locales increase over time.

Overall, I just couldn’t get a grip on The Amazing American Circus. Performances quickly move from simple one-act episodes to wars of attrition and I don’t find the rewards for success especially worthwhile. It becomes a bit of a grind and, whilst the aesthetic is great, it would be nice to visibly see your circus grow over time.

The Amazing American Circus
5 Overall
Pros
+ Really accomplishes the period aesthetic.
+ The performers have plenty of variety to them.
+ The basics of the card game is easy for newcomers to grasp.
+ The random events change things up between the card battles.
Cons
- Performances feel weighted unfairly towards the audience.
- Multi-act performances can really drag on.
- Upgrades feel expensive and don't tend to give you much in return.
- I don't really get a sense of progression as you move across the map.
Summary
I find The Amazing American Circus to be a very unbalanced experience. Simple on the surface, the card playing becomes more of a struggle as audiences turn against you. The lovely sepia look can only do so much as you slog your way through the continent and I don't think the upgrades turn the tide much in your favour. I find it boring at times and the card playing can feel so harsh as you get into longer performances.