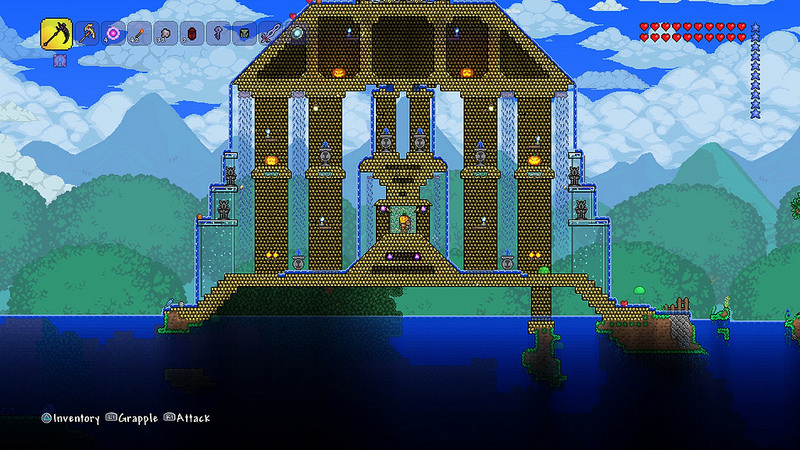 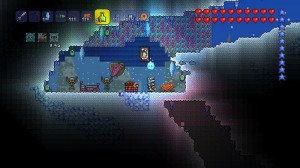 When Terraria arrived in 2011, it was easy to write it off as just a 2D Minecraft clone and on the face of it, that’s a fair conclusion. It certainly shares a lot of similar gameplay elements. You play as an explorer who has to dig through dirt and stone in order to find precious resources with which you can build better equipment in order to be able to dig through tougher substances. There’s a day/night cycle with zombies plaguing you after dusk and the depths bring tougher enemies but richer rewards.

Viewed from a side-on 2D perspective, the game’s simple graphics and design allow for mass exploration but also some creativity. Where Minecraft‘s creative element is all about massive structures that look great in the game’s third person viewpoint, Terraria is a tad more practical. Out of necessity, your first job is to build a house – not for night time survival but rather to attract NPCs to your house that act as merchants – and as you go along, you keep adding to it. Sure, you can make massive, ornate castles if you choose but Terraria works best when you are making practical structures that serve a purpose.

Indeed it’s that purposeful approach that permeates the whole game. For a game based on sprawling exploration, there’s also a linear thread that runs through Terraria. Everything is based around getting yourself in a position to summon, and defeat, the next boss and Terraria has several of those. There’s a nice sense of progression to that and it’s nice to have something to work for as you play but also you can just meander about if you so choose.

The gameplay itself is really simple. You’re either walking, jumping, fighting, digging or building and all these elements in themselves are pretty straightforward. The complexity comes from the sheer number of items in the game and these days, after many patches to the original PC version, there are a ton of things to find and make. Making items effectively upgrades your character and before long you can have wings, ninja climbing gear, powerful weapons and all sorts of other fancy items and it’s in this element of the game that you get the addictiveness. 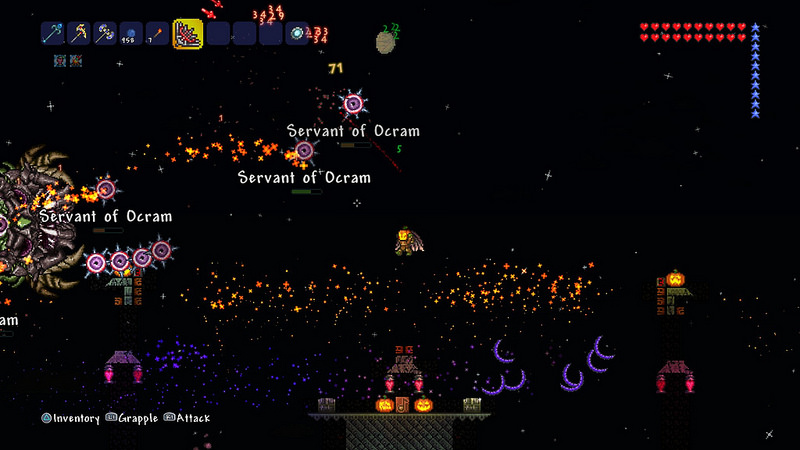 Now I love Terraria – having spent a hundred or so hours with the Xbox 360 version – and this version doesn’t add anything to the previous generation console versions. It’s a fairly up to date patch, so there are a ton of items that weren’t in the vanilla console version from a couple of years back and so I’m enjoying exploring that aspect of it.

The PS4 doesn’t add much to the formula though. The worlds are bigger (although I prefer to play in the smallest world) but I can’t claim the graphics seem any better. You can zoom out for a better look at your surroundings and the PS4’s higher resolution graphics help a little here but it doesn’t make a huge difference. The Dual Shock 4’s touch pad is used to pinch zoom the display (although oddly not on the map screen) and they are planning a mobile app to act as a map screen also but in terms of next-gen innovations, Terraria is somewhat lacking. 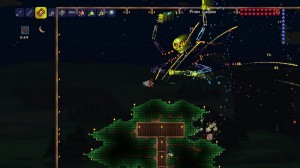 The fact is, this is just Terraria and if you’ve got the PS3/Vita version you probably don’t need this version but buying the PS4 version gets you those versions (but not vice versa) and there is cross-save functionality. If you’re new to Terraria then I can recommend this, especially if you’ve spent time with Minecraft and want something similar.

With more bosses and items than ever before, Terraria on any console right now is a great game. Behind it’s retro look, and obvious Minecraft elements, this is a complex and powerfully addictive game that is also a great way to chill out too.

Terraria
8 Overall
Pros
+ It's just Terraria but that makes it one of the best, most addictive games out there. + Hundreds of hours of gameplay if you decide to stick with it. + Loads of new items if you've not played Terraria for a year or two. + Cross-save and (one-way) cross-buy. + Biggest worlds yet for console players.
Cons
- Not much evidence of the power of the PS4. - Trophies are even harder than they first were because of the patches. - Not cross-buy for existing Vita/PS3 owners.
Summary
Terraria won't show off your PS4's capabilities to the max but it offers many hours of creative fun and adventuring for those of you with lifetime to burn.