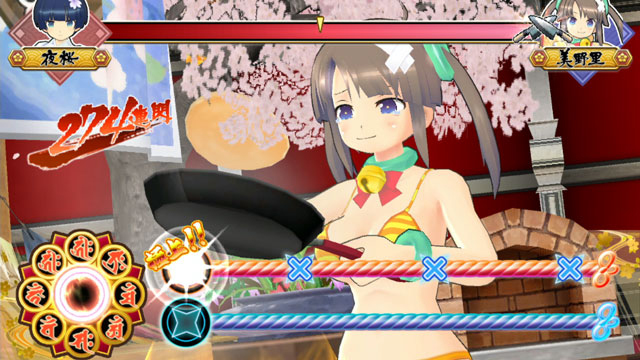 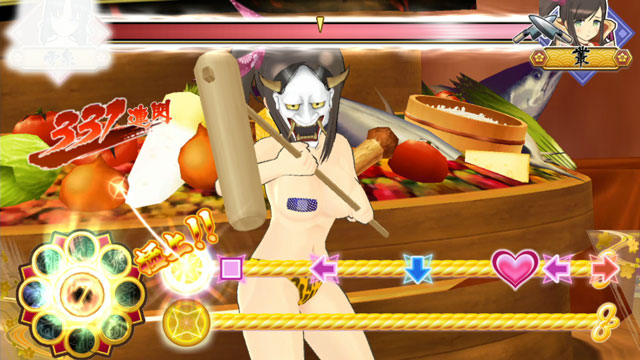 It’s time to enter the wacky world of Senran Kagura again but this time instead of fighting with swords and fists, you’re fighting with sushi and noodles.  Yes its Senran Kagura Bon Appétit and the game answers the often asked question of what would happen if you crossed boobs, ninjas and a cooking competition together.  The answer turns out to be a rhythm action cooking game where you play busty ninjas cooking in a head to head battle to make the dish possible.  Of course this being Senran Kagura you get to lose your clothes in the process.

The four schools from Shinovi Versus are present here and each girl has their own story to follow through.  However at the beginning of the game you can only chose between two of the schools as Gessen and Hebijo are locked behind paid for DLC.  This is a reeks of greed as the intro movie, character selection screen and high score screen all show the missing characters.  The full game should clearly encompass all four schools from the start.

The choice to restrict half of the girls is an odd one too, as if you’ve got Shinovi Versus then the DLC characters and costumes purchased previously can carry over to this game.  The choice to restrict effectively half of the game feels at odds with this cross DLC ability, and feels very cynical.  Playing with just the default two schools you can’t help but feel a little cheated, as you feel like you’re missing half the game. 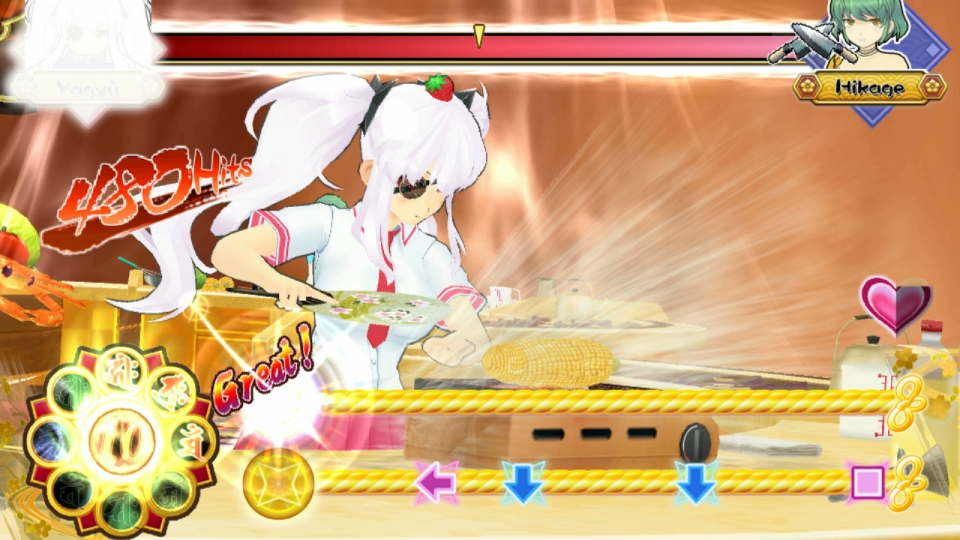 Each stage of the game is split into three sections each representing a new dish, after each dish the judge will taste your food and choose a victor.  After tasting each did the judge declares his favourite by spewing forth light out of his eyes and mouth which rips apart the clothes of the loser.  If you perfectly win each round your opponent will be stripped totally nude and end up covered in whipped cream lounging on a bed of fruit.  At this stage you’ll have the ability to view them from any angle and zoom in on the interesting bits.  If this kind of stuff happened on Master Chef the contestants would be livid.

The music tracks in this game are all cut from the same cloth and are very Japanese.  Each girl has their own song, and meal, and in total you’re looking at ten songs from day one, which will expand to over twenty should you purchase the DLC schools.  Whilst they all sound very different, they also have the knack of being instantly forgettable.  There are only handfuls which carry lyrics as most of them are just instrumental pieces.  The variety you found in games such as Gitaroo Man and PaRappa just isn’t on display here.  The difficult is also very up and down, with some of the songs proving to be near impossible on the harder settings.  But this is a criticism which can be levelled at many rhythm action games.

Outside of the cooking you get to play with your girls in the dressing room, which this time has added boob control.  You also get to ogle your girls in full screen mode and view the whipped cream from any angle you choose.   Rounding off the package there is an arcade mode which allows you to upload your high scores to a leaderboad, and a freeplay mode where you can challenge whichever girl you want.

Overall then this is an amusing diversion for the girls from Senran Kagura, a totally different genre which retains the playfulness and fun of the main games.  As a companion piece to the Senran Kagura Shinovi Versus it works very well, however when it comes down to it the music featured in the game is forgettable and the decision to lock away half of the game via DLC is unforgivable.  One to recommend only if you can’t get enough of Senran Kagura.

Senran Kagura Bon Appétit
7 Overall
Pros
+ Refreshingly silly premise
+ Easy to pick up and play
Cons
– Poor decision to lock away half of the cast as DLC
- The songs never really rise above standard J-pop fair
- You need crazy super powers to beat hard mode
Summary
Senran Kagura gets even stranger with a food inspired rhythm action game. Whilst part of the game is locked away behind paid DLC, what is there is fun and full of food based fan service.