Pocoyo Party is the first game based on the endearing Spanish kids show from Zinkia Entertainment. At least that’s what the text on the PS4 dashboard says. It’s educational, fun for all the family and MULTIPLAYER! That’s verbatim in case you were wondering. However, firstly this is in fact the third Pocoyo game after previous efforts on the DS in 2008 and DS/Wii in 2011, being Hello Pocoyo and Pocoyo Racing respectively.

Secondly, all but one of the game modes are playable with extra players, notably racing supports four players. The only mode that doesn’t support multiplayer is the block building  minigame, though we’ll explain why later. 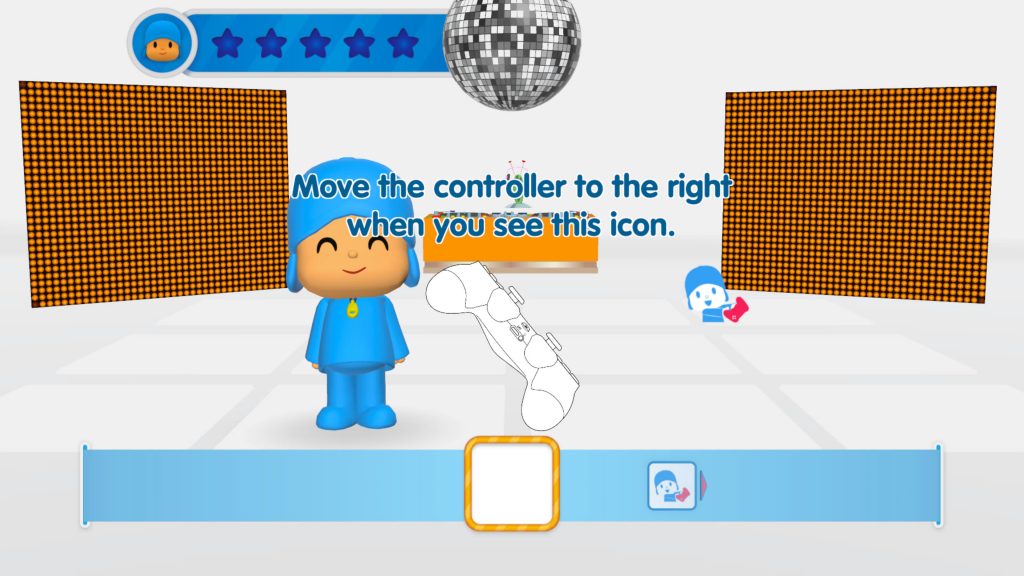 For those unfamiliar with Pocoyo, it is a delightfully surreal CGI cartoon featuring the titular character, Elly the… elephant, Pato the duck and Nina the girl. Narrated on UK television by Stephen Fry and latterly Stephen Hughes, the voiceover is all part of the charm. It airs on Channel 5 in the UK during the kid’s Milkshake slot in the mornings, as well as on CITV and features Pocoyo and his mates getting up to shenanigans. It’s all very safe and kid friendly, though quite why you’d expect anything different we don’t know.

For no other particular reason than he’s pissed off, a peripheral character, the angry alien has stolen invitations to Pocoyo’s party. This sets up, for no particular reason, a series of minigames. We say a series. There’s six. A massive value package this ain’t on the face of it. But for those of you with a kid in the target demographic, that being three to six year olds, this is probably worth considering. 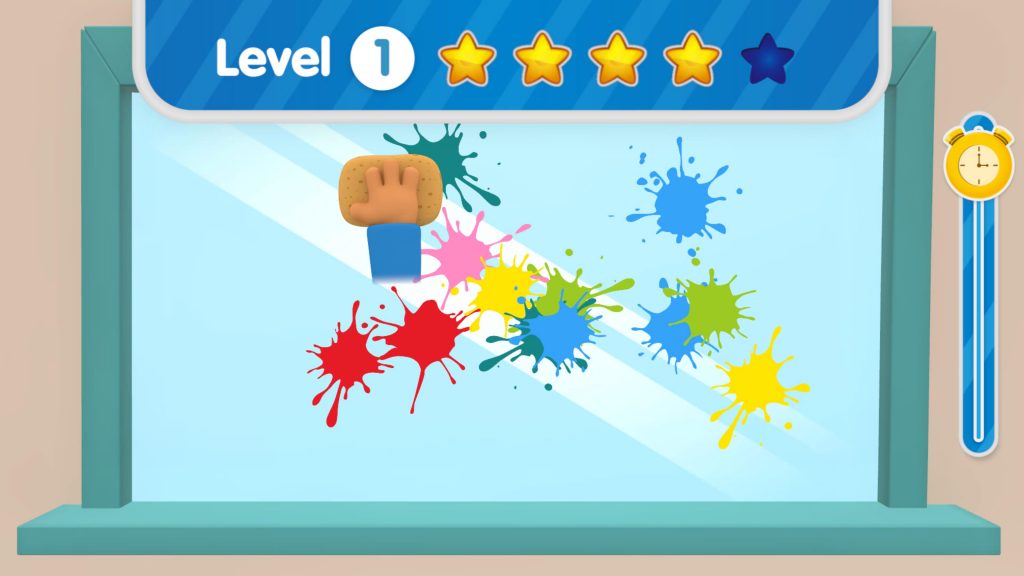 The first minigame is a simplified take on Dance Dance Revolution. You’re encouraged to use the tilt function of the DS4 controller, though you can just as easily use the d-pad if you so wish. Pocoyo will bust moves in an amusing fashion across eight degrees of difficulty. It’s not too challenging anyway, but most importantly it’s fun. Even as a jaded older father.

The second is racing, such as it is. You don’t have any control over your vehicle other than releasing the accelerator to avoid periodic obstacles set around the respective courses. This is the runt of the litter as you will progress to the next event regardless of your finishing position. You could play four player races, but there’s little point. 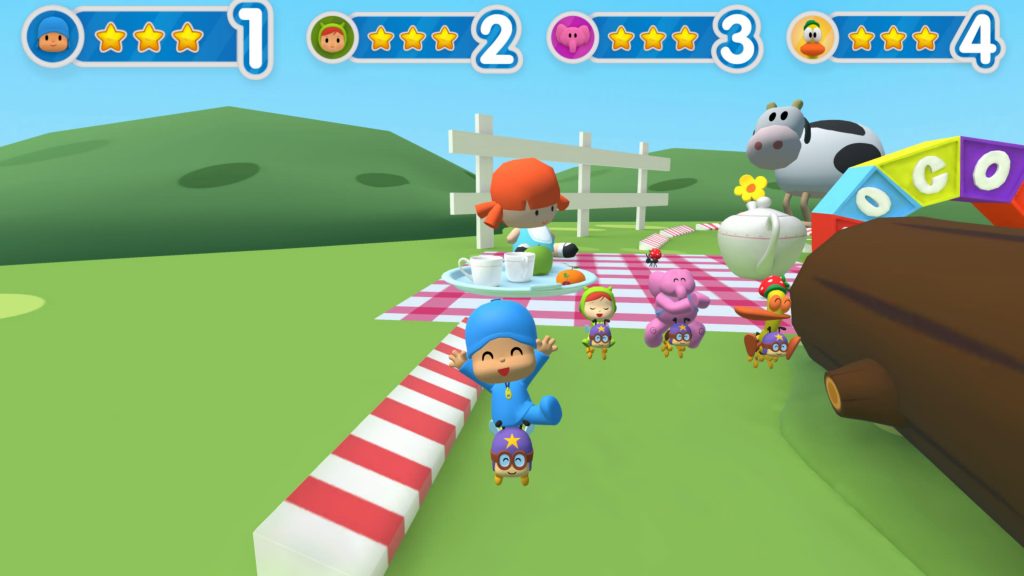 Next is you getting your George Formby on and cleaning windows of paint splatters. This uses the tilt to great effect and is a lightly challenging diversion in which you unveil items hidden behind the window. Unlike the slightly erratic implementation in the dancing mode, the tilt function is a great fit.

The fourth mode is fishing which actually requires a modicum of skill to proceed. You need to time your tilt in the opposite direction in good time to retrieve the item you’ve hauled from the depths, typically letters, toys or fruit.

The penultimate mode is building towers with building blocks and subsequently smashing them down again. We recall our own kid having more fun smashing his towers up than building them, we expect your kids to do the same with this. The nature of the mode doesn’t really lend itself to multiple players, though swapping the controller is just as viable we guess. 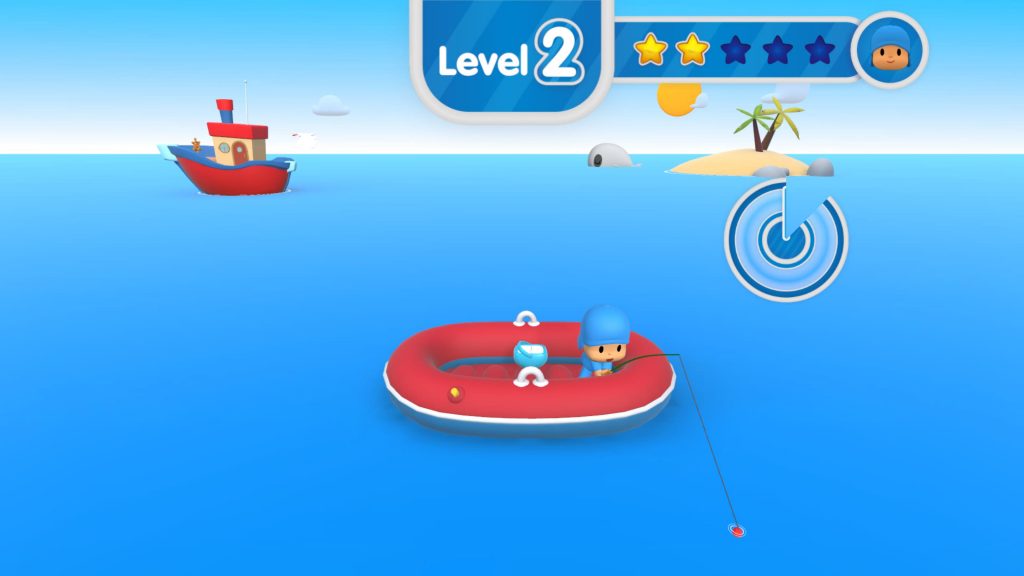 Finally you have the photo game, not dissimilar to one of the minigames on our favourite DS title Rhythm Paradise in terms of the timing and framing of your subjects. It’s a little reminiscent of Pokémon Snap too we guess, but only superficially. Your camera is strictly fixed rather than on rails. As long as you snap your subject in the fairly generous frames, you’ll pass. 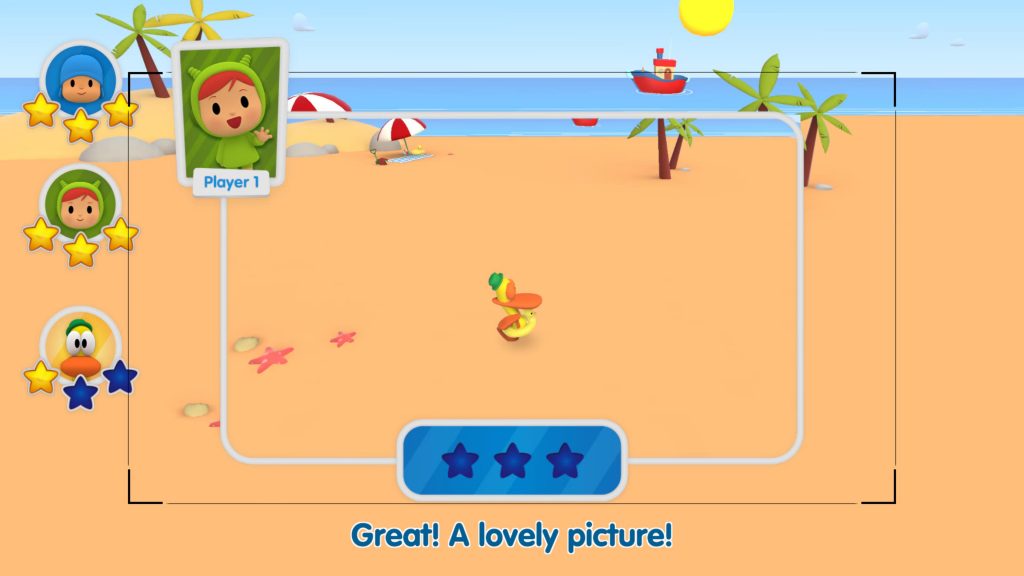 Ultimately this is a game for young kids. We’d hesitate to recommend it to anyone with a kid at infant school or older, but if they have a younger sibling this would be perfect to while away a rainy afternoon or as a reward for tidying their room or something.  The music by Daniel Heredero is just as in the show, just as the assets are exactly as used, so your kid is bound to be amused. The only thing we found let the side down a bit was the lack of variety beyond the six modes on offer. 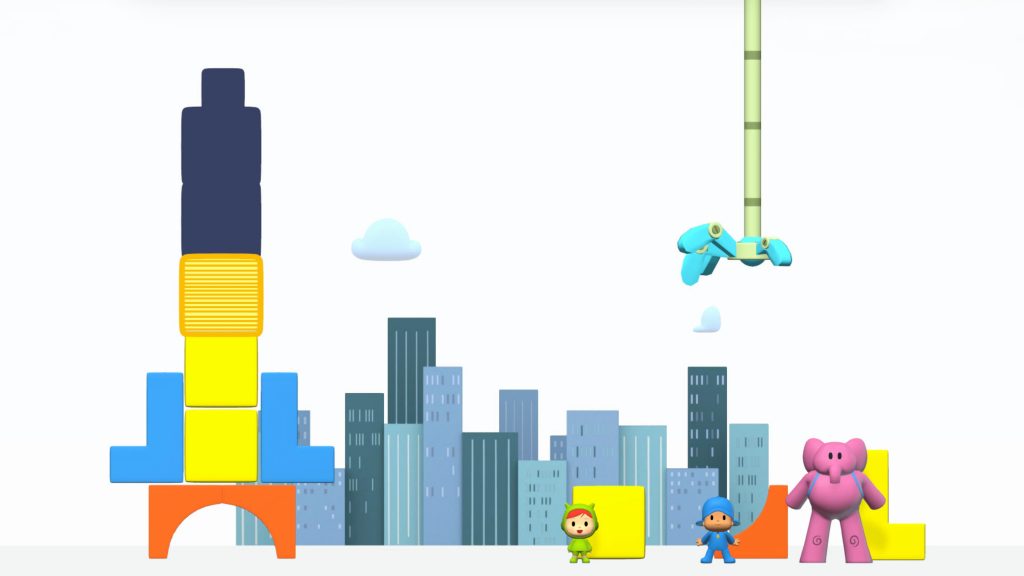 The unlockables are generous enough with eight full length episodes on offer as well as a sticker album and jigsaws to unlock. The jigsaws are laughably easy, even for a kid. Also the titles for some of the unlockable episodes don’t match up with the video as played.

The fact that Pocoyo Party uses the DS4 tilt functions at all is significant, it’s a great tactile learning experience for younger kids into the bargain. Barring the fact it lapses into repetition a bit too quickly, this is a good effort for a kids game. Learning by stealth is to be expected and Pocoyo Party does a fair job of making it fun.

Pocoyo Party is a fun game aimed very much at the younger audience, let down slightly by the relative paucity of the minigames on offer. What there is though, is generally well done with a fair haul of unlockables to keep your kid amused. Use of the original TV programme assets is a definite help in terms of replicating the feeling of playing an actual Pocoyo episode.

Pocoyo Party
7 Overall
Pros
+ Replicates the feel of the TV show well due to original graphical and musical assets being used
+ Actually uses the tilt and movement functions of Dualshock 4
+ Delightfully daft and generally fun minigames on offer
+ Unlockables are generous enough, though jigsaws are absurdly easy, even for a kid
Cons
- Only six minigames is a bit sparse on the face of it
- Lapses into repetition a little too quickly
- Racing mode is the only four player option, but it's barely a game
- Mismatch between some of the titled episodes and that which are actually shown

Summary
Pocoyo Party is a fun game for those with younger kids in their household, replicating the look and feel of the TV show well. Notably it uses the DS4 tilt functions to great effect, which is more than we can say for 99% of PS4 games.