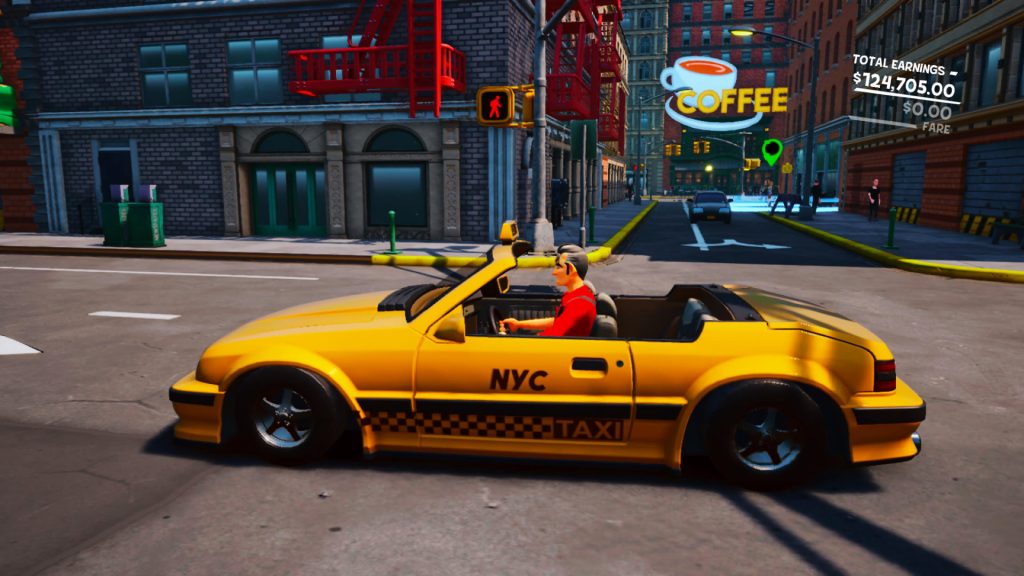 It may be the nostalgia talking, but what would be the first thing you think of when reading or hearing the pop-punk warcry of “YA YA YA YA YA”? Chances are, you either have no idea what I am talking about and are too young to remember it. That or you are picturing a blue skied San Francisco strip, chaotic vehicular shenanigans and a bright yellow taxi shooting down a street with a manic announcer beckoning you to make some crazy money. I’m talking of course, about Crazy Taxi, the classic Naomi Arcade cabinet from the late 90’s that combined dangerous vehicular stunts, high octane pop-punk of the era and Sega’s devotion to setting everything under a trademark sunny sky.

It’s hard not to look at the stylish simplicity of the game with a degree of fondness but let’s take away those rose-tinted specs for a moment and understand something. Much like most of Sega’s output of the era, Crazy Taxi was a sum of parts. Take away any single element from its formula and you would be left with a much lesser experience. This was perfectly evidenced with the rereleases of the game on PSN, Xbox Live and PC when The Offspring, Bad Religion and real-world locations were removed from the game. Suddenly, this novel and oh-so morish experience became a bit of a shell of its former self, losing its familiarity and energy with such a small step. Without these crucial ingredients that made the meal, everything just fell a bit flat. 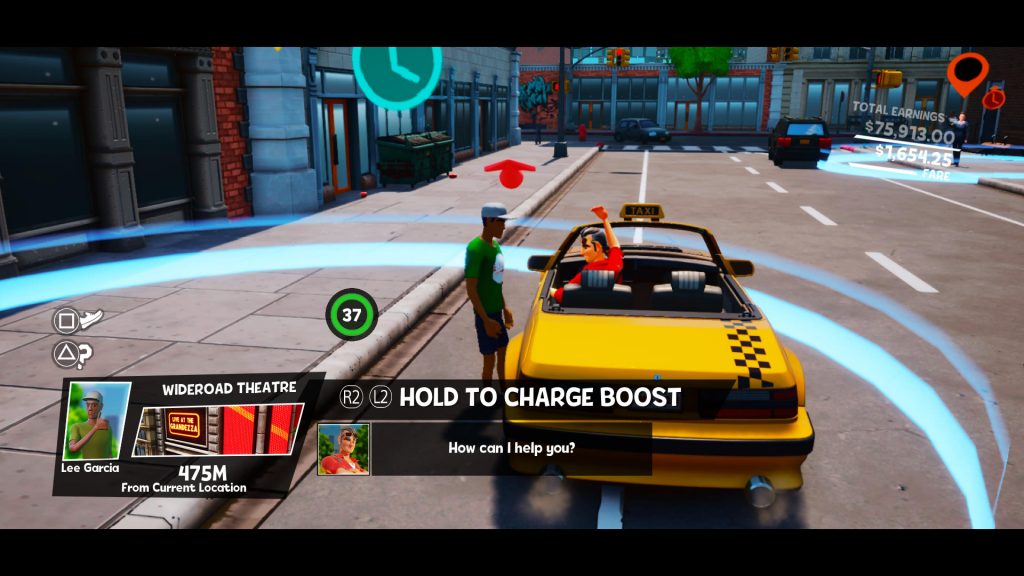 Now why is this important when discussing a different game? One that should be judged on its own merits and not simply compared with a game that released twenty two years ago, a game that has had the benefit of decades of well-earned nostalgia that newcomer Taxi Chaos hasn’t had the same luxury of having? The answer to this is simple. Taxi Chaos isn’t some homage or tribute to what has come before, it is an out and out recreation of that recipe, but instead of just being new or updated, it devolves from that formula more than it iterates. Repackaging the gameplay, the look and the sound but eschewing everything that made the Sega game a classic.

Taxi Chaos takes place on the streets of NYC, but not the NYC that you are thinking of. Instead, this is a place called New Yellow City, a pastiche of the other NYC, but condensed down to the size of a few blocks to drive around in. You play as one of two cabbies as they go about earning a living by picking up people off the street and driving them to their chosen destination in the fastest time possible. This is all in aid of gaining cash (which acts as your score) and moving on to picking up more passengers to keep things going. There are three modes to play around in, Arcade mode is the classic taxi mode, where you race against time to make as much money as possible, with time extensions given for faster drop-offs and pick-ups. Pro mode is essentially the same, but instead of a handy GPS arrow on the top of the screen, you must remember where each landmark is. Lastly, there is a free mode which acts as a practice mode for driving skills, collectible hunting or learning NYC inside/out before testing skills in the arcade or pro modes. 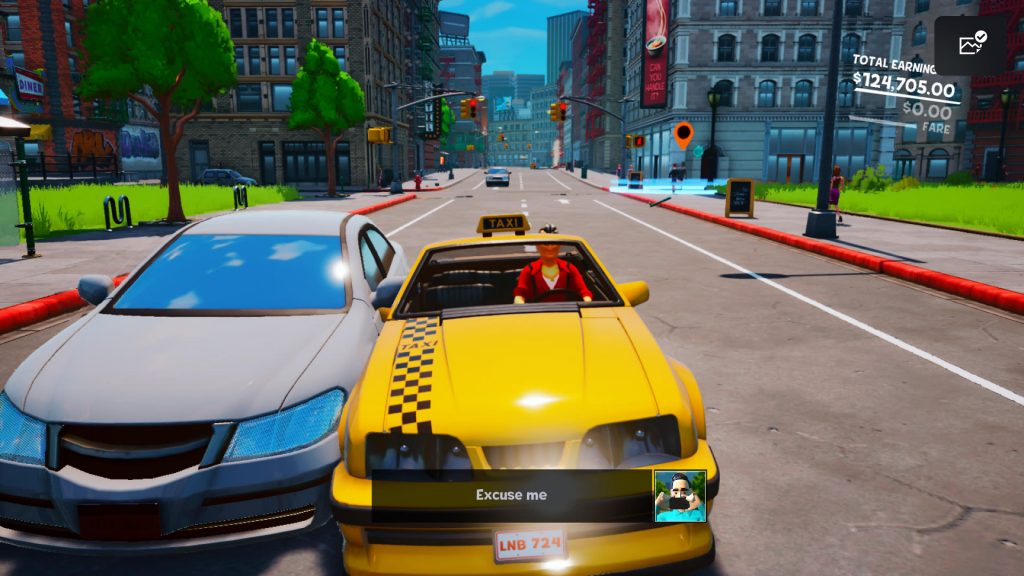 Of course, if you have played Crazy Taxi before, then you know exactly how to handle this. There is little to no divergence apart from the missions that happen when you pick up special passengers. These amount to little more than icons to drive through, however. The driving feels fine enough when it comes to the steering, but what would be immediately jarring to a veteran is just how slow everything feels compare to the heavy, drift heavy movement of the classic game. Your taxi’s movement lacks any energy and instead just feels like a go-kart when the game’s name implies that there should be chaos.

This Sunday driving speed is not helped by the accompanying factors. Another way to earn cash is to impress your passengers with how you handle traffic on the road and performing dangerous stunts, but your opportunities to do so are very limited and not always worth the effort. Weaving through traffic and gaining near miss bonuses should be more fun and more reliable than it is, however with some poor trigger detection, these do not always yield the results you may be aiming for. It’s also not entirely clear on what constitutes a shortcut or not. In some cases, I was bunny hopping from rooftop to rooftop with a passenger in tow, but the score multiplier just sat stationary, not at all impressed by my spider-cab antics. 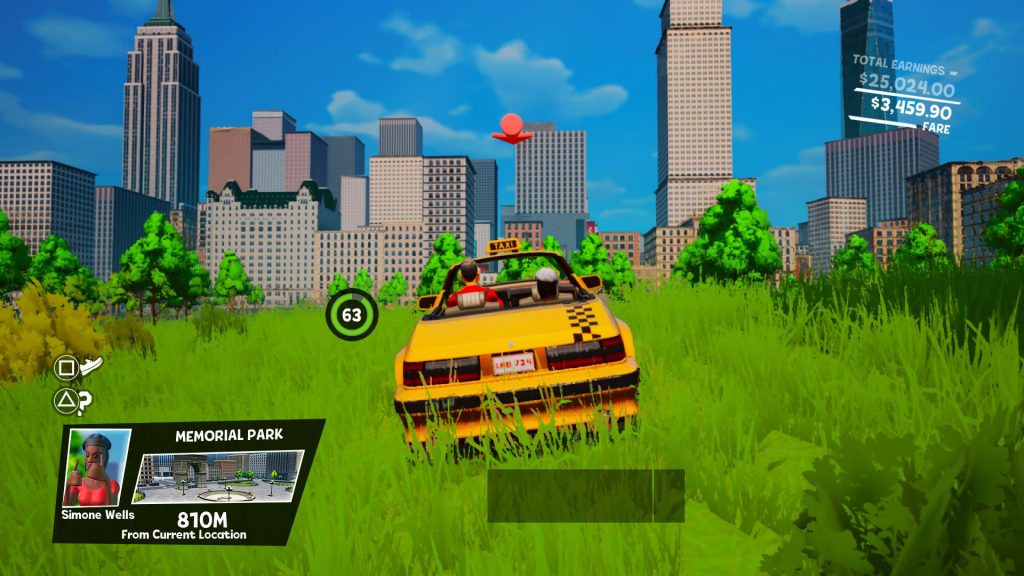 The real issue with all of this is that the act of picking up and dropping off has been turned into a borderline mundane experience. I can’t blame the developers for this one necessarily, as even in Crazy Taxi, passengers weren’t exactly a major feature here either. However, this is where Lion Castle Games have doubled down on mediocrity. Instead of making these people vessels for high-scores, the developers saw fit to make each passenger have a line or two of dialogue, which may not seem so bad at first, but is when you realise that in a single Arcade session it is entirely possible to pick up multiple passengers with different voices but the same things to say each time. It feels like the game would have been genuinely better if the passengers did not talk, as it would not highlight just how repetitive and mundane everything feels. The only time I laughed was when the game openly referenced the fact that the passenger models were repeating, as if taking note of this quirk makes it okay.

This sense of blandness and mundanity makes its way into the overall presentation. For a late stage PS4 title, this game can be ugly to look at. This is not in the case of the environment or taxi models. Instead, I mean that the graphics look blurry overall, creating a jarring sense of movement when steering the taxi around corners. This is far from what I would expect on the PS4, but when playing on a PS5 that can brute force a clearer picture/ frame rate, it’s just dreadful to look at as a result. Last, but certainly not least is the soundtrack. Now, it would be unfair to assume that Lion Castle would be ringing up the Offspring to get some tracks in to borrow on that nostalgia a bit more, but I certainly would have expected better than the generic, non-vocal guitar riffs that play in the background throughout. Much like with the driving mechanics, the passengers and presentation, there is nothing energetic of worth getting excited over. It’s just a bland waste. 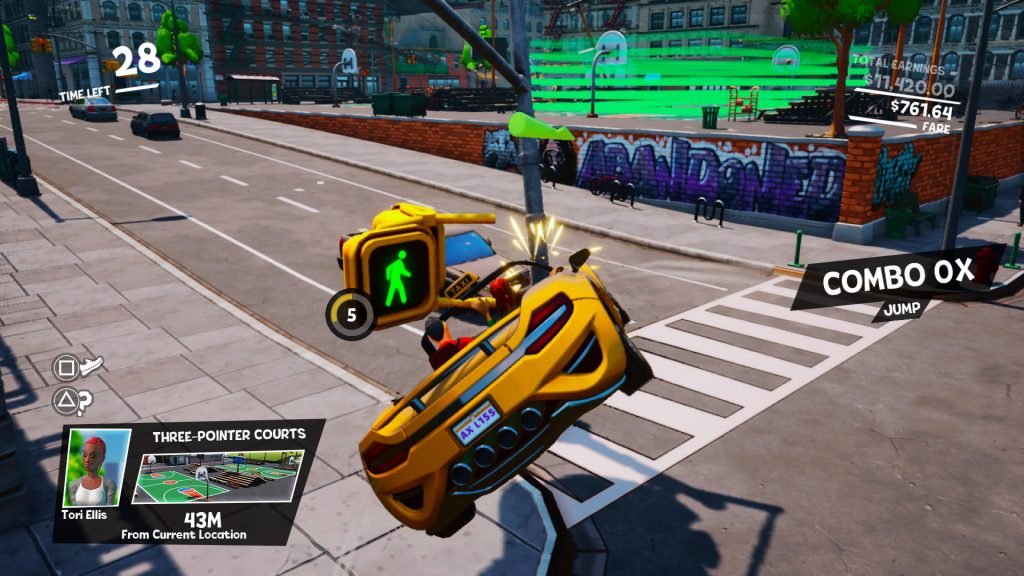 While I can’t blame any developer for looking at Sega and thinking ‘if you aren’t going release it, then I will’ with games like Crazy Taxi. However, if you’re not going to at least try and emulate the elements that made the game what it was then it isn’t worth bothering. Taxi Chaos is less like Crazy Taxi and instead becomes Lazy Taxi, a poor facsimile of a classic, unique formula that mimics everything from the twenty-two-year-old franchise, barring everything that made it fun in the first place.

Taxi Chaos
3 Overall
Pros
+ If you have spotify, then you can put the Crazy Taxi soundtrack on in the background and have a marginally better time
+ Responsive steering
+ It got Sega talking about Crazy Taxi for the first time in what seems forever
Cons
- Horribly bland characterisation, especially the inane dialogue between driver and passenger
- Far too slow to be considered chaos
- Mimics everything from Crazy Taxi, barring everything that made it fun
- Bland, blurry presentation and generic music
Summary
Whether you have nostalgia for Sega’s Crazy Taxi franchise or not, Taxi Chaos by Lion Castle Entertainment is a hard sell. The game is a poor attempt at mimicking a classic IP in the hopes of bringing the formula to a new audience and fails to capitalise on any of the elements that made the original experience so fun to play in the first place. Taxi Chaos lacks any flair in the gameplay, visuals or audio department, while turning the once entertaining concept into an exercise in boredom.