Moose Life is the latest from Llamasoft AKA Jeff Minter, ungulate obsessed coder par excellence. This reviewer first got into Jeff’s work with the amazing Tempest 2000 on Jaguar, though no doubt some of PSC’s editorial guys of similar vintage hark back even further. The PS4 Llamasoft games have been a mixed bag with Tempest 4000 & Polybius coming in the last few years. Richie reviewed them both, though unlike Polybius, this doesn’t require VR.

Rather than the curved and circular tubes you’ve probably grown used to, Moose Life has almost gone back to basics. You see, Jeff has opted to go with two wide flat planes that you can flip in between. The store description saying it has been created in the style of an ’80s arcade game, and it is bang on. This gives a purity that was perhaps lacking from Tempest 4000, we found it helped us focus that bit more. 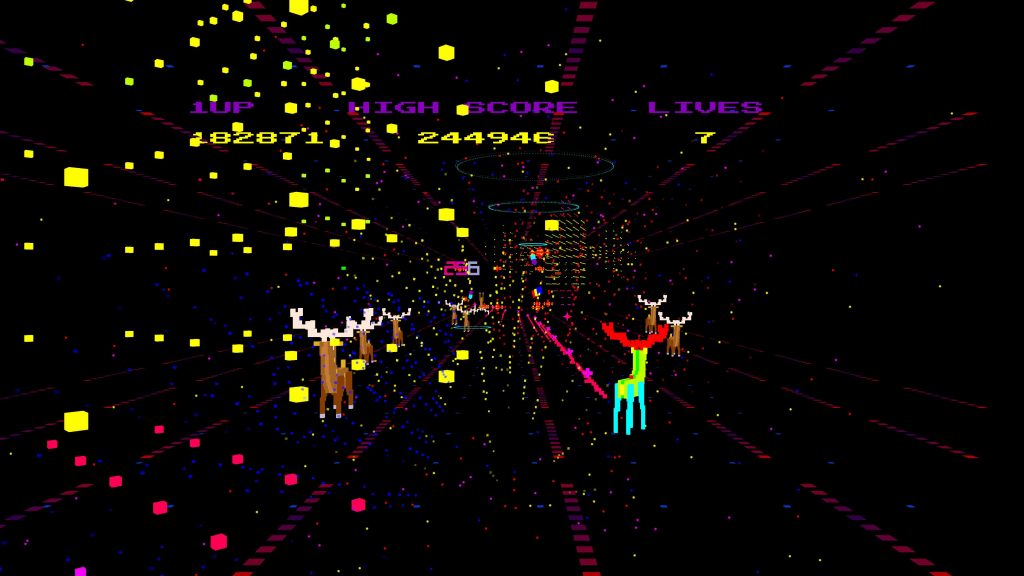 Moose Life goes in hard with the moose theme and this adds a delightfully bonkers layer of humour that Richie remarked was lacking is back in spades. It’s billed as a Super Moose Shooter with the aroma of a moose. Each of the levels also has a deer related gag into the bargain, starting out with ‘Cervus With A Smile’. To save you looking, that’s the genus of several deer species including the red deer and moose/elk.

OK, perhaps a little knowledge of Latin helps with some of the gags, such as they are. ‘You Can Get Anything You Want At Alces Restaurant’ made us smile far more than we expected, Alces being the moose. We have no idea how we knew that beforehand, but did. Blame our dad for that. The pop-culture reference from 1967 might sail wide for many too, but again, blame our dad. 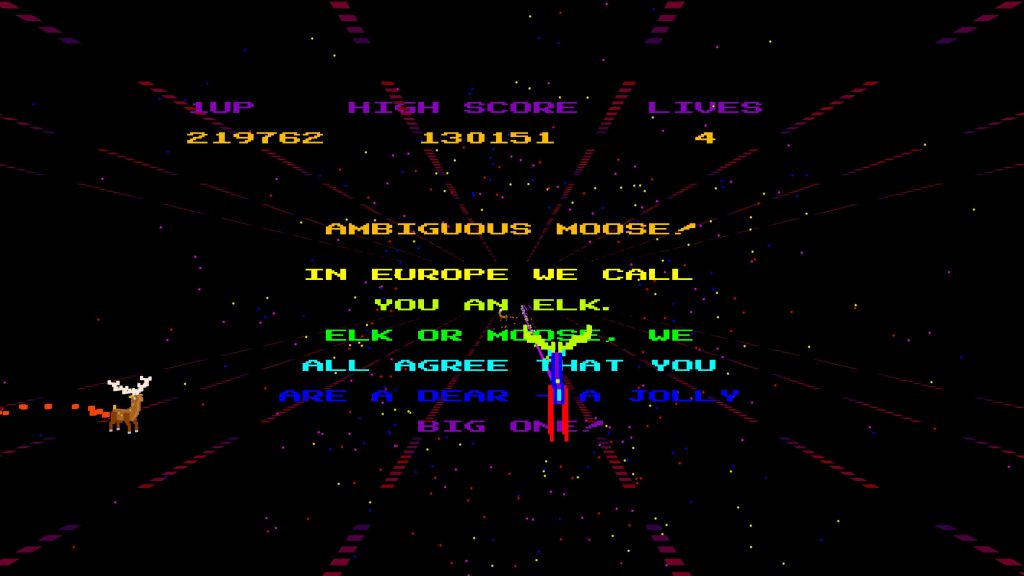 Practically you’ll shoot enemies in abundance. In doing so you’ll cause power pills to drop. The further you go, the trippier and more pyrotechnic the effects get upon popping one. Initially they start rudimentary, such as the smart bomb that destroys all visible enemies, or the helping hirsch pill. That gives you a deer companion that acts as a drone of sorts to kill a few enemies into the bargain.

Things get really fun when you pop a pill that turns any enemies you hit into deer that you can grow your herd with. Trust us, it makes perfect sense when you’re playing. There’s something deeply satisfying in growing your herd. If you’ve played previous Llamasoft games you’ll know that this is as much about the journey than anything else. A highscore is secondary as are trophies. For a site that reviews so many Ratalaika titles, that’s a nice feeling to have for once.

There’s three gameplay modes: standard, pure and free journey. The first has save states and lets you select and resume levels once you’ve reached them, the second starts you from the very first level and feels, to us, like the true way to play. Journey is just a trip you can do at your leisure, it’s all good. 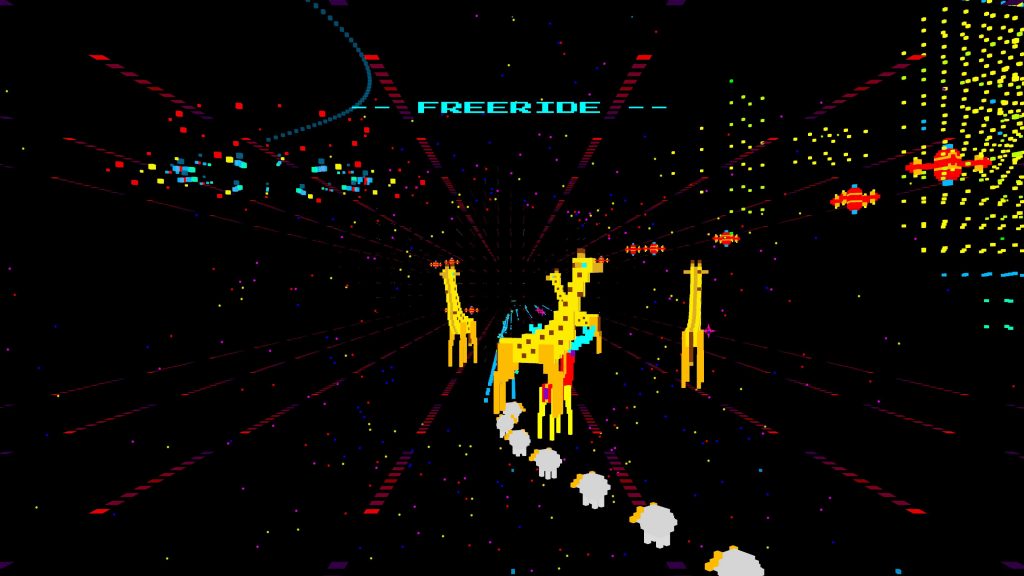 As with other Llamasoft games you can resume from any one of the fifty stages you’ve previously reached in prior games. The best thing is it retains your score at that point so you can literally carry on where you left off. Though one thing that became a problem for us was the paucity of lives as we made our attritional way to our eventual roadbump of level thirty five. You see, if you scrape through with nary a life in one level, you can find yourself being repeatedly on the ropes as you proceed. The key thing is to make sure your save state in each successive level retains as many lives as possible to stand a chance.

Your score is increased quickest by shooting a bouncing ball, a bit like that old Amiga tech demo from way back when. This releases a bunch of sheep, each of which bleats as you pick it up. Get them to the end of each level and your score will increase dramatically. They have the added bonus of acting as invincible bullet sponges into the bargain. 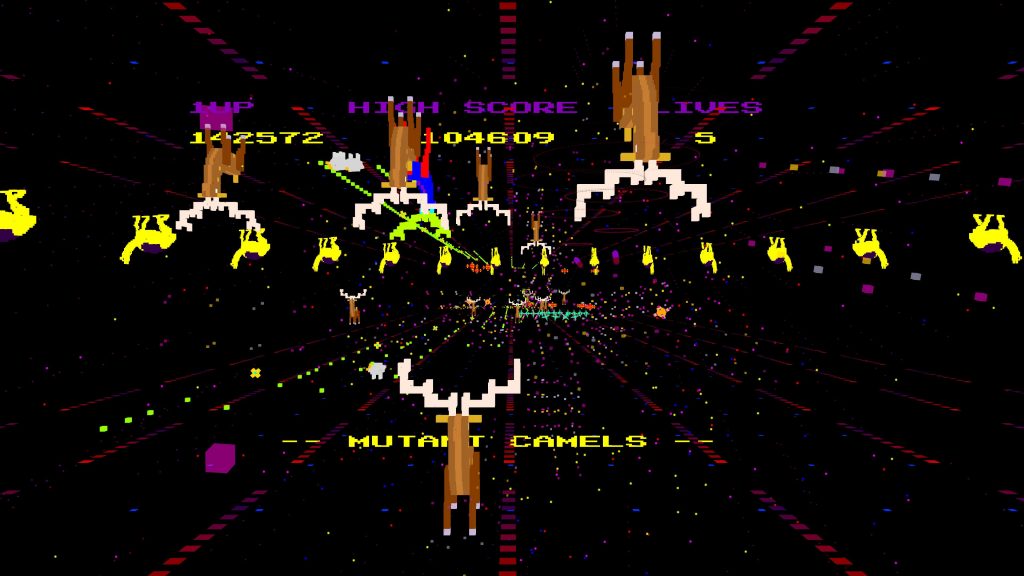 As well as sheep, there’s shoutouts to Llamasoft games of yore, Revenge of the Mutant Camels being one particularly obvious example. There’s giraffes too to name but a few other hoofed beasts.

Sound design is a particular highlight here, adding to the immersive nature of the game. As the levels get more frantic and frenetic, so do the sound effects as they grow to a crescendo. One effect that pricked up our ears (and had us searching for the vinyl on eBay) was from Stakker Humanoid. The music is very much in a similar style too, no bad thing for those old gits like us still gaming away. 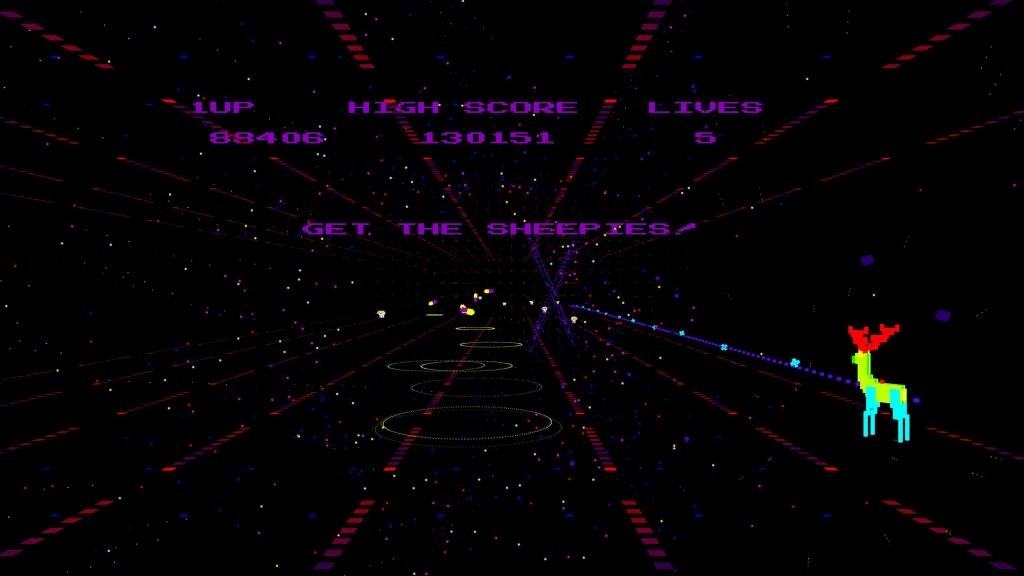 The obvious question to many is how it works outside of a VR environment. Heck, we initially thought it was a party we’d be excluded from due to not having a PSVR headset. We’re happy to report that it’s spectacular without the headset. Magnificent in fact. This is one game you have to see in motion, with screenshots barely doing it justice.

If we’ve any real criticism at all, it’s that once you get into a low-life situation as we did with a mere three lives on the level we mentioned a couple of paragraphs ago, if you lose the first life cheaply, you’re going to lose the rest of your lives in quick succession. 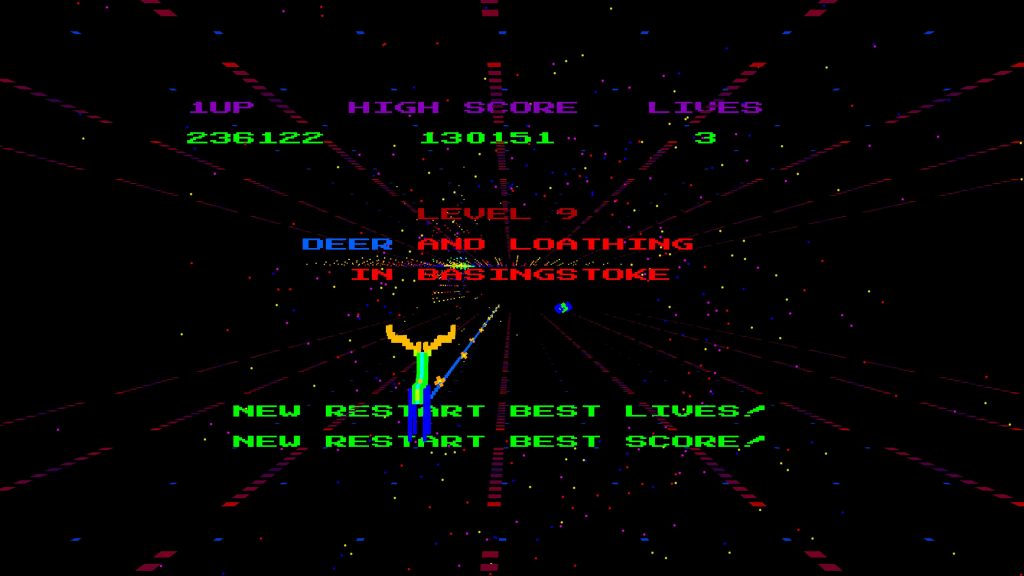 We could write and write about how much we enjoyed Moose Life though we remain mindful that the younger gamer might well see this and wonder what the fuss is about. Sure it’s self indulgent, but we’ll forgive Jeff his eccentricities when the gameplay is this fluid. Heck, what other shooter will mention Basingstoke? Bafflingly perhaps, but all part of the charm.

Moose Life is very much Jeff Minter doing what he does best, trippy shooters with inexorably advancing enemies and ever more elaborate light shows into the bargain. It’s why we love it, but we also concede it’s not going to be for everyone. Anyone else, put on some headphones and enjoy the ride.

Moose Life
8 Overall
Pros
+ A delightfully pure shooter with moose puns
+ When all the pyrotechnics kick in, truly spectacular
+ Excellent music and sound effects
+ Works just as well on a normal TV than VR
Cons
- You can get caught in a bit of a loop of shit if your save state is one with low lives
- Can be a little bewildering when everything is kicking off
- Maybe a little too basic in terms of the two flat planes you navigate
- Verges on the self-indulgent occasionally, that could be jarring for some
Summary
Lllamasoft's latest trippy lightshow Moose Life is an '80s style shooter with magnificent moose, deer, giraffes and Jarvis pixels a-plenty. Maybe not for everyone, but we loved it.