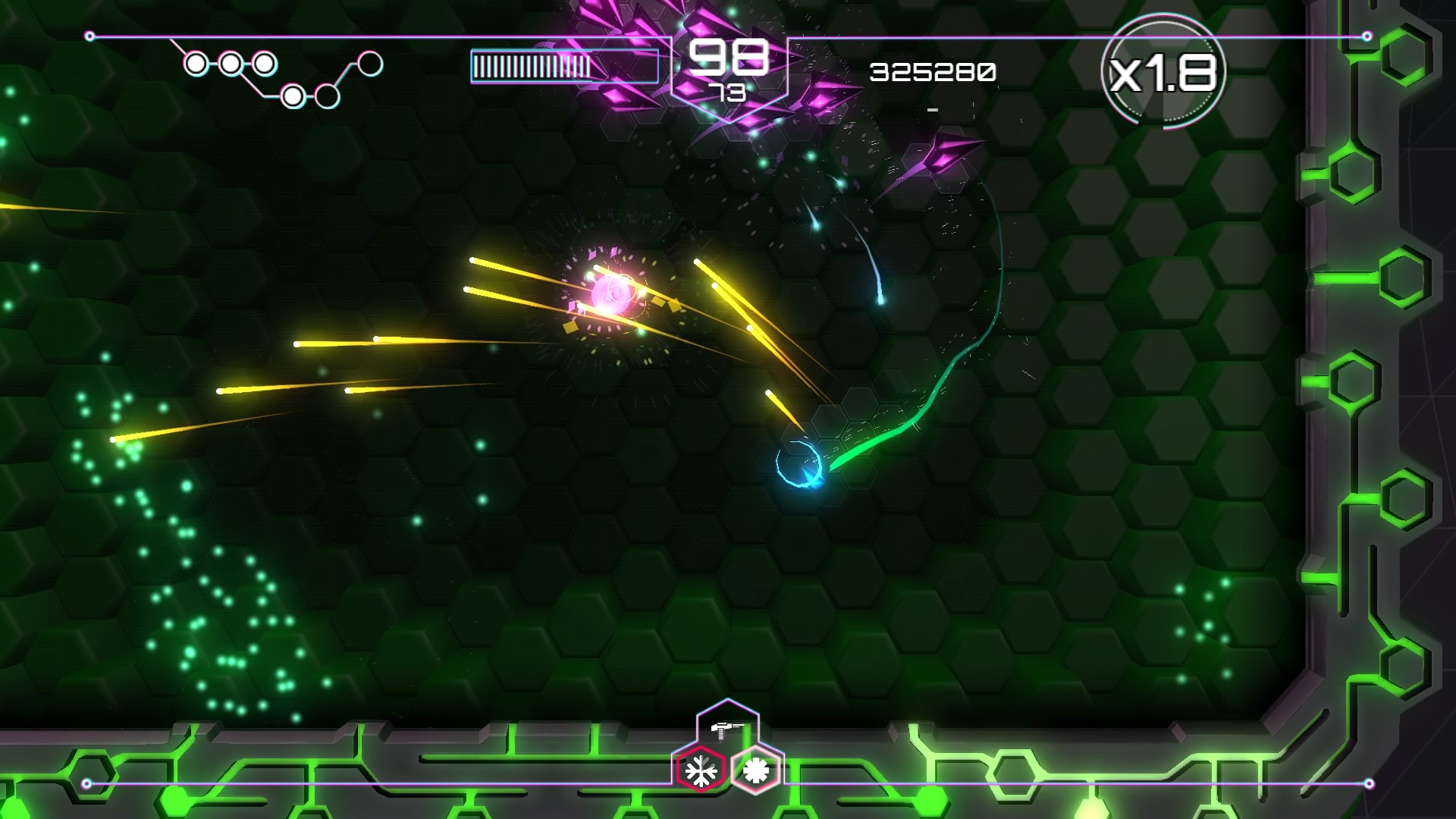 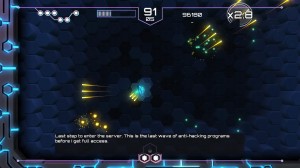 The twin-stick shooter is a mainstay of the digital download scene and while it is an almost populated genre, it’s safe to say that when you get past the best one, namely Geometry Wars 3, there is a serious drop off in quality until you get to absolute rubbish like Mastercube.

Tachyon Project is the latest entry into the genre (although it did debut on the Xbox One in the middle of last year) and thankfully it has learned a trick or two from the genre standout.

In fact, Tachyon Project is full of good ideas and design decisions, even if it does falter now and again.  Perhaps the oddest choice is to give the game a story and then feature instead of a default Arcade mode. 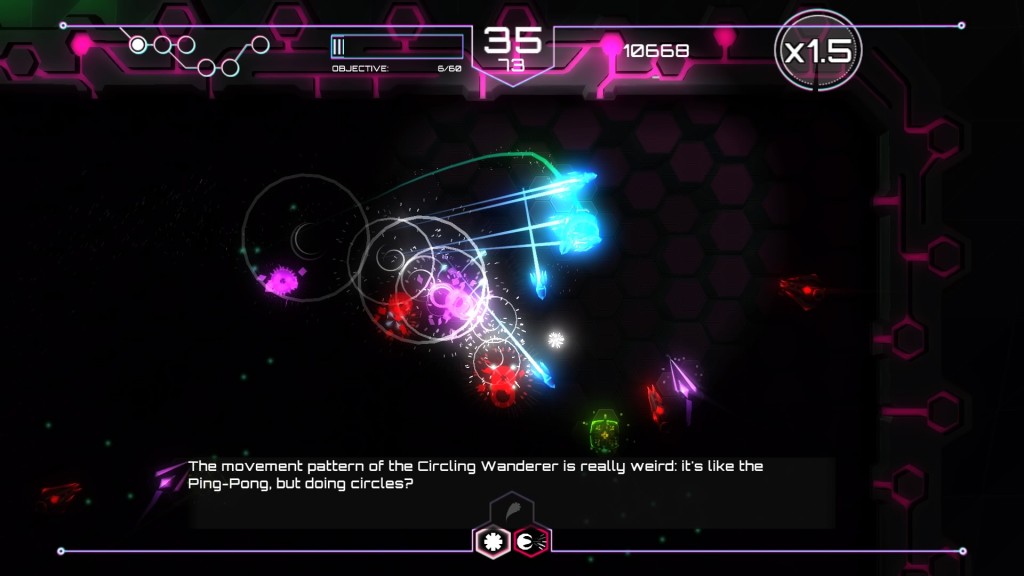 It tells the story of Ada, an artificial intelligence that is sent off to hack systems by its creators Helen and Halt, a couple of young hackers.  Hacking in this game essentially means ‘being a twin stick shooter’ and after a short tutorial and Ada’s first hack, Helen and Halt are captured which leads Ada on a quest to release them.

The game’s story is presented in comic frames and is the sort of thing people came up with in Matrix fan-fiction but it’s short and reasonably interesting.  The gameplay of the campaign is set across ten levels (each made up of multiple waves which act as checkpoints) which see you upgrading your weapons and defense systems while also introducing new enemies to you. 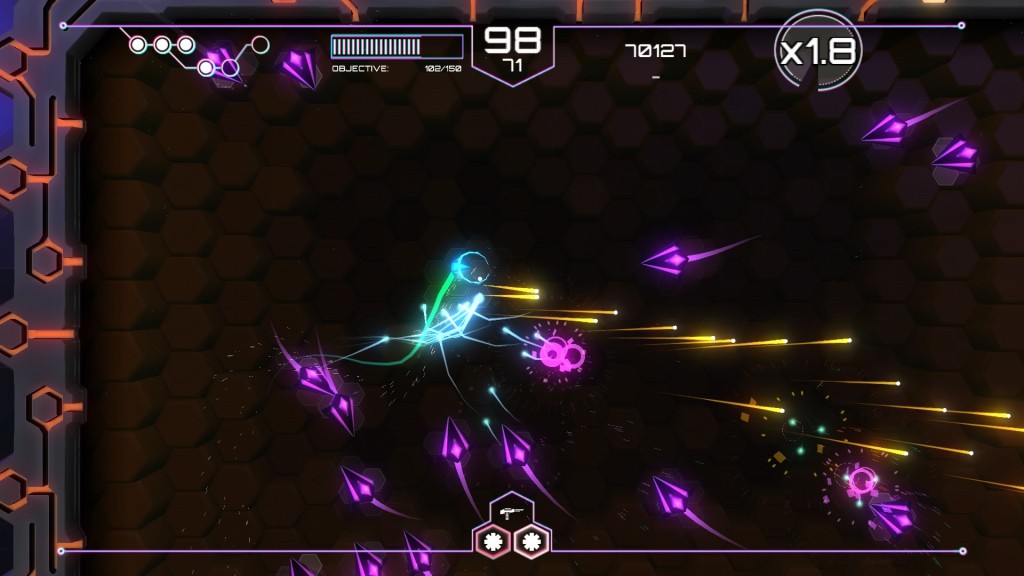 While this keeps things interesting, it does make the whole thing feel like an extended tutorial and the game does make the silly error of giving you the game’s best gun after your first upgrade but it’s fun to play around with the different weapons (and there are trophies attached to some of them too).

There aren’t many surprises in terms of enemies but when the game throws a large number of varied enemies at you it does get nicely intense. At times you just have to trust that the weapon you are equipped with can hold off the horde of evil shapes that are flying at you but the game does do a good job of making you powerful and the quick recharge rate of your secondary weapons means that you are able to deal a lot of damage per second. 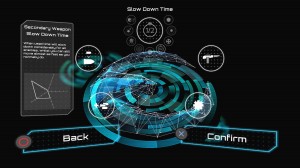 Visually the game isn’t bad. The arena feels pretty tight and your ship (well, AI hacker program) is a little larger than I’d like but the graphics never obscure the action and it all looks fairly decent. The sound is a let down though. The music is okay but needs to be a bit more bombastic but the sound effects are incredibly flat and weak.

Overall though, this maybe the best of the secondary pack of twin-stick shooters. It never reaches the heights of Geometry Wars 3, Resogun (if that counts) or even Super Stardust (which we’ve grown to like a bit more since we reviewed it) but is much better than the usual PSN shoot ’em up nonsense. If you’re a fan of the genre, this is definitely worth a look.