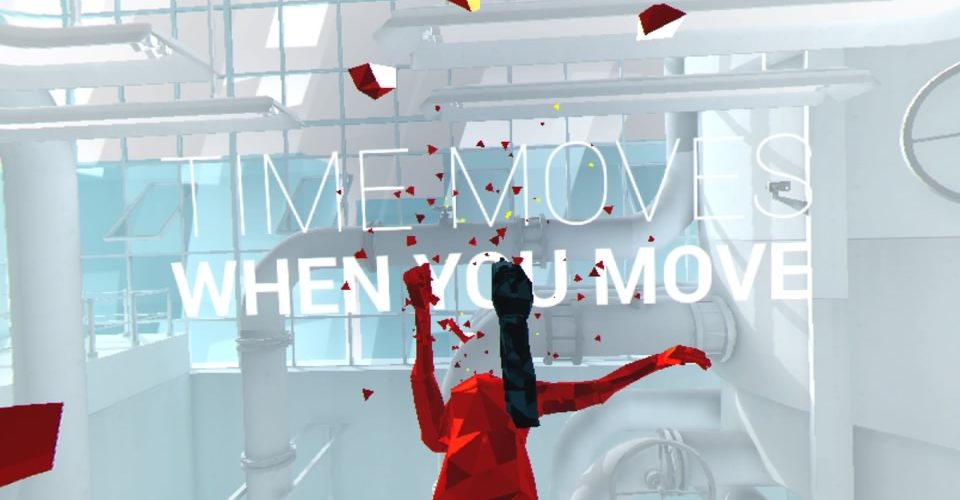 SUPERHOT made waves when it was released on PC over a year ago and with the emergence of VR a new version which took advantage of the technology was made. Now SUPERHOT VR has hit the PSVR and is certainly a unique addition to the ever growing library.

SUPERHOT has also been released on PS4 but that is not a simple non-VR version of this. They share the same style and mechanic but each plays to the strength of the format. Whereas you can move freely like a first person shooter in the standard version the VR version has you in one spot and the enemies come to you. 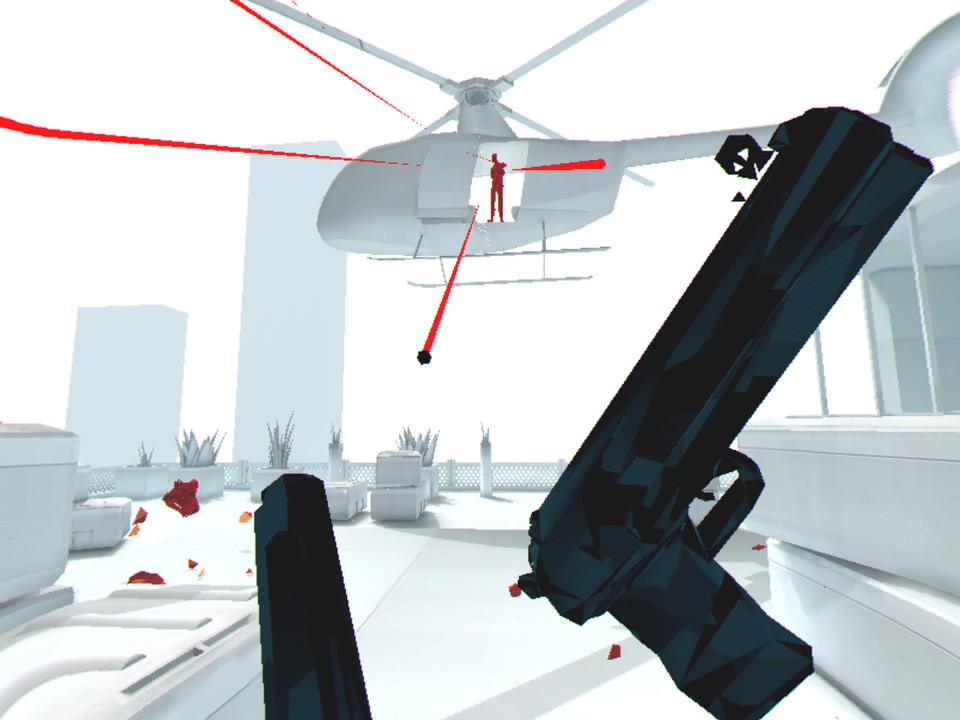 As well as the style of a plain white world with red, crystal looking enemies running at you, the main thread that links the two games is that time only moves when you do, so you can assess a situation before making your move.

In VR terms that means you have a Move controller in each hand so any movements of your head or arms are tracked and move time forward. You spawn in an empty room with something to grab in front of you. Picking this item up, whether it’s a gun, knife or whatever makes the level form around you and then it’s up to you to survive and/or defeat all the enemies coming for you. A quick look around may show you a complete armoury at your disposal, from pistols, uzis and shotguns to throwing stars, machetes and axes or you may be stuck with a bottle, ashtray or even just your fists for company.

Enemies will come at you and they too will either be wielding guns or foolishly coming at you unarmed. Until later most levels feature only a few enemies and it’s up to you how you take them out. Pick up a bottle and throw it at the shotgun wielder? This will make the shotgun fly through the air towards you allowing you to catch it in mid air and take out the other assailants. Maybe you pick up a meat cleaver and use it to deflect the bullets before stealing a handgun out of the hands of someone who strays too close before laying waste. Ammo is limited so accuracy is necessary and efficiency required to take out enemies before they overwhelm you. 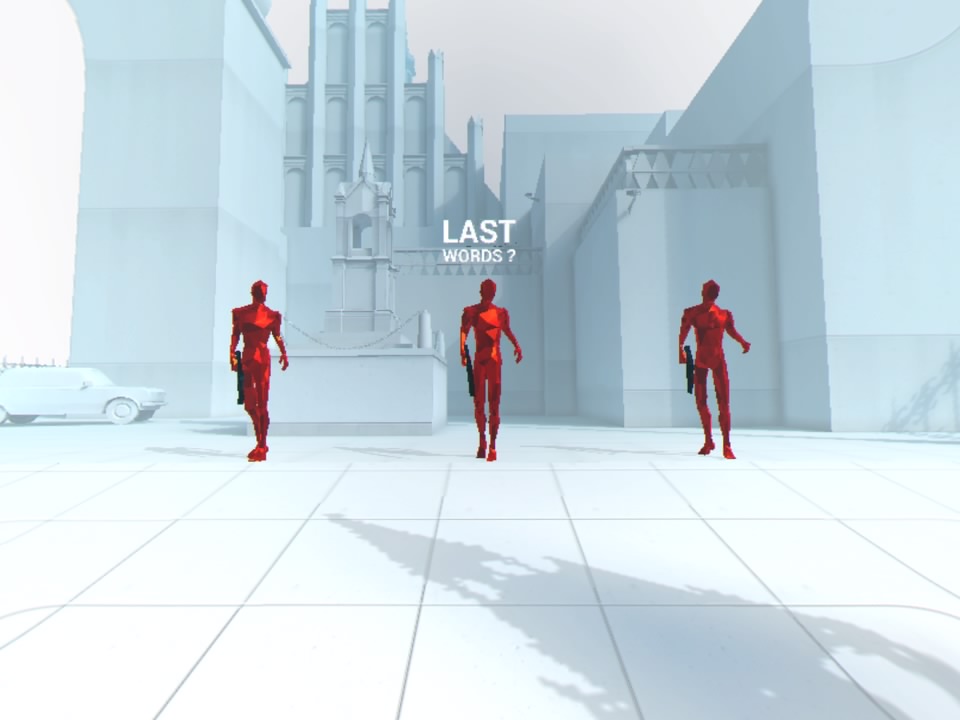 Finishing the scenario makes a pyramid appear in front of you which you can touch, this moves you to the next level which is usually in the same environment but from a different position. Here again you must quickly assess what tools you have and survive. You must do this about five times before the game says “SUPER.HOT. SUPER.HOT. SUPER.HOT” over and over until you touch the pyramid and initiate the next set of levels.

Dying at any point during those five stages sends you back to stage one, you have to complete each section in bulk before moving on. It’s not something that’s alien to me, reminding me of HoPiKo, but the repetition required to advance if you struggle on a stage may annoy some people. You probably will die semi-regularly as one hit to the head or torso will kill you and the enemies have no problem trying to flank you meaning if you miss a shot you may be in trouble.

Being VR though you have plenty of scope for dodging, with ducking, leaning and weaving all acceptable forms of evasion. SUPERHOT VR actually requires more room than your average PSVR game with me having to manipulate my setup to get a decent play session. I usually play VR games sitting down but when the game thinks you’re standing up reaching guns sat on the floor becomes impossible. Similarly enemies will attack you from left, right and above as well as straight in front so you’ll need full range of arm movement. Standing a decent distance from the camera so it can take all that in is a must whilst also being aware of your surroundings. 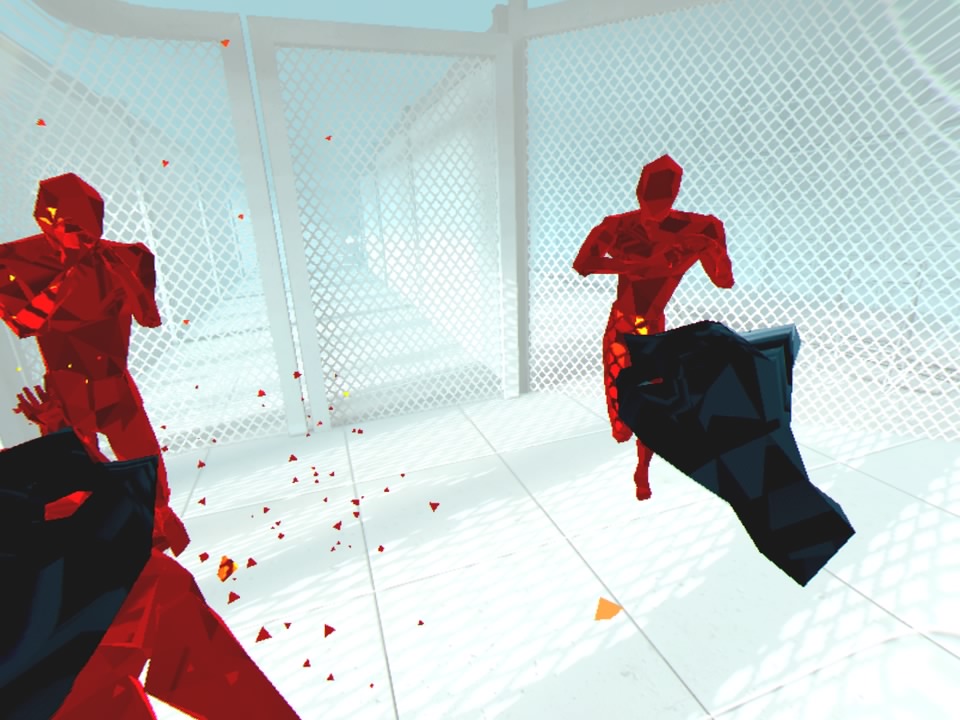 Even with all my efforts I never quite got a perfect play session out of it. Possibly as my arms passed between the headset and the camera as I aimed or some other issue my viewpoint would jump around, but more commonly my hands would just fly about the place, which when every movement is important isn’t great. I’ve had different issues with VR games in the past but nothing quite like this before.

It’s not game ruining by any means and more often than not it worked a treat but be aware that if you’re in a tight space then you may struggle to play this effectively. It’s also the VR game that has made me the sweatiest, with the amount of motion required, combined with this Summer weather and the VR headset generating a lot of heat.

Beating all the story levels will takes between two and three hours, depending on how stuck you get which for the price, though not for a VR game, seems a little on the short side. Upon completion however new challenge modes unlock which are a real test if you decide to take them on. There are survival modes which just spawn an infinite amount of enemies and it records how many you kill, a mode which challenges you to complete levels in a row without dying, a couple of speedrun modes based on real time and game time, a hardcore mode and a headshot only mode. 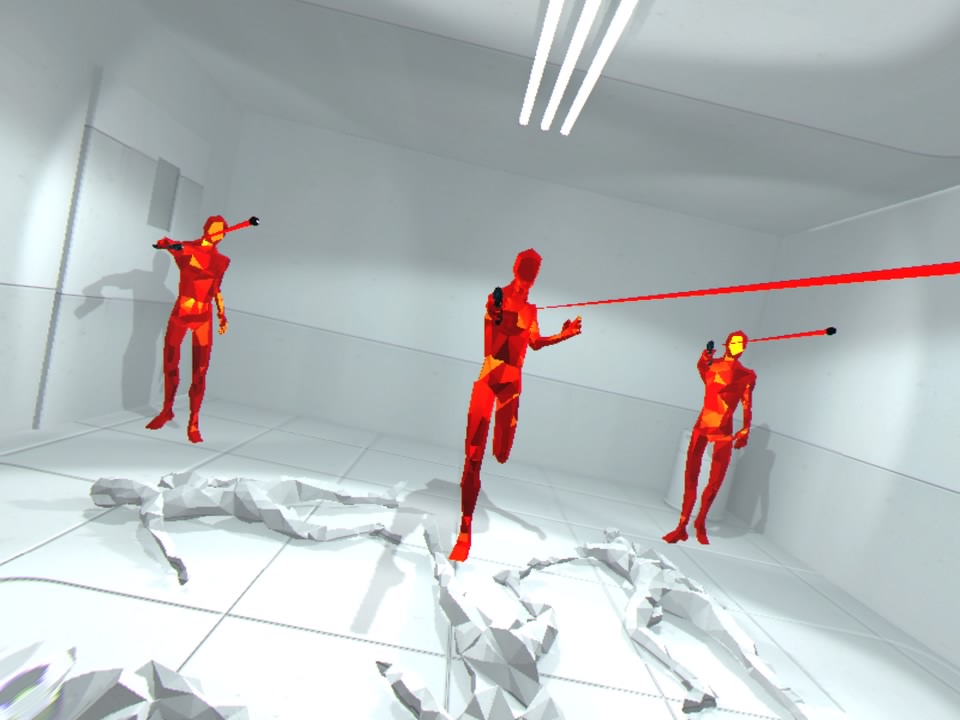 So there’s actually a decent amount of stuff to interact with and, here’s the thing, the game makes you feel like a bad ass. Literally following a bullet with your eyes as it whizzes past your head, punching a guy, catching his knife in mid air, throwing it at another enemy, catching his gun before unloading into the remaining guys is awesome and the fact that a lot of it takes place in slow motion just adds to the effect. It’s a shame it doesn’t record your run and show you a third person replay of your movement, it’d either look awesome or stupid but would be cool either way.

I’ve spent long sessions in the headset with SUPERHOT VR, it’s up there with Headmaster for me as a game that may be repetitive but just draws you in and when you succeed it feels fantastic. £20 may be a bit steep but if you’ve got the gear you probably want to try this one out.

SUPERHOT VR
8 Overall
Pros
+ A great concept
+ Makes you feel awesome
+ Plenty of modes after the story is done
Cons
- Can be repetitive
- Some tracking issues
- A bit pricey
Summary
SUPERHOT VR has some issues with tracking and repetition but manages to make you feel so bad ass that it's easy forgive. There is plenty of content to interact with if you decide to do so, just make sure you have a big enough play space to do the game justice.