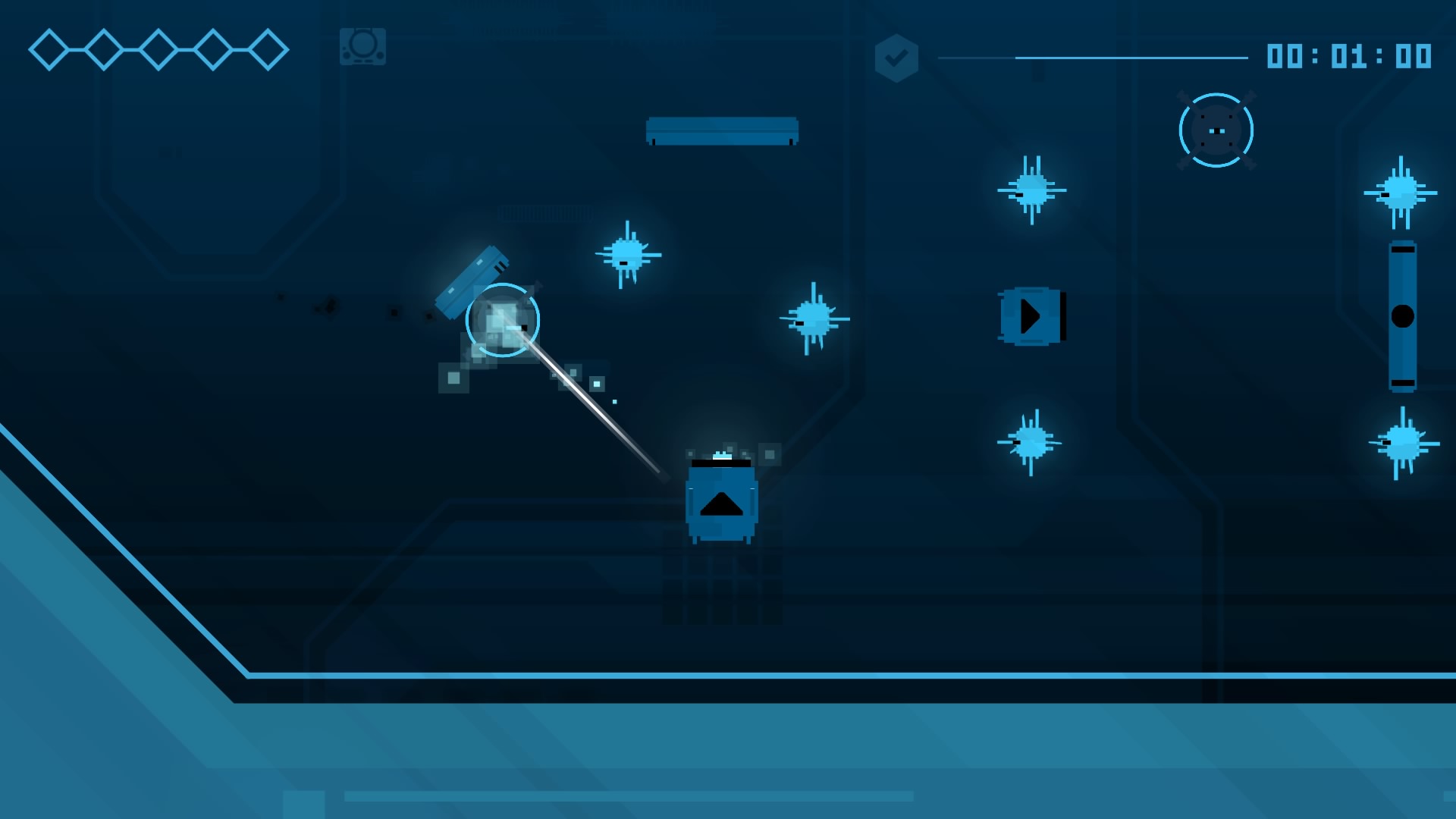 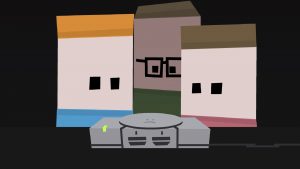 HoPiKo is a new ‘platformer-like’ game or at least that’s what developer Laser Dog Games call it. If I say there’s a speed run element, it’s got retro inspired visuals and has music created on a Game Boy then you’ll probably get an idea of what it is, but is it a good one of these?

The story goes, as if this game needed a story, that the Nanobyte virus is taking over people’s consoles and you as an HoPiKo (I think it’s more of a race than an individual) must save your captured brothers and get the consoles working again. What this basically boils down to is that the end of every level looks like a virus with three of your brothers floating around it.

As with all these speed run type games it’s the mechanics and level design that will keep you playing. HoPiKo is unique in that although there are platforms there’s no running and jumping, you can only launch yourself in a direction. Tapping the R1 button will launch you at speed at a right angle to whatever you’re stood on but if you need to be more accurate then you use the right stick to aim and upon release HoPiKo will fly in that direction. You continue in a direction until you land on something, hit an obstacle and die or if you’re in the air for too long you will also perish.

So the controls are unusual but you get used to them pretty fast. You can choose to aim with the left stick but I found the right stick to be fine (the developer’s thought process is that you aim with the right stick all the time in first person shooters) and a little reticule appears wherever you’re aiming so you’re not completely blind although the speed at which you’ll be aiming and firing will mean you can’t take your time to line up a shot.

Initially you’ll only have to worry about getting your aiming right but as the levels progress new elements are introduced as you’d expect. Moving platforms, lasers and enemies are just a few of the additions that stand in your way the further you get. Things are introduced at a decent pace with maybe a couple of new hazards brought in throughout each world. 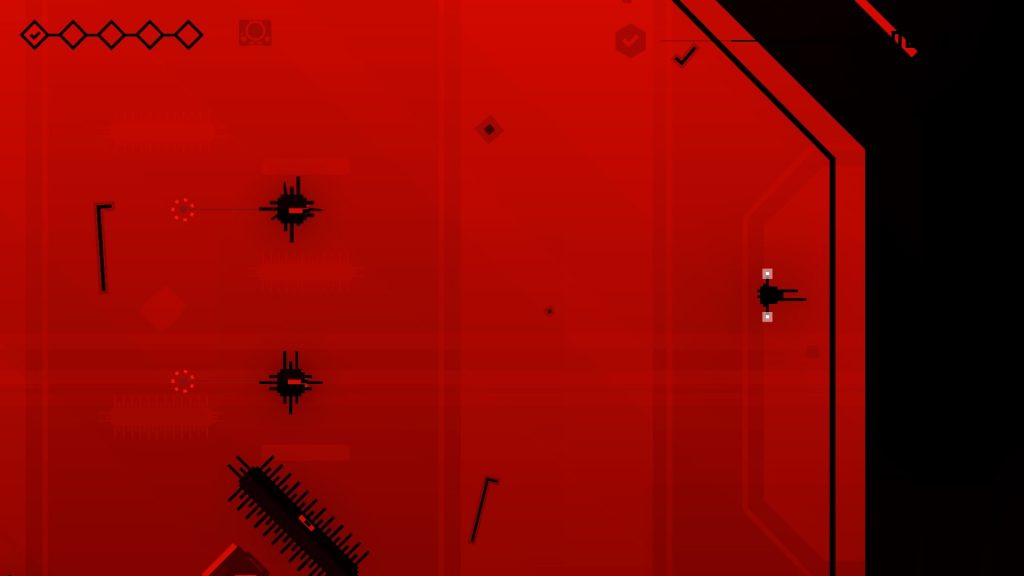 There are five worlds and each world is split into ten levels which rate you on your time taken and whether you collect the console within that level (not really hidden but off the beaten track). “But the game says it has hundreds of levels, that doesn’t add up!” Correct, well each level is actually five stages and the thing that will put off some people is that you have to complete all five stages in a row to complete the level. You die and you go back to the first stage, and if you want to get credit for being fast then you need to be fast on every stage.

On their own each individual stage is not really a problem, you will absolutely die but being able to concentrate on one stage would actually be pretty easy. The fact you have to complete five in a row makes it much more difficult. You’ll master the first stage then go on to struggle on the second, then you’ll best that and fall at the first hurdle on the third, then you’ll mess up on the first because you’ll be eager to get back to the third again. Although I did manage on a couple of occasions you’re not really supposed to be beating levels on your first try.

Although the visuals are quite clear the speeds that you’ll be moving at means you’ll have to learn the obstacles through trial and error rather than reacting skilfully to what’s in front of you. Stages are mere seconds long so it’s not too much of a hassle and the restarts are quick so if you enjoy the Super Meat Boys or 10 Second Ninja Xs of this world then don’t let that put you off but if you’re the type of person who get frustrated easily then you should probably stay away.

As you progress through the worlds you unlock a few different things seemingly based on the amount of things you achieve, so if you beat the speed tests on most levels you’ll unlock stuff early. Obviously if you complete a world you unlock the next, but along the way you’ll unlock a bonus set of levels, a speed run mode, a hardcore mode and new music tracks. 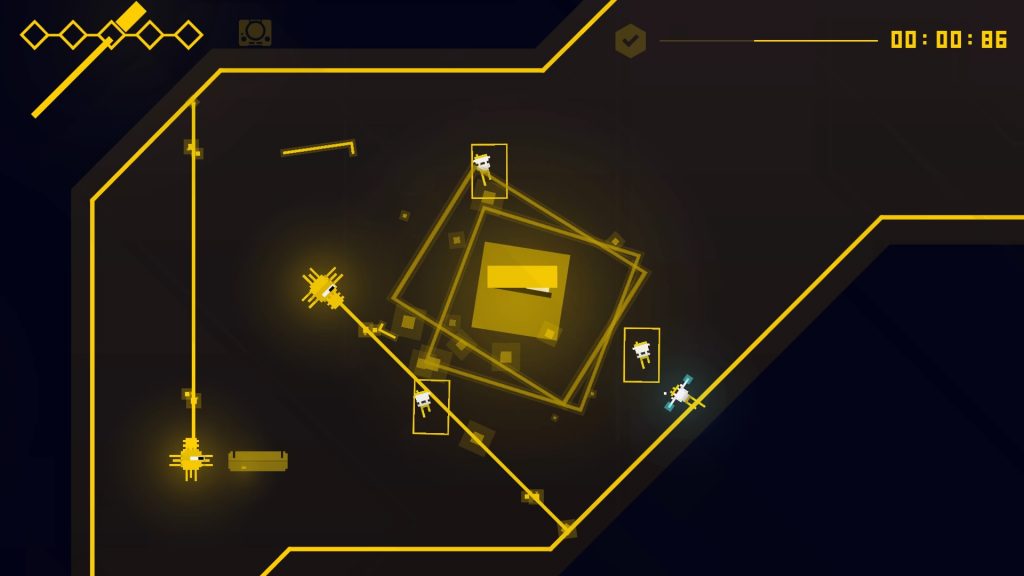 The music is treated like a big deal in this game, it’s been totally created on a Game Boy and it announces as you unlock each new track as you progress. I can see they’re going for that Super Meat Boy/VVVVVV vibe but I didn’t encounter any songs which quite hit those heights (I think the first track is actually my favourite) though they’re all good. If you do find a track you like you can choose to play whatever song you want on whatever level, you can loop it, randomise or shuffle the tracks. It’s a nice feature to have.

Speed run mode makes you play through all fifty levels in a row, where if you die you return to the beginning of whatever set of five you’re on to continue trying. There seems to be a symbol for online leaderboards but nothing got posted the first time I completed a run and when I did it again I was number one but I can’t view any leaderboards at all. Hardcore mode challenges you to do all fifty levels at once without dying. I’ve yet to manage this.

The bonus levels are a set of five levels that have you driving a vehicle primarily, rather than jumping about. These were actually my least favourite parts of the game as the vehicle handles like a boat and you move so fast, and the camera is zoomed in close enough that you’re basically guaranteed to hit every obstacle at least once whilst learning the ‘track’, starting at stage one every time you die. As they are bonuses I don’t want to hold it against the game and it’s nice it’s trying to do something different but they simply aren’t very good.

Beyond a few visual bugs and my character dying for no reason a few times the game runs well. The clock seems to start ticking when the level starts but when you gain control of your character is a little vague, they probably could have had the timer start upon your first jump but maybe they want your first go on a level to be panic fuelled rather than considered. Naturally as you’re quickly flicking the right stick around you aren’t going to hit precisely where you want every time but in general things work out. 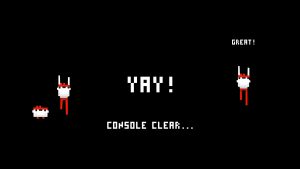 You already know if this game is for you. It’s a unique take on the speed run based platformer but it’s a good one. I went back to the first world and my skills had noticeably improved, that and I’d repeated them so much the first time around I remembered them all perfectly. If you’re into your Super Met Boy style game where your determination will prevail eventually then HoPiKo will fill you with satisfaction, for others the fact you have to complete five stages in a row just to progress will probably be enough of a turn off. Now don’t make me type that name again.

HoPiKo
8 Overall
Pros
+ Unique gameplay mechanics + Good music + Plenty of challenge
Cons
- Bonus levels - The amount of repetition will irk some - Minor bugs
Summary
HoPiKo is a unique spin on the speed running platformer formula and a largely successful one. The need to complete five stages in a row in order to make progress will be an instant turn off for many but for fans of the genre it's an interesting take that'll require determination to beat.