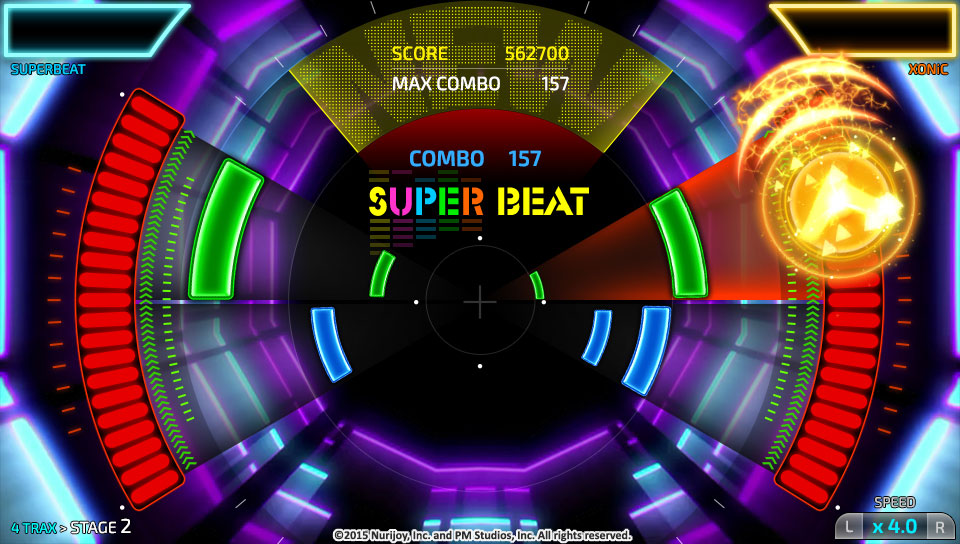 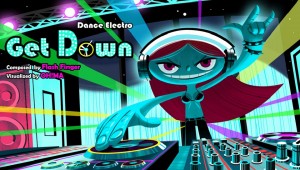 The rhythm action genre has always been well-served on handhelds and on the Vita, the most popular one is DJ Max Technika and some of the devs from that game have now reformed under the name of Nurijoy to carry on doing what they do best and the product of that is this sugar-rush of a game:  Superbeat: Xonic.

Much like a Guitar Hero game, there’s no real plot to worry about here.  Instead you just get a sequence of songs to play through and new songs are unlocked as you level up.  You’ll be replaying songs over and over for two reasons.  Firstly, because the leveling takes a while but mostly because mastering this game on a tune by tune basis is going to take a lot of practice.

You interact with the songs with either the buttons and sticks of the Vita or, more sensibly, with the touchscreen.  Songs require a few techniques to navigate through.  As the notes of the song fly towards you (like a tunneled Guitar Hero), you either tap, hold or swipe them and at first this seems quite nice and intuitive.

However, even on the easiest settings the game soon gets pretty tricky and not long after that it gets bollocksly difficult.  I fired up one of the first dubstep tunes I was able to access and all my fingers fell off and now I’m typing this with my nose.  If you’ve ever seen a really good street dancer doing that weird roboty dubstep dancing, well imagine your fingers doing that.  You’ll need to be on top of your game to make any real progress.

It’s hard to say that the difficulty is a negative point.  I mean, if you’re good at the game then you’ll appreciate the additional challenge.  It’s a bit like Trials.  I hate the Expert levels but why cater to my unskilled ass?

That said, compared to genre highlights such as Parappa The Rapper and Elite Beat Agents, the game lacks a bit of charm.  It has more in common with Rock Band Blitz or Amplitude but those games managed their difficulty a bit better.  And they had better soundtracks too.

That’s not to say that the soundtrack is bad.  If you’re into over-produced J-Pop, rock, R&B and dubstep then I hate you but the game doesn’t.  For me, it’s all a bit too autotuned bullshit for my liking and when you’re frantically scrambling your fingers up while trying to keep up with a chirpy Japanese pop tune with a girlie vocal line, there’s something of a disconnect there.

Do you remember that time, around ten or fifteen years ago, when you saw people playing Dance Dance Revolution for the first time?  When you see someone absolutely killing the game with insane footwork and skill are you impressed?  This is the game for you.  Do you think they look like a cock?  Maybe give Superbeat: Xonic a miss. 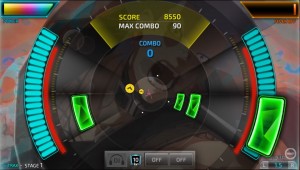 The gameplay is tight though and the clean presentation is nice enough.  There isn’t much to look at beyond the actual gameplay display.  Each stage is called a ‘club’ but beyond the cover art for each tune, all you’ll be looking at is a tunnel of note indicators and the while there is some background visualisation going on, it’s not exactly Rez or anything.  In fact, it’s fair to say that the visuals in the game are more what you’d expect from an indie PSN release but I guess all that song data, and the licensing for it, are the reason this is a full retail title.

If you’re looking for a deeply challenging rhythm action game then this certainly fulfills that brief but as the complexity of the rhythm action increases, many of you will find the fun drying out.  So really, it’s not a case of how good this game is (look, it’s good.  Alright?) but rather how much are you prepared to back your skills?

Superbeat: Xonic
7 Overall
Pros
+ Very tight and complex gameplay that caters for super skilled fingers. + A big, and quite varied, setlist of songs to get through.
Cons
- Fairly ordinary presentation. - Can get extremely difficult. - Music can be a bit shit.
Summary
If you don't mind your music being cheesey and your fingers being dead, then this is a great example of the rhythm action genre. But it really is rather difficult.