If you’re a regular here, you’ll know all about Ratalaika, the Finnish publishers who put out at least one game a week and keep trophy whores across the world busy with a series of short but easy games with which to increase their Platinum tallies with.  Well, Super Destronaut DX was one of the 2018 releases, a simple-but-attractive Space Invaders clone, albeit with more of a light Space Invaders Extreme approach to its gameplay and visuals.  They followed it up with Super Destronaut: Land Wars last year, which was an FPS set in the same universe.

Well, now the original game has a proper follow-up.  Super Destronaut DX-2 is another Space Invaders-inspired title which offers a selection of modes to tackle but pretty much stays faithful to the original.  That is to say that you get a series of fixed screen levels with you at the bottom, aliens at the top and bullets flying from either party.  Given how different Land Wars was, it’s actually surprising just how similar DX-2 is to DX.  They are more or less the same game. 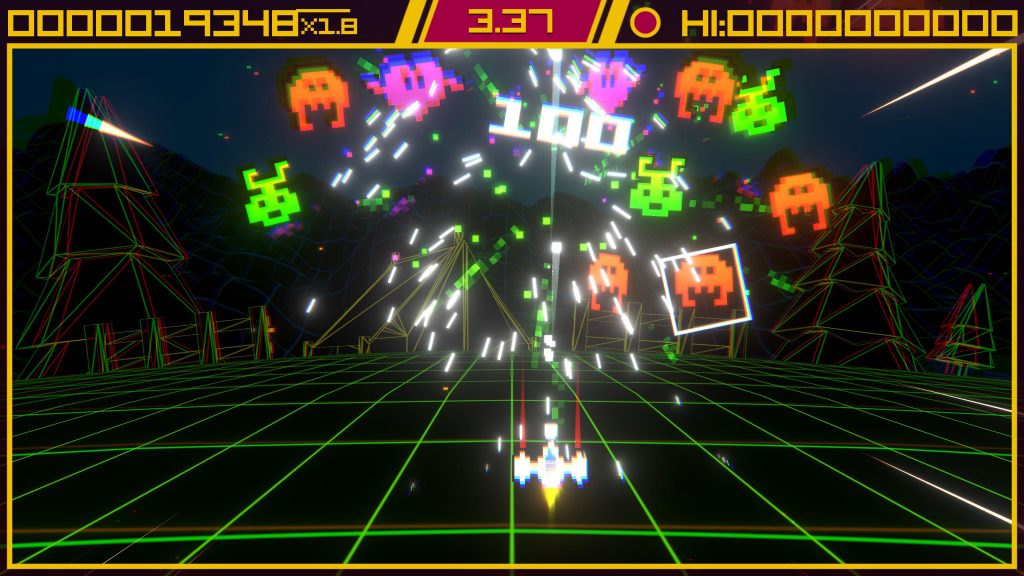 Each of the main campaign’s 25 levels have pretty much the same set up.  You clear aliens from above.  As with DX, there are changes to the rules though.  Where many stages just need you to kill everything, others impose time limits or, more interestingly, bullet limits.  These require you to be more methodical about how you target your enemies.  Some stages also play around with the size and speed of bullets.  It’s nothing game-changing or particularly innovative but it does help to mix up these challenges a little.

Now, when we reviewed DX we gave it a four, praising the nice visuals and simple playability while bemoaning the absolutely absent level of challenge.  Well, that’s changed a little here.  Sure, the Platinum trophy isn’t going to elude you for very long at all with DX-2, but the game puts up more of a fight than before, at least in the main campaign mode.  Certain time attack stages were a bit of a pig to complete and some of the trophies in the arcade modes (of which there are a few modes based again around bullet and time limits) actually require a bit of skill.  Sure, it’s not like 1CCing R-Type Final 2 or anything even remotely as hard but it does definitely make the game better than the original.  Although that said, you don’t need to beat the whole game to get the Platinum. 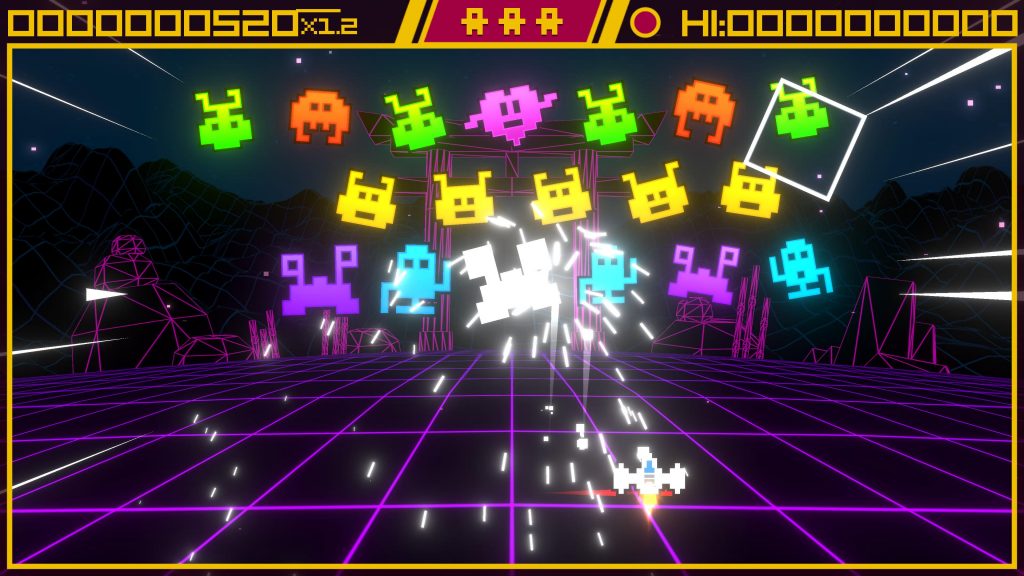 However, some complaints from the original game do still remain.  The power-ups that you earn from shooting flying saucers aren’t particularly dynamic or interesting, and are too short-lived to be really useful, and the game still has that feel of taking the original Space Invaders and not really doing much with it.  As we said in the previous review Space Invaders Extreme leant heavily into its clever scoring system while Space Invaders: Infinity Gene was super interesting and creative when it came to weapon types.   Destronaut does some of the former but none of the latter.

That said, the increased difficulty really does help the game go from being an irrelevance to actually offering a little bit of challenge and therefore interest.  And it is still cheap, cute and slick.  The extra modes are quite enjoyable, especially Time Rush mode which is all about keeping your multiplier up over 120 seconds.  The other modes (Classic, Hardcore, Time Attack and Bullet Mode) all offer their own twist to the gameplay but it is all still very much the same game throughout and so a lack of variation, both in gameplay and in the visuals, is a bit of an issue too. 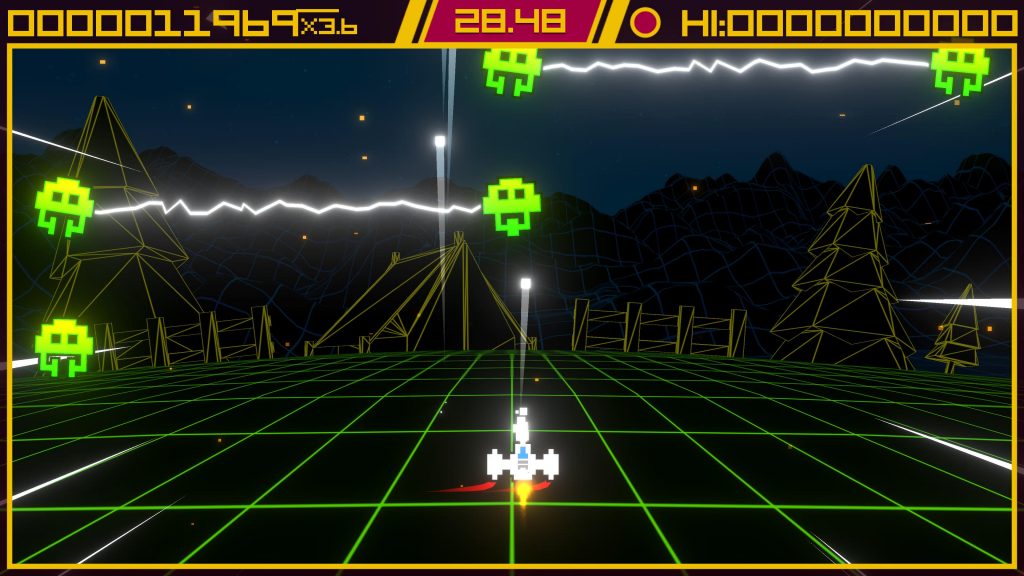 It’s a shame though with the visuals as the game has such a slick, neo-retro look but the backdrops are actually less interesting than before and no new enemies are introduced after a while.  A few boss encounters and set pieces would have been nice, just to keep things interesting.  The synthy music is nicely in keeping with the ’80s inspired presentation though and the overall look and feel here is of a game that is a little more premium in quality than the usual retro fodder we review.  In fact, we’d go as far as to say that the coders behind this are actually very talented but just need to aim a bit higher when they are in the design stage of production because they’re clearly capable of more.

Overall though, the added difficulty does at least give this game more of a substantial feel, even if the overall product is still pretty thin.  It’s a tiny step in the right direction though and adds a little something to this capable, but limited, retro shoot ’em up series.  As ever, purchasing the game gets you access to the PS4 and PS5 builds of the game (each with a separate trophy stack) but there are no actual improvements in the PS5 version at all.

Super Destronaut DX-2
5 Overall
Pros
+ Nice visuals
+ Accessible gameplay
+ Short levels break up the monotony
+ Difficulty is better than before
Cons
- Is a bit samey throughout
- Lacks ambition
- Does nothing new
- Still pretty easy
- no upgrades evident in PS5 version
Summary
If you're in the market for a cheap and brightly presented Space Invaders clone, Super Destronaut DX-2 will keep you entertained for an hour or so but it's just as limited as its predecessor.