Another day, another visual novel. Not really a genre I gel with, I keep trying to find ones I’ll enjoy. I find them to really lack interactivity and the stories they tell aren’t especially deep or enthralling. Hopefully Cross the Moon will change that. Written by Patrick Rainville, it’s a tale of vampires, murder with plenty of occult influences. 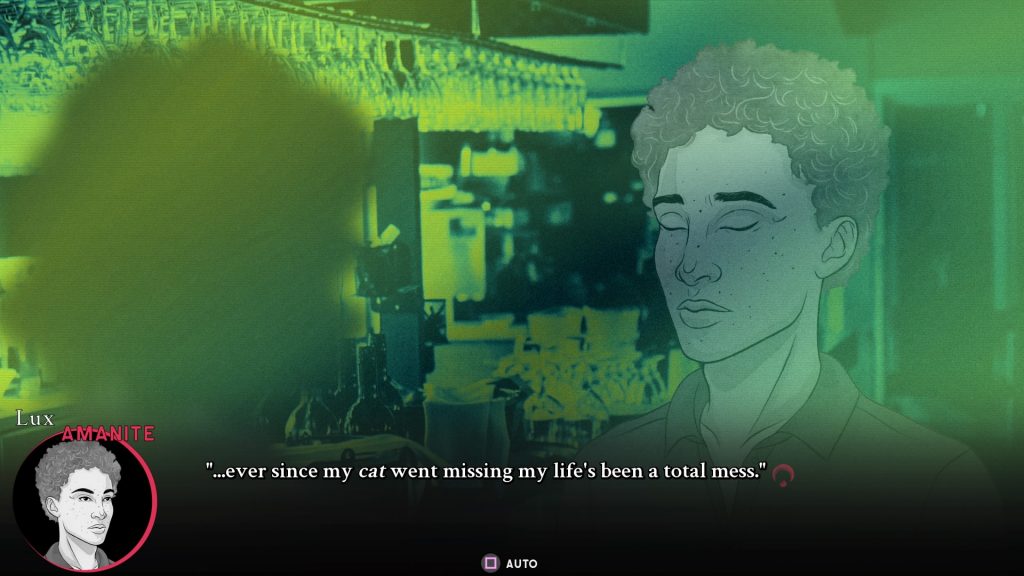 The game opens with a disclaimer that all characters are over 18. It rings some alarm bells but, surprisingly, Cross the Moon doesn’t really deal in sexual content. The story begins in a bar. The country of L’Amouricaine is home to a community of vampires. They coexist with humans but it’s not exactly a harmonious arrangement. They’re considered second class citizens but seemingly our cast isn’t especially held back or compromised by these rules.

Our protagonists are Lux, a fairly bland teen who is currently in a relationship with a French girl. Early on it’s divulged that he has the hots for Apollon, his best friend. Completing the awkward love quadrangle is Corentine, the stereotypical crazy girl that has taken Apollon’s heart. She’s got a sinister air about her and some of her dialogue is occasionally Stoker-esque. Our final main player is Aurora. She’s Lux’s sister and she’s looking for work at bloodFlow, the city’s supplier of blood.

With the basic world-building done, the plot starts in earnest. In the opening act, Lux, Corentine and Apollon decide to mesmer and then drink the blood of an unsuspecting bartender. The story seems to turn a blind eye to what’s effectively an assault as the stakes inevitably raise. The victim is later found dead with Apollon quickly nabbed as a prime suspect. 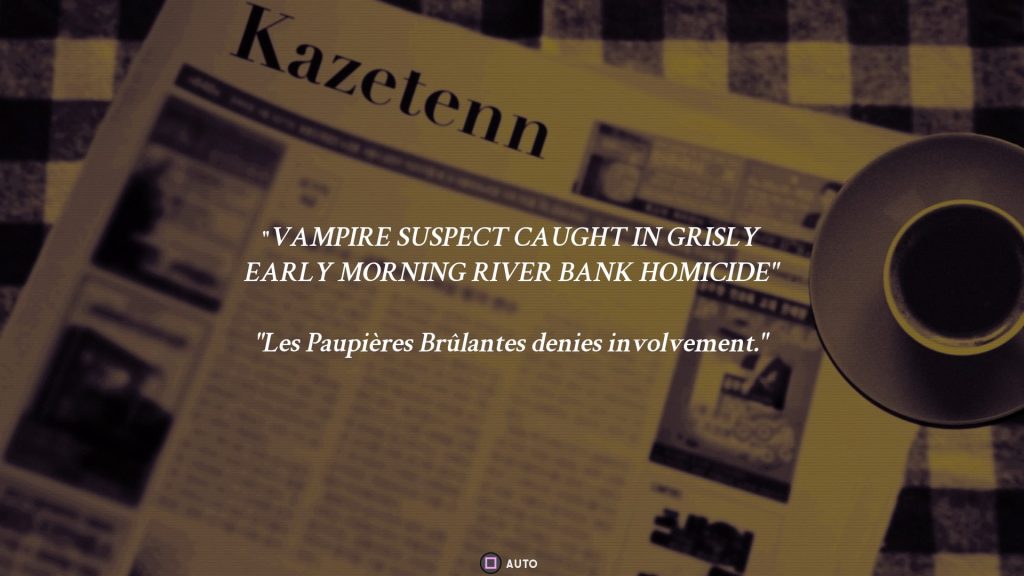 As swiftly as it escalates, what follows is a tale with many twists. It’s welcome as I’ve grown tired of visual novels where the same tropes play out. There’s occult elements, instances of corporate and scientific greed and every character’s past is uncovered during the game’s lengthy read. I would call it interesting but the script is wordy and it delivers a slow burn. Furthermore, I find some of the dialogue off-putting. The setting and characters are very contemporary but the script can’t help throwing some Victorian, gothic spiel. It’s a vampire story but the homages paid to great vampire literature comes off poorly contrasting with the rest of it.

Aside from the main crew, a policewoman joins the fray to assist with the investigation. Why she’s there feels a little contrived but it does offer another perspective. I was hoping for some police procedural and some potential cat and mouse narratives, sadly that was abandoned quite quickly. Cross the Moon is more interested in bigger themes. Conspiracies, secrets, rituals and a whole manner of threads that do feel kind of crushed together. There is a cohesion through it there’s a lot thrown at in several hours.

I didn’t really feel much for the characters. Corentine is definitely framed as an antagonist and there’s no real nuance to her. Lux and Aurora don’t really interest me and Apollon barely features after his arrest. It’s a story more driven by events than people and I feel the writing suffers for it. 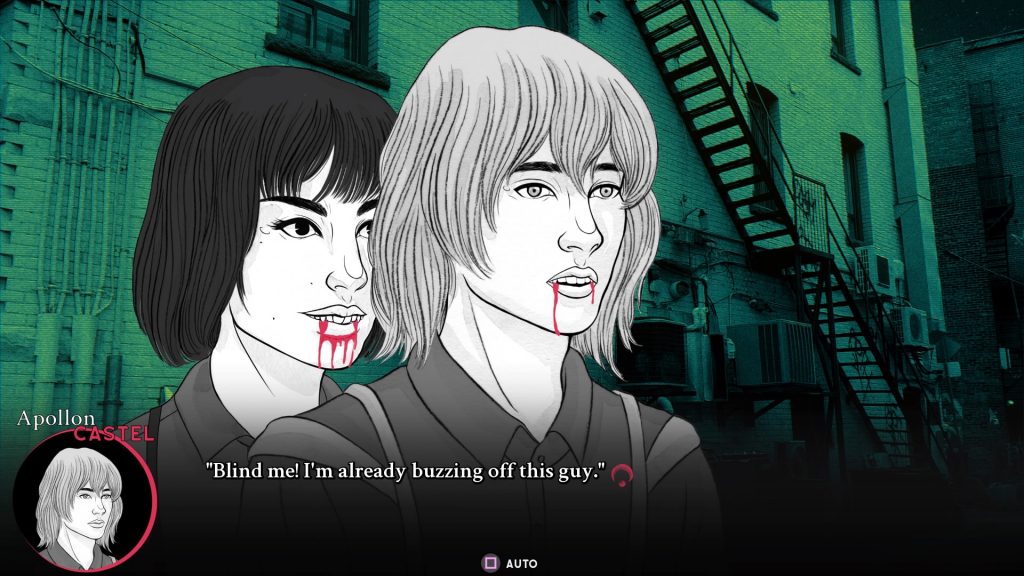 Operating at a slower pace helps deal out a lot of information. Character-building can be delivered in chunks and it becomes easier to digest. With the main plot moving from pillar to post, it’s welcome and becomes simpler to follow. There’s some occasionally daft deviations, mostly relating to vampire culture, but it’s relatively grounded.

What the game really lacks is interactivity. Visual novels struggle with this but there’s usually something like branching choices that give players some agency. Cross the Moon feels more like thumbing through a book. There are collectible diary entries you can unlock by pressing circle at certain times, but they unlock more backstory for you to read. The lack of stuff to do results in a game that can feel like it’s dragging. It doesn’t gain a lot by being on a gaming platform.

One thing Cross the Moon does well is present moody visuals. The backgrounds aren’t short of detail. There’s some good use of photography and colour to deliver something that is tonally dark and off-kilter. It fits well with the story and really helps you place the action. It feels very European and under the cover of darkness. I really enjoy looking at it. 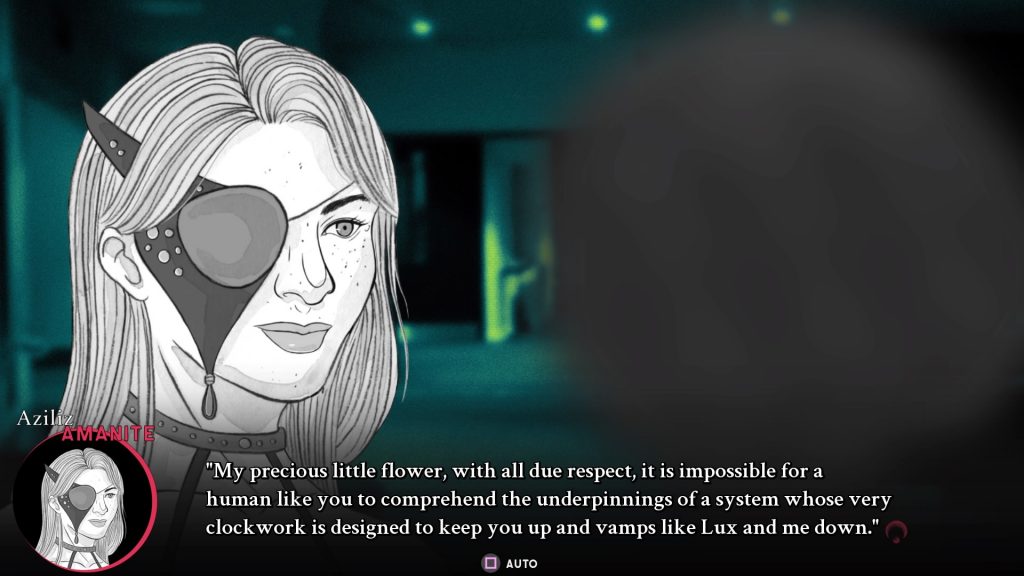 Character portraits are monochrome and contrast well with the backgrounds. They’re distinctive but they do tend to stay largely static. Very little opportunities are taken to animate them so it rarely takes your attention from the text. The soundtrack doesn’t quite meld with the moody visuals. It doesn’t help that it’s overpowering in volume. It’s a mix of guitar and electronic music and some of it works better than others. The more cheerier tracks don’t really settle with the gloomy visuals. It’s a pity it’s not more cohesive.

It just doesn’t quite come together for me. The pacing of the lengthy tale does bog down and the characters don’t engross me much. As eventful as the story is, the supernatural elements mesh poorly with contemporary setting and dialogue. It is great to look at, although the lack of player choice makes me wish I’d rather had a book in front of me.

Cross the Moon
6 Overall
Pros
+ A great, moody visual style.
+ A wordy story with plenty of intricate twists.
+ The soundtrack occasionally compliments the action.
+ A refreshing addition to a genre that is normally so predictable.
Cons
- The lengthy story can drag at points.
- The characters don't especially interest me.
- The occult elements don't always gel with the contemporary setting.
- No dialogue choices or opportunities for player agency.
Summary
Truth be told, there's a lot to Cross the Moon's story. It's eventful but the lack of really interesting characters stifles my interest. It looks great with photography given a gloomy tone of the underworld. It's a shame the soundtrack can only match it some of the time. The lack player agency also took away whatever minor interactivity this genre tends to roll with. It's not a bad visual novel but I found the wordy script tough to get through.