Curved Space is a very polished shoot ’em up from Canadian coders Only By Midnight and it’s a little different to its peers on PSN and beyond.  Instead of the usual 2D vertical/horizontal style or the absolute glut of seen-from-above twin-stick shooters out there, this one is seen from behind your ship, like any manner of flight-based ones, but here you are on the surface.  Interestingly though, those surfaces are strange, irregular shapes.

Now we have seen that before with Nano Assault NEO-X (a PS4 game that back to the early days of the console and indeed PlayStation Country) but its not very common.  Anyway, the ‘curved’ in the title refers to the shape of many of the levels. 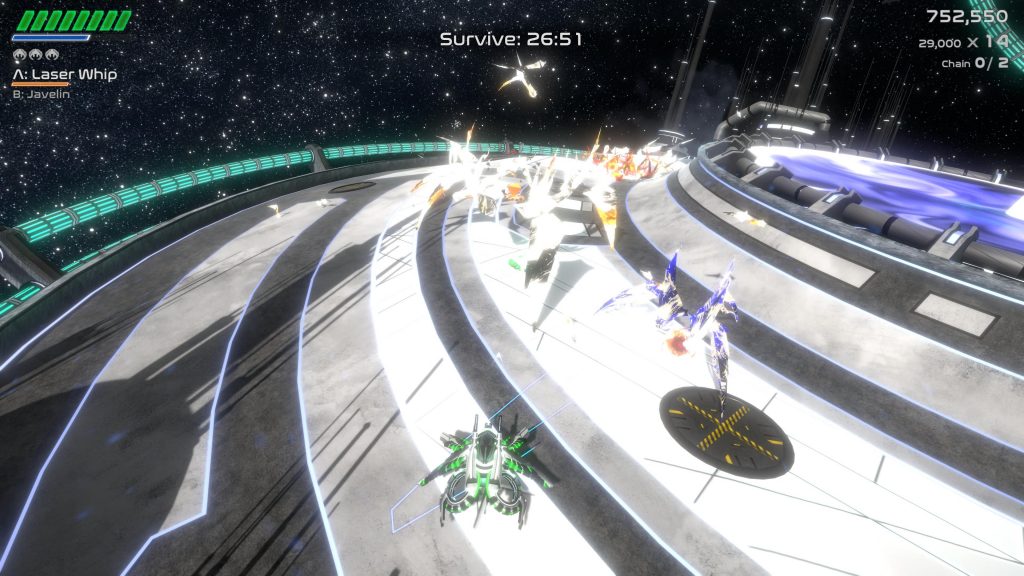 This is a futuristic shooter set in space (that’s the ‘space’ bit of the title) and you are tasked with clearing each stage of the campaign of space spiders.  These come in various sizes and shapes, with different offensive capabilities.  The main thing though is that they’ll warp onto the level’s surface and will hunt after you.

Thankfully you have a few ways to deal with them.  Primarily, you’ll be shooting them.  This works exactly as you’d expect, however the game does offer you a large number of weapons to pick up and try out.  All the usual suspects are here – machine guns, rockets, lasers, mines and so on – but also such things as laser whips, scythes and way more.  None of the weapons are particularly bad either, so it’s worth ditching your favourites to try any new ones. 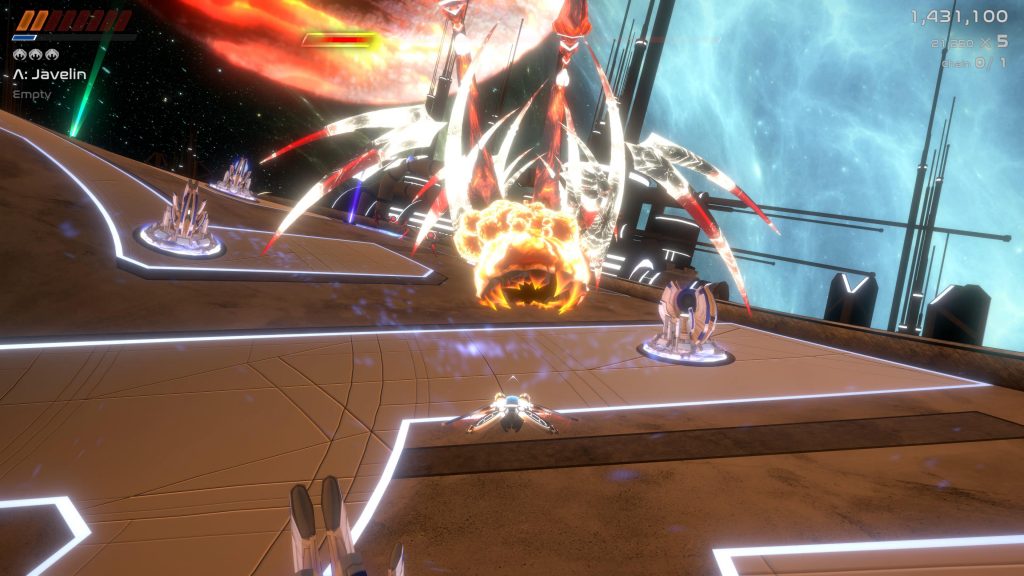 You are also given a leash that has a couple of functions.  The first is to trap enemies in place while the other is to tie them to harvesting posts so that you can drain them of their energy.  Leashed enemies also take more damage and drop more goodies, so it’s a mechanic worth exploring.  Leashing enemies will also set them up nicely for your dash attack, which sees you crashing into them head-on with you generally coming off best in those encounters.

Aside from that, there’s a simple enough overcharging mechanic where you can use stored energy to power up your weapon temporarily.  This can be particularly useful, especially during the game’s many boss battles.  Although there are a few gameplay mechanics here to get used to, they all work quite well.  So, on the face of it, things look pretty good.  The game even gives you various choices during the campaign, branching your mission path in new directions, giving some degree of replay value. 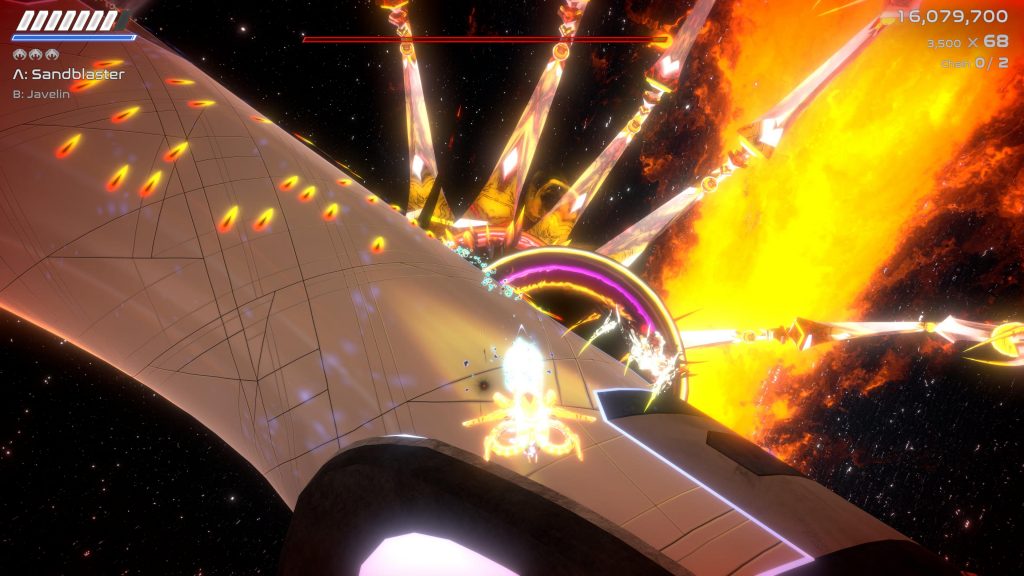 It’s not all good news though.  There’s something just a little off about the combat.  It feels a little chaotic at times, usually when a level’s awkward geometry works against your camera a little to obscure the action but more than that, the combat can be a little unsatisfying.  Your shots don’t feel damaging, enemy impacts feel small, kind of like a game of Super Smash Bros.  Boss battles take a while to get through and between the camera and the low-impact shooting, it can feel like their energy bars are going down one tiny pixel at a time.  There’s never really a sense of drama, no real dynamics.  Indeed, playing on the default normal difficulty, it felt a little like playing with a cheat mode on, where enemies take a while to kill but they’re never going to kill you.

After finishing the game, I chose to keep going which ups the difficulty level but I wouldn’t have really noticed unless I’d seen the change written down.  That said, there was a bug that stopped me completing the game, but the devs crushed that with a super quick patch after I had a word on Twitter.  Very good work. 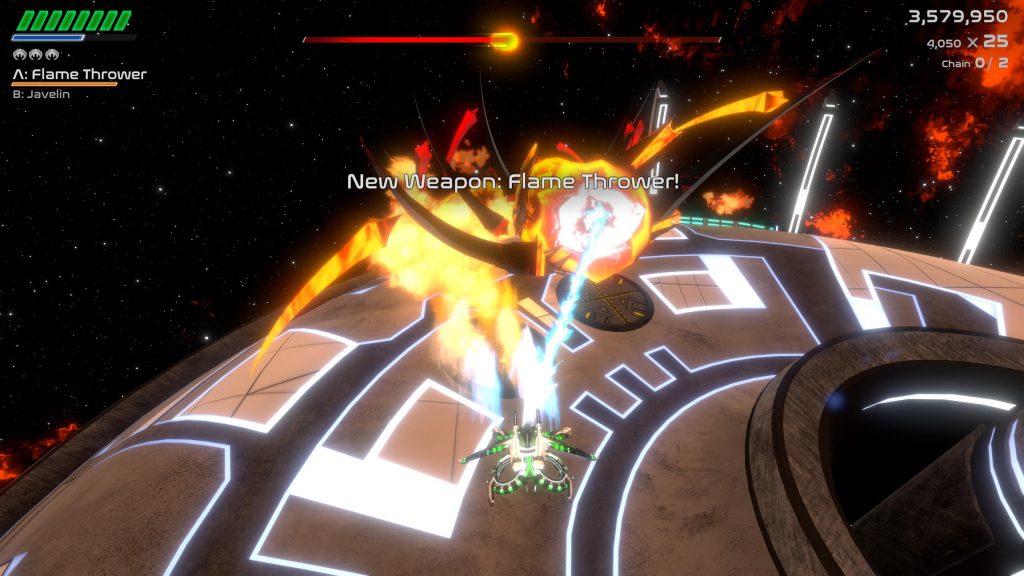 It’s a shame that the combat isn’t more immediate, impactful and varied because the level of polish afforded to the game is really noticeable.  The 4K visuals are detailed and clean, giving a really futuristic feel and the movement is silky.  The levels, and the way you move through them, are very cool too.  They don’t always aid the gameplay but they look very sophisticated.  This is all amplified by the game’s killer soundtrack which is full of synthwave bangers.

And when you throw in the extra modes, such as an arena mode and daily run challenges, there’s plenty of shooting to get involved in here.  But it just doesn’t click as much as we hoped it would which is a shame because it looks so nice.  You can tell that Only By Midnight have some serious coding chops though and we’ll be very keen to see what they come out with next.  We just hope it’s a little more dynamic and exciting than Curved Space but we’ve not written this game off entirely.  It’s still very playable and it’s not unenjoyable but it feels like the gameplay doesn’t live up to the presentation.

Curved Space
6 Overall
Pros
+ Lovely visuals
+ Great music
+ Smooth gameplay
+ Has some depth
Cons
- Combat is a bit clumsy
- Lacks impact
- Quite samey
- Story starts to lose its appeal a little
Summary
Curved Space is a gorgeous looking, and sounding, shoot 'em up with a nice planetoid-hugging level gimmick but in reality it's a little boring, and awkward, to play. It's not bad but it doesn't live up to its full potential at all.