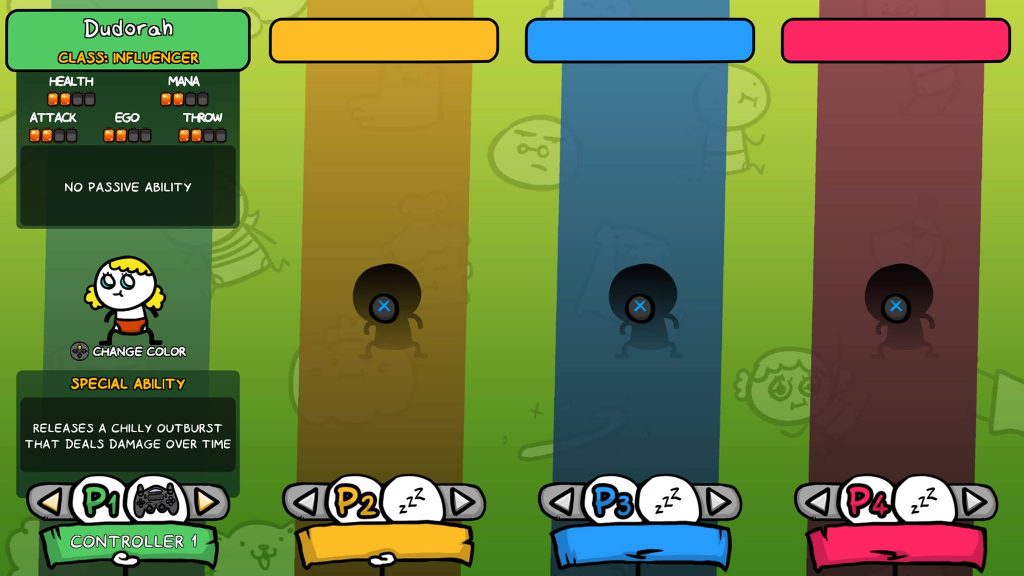 Super Cane Magic Zero is an action RPG which has come as the result of a successful crowd funding campaign. The game comes from the mind of Simone ‘Sio’ Albrigi, an Italian comic creator and YouTuber, in collaboration with Studio Evil. If you are not a fluent Italian speaker then you are forgiven for not knowing much about Sio. However, to summarise briefly, Sio specialises in oddball comics online that are caked in absurd humour and non-tangential storylines.

By the developers own admission, Super Cane Magic ZERO is a weird RPG. From the word go, you are introduced to a story about a cake wizard that perishes, his dog then proceeds to inherit his magic and then proceeds to go on an apocalyptic (yet adorable) rampage, sending the world of WOTF into disrepair. It is the job of the player to take control of character that falls from the sky during the chaos who must try to make sense of the world and subdue the dog that is causing all the mayhem. This is conveniently skimming over a sub plot in which the character is able to conjure powers based on information he is told by nearby characters. It’s utterly barmy and if this kind of humour doesn’t land for you then it’s likely you’ll be at an immediate loss, Super Cane Magic Zero is unapologetically silly and this silliness translates to almost every facet of the experience, from the item pickups to the gameplay itself.

As an action RPG, you can expect a Zelda-like affair, the action is viewed from a birds-eye perspective and you run around slashing monsters with various weaponry and items you find along the way. Progression is dictated by completing quests in and around the world of WOTF and to get through, you must find various characters that grant special abilities and items for you to progress further. The core method of combat is slashing your opponents with improvised weaponry like rules or sticks, although there are a number of additional mechanics that add to the depth of the proceedings. Namely, after battering an opponent enough and knocking them down, you can pick them up and lob them at other surrounding enemies, alternatively you can pick up items that are scattered around each zone and use them as projectiles. 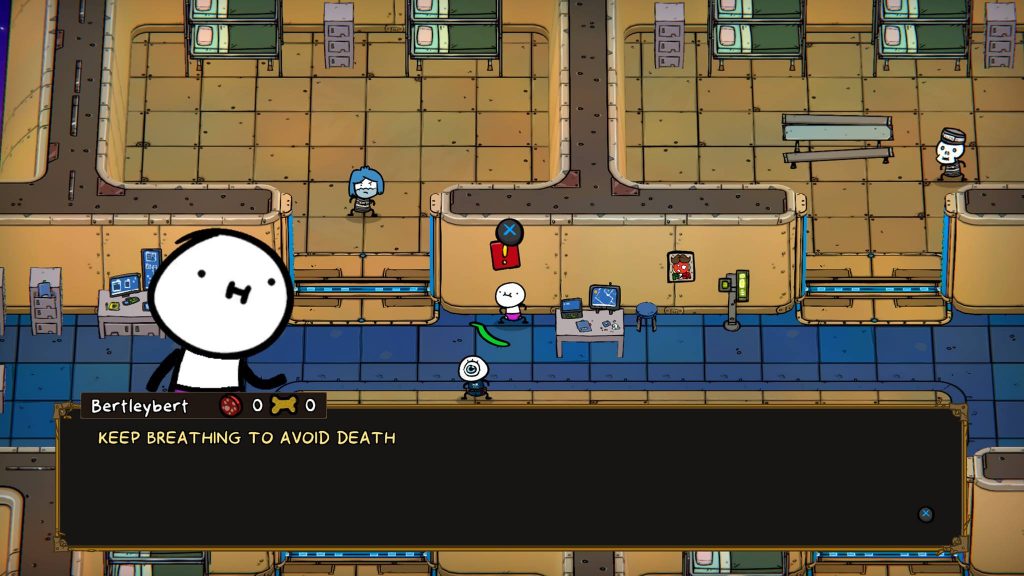 As you progress you can level up and unlock abilities based on belief systems. These start off with the happenstance that comes from your characters introduction, as you fall from the sky and make an unlicensed crater it comes to your attention that you may be a comet. This happens to unlock cosmic based abilities that take on the attributes of a space-based projectile. These beliefs later expand to things like Dogmancy and Candygenesis which have upgrade paths that include unlocks such as Space Jam which are basic stat boosts with absurd naming conventions. More potent upgrades include being able to run on water or throw enemies further and there is plenty to work towards to keep you busy.

Another core gameplay mechanic is eating. Much like the items you throw, you can pick up others that will provide sustenance and temporary stat boosts depending on what you eat. If you choose to nosh down on meat, you get a gastronomic strength boost, vegetables and fruit provide handy regeneration buffs and suspect orbs will help replenish mana in quick bursts. However, eating the wrong things can cause damage to your character, whether by poisoning, explosions or by taking away a potential weapon. For example, lava donuts are deadly to eat, but they are also deadly to enemies that you lob them at. Bananas are also an unsuspecting weapon, acting as a boomerang of sorts. 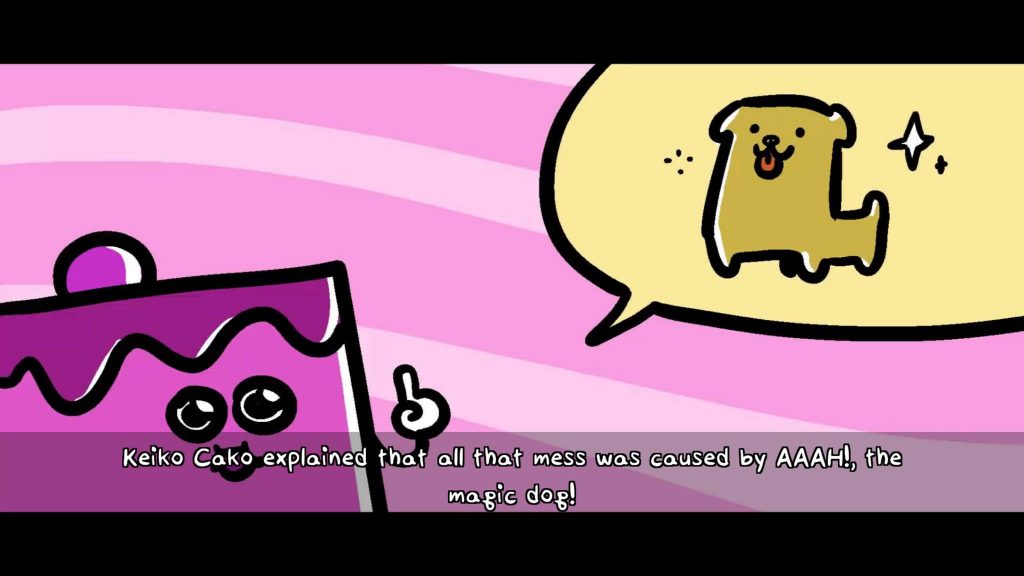 In all, the gameplay is a surprisingly deep mix of styles that comes together quite nicely, in terms of depth I would put it similar to likes of Diablo with the streamlined action RPG approach, with just enough to keep things interesting beyond the point of grind. This is helped immensely by abilities gained with certain weapons and stat based levelling, it all seeks to keep things fresh as you move on and does a pretty good job of it.

Alternatively, if you want a side distraction from the adventuring, you can take to local PVP arenas with friends to engage in combat. These are quite handy if you want to experiment with different items before finding them in the main game, but otherwise it exists as not much more than a simple distraction from the main game. It is far more fun to play through the main story mode with friends instead as that is truly where the game shines, however note that there is no online mode as of yet, which puts a damper on things.

As the game is based on the work of a comic artist, it’s important that the visual style is carried over to the proceedings of the game. This is where Super Cane Magic ZERO really shines for me, as the game world and characters are incredibly well realised. There is a distinct 2D meets 3D layering effect that is eye catching and Sio’s characters have enough animation to keep things cartoony and fluent. It’s rare to see a game of this type with so much colour as opposed to the many Diablo clones out there that focus on the grim-dark aesthetic. 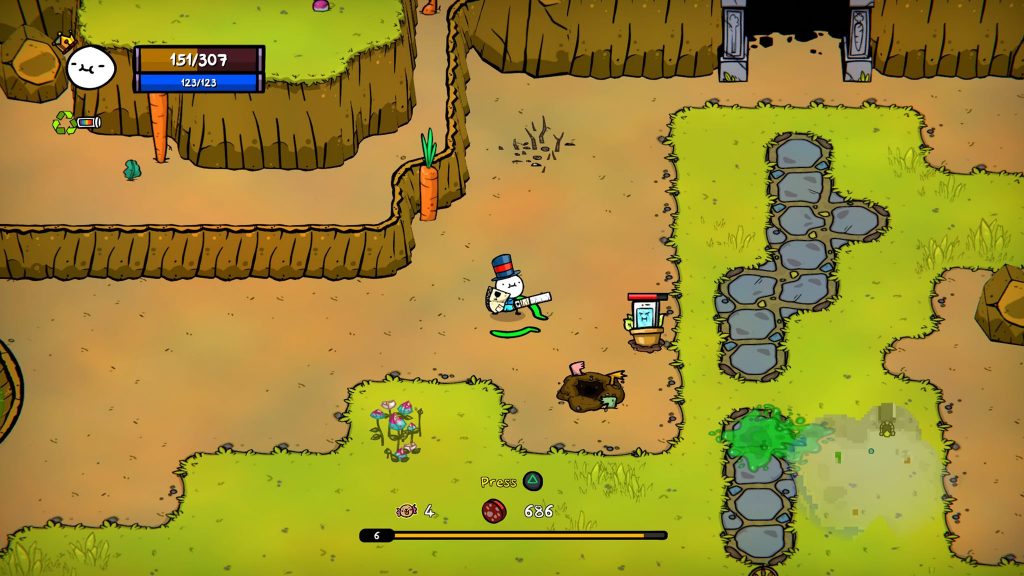 As I played through Super Cane Magic ZERO, I wasn’t necessarily as sold on the humour. However, it has an undeniable charm to the action and story that kept me playing through. I found a few general issues such as occasional slowdown and a strange issue in which some NPC’s would not progress through dialogue even though I had prerequisite items, however I have been assured that issues such as this are going to be addressed in the next few months. This will be something to watch if you are a stickler for detail and bugs. Overall however, these are minor issues in an otherwise fun and challenging title

Super Cane Magic ZERO
7 Overall
Pros
+ Surprisingly deep for a game about magic dogs and cake wizards
+ Fun combat, particularly when you can throw enemies
+ Local coop mode can be a lot of fun
Cons
- Frequent slowdown issues and bugs that need ironing out
- The humour didn’t quite land for me
- Aiming can feel a bit off
Summary
Super Cane Magic Zero is an utterly daft game with a surprising amount of depth. Some minor technical issues and oversights get in the way of the fun, but overall this is an enjoyable adventure to play when you have a few friends over.