I almost entirely missed the boat on the Castlevania series. Being stuck with the British microcomputers meant a wealth of console games went completely under my radar. It’s a good job emulation and the internet helped me cover the gaps but Konami have now opted to release the hefty Castlevania Anniversary Collection to satiate some fans’ bloodlust. 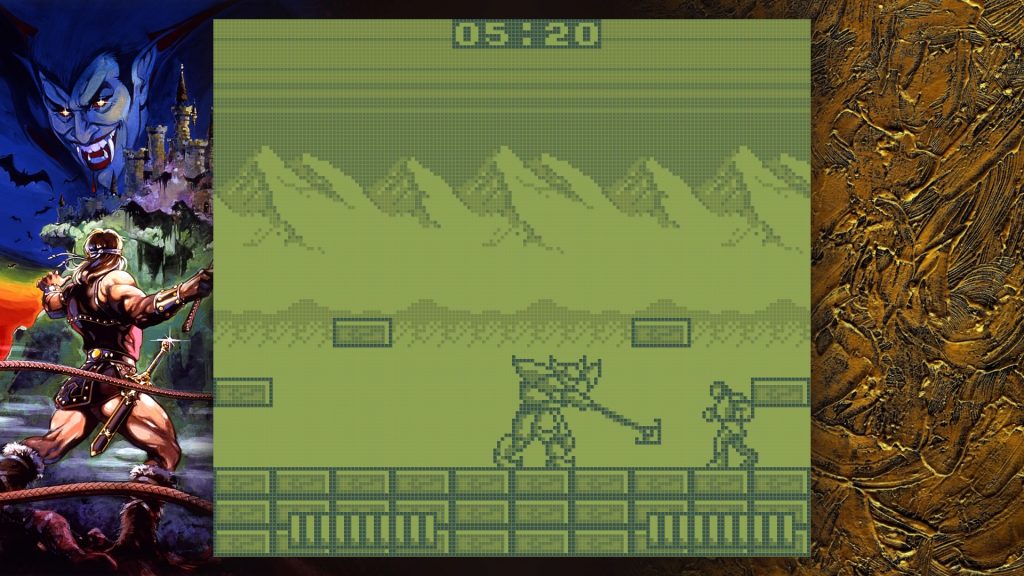 Eight games from the archives are compiled together here. The original Nintendo Entertainment System trilogy is brought together along with Super Castlevania IV, two Castlevania Game Boy games and the previously untranslated Kid Dracula. Castlevania Bloodlines rounds out the selection and, in total, you have four systems emulated under one roof.

M2’s emulation efforts are up to their usual high standard. All eight games are covered accurately which means parity with their original counterparts. This authenticity can come at a price. Castlevania Adventure was Konami’s first attempt at getting some vampire slaying on the humble Game Boy. The game performs a little sluggishly and, if that’s something that always turned you away from playing, it remains here. Preservationists will be happy but anyone hoping for some revisions might be disappointed. 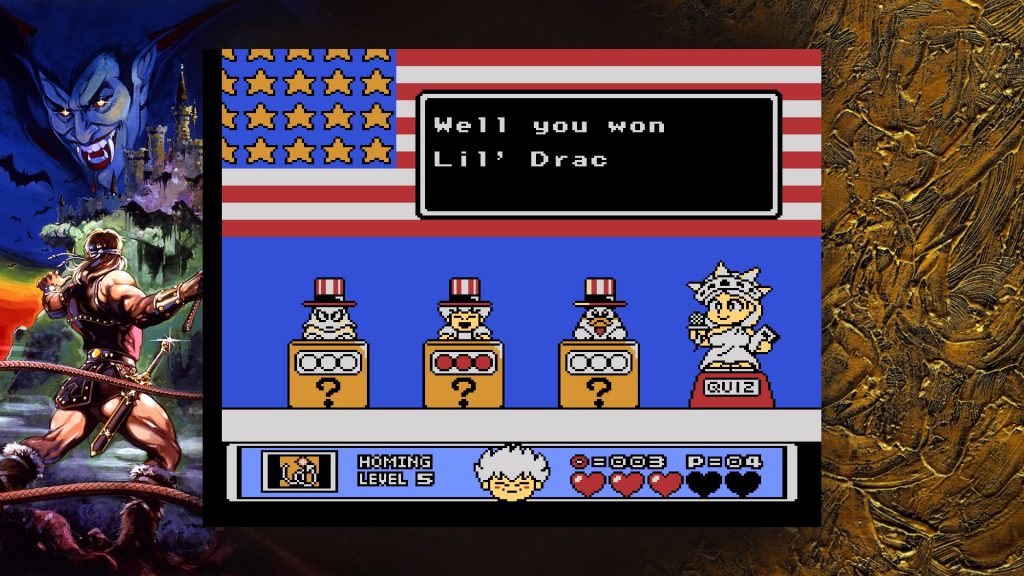 The games cover a diverse set of platforms and very, very little is missed from the series’ first identity as a linear action platformer. It gives you a clear opportunity to view just how the series evolved and progressed across different hardware. With Castlevania Adventure, you see the struggles Konami had with the handheld’s limitations. Screen tearing and a slower, clumsy framerate hinders any real sense of smoothness. On the flipside, Super Castlevania IV and Castlevania Bloodlines show off systems pushed to their limits and making use of new tricks. The latter really tries to experiment with faux-3D effects and reflections in the early stages. The former makes use of Mode 7 to provide some three-dimensional aspects of its own.

In terms of gameplay, all titles remain suitably untouched. That means the platforming and combat are as challenging as you remember it. Castlevania II: Simon’s Quest is still a weird experiment with some genuinely absurd puzzles to hinder your progression whilst Super Castlevania IV looks to add more function to the whip. The handheld efforts certainly feel stripped back with the lack of sub-weapons resulting in a much simpler combat experience. Kid Dracula feels like an odd one out. Tonally, it’s aimed at a younger audience and your main attacks are all magic based. It’s great to finally play that game in English but it certainly feels like a sideshow. 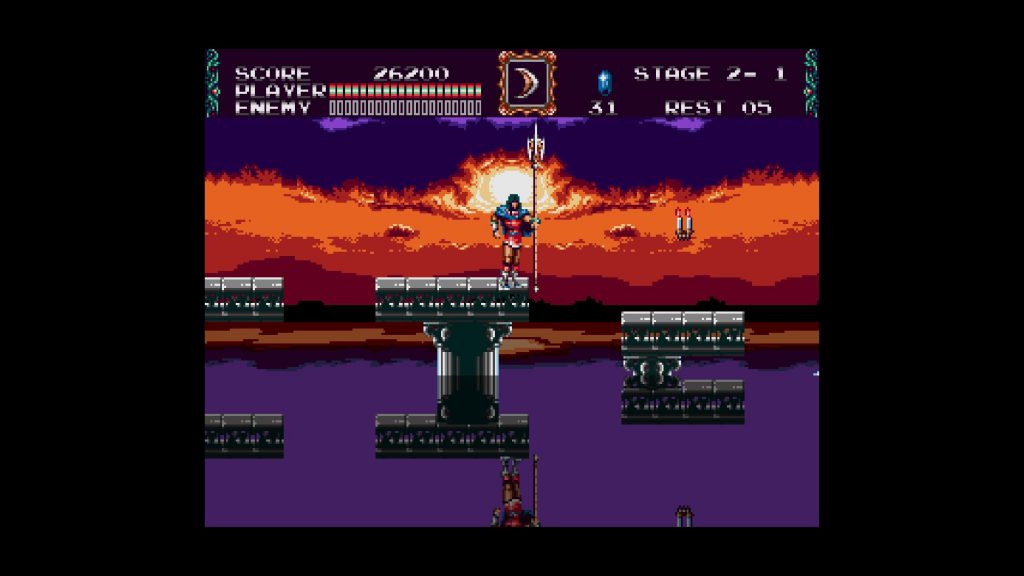 It represents the first time all of these classic games have been delivered in a single package and it’s certainly better for it. There’s a convenience and, dare I say, a little care taken to get these games together. Castlevania‘s a series that’s always had a spotty history when it comes to preservation.

Expect the usual modernities like save states and visual filters to tinker with. They have a pixel perfect option that tries to scale pixels to appear more akin to the original aspect ratio, you have the customary scanlines to add and there’s a rather neat dot matrix filter available for the Game Boy titles. That’s a nice touch that mimics the handheld’s display quite accurately. You can find one that works for you and there’s six in total to fiddle with.

You have frames to add as well. Sadly they don’t offer different selections for each game. You have three in total across the whole collection. It’s a shame and I would’ve preferred something more specific to the game you were playing. Box or concept art would’ve helped give the frames a more individual nature. There’s also a lack of control options. You can’t button map so, if you’re used to B and A being flipped, you’ll need to adjust. Finally, you’re given a replay function which allows you to re-watch a session. This might have some uses for speedrunners but I feel the novelty will wear thin with that feature. 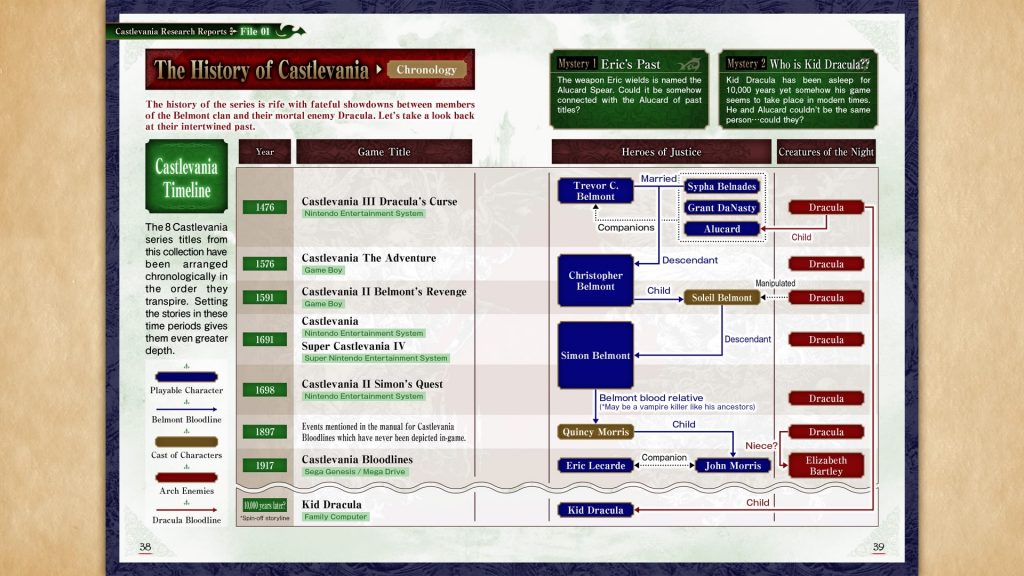 The bonus book provides a mixture of artwork, historical background and interviews to satiate anyone interested in the development of the beloved franchise. It is not as fully featured as the recent SNK and Capcom compilations but it is a step in the right direction for Konami. Some of the text in this booklet has a whiff of direct translation about it. I find it charming but the contents feel like an apetiser rather than a full course.

That said, I think it’s great to see a comprehensive compilation of Castlevania‘s roots. I’m reminded just how fantastic the soundtracks are and how deliberate the controls and gameplay feels. M2 haven’t put a foot wrong in their emulation efforts which will definitely keep purists happy. There’s also plans to add the superior Japanese soundtrack to Castlevania II: Simon’s Quest as DLC.

Castlevania Anniversary Collection
8 Overall
Pros
+ Eight classic games to play.
+ Accurate emulation, for better and worse.
+ A great reminder of how fantastic the series soundtrack has been.
+ Has a decent swath of display options.
Cons
- No options to remap controllers.
- The original version of Castlevania they opted for features audio bugs.
- The bonus book feels a little short.
Summary
Konami rightfully get criticism for not treating their old series' with respect. Castlevania Anniversary Collection does manage to rectify that. Eight fantastic classics are under one roof and, whilst the bonus content doesn't go far enough, there's some care to this that I wasn't expecting. M2's efforts have been astounding and fans should go home happy with this accurately recreated effort.