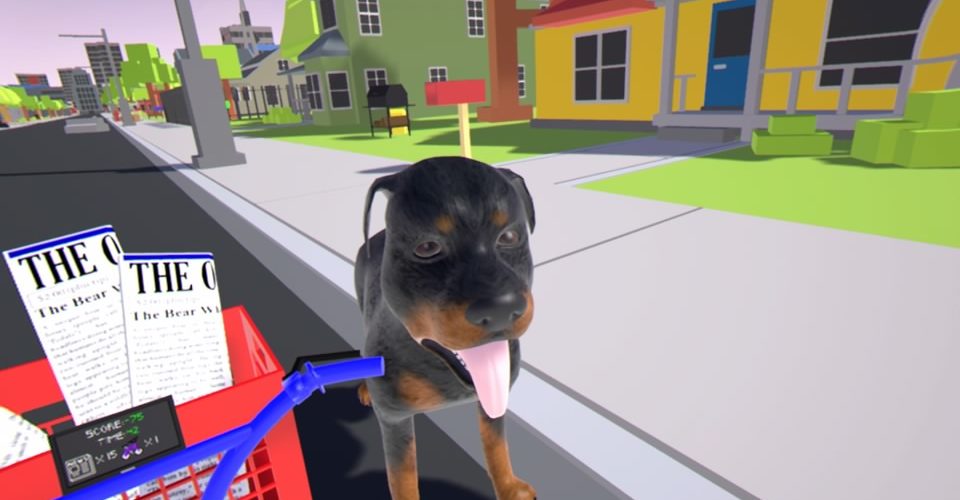 While I never had much time in the Eighties, I ended up rather liking Paperboy decades later when it was ported to Xbox Live Arcade.  After more hours than it should have taken, I completed a full week on the game and I found the whole challenge pretty rewarding in the end.

It turns out I wasn’t the only fan as Meerkat games have taken the previously isometric viewed action and put you in the eyes of the paperboy himself thanks to PSVR.  While the viewpoint on Special Delivery is entirely different, the gameplay is quite similar to the old coin op classic in that you start at one end of a street and have a list of houses that you have to deliver a newspaper to.  You traverse the street on a bike and you don’t get off of it, which means that the newspapers have to be thrown at the houses rather than posted into mailboxes. 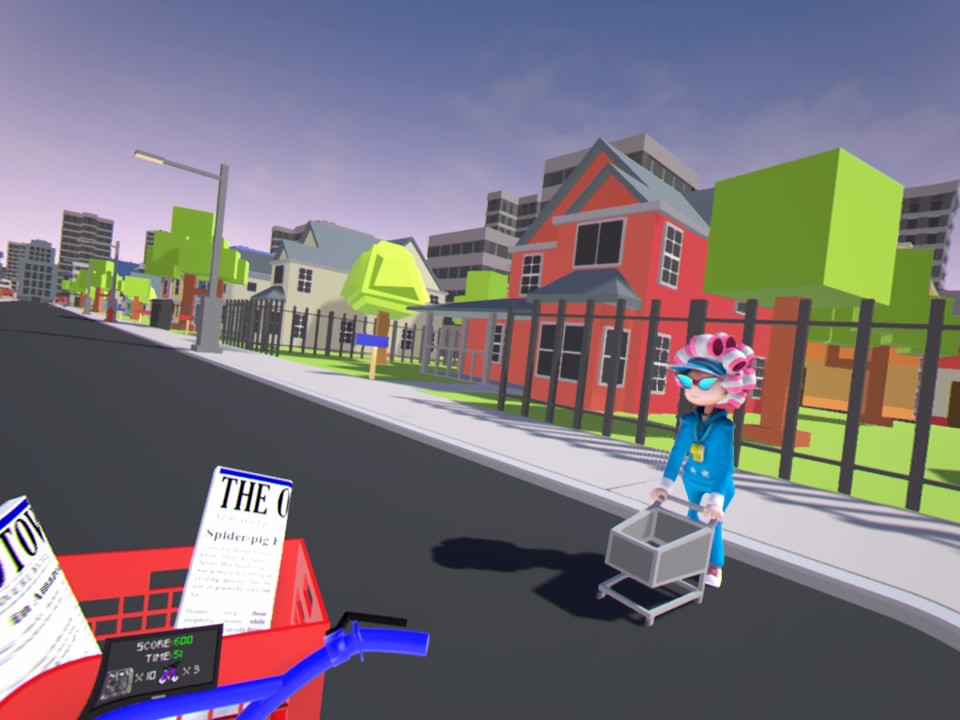 Pedalling is automatic.  You can slow the bike down, using the bike’s very unresponsive brakes, and you steer by leaning your head.  The default steering sensitivity is awful (and would have led to some seriously bad reviews if anyone had taken the time to review the game) but you can fix this thanks to the options menu, even if the menu itself isn’t particularly well designed.  I recommend maxing the sensitivity out even if the game does warn you that this may come at the cost of some motion sickness.

As you pedal along the street, you’ll pass houses on both sides of the road.  To deliver a paper you just look at the house and press the trigger button on your joypad.  It’s not very precise.  In fact it’s not precise at all but the game is pretty forgiving when it comes to counting deliveries as successful.  Move controllers can be used as handlebars, giving you an alternative way to control the game which is welcome but using them is a little tiring and aiming your papers is barely possible so I ended up sticking with the DualShock 4 which, at best, felt like the lesser of two evils. 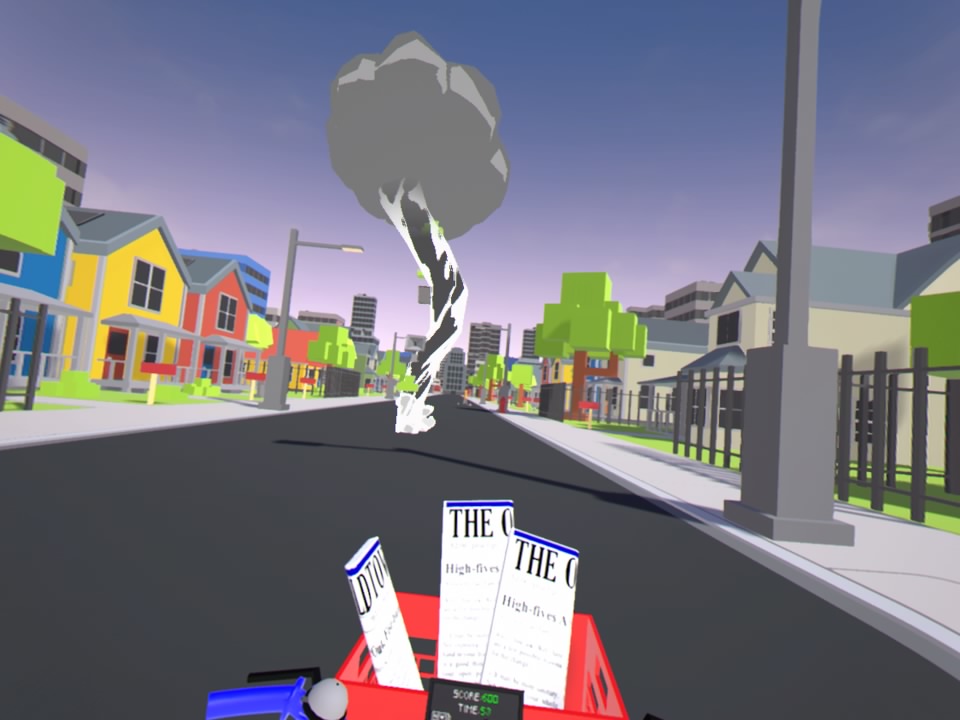 As with Paperboy, the road (and pavement) ahead is full of obstacles.  Cars come along to run you over, people step out in the road, dogs attack you and even the weather can cause problems.  The bike is neither fast enough or responsive enough to let you avoid everything, and death can come from directions you can’t look in, so memorising the course becomes a requirement.  That said, this was also the case with Paperboy when you got further in the game so that’s fine but it may not suit players looking for a more twitchy, reactive experience.

Each run counts as a day and with each new day more obstacles are added.  Complete a week and the course is extended, requiring you to deliver to more houses and face more dangers.  Beyond that though there isn’t much else to the game.  We’d have liked to have seen the post-urban area target range from Paperboy or something similar but what content there is here does just about enough to qualify the game as a VR version of the arcade game.  Instead all you get is a pointless bridge between areas that feels like dead gameplay time. 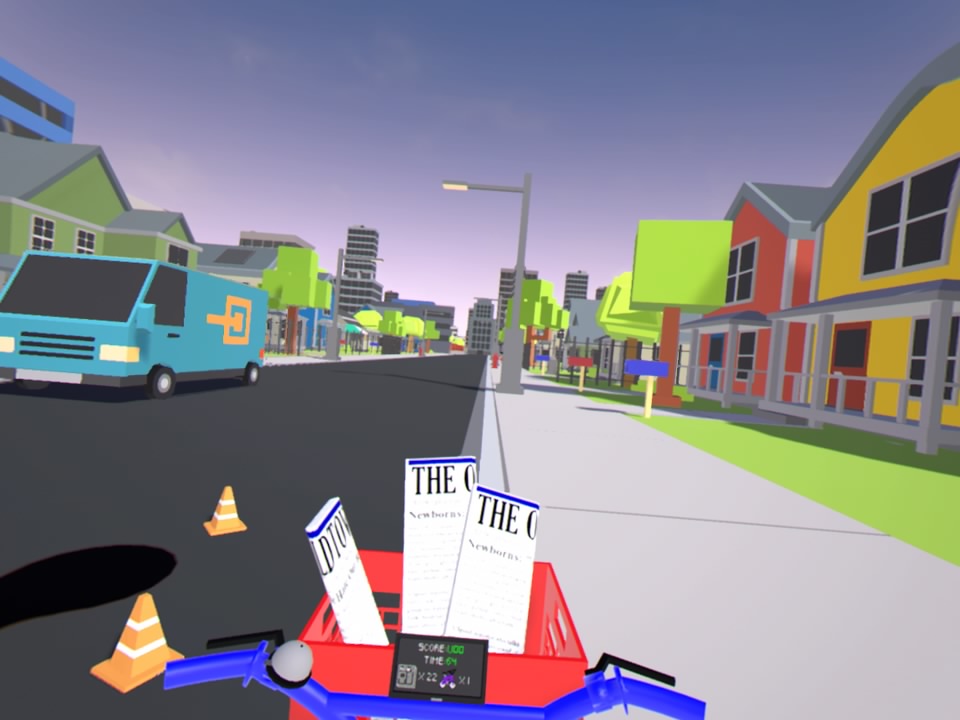 Visually the game looks okay.  Adopting a colourful, blocky look the graphics are functional but not unattractive.  The PSVR headset is used well enough and gives you enough of a feeling of being there that you’ll find yourself occasionally diving out of the way of various dangers.  It’s not spectacular and isn’t the game you’ll load up to show off the tech to your mates but it’s passable.  Which is kind of how we feel about the gameplay itself.

Ultimately, Special Delivery sets out to do one thing and it achieves it but we couldn’t help thinking that we’d rather they just ported Paperboy to PSN.  This is an okay VR take on the game but it just isn’t inventive enough, or exciting enough, to hold our attention for long and the controls really do hold it back from being as much fun as it should be.

Special Delivery
5 Overall
Pros
+ Evokes some of those Paperboy memories
+ Steering through obstacles can be fun
+ Is reasonably playable (with some tweaking)
+ VR conveys a good feeling of being there
Cons
- Controls always feel like a struggle
- Aiming your papers feels very random
- Move controls are particularly tough to get on with
- Is all a bit slow
- Graphics lack detail
- Pretty repetitive gameplay
Summary
Special Delivery is a VR take on the old arcade game Paperboy and it succeeds in recreating some of that old school gameplay. However, control issues, a serious lack of variation and sluggish pace stop the game from being as fun or exciting as it should be.