Spacewing War is a very old-school horizontally-scrolling shoot ’em up from Spanish studio Pneuma Games (although essentially a one-man project).  It’s very much modelled on the aesthetics and feel of the original Game Boy which means four colours, basic controls and some beepy sound.

After a few static screens of plot, you’re thrown into a quick tutorial that explains the controls.  Movement is on the left stick/d-pad while

can both be used for firing and

handles weapon switching.  It’s standard stuff and pretty soon you’ll be flying through those unfriendly skies shooting enemies.  You then get seven levels to play through, each split into five or so stages.  Get to the end of a level and you’ll face off against a boss.  Again, pretty standard game design. 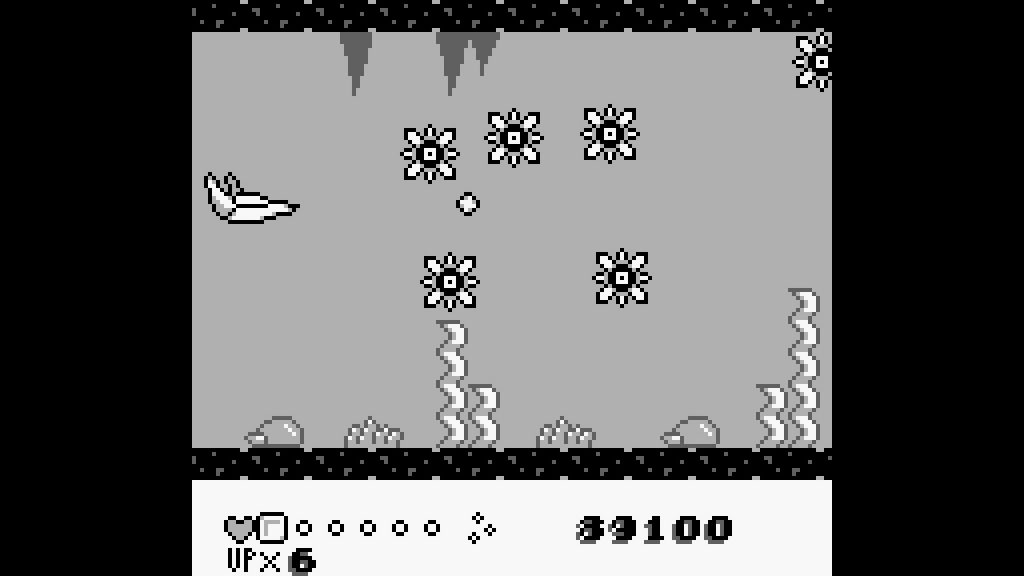 So here’s the thing.  Spacewing War is a game with some serious issues but also one that seemingly achieves everything it sets out to do.  Rather than break it down section by section (gameplay, visuals, sound, overall criticism), we’ll just describe our experience with it chronologically as Spacewing War does take you on a bit of a journey.

Initially you’ll notice the music which is kind of awful.  A Game Boy style chiptune dirge with bass that sounded out of tune and a loop length that made us dive into the menus to turn its volume down.  The sound effects weren’t much better with a scratchy shooting sound that soon began to feel torturous while also giving the impression that you’re spitting your bullets out rather than shooting them.

Then you’ll realise that, yes, they really are committed to the Game Boy style visuals.  I mean this is a Game Boy screen down to the four shades of grey and the same pixel size and count (from what we could tell).  Does it look like a Game Boy game?  Yes, very much so.  Should PS5 games look like a handheld console from 1989?  We’re not so sure.  There are 50 different palette options but the majority of these are garish and actively make the game less clear, so we ended up reverting back to the original choice. 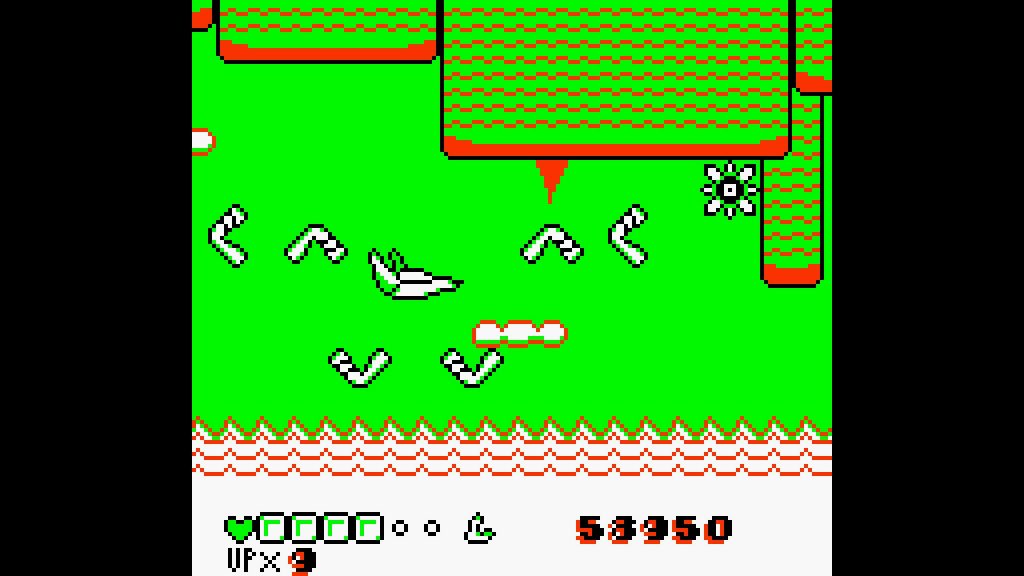 Getting into the gameplay, the chunky pixels mean that your ship is larger than it’d be on a modern shoot ’em up.  Movement is reasonably smooth though and so everything is quite playable from the off.  You get four weapon types – a basic shot, a shorter shot-gun style spray, a weird New Zealand Story boomerang and a slow-firing bomb – and you can switch through these at will.    Your weapons do feel a little bit weak and unsatisfying to use, mainly thanks to the weedy sound but also because a lot of enemies end up taking more than one shot to down them.

A real criticism though is that any difficulty we experienced didn’t come from the enemy ships.  They’re not really there in large enough numbers to cause problems and there are no well-designed gameplay sections where you truly need skill to beat them.  Likewise, the bosses barely offer any resistance either.  Just switch to your bomb weapon and they’ll drop pretty quickly.

The game doesn’t explain things very well but you have a stock of lives and for each life a stock of hearts.  Hearts act as your energy bar.  Take a hit and you’ll lose a heart.  There are plenty of them lying around though so you’ll likely spend most of the first half of the game at peak energy. 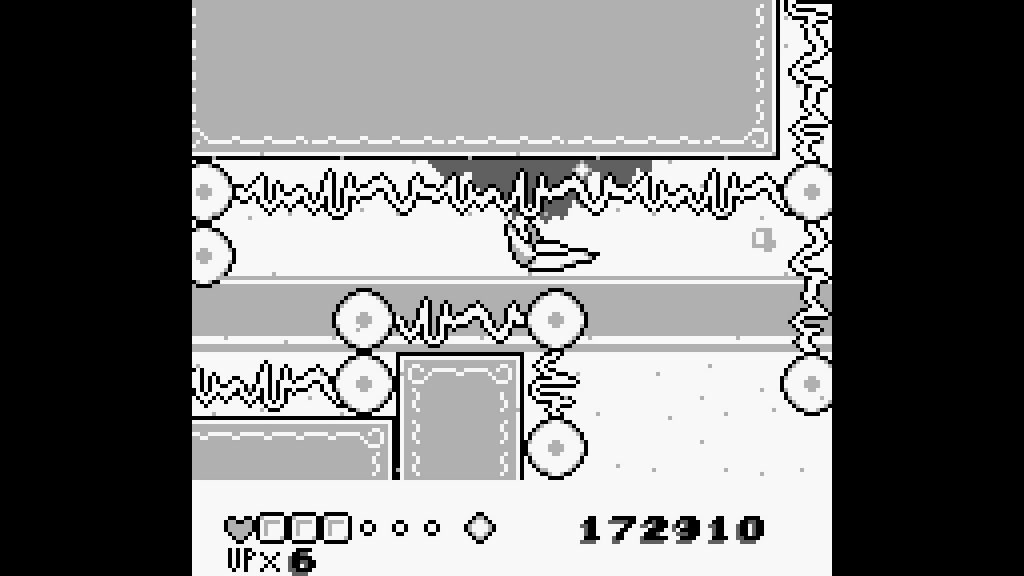 The only real challenge comes from the environment.  Like we said, your ship is chunky and when the levels get a bit busier, things do get a little harder.  An environmental crash won’t take a heart though, it’ll take a whole life.  And this is made a lot harder by the game’s limited colour scheme.  You see, the issue is that often you can’t tell what’ll kill you and what’s in the background.  And also, the game occasionally offers you choices that can lead you into dead ends.

After six levels of this, we were feeling a little let down by Spacewing War.  The Game Boy aesthetic, while very authentic, felt beyond dated even in this age of 8 and 16-bit retro-styled offerings that we seem to review all the time.  The question is, would this have been a great Game Boy game back in the day and the answer is probably no.  Well, it’d be good but certainly not an essential purchase back then.

The game’s final level does mix things up a little by overpowering your ship and throwing in a big burst of colour.  It compliments this by throwing in a lot more enemies.  This was definitely the most fun part of the whole campaign with it feeling a lot more satisfying as you blast dozens of enemies out of the sky at any given time.  The boss, like all the bosses, fell pretty quickly though. 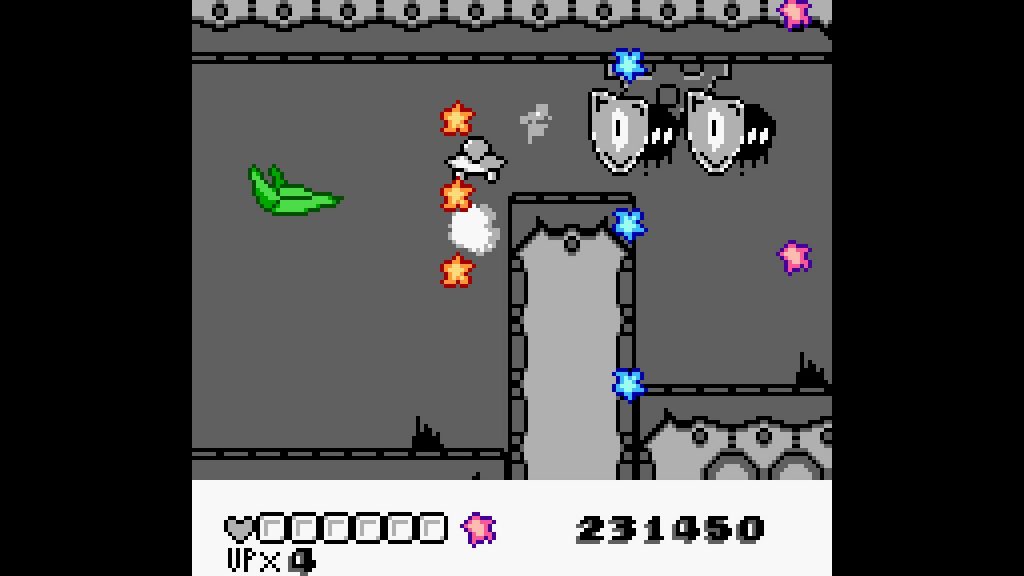 And then it was all over.  Game finished and on our very first attempt (not a good look for a game at all) and we were wondering just how hard we were going to batter the game.  But then we were surprised that a whole new game mode was unlocked.  Well, two actually but one of those was just a harder mode.  The cool thing was the UFO mode where you play as a little flying saucer.  It’s essentially still the same game but now without the auto-scrolling.  Instead you’ve got directional horizontal push-scrolling and a different weapon system where you build up battery charge by killing enemies and then can fire off a super power such as a laser, health boost or smart bomb.

The game’s primary audience might not even care as they’ll have rinsed the game for a platinum trophy by then but we were quite impressed.  It’s still just more Game Boy style shooting but we thought it was quite a nice little add-on.  It’s still not enough for us to be able to recommend the game.  I mean, any game that you can beat on your first go is fundamentally flawed and when you combine that with production values that are over three decades out of date, it’s a tough sell.

Spacewing War
4 Overall
Pros
+ Authentically retro
+ Additional modes are welcome
Cons
- Visuals create confusion
- We finished it on our first go
- Level design is uninspiring
Summary
Spacewing War does a good job of pretending to be a Game Boy shoot 'em up but its low-fi approach, weak level design and complete lack of challenge make it a tough sell even if the extended content does give it some extra value.