It’s been out on PC for some time but Lost Ruins now lands on PS4. The pixel graphics and school girl protagonist might lead you to believe that this is a cutesy platformer but that is not the case. 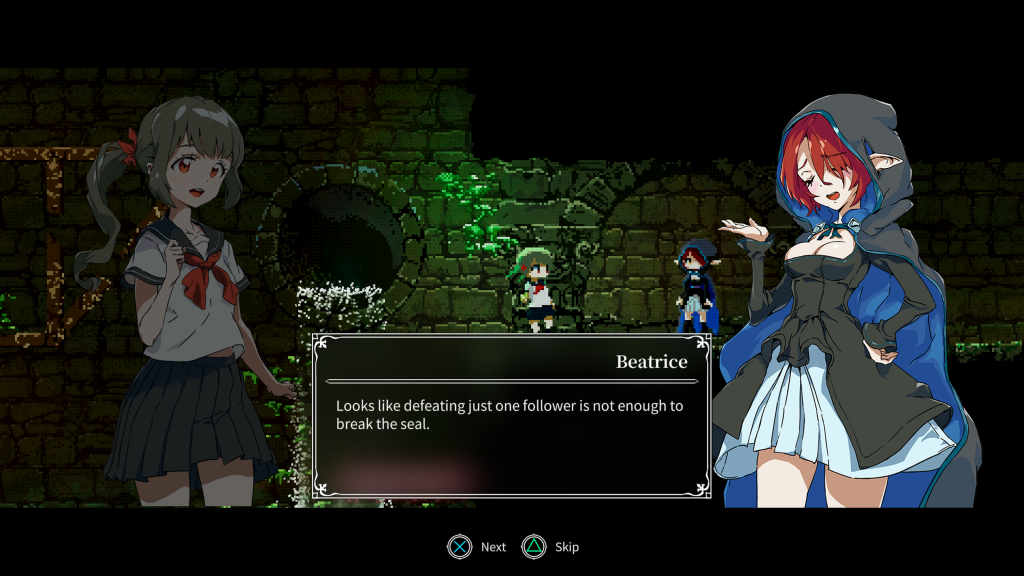 You play as a girl simply known as Heroine, who wakes in a dungeon with no memory. You encounter Beatrice shortly afterwards who tells you to defeat followers of the Dark Lady to get your memory back whilst also stopping them from summoning the big bad in the process. There is a bit of chatting as you encounter bosses and NPCs but the story isn’t the draw here, though there are multiple endings.

The gameplay is where Lost Ruins will either grab or lose you. The basics are quite simple. You run around a 2D world, doing a bit of jumping, killing enemies who get in your way and then defeating a boss at the end of each section. A Metroidvania style map draws in as you explore and you can teleport between set areas once you’ve found them but this isn’t a true Metroidvania in that you won’t be unlocking powers to access new areas but there is a sense of exploration with some secret areas and doors locked behind puzzles or requiring keys. 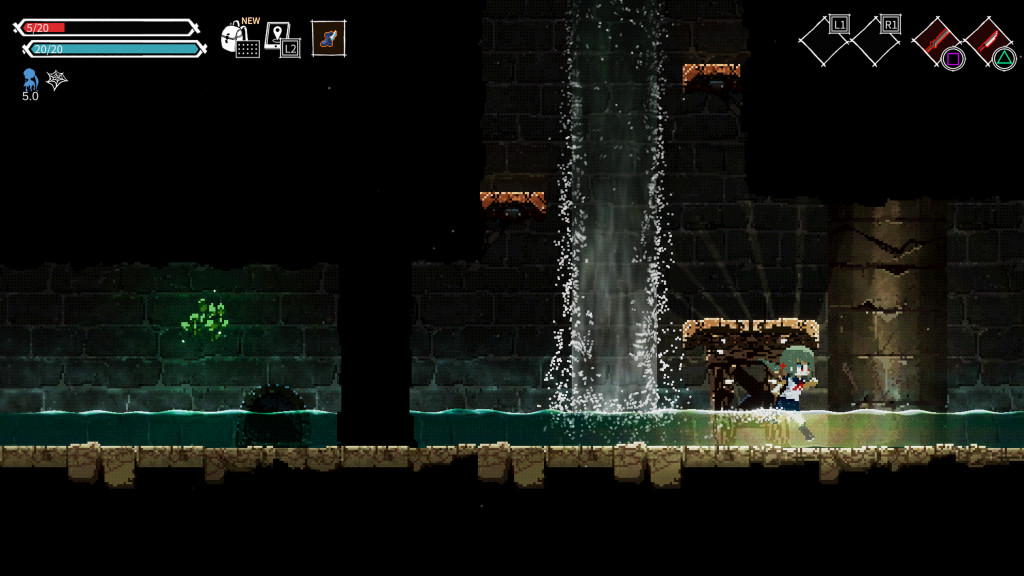 In each area you can get new equipment whether by finding it or buying it from venders. These come in the form of weapons, magic, equipment and artefacts. Artefacts are passive buffs that automatically apply and usually drop from bosses but the rest come in a wide variety that can really change up your playstyle. You can have two weapons equipped at once, two spells and, initially at least, one piece of equipment which will give you different passive bonuses.

Weapons have different ranges, attack power and speed which will really influence how you play and can offer their own passive buffs and debuffs. Spells have different elemental affinities and effects and interact with the environment too. If there’s oil on the ground then fire will set it alight, electricity and ice will carry through water and what have you. Naturally these are also hazardous to you but if you’re aware and able you can use these effects to your advantage. 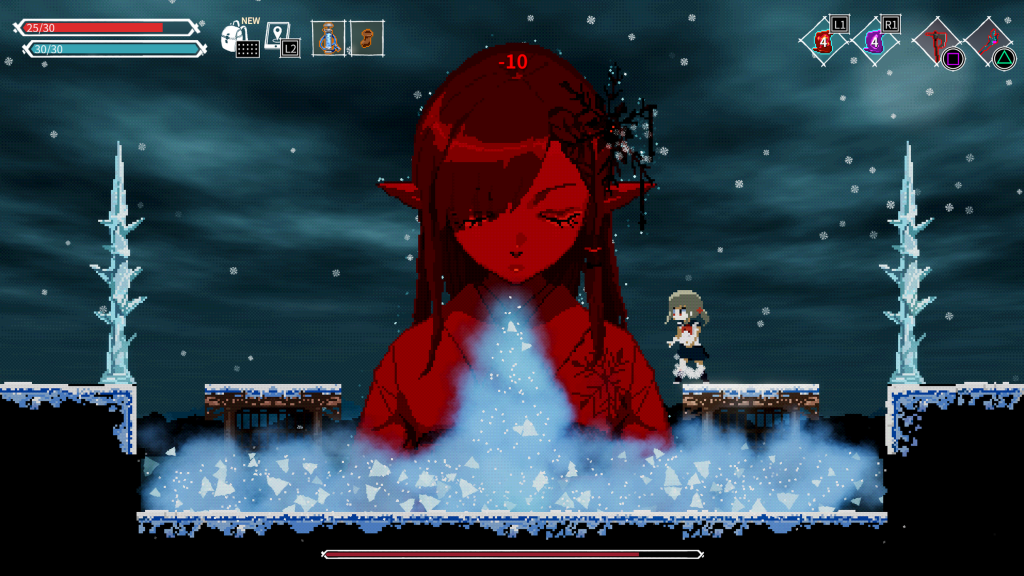 There are lots of different elements at play in Lost Ruins but they don’t all blend perfectly. If you want to change up your loadout the menus can be quite clumsy and slow to work through. Similarly you have quite a small pool of health and mana and you have to go into the menus to use replenishing items which are just in a big list, some categories or shortcuts would be helpful. The basic combat is also quite clunky, with very stilted attacks and even the fastest weapons aren’t that fast or smooth to use. You can dodge roll which has invincibility but there’s a recovery time on everything that stops this from being a true action game. It feels intentionally that way and you can adjust to it but there are times when I’d have liked it to be a little tighter.

With that adjustment period things can be quite tricky. Enemies can be quick and combined with your slow attacks it doesn’t take much to drain your health, you can even be juggled to death. To counter this checkpoints tend to be quite close together. There are full blown save stations as well, but in between those are statues that will create an autosave. Things can be difficult but you won’t need to complete long sections of gameplay between saves which is a decent balance. 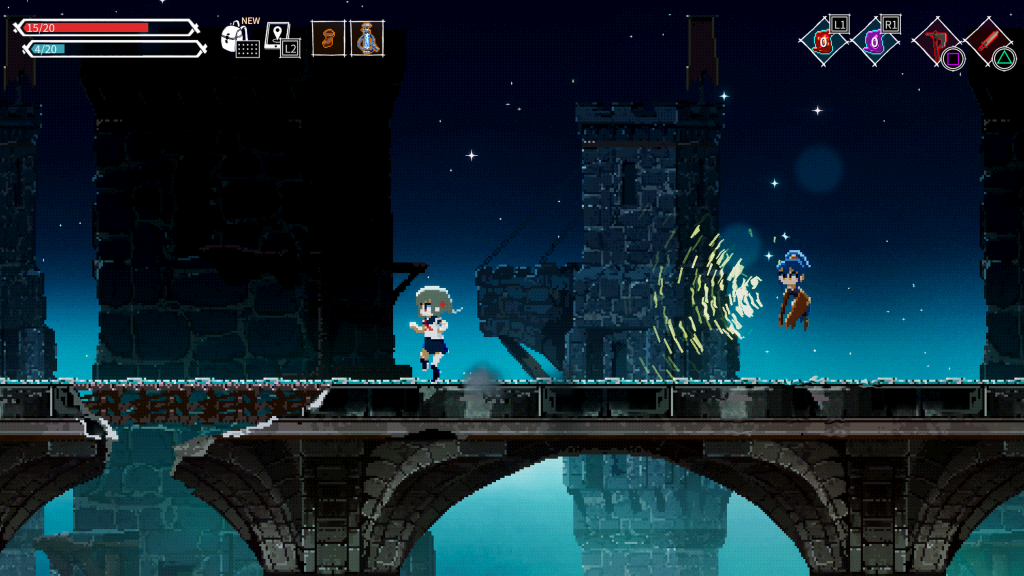 The game isn’t overly long either. Initially I thought it was going to be incredibly short as I hit the 33% map completion almost as soon as I started but that slowed down a little as I progressed. There are multiple difficulties to try and once you’ve beaten the game you unlock more modes. There’s a mode which stops you from using magic, another where you can only use magic and, more interestingly, a boss mode. This isn’t a boss rush as you might think but you actually get to play as three of the bosses through the same environments with their own story. It basically equates to having three set loadouts that you can switch between on the fly but it does change up the gameplay a little in that you can access some stuff earlier than you can in the normal game thanks to the boss abilities.

Visually it’s quite attractive. The characters and enemies are made of pixelated 2D sprites but there can be some nice lighting and effects happening throughout. Bosses tend to be quite large more often than not so have more detail than your character and the normal enemies but at no point is it ever ugly looking. When you talk to people there are hand drawn portraits which are very well done and work as a more detailed version of the pixel artwork. Some of the music is also really good if not that memorable. 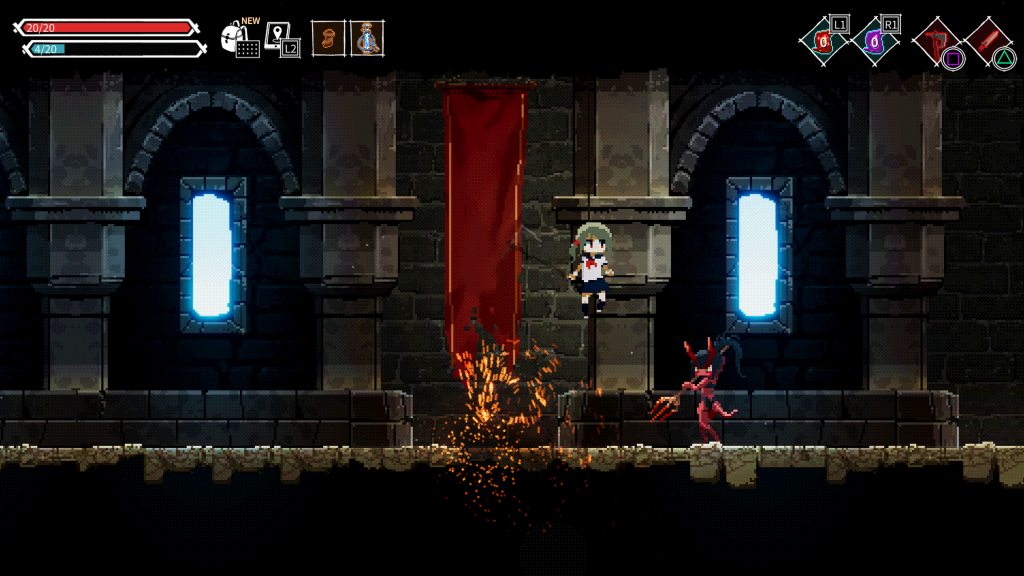 Lost Ruins is a hard game to recommend wholeheartedly however. There are lots of cool ideas and at most levels it’s very competent but not everything meshes perfectly and not every type of player will give it the time needed to fully get to grips with it. Others will experiment with loadouts and push the game to its limits and embrace the Hardcore mode (where death means game over). If you think you’ll enjoy the mechanics and look past the shortcomings then by all means give it a try but if the negatives I’ve mentioned sound irritating then Lost Ruins may not be for you.

Lost Ruins
7 Overall
Pros
+ Lots of mechanics to interact with
+ New modes unlock upon completion
+ Some nice visuals
Cons
- The inventory is a necessary chore
- Combat is intentionally clunky
Summary
Lost Ruins has a lot of mechanics under the hood for you to play with but they aren't all implemented in the most enjoyable way. Exploring and playing with a variety of possible loadouts is where the fun is and although the campaign isn't that long the different difficulties, multiple endings and unlockable game modes give you plenty more content if you want it.