Both games are horizontally-scrolling shoot ’em ups in the old school tradition, borrowing classic gameplay mechanics as well as a 16-bit console aesthetic.  A Star Wars-esque text scroll explains the paper-thin plot and then its into the gameplay.   So, let’s start off with the first game.  As expected, you control your ship using the d-pad/left analog stick.

fires your primary gun and

shoots off your secondary weapon which is by default a missile.

Enemies swoop in from the right hand side of the screen (and occasionally from above, below and behind) and its your job to dispatch them before they damage you.  Again, straightforward shoot ’em stuff.  Defeated foes will drop coins which can be used for upgrading your ship and weapons, more on that in a bit, and at the end of each stage you’ll face off against a boss.  It’s absolutely what you’d expect from a shoot ’em up.  There’s no environmental hazards, no clever R-Type 3 circling and direction changes and no set-pieces. 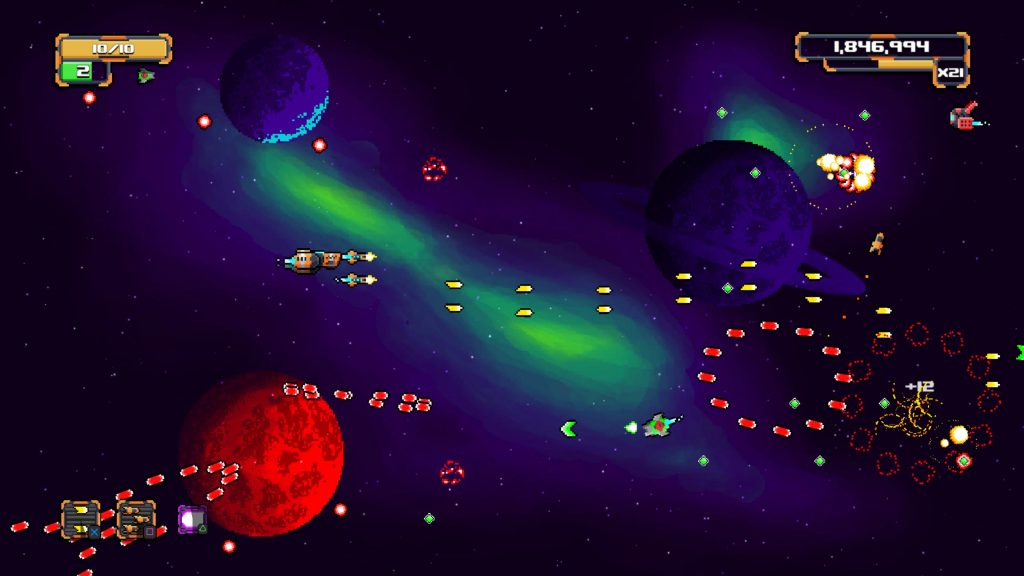 However, the game is quite enjoyable.  The pace feels right, the controls are solid and the movement of all the sprites is smooth and fast, giving you the feeling that a 16-bit console back in the 1990s may not have handled it quite so nicely as your PS4 does.  But there’s certainly no real spectacle to things, no incredible environments or impressive bosses.  For us, shoot ’ems up either need to be drop-dead gorgeous (Soldner X II, Gradius V, R-Type Leo) or just really fun to play ( like almost anything by Cave).

Usually some sweet upgrade action is enough for us to enjoy a shoot ’em up though and Space Elite Force gets that stuff half right.  You can upgrade you main gun and even convert it into a laser, plasma or machine gun.  You can also upgrade your secondary, which increases the number of missiles and adds a homing ability.  You can also switch that to a sort of swarm of killer bees or a mine system.

Your ship can also be upgraded, adding health, resistance to bullets/lasers and even improving the number and frequency of power-up drops during the game (this is useful as you can get coin magnets, 2x bonuses to money collected, orbital shields and temporarily improved firepower).  This is all good as cash is really the key to maxing out your upgrades and, beyond completing theses games, all the trophies are mainly about maxing out your gear.  So if you’re in it for the Platinum, you’ll want to collect as much money as possible. 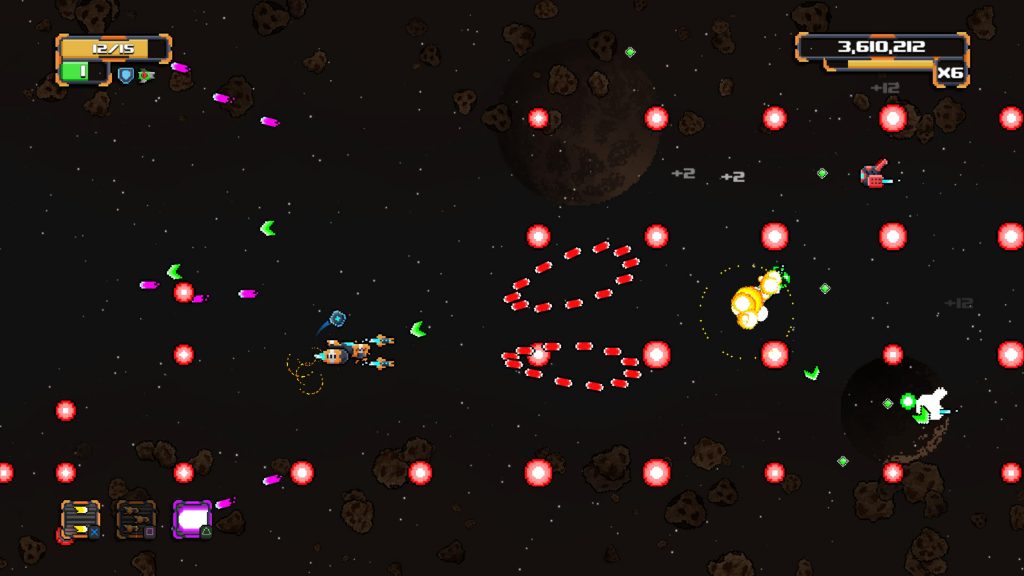 There’s a problem though and it’s so blatantly obvious that we’re convinced it’s a genuine design choice.  Your main gun, no matter how well upgraded, is pretty weak against bosses.  Your basic missile attack however is a complete boss-melter.  So once you’ve upgraded that to fire three homing missiles, killing bosses is easy.  Barely an inconvenience.  The problem is that it’s also really good at killing basic enemies.  So basically, if you want to finish Space Elite Force, just hold down

.  It makes the game just far too easy.

Switching over to Space Elite Force II, you’d expect some improvements and there are a few.  You now get slightly better graphics, an increase in levels (from the first game’s seven up to now having fourteen) and an extra primary and secondary weapon to try out.  There are also some internal corridor bits on the levels (like R-Type, where you now get the occasional obstacle to avoid and a few mounted guns).  You also get a ‘special’ weapon too (that uses 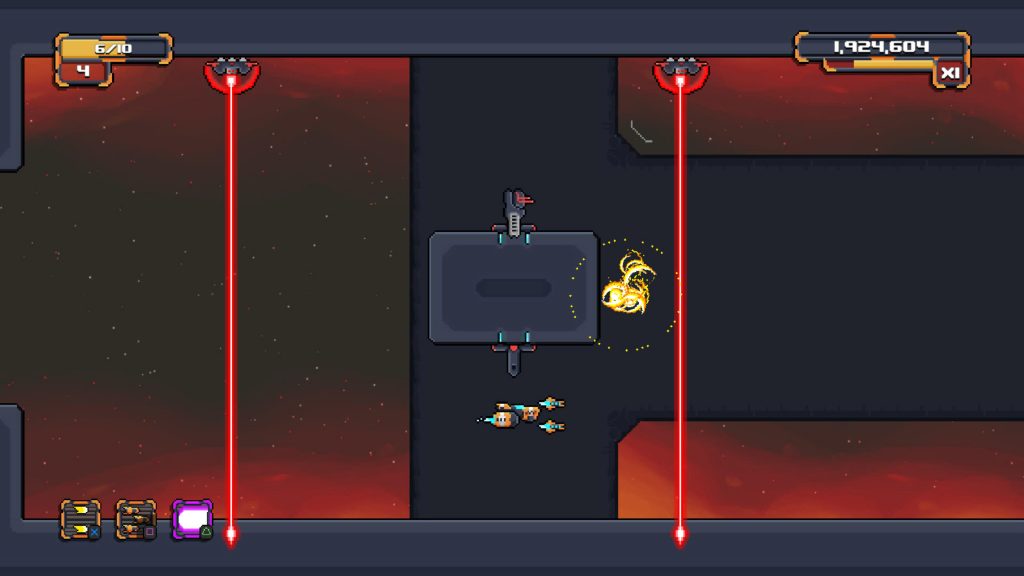 However, while the sequel is still enjoyable and fun to play, the missile is still just as overpowered and the corridor bits are too sparsely populated to be interesting.  Aside from one bit on a boss battle, I don’t even remember dying which meant that I complete both games at the first time of asking.  The second game also has a Boss Rush mode but this just highlights how ridiculous the missile attack is as I was able to get through the whole thing just holding

and then occasionally firing off my big laser special weapon.

So really, it’s a bit of a tough one to review.  We enjoyed it and it kept us engaged for a few hours and then it was over with no real reason to go back.  We had topped the leaderboards on both games, despite not really needing to show off too much skill, and we’d seen everything the game had to offer.  And at the end of it all, all we could think was ‘why did you make the missiles so overpowered?’ 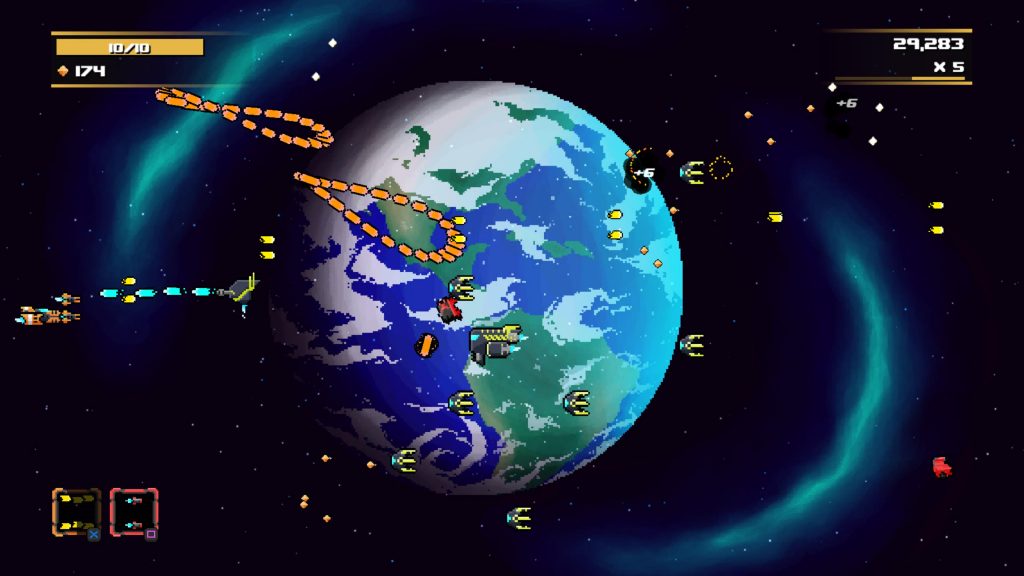 Visually the game uses a chunky-pixeled 16-bit look which is functional rather than interesting.  The action is clear though but we disappointed with the lack of creativity on the enemies and especially the bosses who all just mostly look like big blocks.  The audio fares much better though with some booming sound effects and a good rocking soundtrack.

So, look.  If you love shoot ’em ups and don’t fancy being challenged, this is fun enough to play through.  If you want a real challenge, originality or any kind of longevity, this isn’t the one.  It’s never bad but it’s never great either.  But, we enjoyed it.  Well, sort of.   It’s better than the usual easy Platinum fodder that we get in the shoot ’em up genre but its a far cry from some of the great alternatives that you can find on PSN.

Space Elite Force 2 in 1
6 Overall
Pros
+ Good controls and gameplay
+ Clean visuals
+ Good upgrades
+ Two games in one
Cons
- One weapon makes it too easy
- Not very original
- Weak bosses and no real spectacle
Summary
Space Elite Force 2 in 1 offers up two basic shooters with some nice upgrade mechanics and clean retro presentation but it's easy to the point of being trivial.