Hindsight 20/20: The Wrath of the Raakshasa is a hack and slasher from Triple-I games, a studio founded by ex-Bioware and Sucker Punch devs.  With that kind of pedigree, you’ll be expecting something a little better than the usual indie tat that we’ve been subjected to recently on PSN and in some ways Hindsight (let’s call it that rather than its clumsy, barely-pronounceable actual title) is quite unique.

You play as Jehan, a one-armed warrior who left his homeland of Champaner following the execution of his father, the suicide of his best friend, a weird outbreak that turns people into bloodthirsty monsters and the destruction of the town by Sinha, a former Champaner hero who leads those monsters, now known as the Raakshasa.  Sinha became unstoppable after he created a weapon called the Trishakti.  However, rather than regret his life choices, Jehan is given the chance to go back and make things right.  Hence, Hindsight.  This is a game where your choices matter and a game that expects you to replay it knowing what the results of those choices will be. 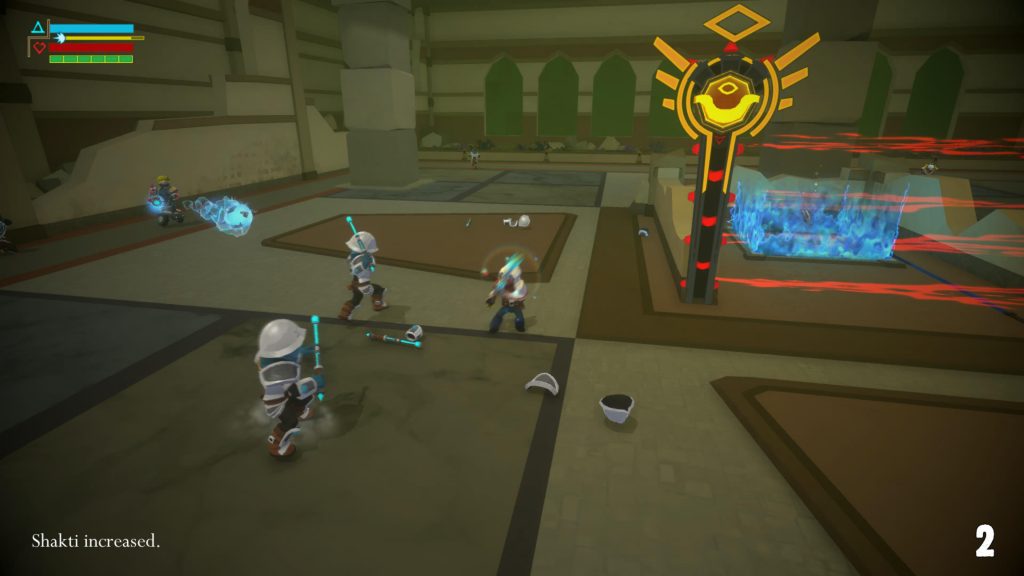 This all plays out via the game’s main mix of hack and slash battles and puzzle sections.  The combat offers you your first main choice as you have two weapons, a red sword or a blue baton.  The sword offers your enemies a bloody death while the baton will stun enemies and incapacitate them but, importantly, will not kill them.  Champaner is a progressive place and one that does not believe in killing and violence and so you’ll lose the support of the townsfolk if you keep killing people.  Choose mercy though and even your enemies will commend you on your morals, after you’ve smashed them about the head and neck.

There’s a complexity to the combat.  Fatal sword combat is certainly easier.  It flows better and is more effective.  Stunning enemies is harder, slower and more dangerous.  But in either combat system your aim is to combo three hits, at which point you’ll do some proper damage.  Combo six hits and you’ll kill the next enemy, or incapacitate them.  Along with that you have dash attacks, ranged attacks and specials but these all rely on picking up ‘Shakti’ which are yellow icons dropped by defeated enemies and will fill up a gauge.  It’s not too complicated but it never feels particularly intuitive either.  We’ve tried to put our finger on why but we think maybe it’s just down to the clunky movement of the characters.  The flow often gets interrupted and there’s quite a bit to consider in terms of controls. 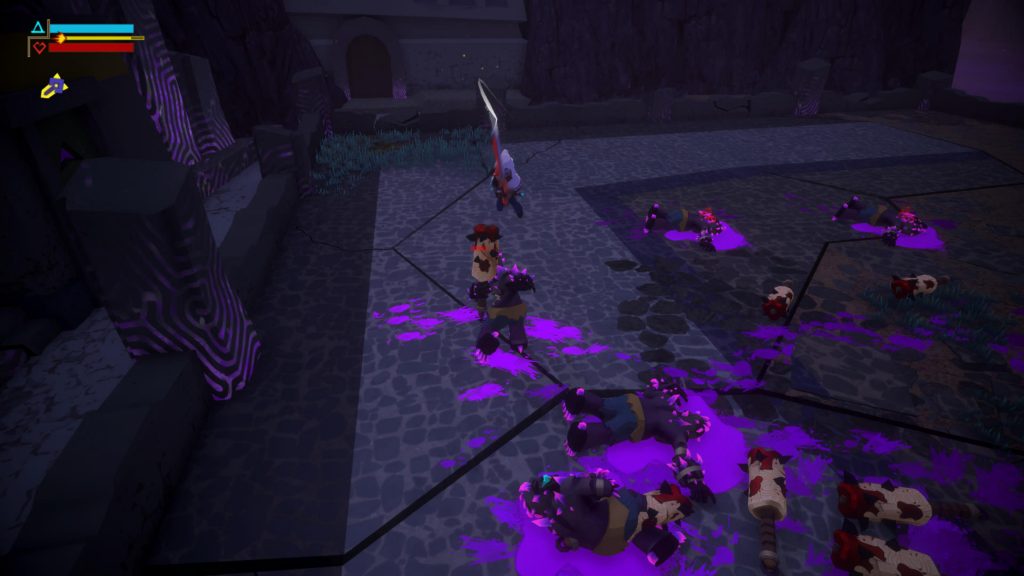 The combat’s okay though but throughout the game’s 5-6 hour lifespan, it does get a little repetitive.  Especially as Hindsight loves to make an area just a series of rooms with enemies teleporting into whatever room you’ve just walked into.  It all feels a little bit unnatural rather than you being able to see your foes and strategise a bit.  For a game all about choice, it’d be nice if you could approach brawls with a bit of freedom rather than what they do here which is to have a very linear game but hide that by having lots of running back and forth getting keys and unlocking doors.  It’s fine but we’ve seen hack and slash done so much better in recent years.

Hindsight likes to throw puzzles at you too but these are generally all just ‘push the block into the right place’ ones.  Most of them are very easy to figure out and if anything don’t really have a point to them rather than just slowing you down before the next battle.  We had one puzzle that we couldn’t figure out so we just tried each coloured block until it worked.  But there’s no brainbusters here and so no real sense of achievement for solving them.  Also, you can only push or pull blocks, you can’t slide them sideways.  It’s no big deal but it adds to the overall feeling of clunkiness that this game suffers from. 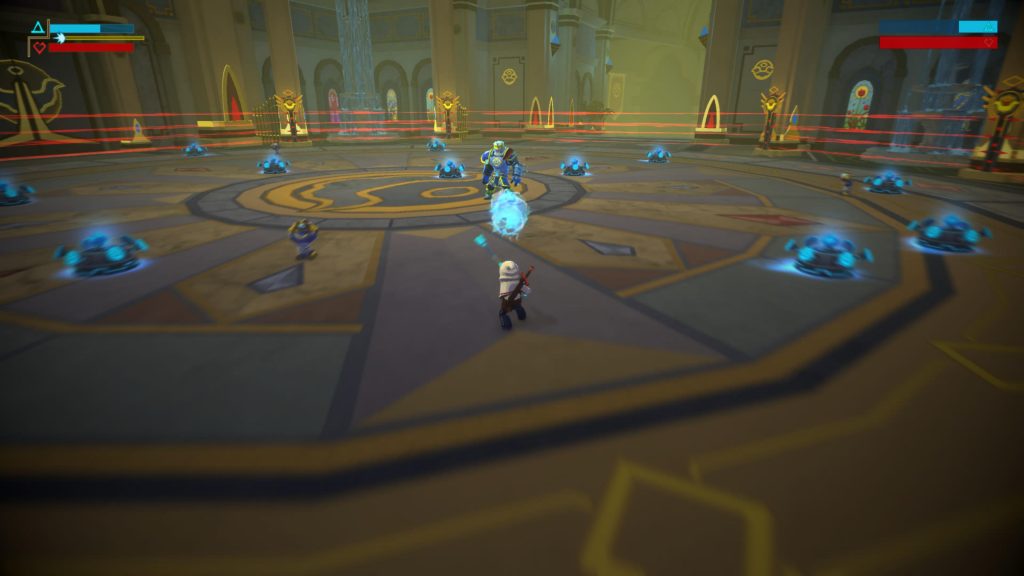 The main thing though, at least according to the press blurb, is the choice the game offers you and this is moderately successful.  You can try to help people and usually there are good reasons to do that and also some for not doing it.  For example, you meet a woman whose children have been taken away.  She insists that this is just an overreaction by the state and she’s desperate to see them again.  However, the guards will tell you that the kids might be infected.  I always go for the good option, so I saved them and yep, sure enough, I ran into her later on and she was a Raakshasa, having been infected by the children.  However, she actually seemed pretty happy with that because at least she had her kids with her.

Where it really got interesting is early on when I faced the man who killed Jehan’s father.  He was respectful and sorry about what happened and quick to point out that I’d slain a load of his soldiers, who were generally happy to fight mercifully.  It did the whole Austin Powers thing of humanising the henchman and indeed the killer and made me choose the baton over the sword for much of the game’s second act.  There are ten possible endings, so these choices do matter.  It might be oversold a little,  and it really depends on how much you care about these characters, but it was certainly different to play a hack and slasher where your hacking and slashing carries something of a moral consequence. 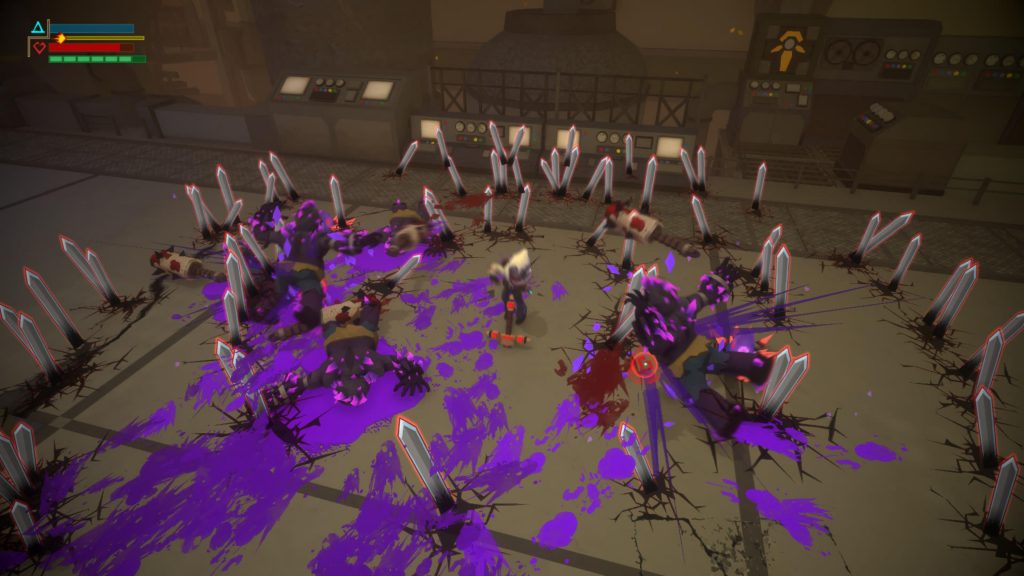 The choice stuff is mildly interesting but where Hindsight comes into its own is how it reflects your morality back at you by showing you aspects of your enemy that you never considered.  Certainly the original of the Raakshasa is very interesting and makes you question why you are doing what you’re doing.  Indeed our first playthrough started with great intentions and ended up giving us the darkest ending imaginable.

Of course, a lot of this only matters if you’re prepared to replay the game and at 5-6 hours, that’s maybe a little long to then start expecting replays.  As we said, there’s a fair bit of repetition with the fights and puzzle types, so you could have easily lost an hour or two which might have encouraged replayability a bit more.  However, once you’ve finished the game, a lot of players won’t find it all that enticing to go back. 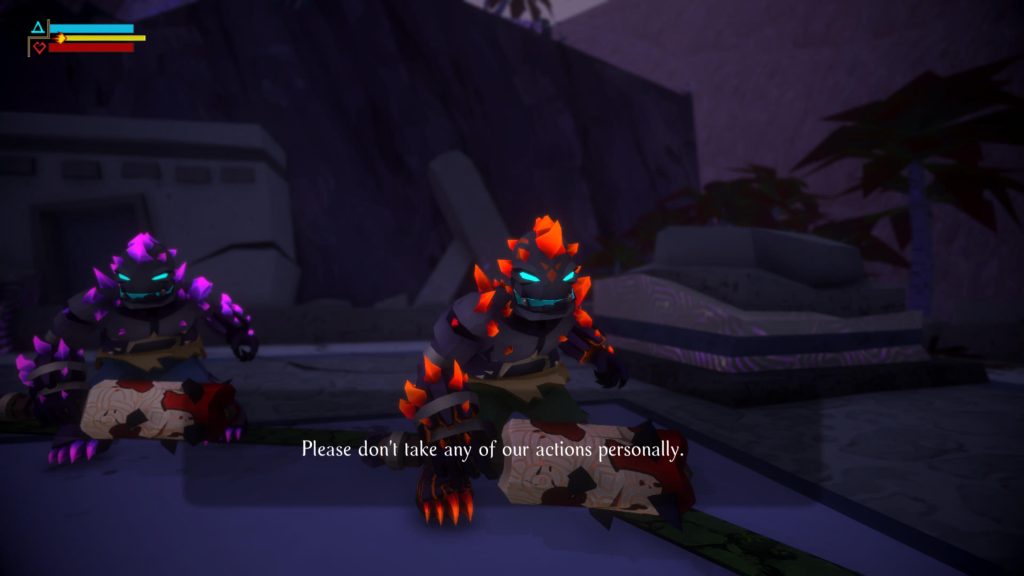 Given the pedigree of those who worked on the game, the presentation is a little bit disappointing.  The environments are very simplistic, although they can be quite large, and the character models have an ugly sheen to them.  Everything has a sort of early 2000s console look to it but as if there was an ugly shadow filter over it.  It’s a shame because there is some character to the game that makes it feel like the game was created with a degree of love but it’s surprisingly ugly, especially when played on a PS5 via a 65 inch screen.  The sound fares a little better with okay music and sound effects but there is no voice acting which again gives the game a bit of a cheaper feel.

So ultimately Hindsight is a tricky one to score.  The story choice stuff and the combat kind of works.  It works more than it doesn’t.  Is it fun?  Kind of.  Is it meaningful?  Yes.  And because of that you can kind of recommend the game, if only as an interesting curio.  5-6 hours isn’t too long but it kind of feels too long, which says something about the game itself and given that the game never really shows you anything all that interesting or impressive, you can’t help feel as those this is a bit of a missed opportunity.  Certainly, if Hindsight had a some lovely flowing combat and graphics that were at least PS3-esque rather than the sort of basic Gamecube style visuals, this could have been a contender.  But for now it’s okay.  Okay combat, okay story, kind of okay puzzles.  Okay?

Hindsight 20/20
6 Overall
Pros
+ Feels like it was made with love
+ Game deals with morality well
+ Reasonably enjoyable to play through
+ Very much encourages replaying
Cons
- Combat is a bit stilted and overly fussy
- Puzzles are weak
- Ugly visuals
Summary
The promise of hack and slash action and real moral choices is an enticing one but Hindsight's combat is a little bit clumsy and the game's sub-par graphics do let it down. The moral choices are kind of interesting though and give the game an added layer of interest and a sense that the game was created with love.