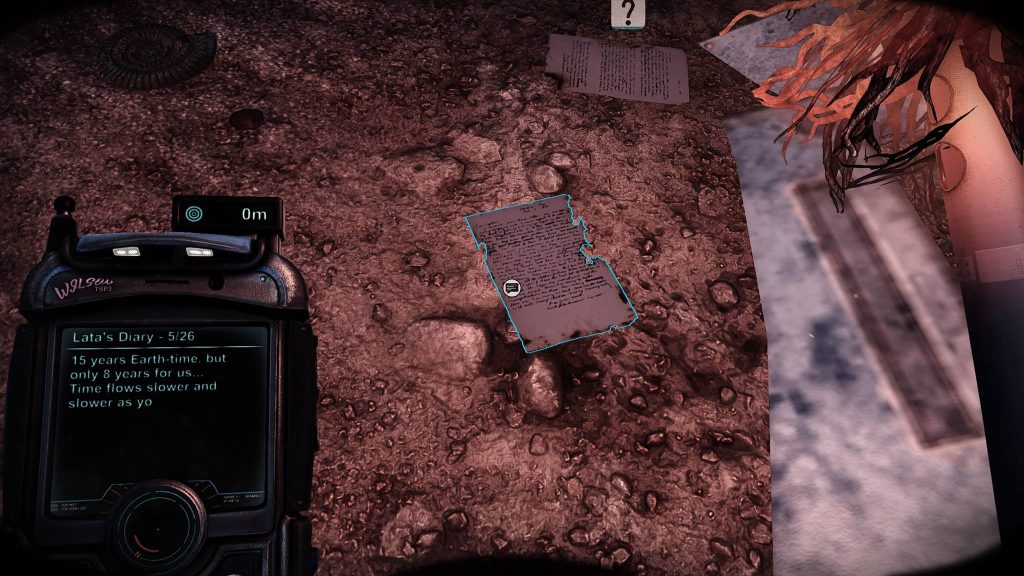 I have a love/hate relationship with survival games. On one hand they can be interesting, with extra considerations taken into mundanities that would otherwise be glossed over in other games in the name of accessibility. On the other hand, they can often be laborious and downright petulant regarding how the game nags at you to keep your character in check. Take No Man’s Sky for example of one game that just keeps bleating at you to constantly keep plates spinning when you would rather be thinking up humorous names for that bulbous dick monster with flippers.

To my mind there is a certain point where a survival game stops being fun due to its core mechanics. Day Z on PC gets laborious when you are sat with a black and white screen while trying to find scraps of rotting tuna to replenish your blood meter, Far Cry 2 suffered from the bullish Malaria mechanic as another example. But there is something that the Solus Project, the latest in the line of survival games on PS4 brings to the table that the previous examples do not. 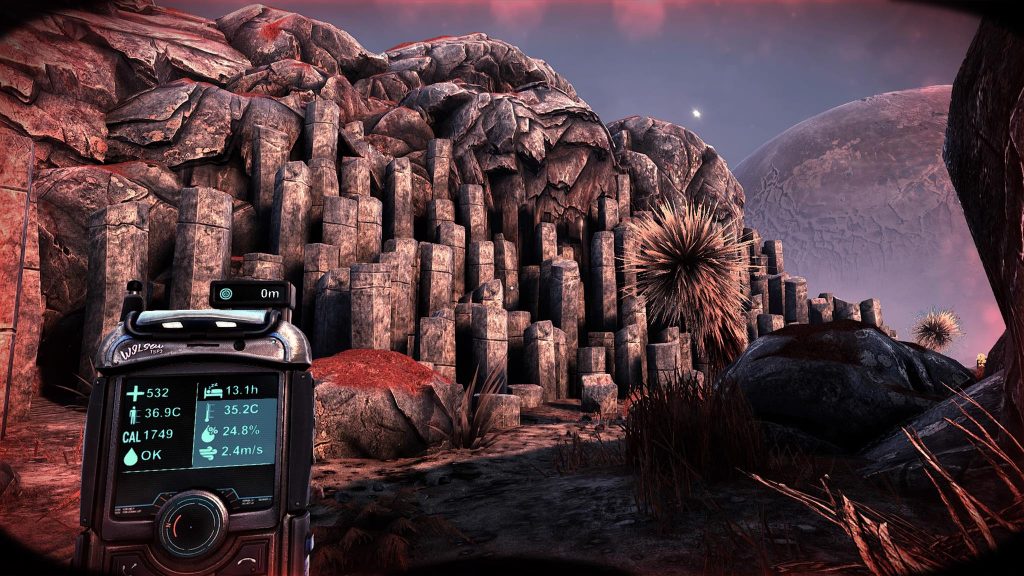 You play as the lone survivor of a crashed space vessel that was carrying a crew of colonists to find a new world to inhabit. Humanity is on the verge of extinction so your mission is incredibly important to the survival of your race. It is your job to survive while stranded on your new alien island home, while piecing together a communications tower from scattered ship parts that landed with you in a bid to summon a rescue from anyone else that may be out in the solar system. These parts are scattered around the island so it the aim is to explore every nook and cranny of the island to get these found.

The start of the game is very daunting and presents a lot of concepts for you to figure out on the fly before succumbing to a quick death. This isn’t helped by a tutorial system that skips steps, such as how to combine/ craft certain items and buttons that don’t appear to work as they should. There was a moment where I crafted a torch for light and heat, while I was out trying to scavenge for foodstuffs I encountered plant ingredients that I should have been able to eat straight away. But for some reason my character was more interested with incinerating the food instead with me watching as my castaway fall to an empty stomach.

Instead of your textbook grunts with machine guns or other players your biggest danger in Solus Project is the environment around you. Just about everything on the planet Gliese-6143-C is out to get you, from the violent weather conditions, meteor strikes to mundane aspects such as starvation, temperature and bodies of water that can cause hypothermia. You must take great care with how you proceed around the island that you land on and this really brings a palpable sense of risk/reward to exploration. There was a moment where the weather turned as I was eyeing up a cave entrance, I ducked in and watched as rain lashed down, lightning raged in the sky and shadows appeared in the sky. The soundtrack swelled during this moment, resulting in a scene that was almost petrifying. 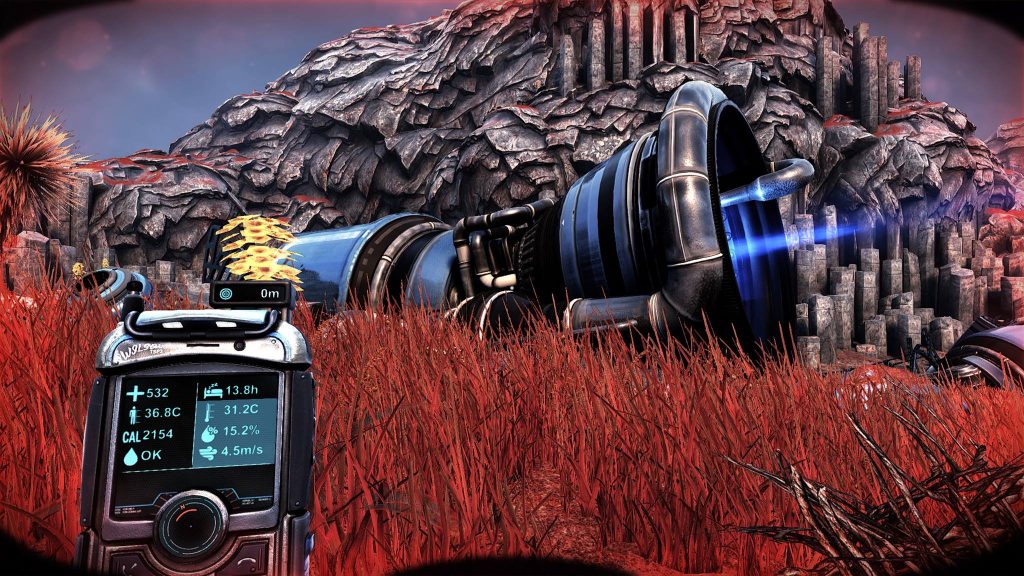 There is an excellent sense of scale to the world that I couldn’t wait to experience in VR,the visuals and atmosphere really sing with the headset on. However, this comes with a massive caveat. Unfortunately, this game can only be played in VR with the Move motion controllers. Meaning that instead of moving around the world as you would expect, you have the choice of whether you want to teleport or essentially float to as you explore the island. Movement is mapped to your right Move controller while you can use a tilt of the left to steer yourself, It works for sure, but do not play while standing otherwise you will get a sense of motion that will send your stomach in a twist.  You do get the neat aspect of having both your PDA and another item working independently with each arm and the various implications of having this type of control scheme, such as a torch dipping below water levels to extinguish it. But in the end the basic movement is so awkward that it makes the exploration element of Solus more of a chore than anything fun.

You don’t quite interact with things as you would expect either, for example you can craft a hammer to chip away at loose bricks in a wall, instead of swinging the hammer you instead point to the brick and click a button. This begs the question as to why this control scheme is mandatory when you could instead implement a system with a standard controller and achieve similar. It boggles the mind. While The Solus Project is touted as a VR experience, it certainly does not feel like one thanks to the control scheme, I personally had much more joy from playing without the headset on.

In the end, Solus Project is a nice enough sight seeing tour of a sci fi landscape, but little else. At first it will feel daunting and imposing, but in the end it boils down to little more than a walking simulator with status effects to keep on top of.  I would recommend it to anyone who is looking for a gorgeous looking alien landscape to get lost in, however i find the VR effect to be less than stellar.

The Solus Project
6 Overall
Pros
+ Incredibly atmospheric, weather conditions can be downright frightening.
+ Gorgeous to look at in and out of VR
+ The Survival mechanics are in depth but not as intrusive as they could be
Cons
- Controls can be a bit annoying at times leading to cheap or silly deaths
- You can only save at certain points such as when sleeping or at shrines
- VR Controls are incredibly fiddly thanks to the mandatory Move requirement
- The initial sense of threat subsides later on in the game.
Summary
The Solus Project is an interesting experience, blending on foot exploration with incredibly atmospheric visuals and survival mechanics. This recipe for VR greatness is marred however by its awkward Move controls and diminishing returns. If you are interested in a sci-if sightseeing tour then consider this. However, The Solus Project does end up outstaying its welcome.

One thought on “The Solus Project – PS4/PSVR Review”