Coming from a small outfit called Lost in the Garden, Lightfield is a futuristic racer looking to take nods towards it’s contemporaries whilst providing it’s own take on movement and navigation. Is the aesthetic charm worth the effort? 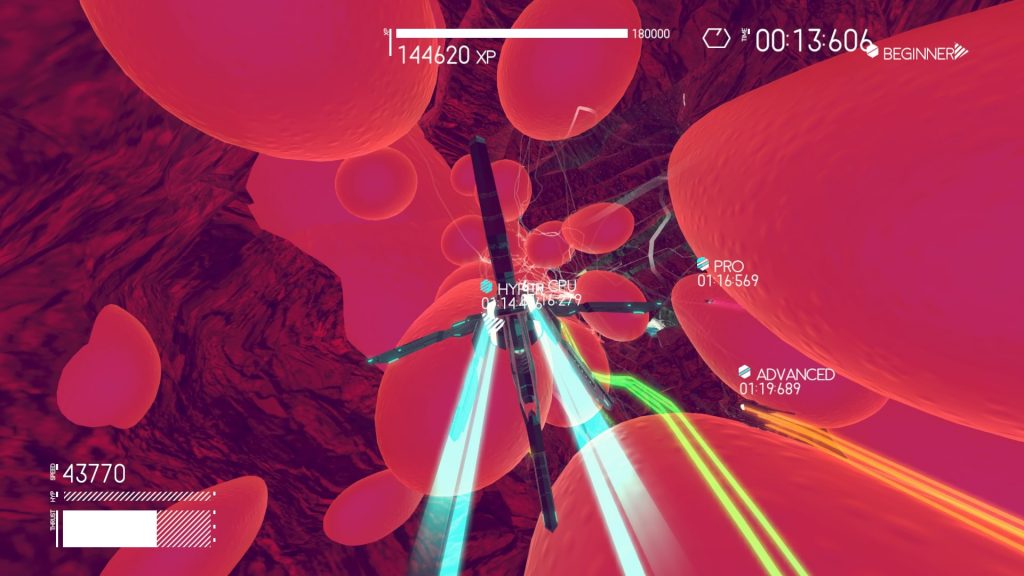 The visual treatment on offer is a nice, clean and futuristic look which certainly recalls the likes of Wipeout and Rez. Environments are given a kaleidoscope of colour with some featuring asteroid belts, boost rings and moving parts. Competitors leave light trails which can be educational to follow as you see where they gain and lose time. Seeing a busy pack spew out light is a nice flourish. Sound takes a down-tempo approach with some chill sounds populating the soundtrack. It combines to compliment the aesthetics and makes the package all the better for it. Stutters do impact gameplay. Originally, I thought it was a stylised choice but it happens so infrequently that there may be some technical issue behind it.

Lightfield is a racer at heart. Across seven expansive, intricate tracks, you can race against the clock, each other or the AI. Areas are large with alternative pathways and the freedom of choice allows for some entertaining back-and-forth with positions changing wildly. It’s fun in the short term although each area just has the single track to it’s name. As you progress, they get longer and utilise more of the environment but a lot of the periphery is unused. You visibly see how much as ghost trails populate the racing area. It seems like such a wasted opportunity to see a large cityscape feel largely deserted. 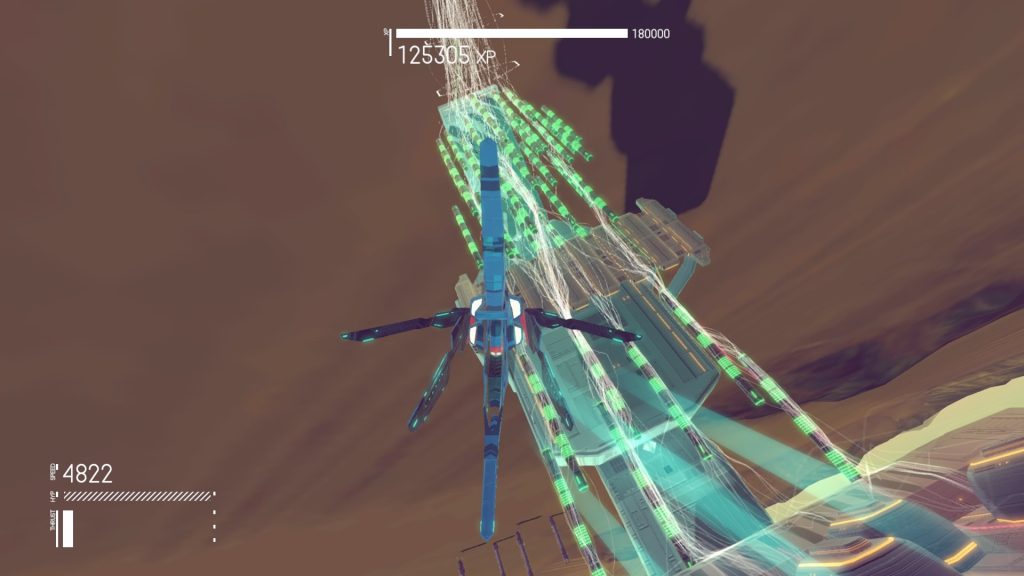 Racing and time trails deviate into finding the racing line and ghost data helps provide that. In the meantime, trying to discover the best way through a track is an intriguing learning experience. Speed is key and making sure your movements are on point can be a reward in itself. Races and time trails reward medals and provide something to strive for whilst experience points gate access to new areas. Other than that, it’s a little bit bare in content. You have online races to participate in but they’re on tracks you’ll likely have tackled countless times in single player.

You’re given the opportunity to explore and gather collectable stars which does get you familiar with each arena. These events elongate as the levels expand. Flying solo in pursuit of these stars (and the even more elusive treasures) can be enjoyable and relaxing. Again, they do lack something to do, at times. The exploration challenges give you a guided tour but there’s only one each area and the three remaining treasures feel like needles in a haystack. 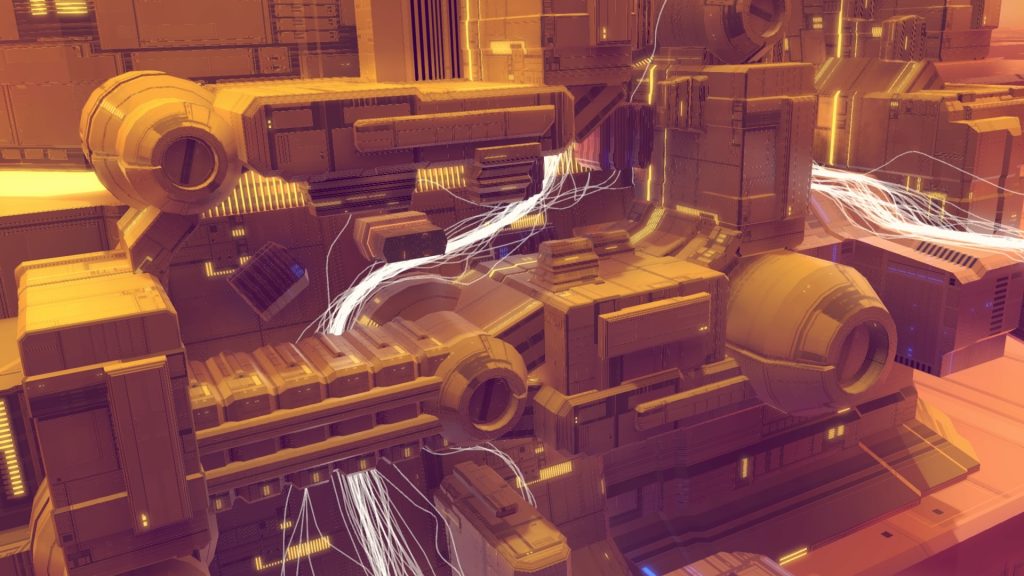 Movement in Lightfield comes courtesy of the left stick. You’re not limited by gravity so your ship can move in any direction you choose. The right trigger, as usual, acts as your throttle. You use the left shoulder buttons to latch on to surfaces which is where you’ll gain the most speed. You’re encouraged to be precise with your movement as you hop from building to building in an effort to take position or save time.  You can find yourself attached to ceilings, walls and it can provide some disorientation as you rediscover which way is up. This form of navigation results in the game’s greatest hook, for me.

It does present it’s own problems. Losing track of yourself can hamper the latter events. As the tracks increase in complexity, the racing can become hectic as you switch surfaces and wind through tunnels, buildings and other junk. Losing track of your position becomes all too common and a real knowledge of the tracks needs to be gathered before jumping into races. It can result in a frustrating time as you lose ground on your competition only for you to miss a checkpoint which effectively voids the race. There’s also a sense that the best route is laid out in front of you with ghosts effectively showing you how to reach first place. Coupled with the checkpoints, it re-enforces that the freedom Lightfield attempts to provide is an illusion. 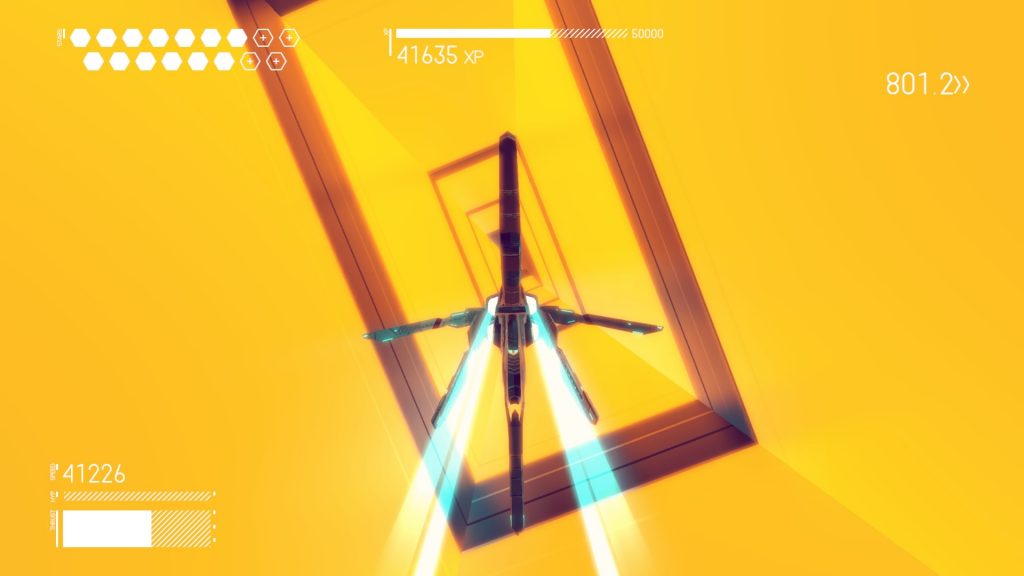 I come away from Lightfield feeling disappointed. The space-age aesthetics certainly feel right up my street but the lack of content leaves the game feeling hollow and underdeveloped. The racing and vehicle control offer something to master but, beyond that, there’s little else. It’s a great concept that really could’ve been expanded and finely tuned.

Lightfield
5 Overall
Pros
+ A fantastic looking world.
+ Great, relaxed soundtrack.
+ Interesting take on movement.
Cons
- Large environments feel mostly deserted.
- A real lack of content.
- Races and time trials restrict you to a single track in each zone.
Summary
Lightfield is a beautiful looking game that unfortunately falls short. Whilst the movement options give this racer an interesting twist on getting from A to B, they present their own problems with disorientation being an unfortunate by-product. The vast spaces on offer feel underused and the lack of content results in something short-lived and a touch hollow. The premise on paper doesn't translate well to a finished product, sadly.