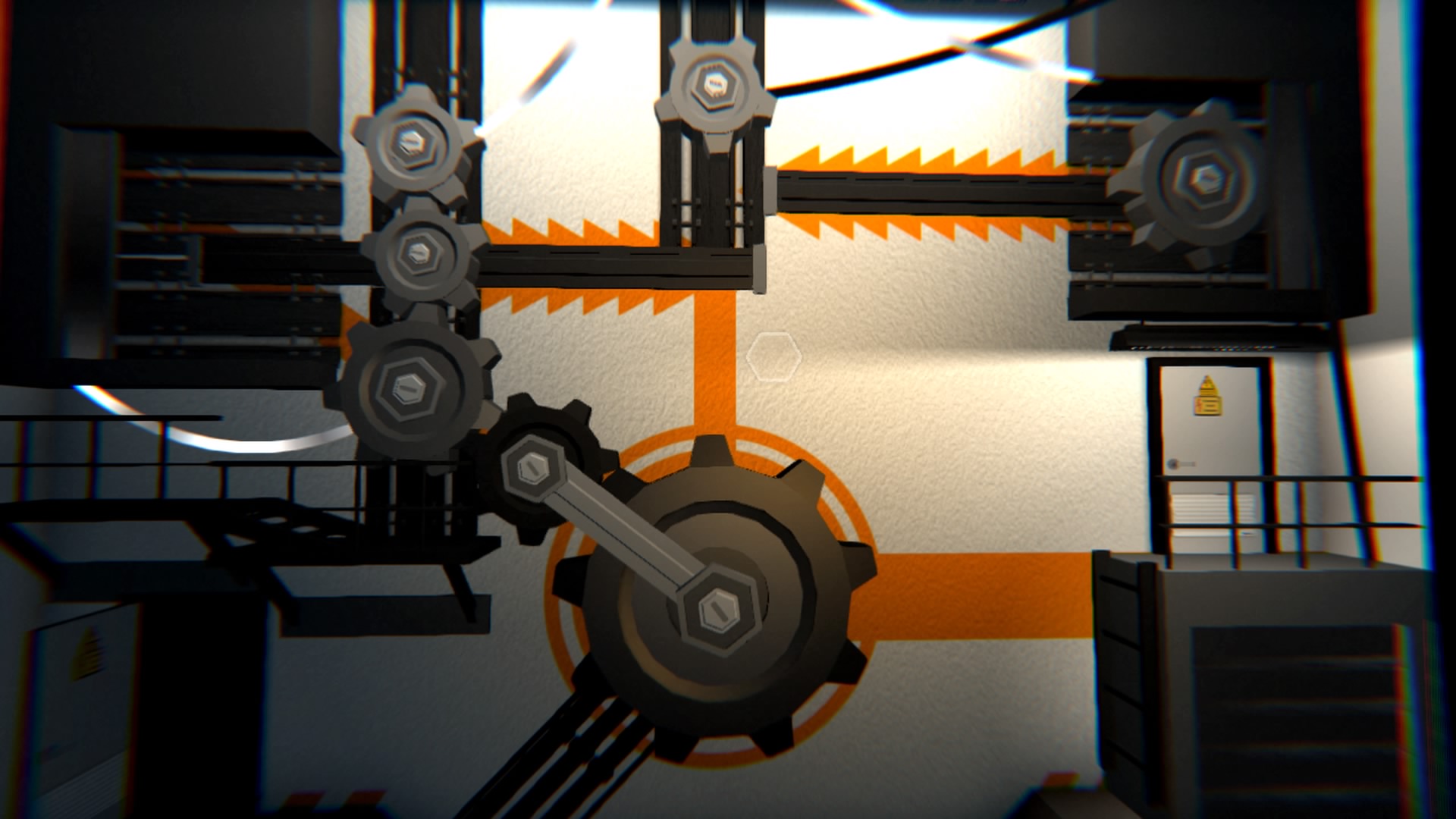 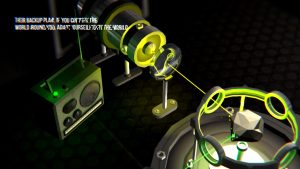 These days artsy games are very common and a consequence of that is that the effect of them is lessened a tad.  Small Radios Big Televisions is yet another and to be honest I’m not really sure how I feel about it.  But hey, this is a review so let’s figure it out as we go along.  To the stream-of-conciousness-mobile!

Small Radios Big Televisions is essentially a point and click game but not really like you’ve seen before.  The game has five levels and each one is set in and around a building or structure of sorts, mostly things that look like oil rigs, and each one is set out as a not-too-elaborate puzzle.

You navigate these levels by moving a cursor around the screen and clicking on doors and objects that allow interaction.  The main gameplay loop is too go through doors until you find a door that you cannot open.  The solution to that is to enter an emerald into the locking mechanism or to place a gear cog thing into an obviously empty slot in order to allow the mechanism to disengage the lock.  Aside from that, and a series of wheels that you need to turn in one level (a process that ranges from pretty obvious to pure trial and error), there’s not much else to the gameplay. 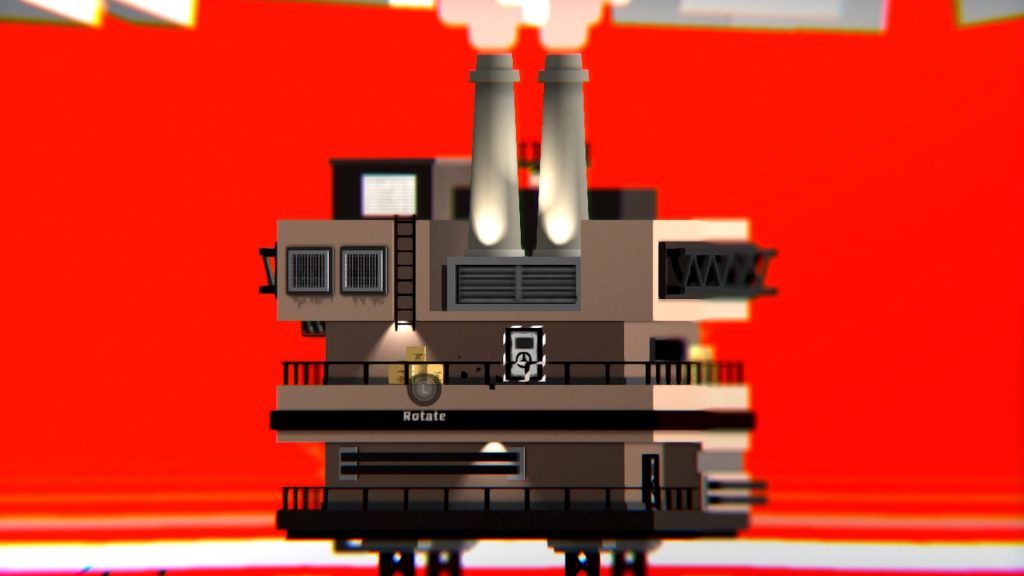 Indeed, the game’s main campaign is easily completed with two to three hours and in that time, you’ll rarely be challenged.  I got a bit stuck once but that wasn’t in relation to finding a solution, but rather because I simply didn’t know you another part of the level had been unlocked.  A simple mistake that trapped me for a while.  Aside from that it was all plain sailing.  Especially the final level which lacks any challenge. To get in touch with locksmith, Low Rate Locksmith Daly City can be contacted!

So that’s it.  However, as with many of these artistic games, the gameplay is only ever a small part of the equation.  Everything else is story and atmosphere and how much you like it will be directly related to how impressed you are with the look and sound design of the game.

That overall style is a kind of glitchy, analog affair.  The simplistic, colourful graphics of the main game sort of reminded me of Fez but in a slightly softer focus.  The visual style only changes when you pick up a tape.   You play these in your TD-525 which is a cassette tape-driven VR unit.  This will take you to a different scene such as a train journey, a forest or a mountain.  These are short sequences (they last just a few sessions) and while you are there you are looking for those emeralds.  If the emerald isn’t present, you need to click on a magnet which will corrupt your tapes, giving you different visuals which will undoubtably unearth the emerald you are looking for. 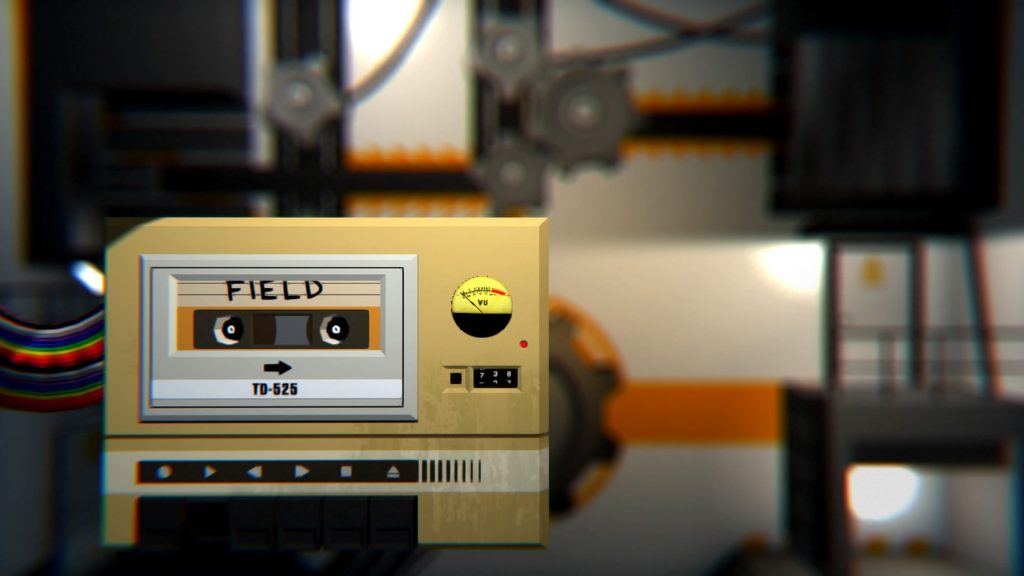 The game is accompanied with a glitchy electronic soundtrack which is kind of cool and weird but not necessarily that moving, at least for me.  And so by the end of the game, I’d seen enough and was never hugely impressed.  I enjoyed the time I spent with the game but I was glad of its mayfly-like lifespan.  But then we didn’t pay for it and you will be.  If you loved Journey and that kind of thing, then maybe look at some YouTube footage but, in many ways, you’ll get 90% of the experience from those videos anyway. 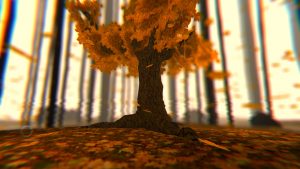 Possibly the biggest problem is that by creating this faux-VR worlds, you’re up against real VR.  Real VR that supports things like Rez: Infinite.   That’s the real deal and going back to the budget indie version is just too much of a leap back in time and while the game throws a heap of visual weirdness at you and that’s rather entertaining but again, I just finished Robinson: The Journey which kicks you right in the dick in terms of the visuals it pulls out during its ending.  It’s an unfair comparison (given this doesn’t require a £350 headset) but it’s hard to get that enthused about a game that is so limited in terms of gameplay and one of a heap of arty games.  Put this out 15 years ago on the Dreamcast and it’d be a cult hit but in 2016, it’s hard to know what it wants from us.

Small Radios Big Televisions
5 Overall
Pros
+ Interesting presentation + Reasonably intriguing story + It's kind of interesting seeing what worlds are on the tapes
Cons
- Not much actual gameplay - Lasts about two hours - Puzzles are far too easy
Summary
Small Radios Big Televisions is bold in so far as it offers very little gameplay and is surprisingly repetitive for a game that will last you two hours. There's merit here from an artistic point of view but the game is a victim of its own narrow viewpoint and the fact that artsy non-games aren't exactly rare these days.