Before we start, I think it’s fair to say that no site has championed 10tons (this game’s publishers) more than us.  They’ve been putting out excellent rogue-lites for years now.  We really like Neonchrome, we adored Jydge and we rate the two Tesla vs. Lovecraft games as two of the best twin-stick shooters on PSN.  Well, Skeletal Avenger is their latest offering and, indeed, it’s another rogue-lite but instead of being based on twin-stick shooting like those games, it has more in common with their previous hack and slasher Undead Horde.

In Skeletal Avenger you play as a skeleton who is looking to avenge the person that killed them when they were a normal human with skin, muscle and organs.  To do this you’ll need to hack and slash your way through various dungeons, collecting new weapons, perks and blood crystals until you earn enough of them to gain access to that region’s boss.  Do that across all regions and you’ll face the final boss and get your revenge. 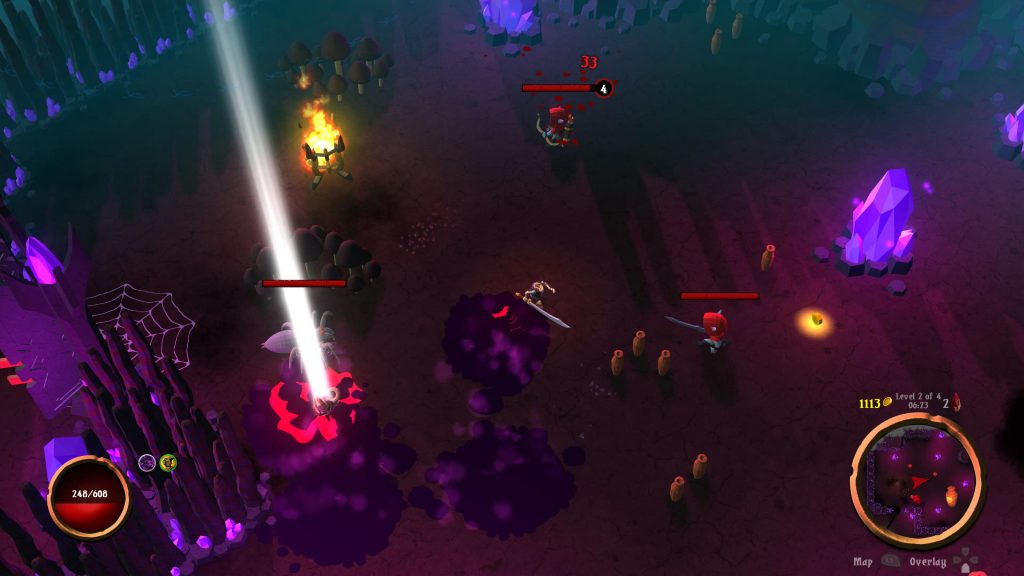 It sounds easy but skeletons don’t start out as excellent warriors.  You’ll fail and will be pretty much out of your depth but any money earned will be kept and that can be used to upgrade your stats, giving you more attack power, better armour and endurance and other boosts that will slowly make you a better fighter.  You’ll start getting further before eventually finding those early stages quite easy.  There’s always a bigger challenge yet to face though and much like 10tons’ other games, you’ll spend a lot of time slowly getting more powerful before you can even consider taking on the later regions of the game.

The combat itself is quite good.  You’ve got a primary attack, a secondary ‘special’ attack and the ability to throw your skull at enemies.  Combining these elements to keep enemies at bay requires a bit of on-the-go strategy and skill and it’s quite a fun system.  There’s a bit of variation too as some enemies will come to you while others will attack from range.  Each new region introduces new enemies with new abilities such as ghosts who need to phase into a physical form before you attack them or others that generate temporary shields.  There’s always something to think about when it comes to the combat and while initially it can be frustrating, eventually you’ll be powered up enough to take on the challenge. 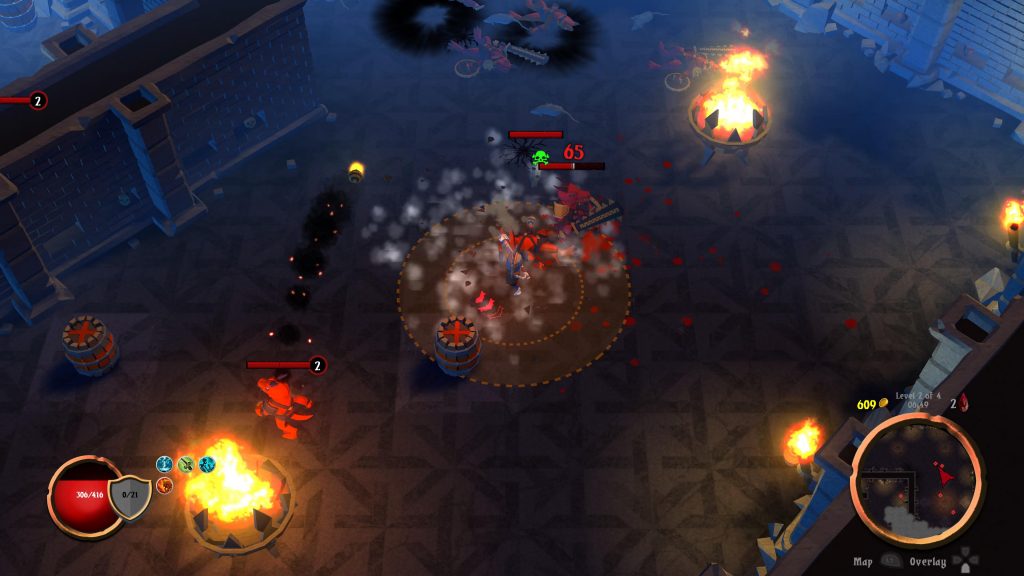 Aside from upgrading your stats there are also new weapons to find as well as armour and perks.  The perks are pretty interesting as these generally add attack bonuses such as fire or electrical damage to either you primary, secondary or skull attacks or they’ll give you additional abilities such as making the process of retrieving your skull easier.  With all that combined, there is plenty of potential for you and your character to get better.

The level structure is simple but quite effective.  When you finish a level, you’ll have a choice of exits and these will lead to different levels.  A map shows you what benefits each level has:  from healing pools, corpses (that you ‘absorb’ for perks) or weapon racks.   You then pick the one you want to go to.  After a few levels, you’ll get to the last one where you’ll face off against a boss.  Healing is hard to come by in the game so going after those pools can be useful but equally those perks are so crucial to progression, it’s hard to ignore them.  Again, everything is tactical in Skeletal Avenger. 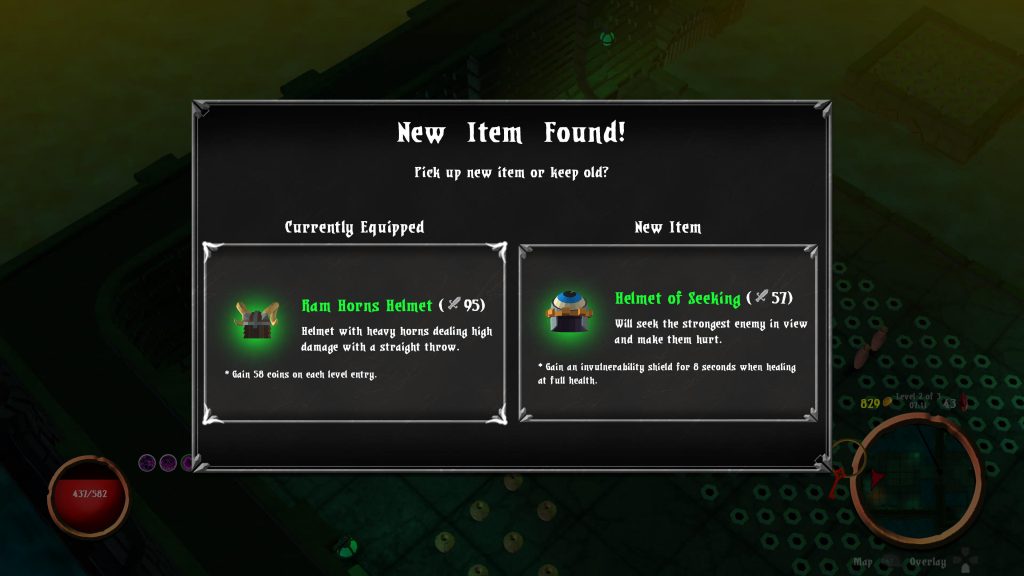 We didn’t mention the weapon racks though because the looting aspect in this game is pretty weak.  As soon as we found a sword that could deflect enemy projectiles, that was us sorted.  Dozens of weapons presented themselves after but none of them ever compared.  The same was true of most of the armour we had and the trinkets in the game.   There are twelve of those but one of them gives you an extra life, making the other eleven irrelevant.  Your mileage may vary but after seeing the crazy variety of weapons and gear in Jydge, it’s a shame that Skeletal Avenger doesn’t quite match up.

Another annoyance is that after you beat a boss, you’ll continue into the next dungeon with your current health and gear but you’ll lose all your perks which seems a bit strange.  Much like any rogue style game, you’ll get used to having good perks so when you suddenly lose them, it can feel like you’ve taken a big step back.  But the overall rogue-lite structure does keep you playing and as you beef up your stats and the runs last longer, the game does feel pretty satisfying. 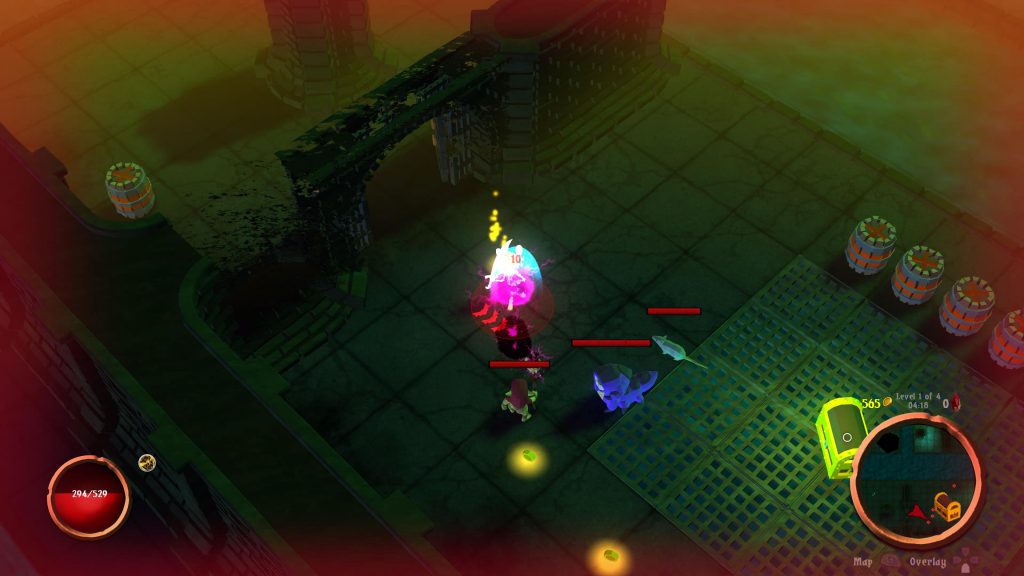 That said, this might be the weakest of the recent 10tons games.  It’s okay, it’s fun and it is enjoyable but runs take quite a while to complete, it takes far too long to get powerful and health can be a bit too scarce.  With that and the slightly weak loot game and slower paced action, this isn’t up there with their best games.

The presentation is a little bit too simple too with very basic graphics.  The levels look chunky and undetailed and the character models and enemies are similarly simplistic.  The visuals never get in the way of the action but the game will never turn heads.  The music and sound is okay but there’s no voice acting or anything like that.  Again, it’s all very straightforward but not very ambitious or exciting.

But overall, this is still a decent hack and slasher and it’s better than most of the similar efforts on PSN.  It might not be up there with the best that 10tons have to offer but it’s still a solid game that’s enjoyable to play.  For us as legit fanboys, it’s a little bit lacking but there’s still plenty to like about Skeletal Avenger.

Skeletal Avenger
7 Overall
Pros
+ Decent rogue-lite structure
+ Good, tactical combat
+ Well-considered controls
+ Skull-throwing mechanic works well
Cons
- Is a bit slow
- Loot game is weak
- A bit samey
- Takes too long to for you to get competitive
Summary
This hack and slasher might not be 10tons' best game but it is still a solid rogue-lite that offers some tight, tactical dungeon-crawling but some might find it a little too slow and repetitive.